Dmitro Yarosh is not radical enough, so the Right Sector continues to fight without him.

November 13 2015
59
Unbelievable, but it is a fact! Dmitry Yarosh is no longer the Right Sector Explorer. From now on, the lead of PS to the victory of their ideas will be other people. What happened inside the PS that caused such epochal changes? Frankly, I had to dig a lot on banned sites, including PS. And so what picture has opened. 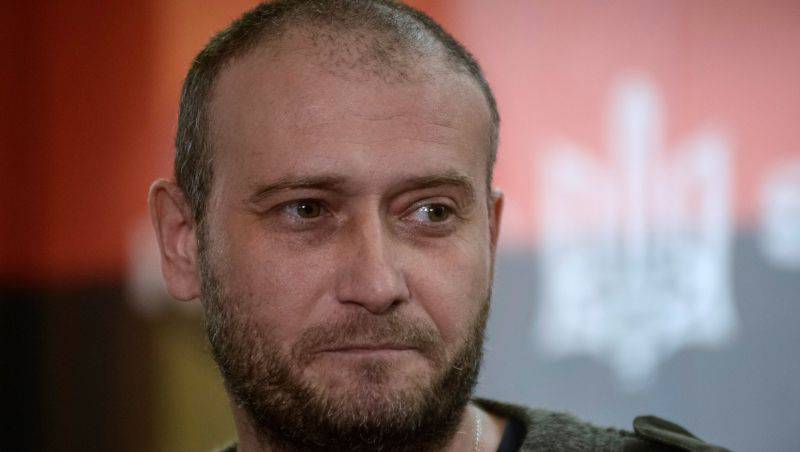 Indeed, November 11 Dmitry Yarosh said that he resigned from the PS Explorer. Independently and unilaterally.

This event was preceded by the activation of the leading ghouls of the Right Sector, aimed at countering the "negative trends in the development of the movement." A collective letter was written to Yarosh, which outlines the main problems of the Right Sector National Liberation Movement, above all the departure from the revolutionary strategy.

During a meeting with Yarosh on his initiative, it was decided to hold a conference. Its backbone consisted of the commanders of combat units and spare battalions of the DMM, the leaders of regional organizations and structural units of the PS.

The conference was held on November 8 near Kiev. Surprisingly, Yarosh did not take part in her work. The Conference unanimously elected the Conductor of the whole movement (by that time, only the Conductor of the Party was active). If translated, the Traffic Explorer is like the executive committee. A Party Conductor - District Committee. Something like this. So, Yarosh and was a conductor of motion. Accordingly, the main "hitting" went in his direction. Say, did not do anything.

The conference also developed strategic movements, the main of which were:

1. The non-recognition of the gangster regime of Poroshenko as a legitimate authority.
2. There is no alternative to the revolutionary path of struggle.

And then miracles flew. Even more wonderful than the paths and programs adopted at the conference.

The Wire of the National-Liberation Movement, headed by Dmitry Yarosh, was elected unanimously, who should be responsible for the work of all structural units of the movement and for the effectiveness of the nationalist struggle. The Wire included: Andrey Stempitsky, Andrey Tarasenko, Yuri Paliy, Arseny Bilodub and Vasily Labaichuk.

After that, apparently, it was the elected participants of the Wire that went with resolutions to the chief conductor. To Yarosh. What happened there is somewhat incomprehensible. But Yarosh resigned. Here is what is published on his website:

"After the conference, individuals managed by their own mercantile interests, ambitions, and perhaps ties with the special services, did everything to set D. Yarosh to reject the conference’s decisions and reject the revolutionary strategy. This circle of people had long been matured in the ranks of the movement, and resorting to servility, intrigue, the spread of gossip, tried to influence his policies. It was the activities of these individuals that led to a situation in which D. Yarosh must resign. "

A curtain? But sorry, this “circle” was sort of chosen at the conference ... Strange things are happening in Ukraine.

And then one of the guides came on the scene. Andrey Tarasenko. This is exactly the same "Party Conductor", which worked, in contrast to Yarosh. And he began giving interviews worse than Nuland cookies at one time.

In general, the interviews seemed to be about nothing, but one of them flashed on things that made me, as a person knowledgeable in the affairs of the outlying ones, not just made me think. That's what answered the questions of the "Focus" Tarasenko.

Convening a conference of the leadership of the Right Sector and the election of a new organization Wire was agreed with Dmitry Yarosh?

- Of course. Moreover, it was his initiative.

Why did he not come to her then?

- He explained this by saying that he did not want to influence the decisions of the conference.

Then who participated in the conference, and why Yarosh in the end did not recognize her decision?

- There was almost the entire party Wire, almost all regional leaders, representatives of the reserve battalions, combat units, etc. We chose a new Wire PS led by Yarosh. After that, a certain group of people went to him. It is not known that they advised and told him there. Probably all twisted. In the end, he made the decision that he made.

Who is this "certain group of persons"?

- I would not want to name them yet. When it is necessary, everyone will know everything.

Is the right sector threatened to split?

- The care of one person is definitely not a split. I do not know yet that someone should follow Yarosh.

Who can become the new leader of the PS?

- New Wire, elected on November 8, will continue to work. The question of who will lead him, now is not worth it. We are going to hold a meeting, where we will invite including Yarosh, and we will continue to be determined with our actions.

This история somehow affect the strategy and tactics of the PS?

- I am sure that will affect. How exactly, I do not know.

And yet, is this conflict more likely an ideological or consequence of someone’s intrigues?

- Worldview. Yes, we decided to work in a revolutionary way.

Several answers to several questions, but how many conclusions ...

1. In the PS itself there was a certain split. And Yarosh was in a clear minority.

2. Most of these guides are for the further radicalization of the SS and the intensification of confrontation with the authorities of Ukraine.

3. The revolutionary path of struggle (if you take the other speeches of the same Tarasenko) is the willingness to speak out at the seizure of power at the most convenient time for this. But it is a matter of time to oppose the existing government.

And the most important conclusion. Yarosh turned out to be less radical than what was expected of him. Moreover, recently began to appear attacks in his direction on the topic that he is working with the junta Poroshenko. With the SBU. And, it is terrible to think, even with the special services of the Russian Federation. Like this.

Of course, no one will be crying about the resignation of the former PS Conductor. It's all clear. Yarosh turned out to be more intelligent and shrewd than his colleagues. And realizing that the paths chosen by his party comrades would lead him to less comfortable conditions, Dmitri, roughly speaking, dumped the topic.

Good move. The course of a reasonable player soberly evaluating their capabilities.

Now, of course, the dogs will make a big fuss about attracting new fighters into their ranks. DUK (Volunteer Ukrainian Corps, combat unit PS) shakes weapons. And then a response from the authorities will definitely follow. For the SBU still have intelligent people who are able to read and listen to the speeches of the same Tarasenko and draw conclusions. They will not be able to - the men in the cartoon will tell.

But just to endure such a crowd behind their backs willing to arrange a "ryvalyutsiyu" and sit on the power hardly anyone wants.

So this is a saying, a tale about pravosekov still ahead. And we will observe it from the second row. So safer. And from the first let him look very intelligent man Dimitro Yarosh. Although I would see him on stage with great pleasure in the play "The End of the Last Pravosek." But I think this is also a matter of time.

Ctrl Enter
Noticed oshЫbku Highlight text and press. Ctrl + Enter
We are
Memory sake. In the Donetsk Museum of the Great Patriotic War, a diorama of the battle at Saur-Grave openedSituational analysis of the death of the MH17 flight (Malaysian Boeing 777), made on the basis of engineering analysis from 15.08.2014
Military Reviewin Yandex News
Military Reviewin Google News
59 comments
Information
Dear reader, to leave comments on the publication, you must sign in.