Swan, crayfish and pike in Moldovan

November 13 2015
22
Protests continue to fever Moldavia. At the same time, the peculiarity of the actions is that their participants, regardless of the political color, their main goal is to immediately dismiss the current authorities. The authorities are not satisfied in any way, as it has been breaking contacts with Russia all the time, only the annual remittances from which Moldovan migrant workers make more than 1,5 billion euros. Others do not consider the authorities of Moldova to be well-off, as the country has not yet been integrated with the European Union. The third is not satisfied with the fact that the official Chisinau is not in a hurry to accept the “decree” on the “salvific” entry of Moldova into Romania.


The activists of the center-left "Our Party", whose leader is a man named Renato Usaty, picketed the residence of President Nicholas (Nicolae) Timofti under the anti-government chanting (and the ministers of the government in Moldova for some time now "walk" with the prefixes "acting") slogans.

A short list of slogans of "Our Party" is as follows:

cancellation of increase of tariffs for electricity,
reduction of gas tariffs;

the resignation of presidential authority by Nikolai Timofti,
holding early parliamentary and presidential elections, with a popular vote (now, according to Moldovan laws, the president is elected by the parliament). 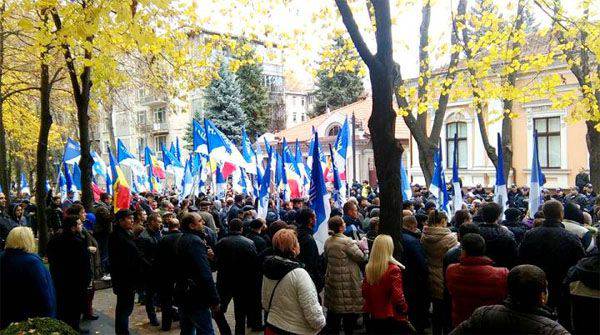 From the speech of the representatives of “Our Party” in the center of Chisinau (quoted from the party website of Renato Usati, who heads the administration of the city of Balti):
The president has time to hold meetings with the ruling parties, but he does not even find a few minutes to come to us and enter into negotiations with the protesters. Moreover, the results of the latest opinion poll show: “Our Party” is leading in political ratings, and the majority of Moldovan citizens want early elections! It is Timofti who is personally to blame for the increase in tariffs and impoverishment of the people, because he is part of the ruling regime. He covers the oligarchs who rob people and squeeze out his last strength. People do not have the opportunity to pay for electricity and gas, and the rulers are not enough!

Timofti is guilty of inaction, because he is reported on crimes that are happening, but he does not do anything to stop this criminal lawlessness. We have gathered here to show Timofti, he will not have peace until he resigns. We demand early parliamentary elections!

Video materials about the protest action organized by the mayor's party (head of administration) of the Balti city in Chisinau:

In the European Union, without much enthusiasm (they themselves have problems above the roof), they commented on the protest action in Chisinau, saying that Moldova should follow the path of creating a government of pro-European unity. At the same time, former European Commissioner Stefan Füle wondered what the pro-European government is in Moldova, which is not ripe for full European integration and cannot cope with its problems.

These statements were commented by Renato Usatii, who represents the opposition to the current Moldovan authorities:

Stefan Füle asks what a “pro-European government” is. One feels that he knows the Moldovan answer to this question. The “pro-European government” is the one that will steal under the guise of EU flags. But doesn't the EU suit it? Did the EU only today understand why the Moldovan oligarchs have slogans for European integration? They understood everything a long time ago, and even sometimes, like, for example, now, they do not stand up, and they start talking. But continue to endure, as long as our gangsters did not go to theft under other flags. They understood everything, but cannot and do not want to do anything about it. Only we ourselves can save the country from bandits.

In an interview with the Russian portal "Sight" the leader of the opposition Moldovan party, answering the question about the protests and patience of the Moldovans, said literally the following:

People just take a pitchfork - and it's over!

Against this background, protest actions are held in Chisinau by those who are in favor of Moldova joining as soon as possible not just in the European Union, but in ... Romania - as one of the provinces. Several hundred people (mostly young people) came out under the flags of Romania, chanting: “Unite!” And “We want Romania and Moldova to have one government!” 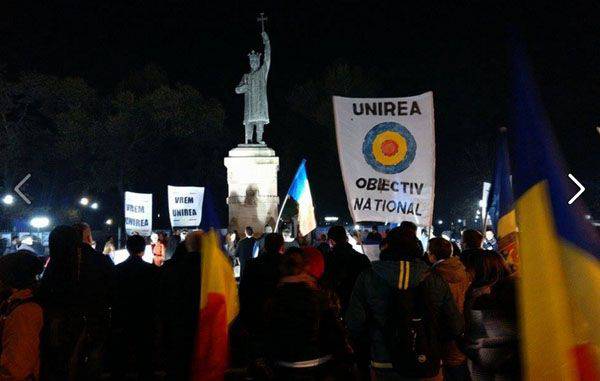 Although if we take into account that many representatives of the Moldovan government, including the judiciary, have Romanian passports in their pockets for a long time, then “one government, in fact, already exists ... Unless, informally ...

At the same time, rallies are held in other Chisinau venues in support of European integration, but without slogans about joining Romania, but also with slogans about the resignation of the current president.

If you try to formulate the essence of the processes in modern Moldova, it is just perfectly described by this photo taken by one of Twitter users in Chisinau: 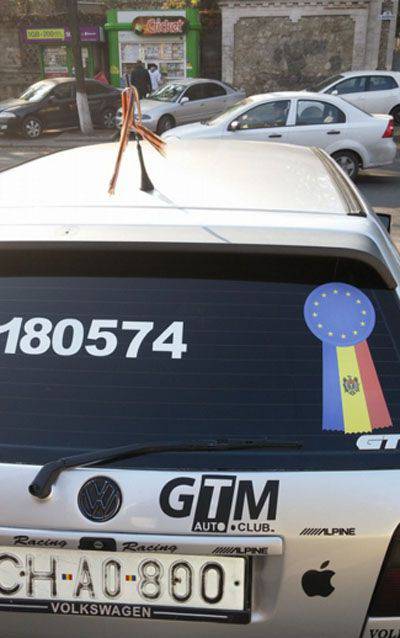 Here, as they say, a real explosive mixture: from the logo "Apple", the flag of Moldova and the EU to the St. George ribbon. Apparently, a person is in a waiting mode regarding who will take it in Chisinau, in order to get rid of the “wrong” symbolism ...

It would seem that in this leapfrog, the Moldovan current authorities need to think about preserving the country, because, in fact, Moldova has long been split into pieces, and this split is only getting worse. However, instead of trying to find at least some compromise, those wearing the “acting” prefix suddenly decide on frankly radical statements. Thus, the Acting Minister of Defense of Moldova, Anatoly Salaru (he is the first deputy head of the Liberal Party of Moldova) announced that the country must immediately abandon its neutral and non-aligned status in order to soon become a member of NATO.

Mr. Salaru announced that the neutral status of Moldova allows Russian troops to be present in Transdniestria and (attention!) To wage (against Chisinau?) "Hybrid war." And about. The head of the military department believes that it is necessary to take as an example the experience of Ukraine, which has refused its non-aligned status, and now moves in "leaps and bounds" into (no, not where many have thought ...) the North Atlantic Alliance.

It seems that Mr. Salaru, as they say, blurted out, not wishing to think. After all, any step taken by Moldova in the direction of NATO will lead to the simultaneous withdrawal (on the most legal basis) of the Transdnistrian Moldavian Republic and Gagauzia from the country. If Salaru does not understand this, then what kind of minister is he, then? If he understands, then for Moldova he is a state criminal at all, who is still in power.

Considering the fact that in the West, Moldavians pay a little less attention than not at all, the current authorities in Chisinau have a really slim chance of staying in their seats.

Information for Moldovan thinking: in the east of Moldova there is the Eurasian Union with its gigantic market and enormous potentials, and the people in the union are not strangers at all ...