November 13 2015
8
Continuing the stories about the military childhood of boys and girls of the Lipetsk region, today we will focus on the Mokhov brothers, born in the Stanovlyansky district (during the Great Patriotic War, this area was part of the Oryol region, since Lipetsk did not exist then). Unfortunately, about two years ago when replacing a computer, I lost some of the photos, among them was a picture of the Mokhovs. But история These children are an example of courage, courage and faith in our victory. 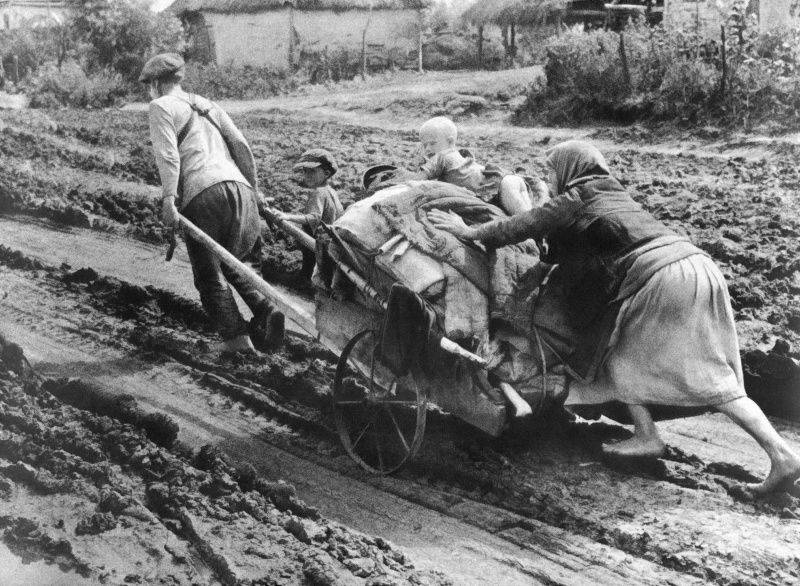 They say all the peas in the same pod are the same. Here are four Mokhov brothers were similar in face and character. And they even called them “in the order of the alphabet”, although this did not work out on purpose, but by chance: Arkasha, Boria, Volodya and Gleb. They look alike, but the fate of the brothers, as it should, has been different.

Twenty-year-old Arkady on the third day of World War II went to the front. And very soon he went missing. As it turned out later, this happened after the first battle, about which the son managed to write to his mother. Boris, Volodya and Gleb, too, were eager to fight the fascist evil spirits, but the mother did not let in - the boys were still! Yes, and help not only at the front was needed. Virtually without male power left a large collective farm. Let the hands of the guys are still inexperienced, but the war is stricter than any teacher to attach any case.

In the autumn of 1941, the news flew through the village of Berezovka of the Stanovlyansky raon like a hawk: the fascists came close. Our fighters will not hold them. Too much strength comes, battles are unequal.
The evacuation of collective farms of the region began. In a hurry, cows, horses, small cattle were taken away. Varvara Fyodorovna, the mother of the brothers, disappeared for days and nights at the pig farm. And she instructed her sons to help other collective farmers to take care of the hay, which had been laid up at the end of summer. After all, to save livestock from fascists is only half the battle, animals need to be fed before the first grass. And the year was fruitful, all over the village, like mountains, stood high stacks.

... Early in the morning the Mokhovs loaded the last, fifty-eighth stack onto the old cart. Fifty-seven of his “brothers” were already taken by the guys to the village of Yablonevo, Krasninsky District. At first they drove together with the adult collective farmers, and when there were only a few stacks left, they were already alone - they were doing well, responsibly and harmoniously, and the distance was not very long. Everything would be fine, but the trouble was settled - already on the way out of the village, suddenly (apparently, from fatigue) their horse fell, wheezing. It became clear that on it today they are definitely not lucky. What to do? Run for help to adults? So the main part of the horses had already been taken away, and those that remained were counted.
- Let's take a stack of yourself! - first suggested thirteen Boria.
- The thing you say! - supported Volodya. - There was one force, and there will be three. It is morning, we will leave the village, and by evening we will be there, probably.
And without further ado the brothers harnessed themselves to the sled and dragged them along behind them over the first thin snow.
Three forces, of course, more than one. But there was one horse, and there were three boyish. And the road is about forty kilometers. It seemed short on a horse, but now ... But the character of all Moss is stubborn. No wonder they are peas from one pod.

The brothers accurately calculated their forces and did not go astray. Just a little left to go. Here and the last field, landing, and behind them will be the village Yablonevo.
- Guys! - suddenly said quietly Hleb. - It seems the fascists are following us. Get down!
What is the use of going to bed? A stack is not a roadside pebble, it can be seen from afar. The guys lowered their shafts, began to listen. Only mistaken for the excitement of Gleb. Not the fascists followed them, but the dogs. In their war in the area a lot of wild. Hiding in the woods, knocking in flocks. And although the dog is weaker than his brother forest wolf, but the villagers said that the gray people are afraid and will attack only as a last resort. And the feral dog no longer has this fear of people.
The pack silently approached the guys, surrounded it. Dogs, as on selection, are lean, tall, with drooping tails.
- Go here! - loudly shouted Borya.
But the dogs were not afraid of any shouts. They figured out that in front of them were not adults, but children. Squeezed the ring more tightly. The boys looked at each other, everyone was thinking what to do.
- Fire is necessary, fire! - said Volodya. - I have matches, in case I spent the night! - and the boy turned to the stack.
- What are you? - shouted Borya. - Why did you save the hay? Fritz will not get it, but cows will disappear from hunger! Give your matches!

And desperately, as only a person can, having only one solution left and fully relying on success, Boris removed the cap from his head. Imagine: it's cold outside, the air is frosty. The cap was probably wet from the inside, because Boris was dragging a heavy load. It should not immediately catch fire. But, probably, the fate itself helped the boys at this crucial moment. Gleb struck a match - and the cap took up! Borya moved it from side to side a little, fanning the flames, then ran up to the nearest dog and tried to poke into the very face. It did not work, the dog ran off to the side. Then Borya swung and threw his cap into the thick of the pack. There was a scream, barking dogs recoiled, but they did not run far. It was no longer possible to reach the already fading cap. But while everything described was happening, Volodya had already taken off his cap and set it on fire. Following it, the younger Gleb did the same. The boys threw burning hats in a pack. The guys couldn’t leave themselves - they were afraid of pursuing the dogs. Therefore, trying to get rid of dogs. In the course went the mittens. True, they were doing worse, so the guys still stuck inside the bundle from the stack. Then they began to use quilted jackets. The brothers took off their sleeves, lit new "torches" from the old ones, and, waving them, began to attack the pack. When this did not help, Borya took off his padded jacket (already without sleeves), set fire to immediately from three sides. And in a fit of insane courage he ran straight to the dogs, holding burning clothes in his outstretched hand. But the dogs had already turned and headed away ...

Late in the evening, the frozen, exhausted brothers got to Yablonevo. Locals understood their misfortune, left to sleep, fed, gave their clothes. Who handed the children a hat, who mittens. One old man gave Bor his old jacket, which was sewn homemade warm podstёzhka. There, in his jacket, Boria went through all winter 1941-42.

Two years later, Mokhov received a letter from Arkady. It turns out that the elder brother was captured. Together with other prisoners of the Red Army, he suffered in overwork, thinking about escaping, but finding no opportunity for him. And the forces remained less and less. Then one day, the Red Army soldiers who could no longer work, the Nazis brought to the village near Smolenk (the city is inaccurate). In this village, the Germans decided to arrange a "demonstration performance." They drove old men, children, women to look at the massacre of the recalcitrant The prisoners were placed in a row near a barn, facing the wall, near which a ditch was dug. The Germans, who were standing behind them, pushed the soldiers one by one on the edge of the moat and fired. Arkady was the fourteenth in a row. Thirteen fighters were already in the pit. A fascist who was standing behind him pushed Arkady with his butt-hole to the ditch, but suddenly there was a scream from the crowd:
- This is my son!!!
It turned out that some woman was screaming with a small child in her arms. She ran out of the crowd, began to point at Arkady and shout:
- My son!! My son!!
And immediately, realizing the call, the rest of the inhabitants rushed to the surviving soldiers, hugged them and shouted:
- This is my brother! My groom! My husband!

The Nazis were confused. Apparently, their plans did not include shooting the entire village. And the situation itself was so incomprehensible to them that the Germans began to shoot in the air, and then they took the prisoners and part of the civilian population into some kind of house, ostensibly to clarify the circumstances. Probably, there would have been another massacre next - the house would have been set on fire or come up with another brutal way. But the morning the village was liberated by the partisans. And Arkady managed to meet and talk with his rescuer. It turned out that "mother" was a year younger than him.

... The three older brothers devoted their adult life to medicine and left the Lipetsk region. And Gleb Yegorovich lived for some time in the stela of Trostnoye, Stanovlyansky District. He worked as a long-distance truck driver, visited many cities. When he retired, he was happy to breed goats.

Once again from the author
I put a photo thematic. Although inaccurate, it reflects everything that has been said, but it conveys the main thing: the desire of people not to give up their goods, their courage, and their immense fatigue.
The story, very similar to the one that happened to Arkady, I met several times in newspaper publications about the war. And once stumbled on exactly the same episode that occurred in the Smolensk region. Apparently, it was about this day that there was talk.
And that's what I still think and can not understand it. After all, the boys' clothes should not have caught fire so quickly. After all, it was raw, and the time for which everything happened happened, probably measured in minutes. But I myself saw the burnt hat, which was then picked up by Gleb - more guys could not save anything, everything burned out. I learned this story from a relative of the brothers. And seeing my bewildered, thoughtful face, he told me an anecdote that had already sickened the teeth about the fact that during the war years the sine could approach the figure eight.

Ctrl Enter
Noticed oshЫbku Highlight text and press. Ctrl + Enter
We are
The story of one inventor. Gleb KotelnikovDon Service Komarich 1646 of the Year
Military Reviewin Yandex News
Military Reviewin Google News
8 comments
Information
Dear reader, to leave comments on the publication, you must sign in.