November 12 2015
105
Conceptgeneral battle", capable of bringing a one-time break in the war, has outlived itself and proved its inconsistency by the middle of the 20 century. However, the Kiev generals plan to defeat the militia in the" general battle ".


It must be said that such a battle implies the throwing into battle of the whole army on the principle "either pan or lost." it should not be confused with the battle. The battle is massive battles, attacks, strikes, characterized by the use of large military formations, capable of intercepting a strategic initiative, breaking the enemy’s army or navy in an operational or strategic direction and achieving superiority on it. Such battles can serve Borodino, Kursk, Poltava, Stalingrad and several others. With the end of the battle, the enemy has not yet been crushed, but the strategic initiative passes to the winner.

Another thing - the general battle. All personnel, all equipment and all auxiliary forces participate in it. The outcome of the general battle determines the entire outcome of the war. Thus, in the battle of Gaugamela, which was essentially a general battle, the blows of much smaller but more prepared troops of Alexander of Macedon (his army was 6 times smaller than the Persian forces numbering over 200 thousand people) and the modern Middle East immediately fell same passed under the protectorate of the Macedonians.

The Americans tried to repeat this in the war with Japan in the Pacific, but the concept of a general battle collapsed - the Japanese naval forces proved much more resilient and replenishable, and the war dragged on for three more years before Japan was able to be put on its knees. Since then, the theory of military art has eliminated the principle of a general battle, as a way to achieve instant victory.

However, the Kiev generals know the art of war, apparently, only by name. Having ditched tens of thousands of soldiers in numerous cauldrons without a single victory, the Ukrainian General Staff, under the guise of mass disinformation about the alleged bombardment of positions of Ukrainian troops by militias, continues weapon and armored vehicles to the line of demarcation.

Perhaps the generals should know that all movements and redeployment of troops assembled into a single dull shock mass, though stretched along the entire border, are carefully monitored. Over the past three days, Kiev has deployed a convoy of armored vehicles seen in Novoaydar in the direction of Happiness, and more than 30 infantry fighting vehicles with military personnel without chevrons and in balaclava drove into the village of Mikhaylyuki in the Novo-Aidarsky district. Residents of the village of Bobrovo (this is the Kharkiv region) and the village of Golubovka are tormented by the clanking and rattle of armored vehicles continuously going east, and Bulgakovka is full of Ukrainian punishers. 42 BPMP arrived in Popasna and in the direction of Severodonetsk trains with tanks on platforms. And in Shulginka, Starobelsky district, a gigantic - over a hundred - number of Ukrainian tanks accumulated. And this picture has been going on for more than a week, all the data is carefully recorded by the intelligence of New Russia and taken into account when planning.

Why, declaring the withdrawal of armaments, the Ukrainian General Staff, on the contrary, increases the grouping? Why did all the mass media of Nezalezhnaya street and night lie to the average man about provocative shelling from the DNR and LNR, when even the deputy head of the Special Monitoring Mission Alexander Hug noted in an interview with Deutsche Welle that shelling and build-up of a group of troops are carried out by the Ukrainian side, without identifying a single fact of violations by the LC and the DNI? 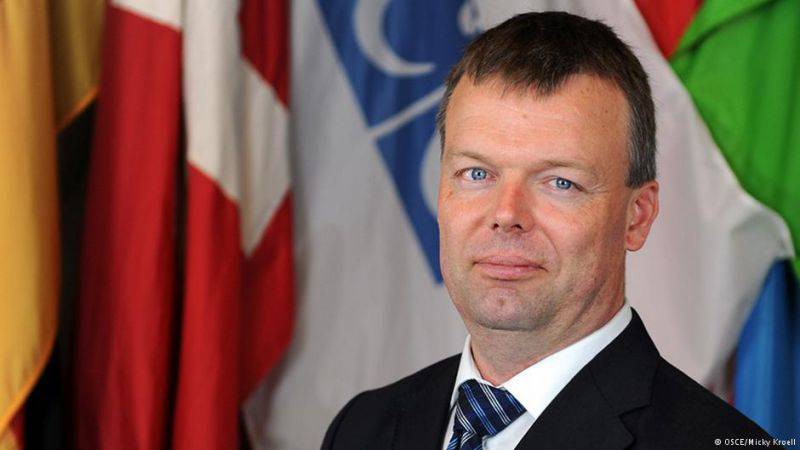 “- According to the February agreements in Minsk, the parties were to divert Grad jet systems from the demarcation line. By October, this did not happen. And now?

- In fact, the heavy weapons mentioned in the February package of agreements, two weeks after its signing, should have been withdrawn. We saw how some of the weapons were relocated to the side intended for withdrawal. A large part was collected in storage. We observed two phenomena. First, the collected weapons disappeared from the storage areas - the weapons were no longer where we registered them. Secondly, the weapon was still on the line of contact. We repeatedly observed the use of rocket launchers of the Grad type; we registered two cases. In the Staromikhailovka area, a separate Grad rocket was launched, launched from the north-west side, then a rocket was found on the west side of Donetsk, also launched from the north-west. We reported that in violation of agreements on the withdrawal of weapons, we repeatedly found camouflaged rocket launchers on the side of the Ukrainian government troops. " 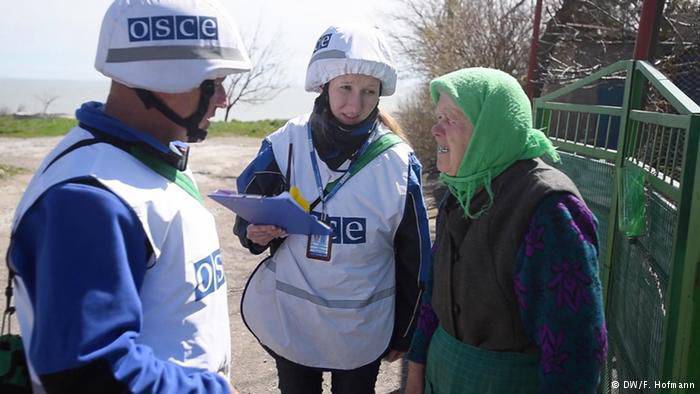 It is important to note here that from the "north-west" it is from the territories under the control of the Ukrainian troops. It is clear what they are committed for — in order to identify the firing positions of the militias in the event of “otvetka.

Nevertheless, the Ukrainian authorities continue to lie to citizens about "militant provocations", whipping up hysteria. Apparently, such a stupid way of information warfare aimed at fooling one’s own population is the only thing that the National Security and Defense Council is capable of. By the way, Turchinov today spoke on this subject personally, escorting to the water some floating latrine with a machine gun, positioned by him as the armored "Gyurza". By the way, this boat has only cuttings reserved, and even with anti-bullet armor, and the sediment of the entire 86 cm, that is, it is unsuitable for the sea, only for quiet rivers such as the Dnieper. 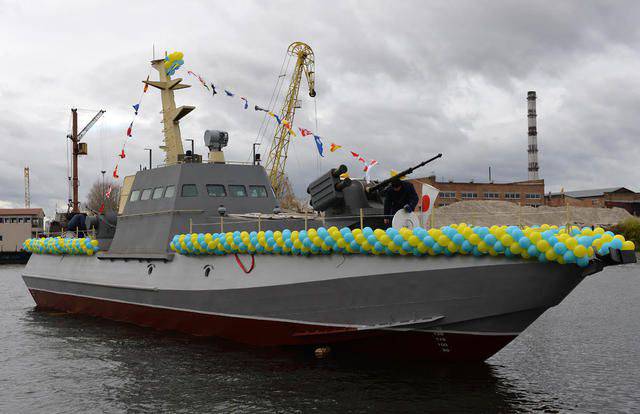 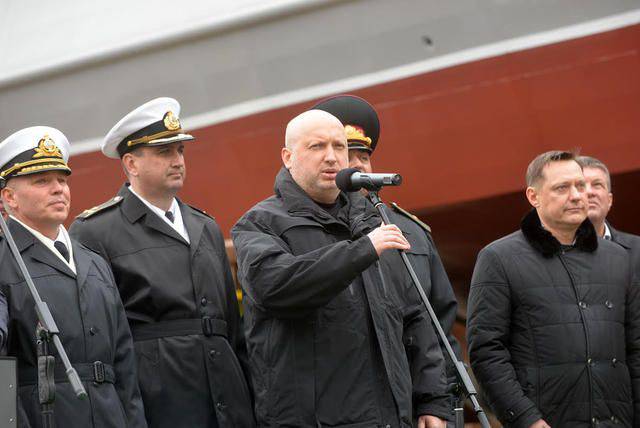 "The Russian occupying troops are doing everything to thwart the peace plan to resolve the situation in the east of our country and can resume active fighting at any time," he said, adding that this is why strengthening the military potential of our MAT "remains one of our main priorities "- the pastor spoke.

Nobody found the “Russian occupying troops”, neither European observers, nor the general staff members themselves. Only some bloggers now and then spread rumors, drawn from social networks. Even the photo is hanged, they say, here it is in his brigade, but here it is in Ukraine with a gun. But the fact that where he is "with a gun", Ukraine can be found only by their own comments, somehow it is not accepted to speak.

By the way, a little distracted about the information war. Unfortunately, even the official departments of the Square, having received, apparently, instructions from the same stupid individuals in the new Ukrainian government, began to drive so disfiguring I get on that even schoolchildren laugh. It is enough to recall at least the releases of the Main Intelligence Directorate of Ukraine, which once a month gives out a “sensation” about the massive illness of the Russian military with hepatitis. At first it concerned the Rostov region, now - Syria. Apparently, more brains are missing.

And here is another cool topic prepared by the Ministry of Image (not to pick up another word) of Ukraine. Called to reproach Russia in increasing religiosity to the detriment of education, it clearly shows all the idiocy of the Ukrainian ministry of education. After all, these lines, based on the simplest mathematics, cannot intersect! 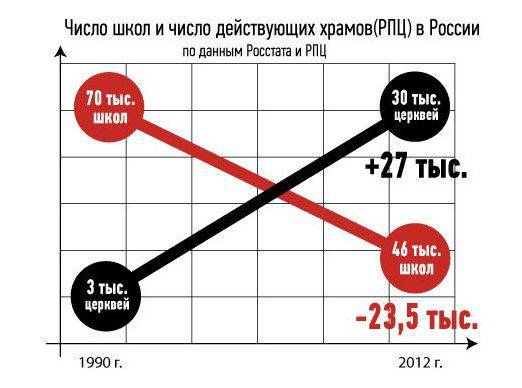 The clearest indicator of the idiocy of Ukrainian "progressors." But enough. Let's better assume how the course of the general battle will develop.

Apparently, the generals of the Ukrainian General Staff, concerned more about personal well-being than combat training of troops, concentrating strike forces on the line of demarcation, are planning a campaign for the winter period and right there is another evidence of their complete incompetence and, even more, stupidity.

There is a good rule suffered by blood and thousands of lives: if the troops are in the field, and the enemy has settled in the village, then this settlement must be taken in the shortest possible time at ANY COST. Otherwise, a fresh, warmed and entrenched enemy will easily repel, and then overthrow sluggish, frozen, not provided with any heat, food or material advances. The militiamen are at home, they are warm and fully prepared, but what is the Ukrainian military, staying in grass and forced to keep all the arriving and arriving equipment in the context of contraceptive logistics?

No, of course, at first everything will be very good: by pushing the first lines of defense by superior forces, the APU will rush into populated areas. And did anyone in ukrogenshtab think about what it will be paid for and what will happen next?

And then - the technique will rise. In an effort to gain a foothold in the occupied bridgeheads, the Ukrainian Armed Forces will begin to deliver supplies, food and fuel. These transports will be destroyed by maneuverable militia groups. As a result, every penny captured by the Armed Forces of Ukraine will be turned into an isolated frozen mug with ice, from which they will later export chilled, like broiler carcasses, corpses of Ukrainian servicemen.

How to avoid this, the Russian army has long understood. But the Ukrainian general staff doesn’t need the Russian experience, of course - why? After all, this is the experience of the aggressor, and his experience has not taught him anything for a year and a half. Therefore, the dinosaurs of the Ministry of Defense of Ukraine can only follow the principle of "pan or disappeared", and they are unlikely to become panes. 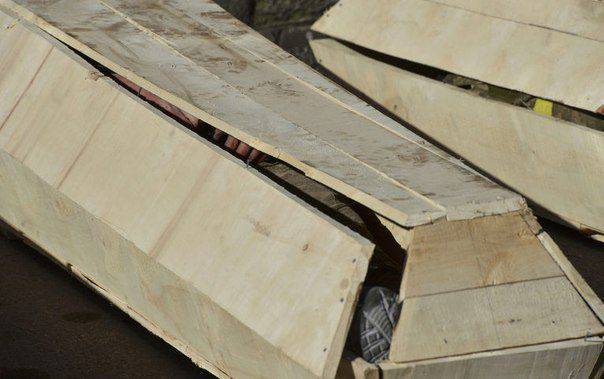 But the grave diggers of tens of thousands of soldiers - for sure.

Ctrl Enter
Noticed oshЫbku Highlight text and press. Ctrl + Enter
We are
If not for the generals ... Shameful history of the Ukrainian armyMilitary reform as an integral part of the security concept of the Russian Federation: Systematic dynamic assessment
Military Reviewin Yandex News
Military Reviewin Google News
105 comments
Information
Dear reader, to leave comments on the publication, you must sign in.