Again, the country hopes for them


The economic crisis and problems with the formation of the budget for 2016 year affected the military pensions. Earlier, in fact, a two percent indexation was postponed for a year in order to compensate for the draconian reduction factor 54 percent. In 2015, there was no promised indexation on the size of inflation, although it was produced for civilian pensions.

For some reason, no one making decisions about this or that reduction, does not think that a pension for many elderly people, especially those who have lost their health in military service, is the only source of subsistence. So, we must at least explain to veterans the causes of such metamorphoses. Alas, this, as a rule, does not occur.

Military retired people are state-minded and ready to understand the country's financial problems. But they want to know why measures to tighten the belts apply only to pensioners and do not apply to members of the more affluent segments of the population, including the oligarchy. Income tax for all, for example, as was, and remains 13 percent. 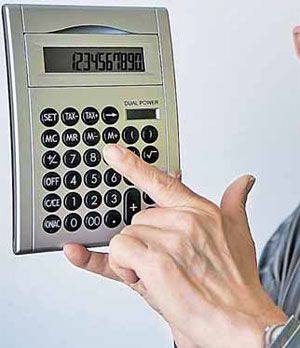 Although the Constitution of the Russian Federation explicitly states that we should not pass laws that infringe social rights and guarantees of citizens, worsening their financial situation. Nevertheless, in 2016, due to the economic crisis, the state decided to improve matters at the expense of pensioners. According to lawmakers, the rejection of indexation of pensions will be the main source of saving money in the treasury. Such conclusions follow from the budget analysis and related documents. Thus, the government submitted a bill to the State Duma, according to which, since 1 in January 2016, pensioners who have been working or engaged in other activities for more than six months in the year preceding the year of indexation will not be indexed pension and fixed payment to it. Thus, the state essentially discriminates pensioners who, by virtue of their abilities and desires, are trying to help the country with their labor. This has not yet affected the military stockpile, but by itself such an approach can hardly be called logically justified. Rather, he speaks of the absence of a unified social policy in the state, a consolidated position of the legislative and executive authorities. Moreover, it seems simply absurd, and if it should affect someone, then first of all state officials who were recently allowed five years longer to remain in public service.

In 2016, the indexation of scholarships, salaries of civil servants, judges and the money allowance (DD) of the military is not provided for. For the sake of filling the budget, pension savings have been frozen for the third time. The document proposes to extend the suspension of 24 laws until the beginning of the 2017 year. The reason for this step is again the current economic situation. Although, according to statements by presidential adviser Sergey Glazyev, huge monetary and financial reserves have been accumulated in the country, and a large part of the income from the sale of energy sources is converted into US securities annually and settled in the West.

The Ministry of Finance of Russia allegedly sorely lacks money. At the same time, the federal budget is literally choking on them: unused balances in its accounts have grown since the beginning of the year, while cutting the most necessary expenses by almost 500 billion rubles, reaching 1 trillion by October 10,6. For comparison: all budget revenues-2015 are planned at the level of 12,5 trillion rubles. And the priority, judging by the reports, is not the defense industry, not social programs, or even financial speculation in the form of public debt service, but the accumulation of money and their withdrawal from Russia - to the Reserve Fund and the National Welfare Fund, whose funds are mainly invested in US and Eurozone state securities. Thus, the main thing for our budget is financing the expenses of countries leading a new cold war with the Russian Federation, including a credit and investment blockade.

Nevertheless, military pensions are primarily the prerogative of the Ministry of Defense of the Russian Federation. How is the situation with them assessed in the department itself?

At the request of the Minister

According to a special law, a pension for persons dismissed from military service is calculated from the salary of the last full-time position, the salary by military rank on the day of dismissal and the monthly bonus for long service. The amount of the pension directly depends on the duration of the military service, the conditions of its passage and the position held at the date of dismissal. 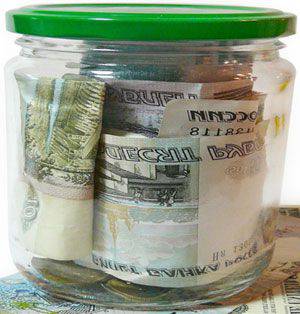 In connection with the reform of XDUMX in January 1 of the DD system of the FZ military personnel from 2012 in November 7 of the year No. 2011-FZ “On the monetary allowance of military personnel and the provision of certain payments to them”, a new DD system for military servicemen was introduced, providing for an increase in military personnel salaries account of reducing the size and number of additional payments.

Simultaneously with the implementation of this reform 309-FZ from 8 November 2011, changes were introduced that establish new rules for calculating pensions, according to which since January 1, 2012, taken into account when calculating the pension, DD is set at 54 percent.

In order to maintain the pension level from January 1, 2013 of the year provided for an annual increase of this ratio by two percent and a revision of military pensions on the first day of each subsequent year in order to bring it to 100 percent. Taking into account the inflation rate of the Federal Law on the federal budget for the next fiscal year and the planning period, this annual increase can be set at a rate exceeding two percent, which, of course, can only be welcomed. But in life everything turns out differently. Even these two percent froze for a year. And where is the guarantee that another crisis will not hit, crop failure will not happen, oil prices will not fall?

It is also necessary to say frankly that the former military could even theoretically be able to choose all 100 percent of hard earned pension only in 23 of the year. Many people just won't live to this happy day. Especially people who are 60 – 70 years old, not to mention older people. It turns out that the promised retirement interest in 100 percent is essentially an empty declaration. Why not even for the most senior category of citizens not to make an age correction that does not in any way burden the state’s pocket? By some estimates, there are only about 300 thousand of such pensioners in the country.

It is clear that the Ministry of Defense is not the Ministry of Finance, not the government and cannot independently resolve such issues. But, we give it its due, it constantly carries out work on the indexation of military pensions. Recall:


According to the military, this increase allowed an increase in 2013 in the amount of pensions to dismissed military personnel by an average of 7,5 percent, and in 2014-m - by 7 percent (2 percent higher than inflation rates established by federal budget laws for the corresponding year).

Once again, thanks to the Russian Defense Ministry for the work being done. But we know how cunning official inflation figures are, which in reality is much higher and now amounts to about 14 percent, according to independent sources.

It is also interesting that in the year 2015 there was initially no increase in DD of military personnel and pensions. In order to get the issue off the ground, it took the Minister of Defense a personal appeal to the president. Only then the issue was resolved. In particular, 20 on April 2015 was signed by the Federal Law No. 93-ФЗ “On Amendments to the Federal Law“ On the Federal Budget for 2015 Year and for the Planning Period 2016 and 2017 ”, according to which the monetary allowance taken into account when calculating pensions, from October 1, 2015 amounted to 66,78 percent, which will increase military pensions by 7,5 percent. Thus, their size will increase in monetary terms by 700 – 1200 rubles.

One thing is not clear: why should we ask about what is required by law? After all, in the 2012 year, the former military just didn’t get enough, and now, it turns out, the return of state-recognized debt must also be requested at the highest level. Why does the Minister of Defense have to remind this to our government, the country's leadership? In a legal state of choice “I want - I will give, I want - no” the official should not have. It turns out that no matter how wonderful the laws were, everything is decided by the subjective factor, the favor of high-ranking managers.

Justice is at the mercy

Now, how did military pensions change from October 1 on 2015? Their average size, as calculated by the Department of Financial Support of the Ministry of Defense of the Russian Federation, amounted to 21 290 rubles per month and exceeded the average insurance pension (12 900 rubles) 1,65 times. 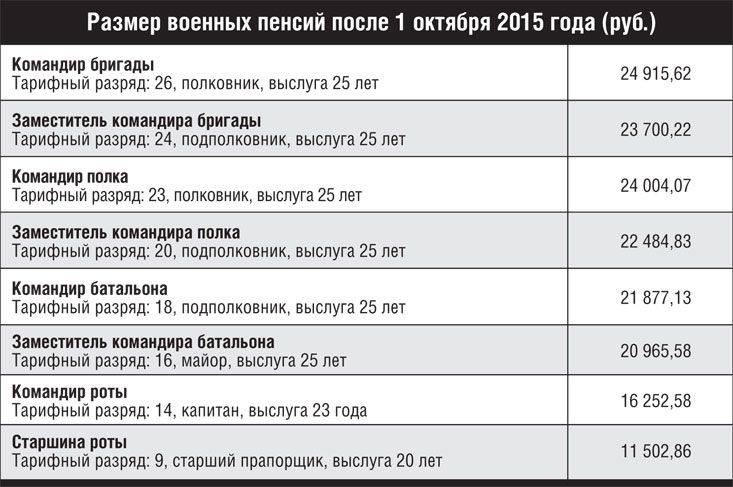 It is necessary to take into account at the same time that the retirement pension is assigned to servicemen after their dismissal after 20 years of service, and the insurance pension to men only after reaching the 60 age. It is clear that for 20 years of service, the pension is assigned to the minimum amount, and full - only for 32 years of military service.

What will be the future social policy of the state in relation to the personnel of the personnel, reserve and retired - time will tell. But in any case, it is impossible to hand it over to officials, even if they are of the highest rank. This is a question of the attitude of the state towards people in uniform, who have devoted their best years of life to its defense.

And another question of justice, which in Russia has always been considered one of the main criteria for social well-being of society and which is not yet talked about. Judge for yourself. In accordance with current Russian legislation:

for federal state civil servants, the pension is calculated taking into account all the additives, but for military pensioners it is not;
deputies of various state and municipal structures receive pensions from 75 percent or more, and military pensioners do not;
federal civil servants are entitled to a pension with 15 years of service, and military personnel with 20;
the allowance for special conditions of military service is set at 100 percent, while for special conditions of civil service - 200 percent (sub-clause 2 of clause 5 of article 50 of Law 2004 of the year No. 79-ФЗ “On Civil Service of the Russian Federation”).


Continuing to maintain this state of affairs at a minimum reduces the attractiveness of service in the Armed Forces and adversely affects the status of military personnel.