November 14 2015
4
To the 85 anniversary of the birth of Stanislav Voronin, chief designer of nuclear weapons


25 November 2015, Stanislav Nikolayevich Voronin, a major figure in the national defense industry, chief designer of nuclear warheads, could celebrate his 85 anniversary. And although 10 of August 2009 of the year he passed away, for the staff members of VNIIEF (Arzamas-16) he remains a living person, a bright, uncommon kind. 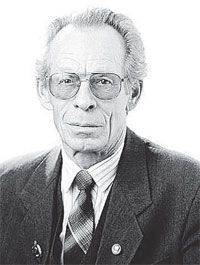 The task, in the solution of which Stanislav joined, was without exaggeration historical - A thermonuclear charge was developed for the first intercontinental ballistic missile R-7. Only after the famous Seven, capable of reaching the United States, received a nuclear warhead, the security of the USSR was fully ensured.

The role of Stanislav Nikolayevich in this work is already visible from the fact that his contribution to the nuclear equipment of the P-7 was evaluated by awarding him in the team of developers of the Lenin Prize 1960 of the year.

He developed nuclear charges, fell under radioactive emissions at field tests, actively interacted with subcontractors ... And absorbed the experience of teachers, among whom were academicians Khariton and Negin.

As a nuclear engineer, he traveled and circled the whole country - from the Far North to the southern deserts, Baikonur and Novaya Zemlya, Semipalatinsk, Kapustin Yar, the Crimean, Central Asian and many other large and small polygons, the Urals - only a part of his professional geography. Many secret bearish corners of our Motherland were familiar to him no worse than the streets of Moscow, Leningrad and Sarov. Stanislav Nikolayevich was only the head of underground nuclear tests more than twenty times.

Flight design tests of nuclear warheads (more precisely, their mockups with the replacement of fissile materials with inert ones) as part of the carriers of this weapons. It all started with the same “Seven”, when he traveled to the Korolev KB for meetings to resolve difficult issues and took part in launching missiles at Baikonur. During the flight tests of the P-7 with a prototype head unit, it was young Voronin who made an information message on the nuclear charge for the commander of the Strategic Missile Forces of the Chief Marshal of Artillery M. I. Nedelin.

Only one story from the history of the development of nuclear combat equipment for the R-7 ICBMs, according to the story of S. N. Voronin himself: “At the end of 1956, S. P. Korolev invited KB-11 representatives to discuss a very important issue. The delegation, composed of A. D. Sakharov, D. A. Fishman, S. N. Voronin, E. G. Malykhin, F. A. Sokolov, left for S. P. Korolev OKB-1. He was asked about reducing the weight of the charge and, accordingly, the warhead rocket to obtain the required range. Sakharov and Fishman explained the situation with the development of the charge. By that time, we at KB-11 had conducted three tests that did not give positive results, and the reduction in charge weight was unacceptable, since the next test was already being prepared and any alteration of the charge reduced the probability of obtaining a given power figure. After the speech of A. D. Sakharov and D. A. Fishman, S. P. Korolev invited his deputy, responsible for the general layout of the rocket, S. O. Okhapkin.

Briefly outlining the situation with the development of the charge, its testing and ensuring the range of the rocket, S. P. Korolev set a task for S. O. Okhapkin: to increase the starting weight of the P-7 rocket from 230 to 280 tons, change the documentation for its second stage during more than half a year.

This solution allowed in time for the first launch of the rocket to provide a range of more than 8000 kilometers. S. Korolev noted that this was an indication that it should be carried out, and the ways to remake the rocket were a separate issue that could be discussed tomorrow, if necessary.

At that time, the meeting was closed, but S. P. Korolev asked us to stay and tell us more about the development of the charge and the time frame for solving this problem. A. D. Sakharov answered the questions posed and said that, in his opinion, in 1957, the task would be solved. Then Sergey Pavlovich approached a huge globe with moving rulers standing in his office, clearly showed how much of the United States would be hit by a P-7 rocket with a range of 8000 kilometers when firing from Plesetsk. Then he transferred the conversation to his space programs, about the planned launches of satellites, about flying to the moon, what payloads might be, what acceleration speeds would be required when starting from the Baikonur test site. We understood the reasons for its decisiveness in terms of increasing the starting mass of the P-7 rocket, but did not ask questions. Sergei Pavlovich was important for the first step to space tasks, for him the issue of finalizing the rocket was internally resolved in advance, and we turned out to be a reliable cover to justify the excess of the launch mass of the rocket from that given in the TTZ. ”

So the intransigence of scientists from Sarov indirectly helped speed up the beginning of our space program, which opened on October 4 on October 1957, by launching the first artificial Earth satellite.

All those who knew Stanislav Nikolayevich appreciated the speed of his thoughts - in a matter of hours he could embrace what others needed days and weeks. And in 1968, the energetic 38-year-old Voronin was appointed deputy chief designer of the All-Union Research Institute of Experimental Physics (VNIIEF).

In 1991, Stanislav Nikolayevich became the third at VNIIEF (after Yu. B. Khariton and Ye. A. Negin) the chief designer of nuclear warheads, leading the development of nuclear and thermonuclear ammunition for all types of Armed Forces. In total, with his active participation and under the leadership of nuclear military equipment, 15 of the Strategic Missile Forces and Ground Forces, Air Force and Air Defense, ABM and Navy complexes were received. These complexes today form the basis of Russia's nuclear arsenal.

Stanislav Nikolayevich was a modest man. This was manifested in the fact that he - with his first-class service status - did not want to become a doctor of science "on the report." I didn’t have time to do my thesis seriously.

Nuclear weapons are a means of effectively deterring external aggression against Russia, and in this sense Voronin’s gunsmith has always worked for peace. It was a peaceful work in the highest meaning of such a thing.

And today the case that Stanislav Nikolayevich Voronin served as is still of national and state priority.