November 17 2015
5
As part of the Grasshopper (Grasshopper) program, the American company Thiokol Chemical Corporation, namely, its division of Reaction Motors, has developed several versions of personal aircraft that can be classified as jetpacks. In an effort to fulfill the order of the armed forces, a team of engineers led by Alexander Bohr and Harri Berdette Jr. developed, built and tested three devices of different configurations that had the same goals. It should be noted that none of the projects of the program "Grasshopper" has not yielded the expected results. Nevertheless, all these developments are worthy of attention, as they perfectly demonstrate the enthusiasm and resourcefulness of the inventors.


30 June 1958, Life magazine published photos of a promising personal aircraft, which at that time was developed by Tiokol. Journalists of the newspaper were invited to watch the tests of the new jetpack developed in the framework of the Grasshopper program. Ed Kurchevski was the test pilot of this device. In the future, this fact has brought some confusion. In a number of sources, another version of the Grasshopper apparatus is referred to as “Ed Kurchevsky's jet pack”. However, this man only experienced a new product, while Alexander Bor, Harry Berdett, Ray Wich and other Reaction Motors specialists were involved in its creation. 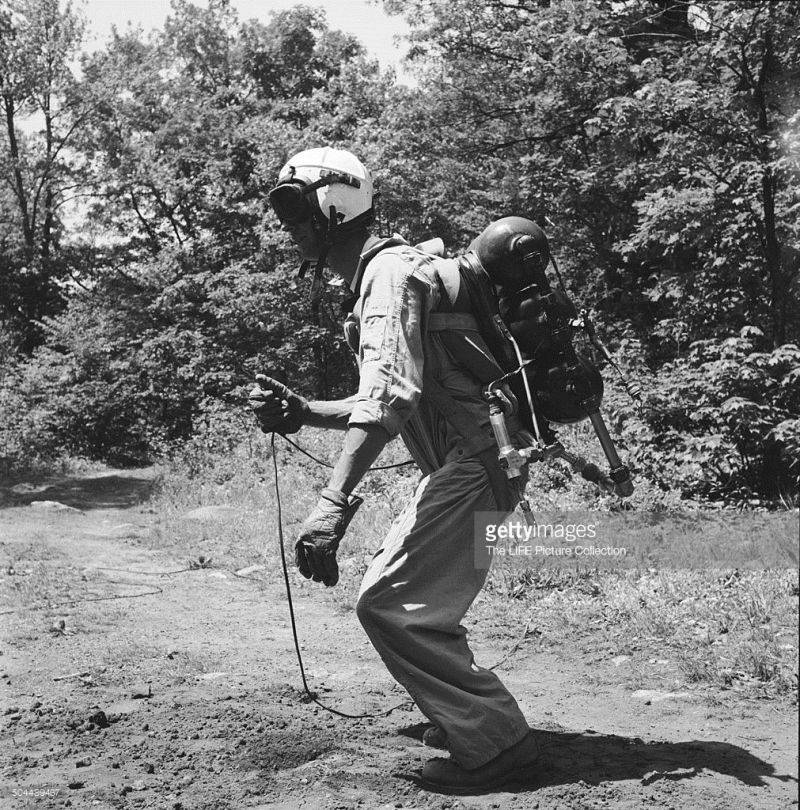 The goal of all Grasshopper projects was to create a personal aircraft for the army. This device was supposed to increase the mobility of a soldier on the battlefield, thereby increasing the combat capability of the troops. Thiokol offered three versions of such systems, differing from each other in layout, way of working and other features. "Kurchevsky's knapsack" was one of the most recent and for this reason the perfect development of the program.

As follows from the available data, the prototype of the Grasshopper system, captured by the photo journalist of Life magazine, was made in the spring of 1958, and in the beginning of summer its tests started. The device had a very simple design, because of which its manufacture, apparently, was not associated with serious difficulties.

The basic design element of the new jet pack became the supporting platform with a soft cushion and fixtures for special equipment. The pillow ensured the correct distribution of the weight of the structure and comfortable work of the pilot. In addition, it had a belt system that fixed the device on the body of the pilot. Unlike other developments of Bohr and Berdett, the “Kurchevsky knapsack” had a complete safety system with shoulder straps, chest straps and leg loops. 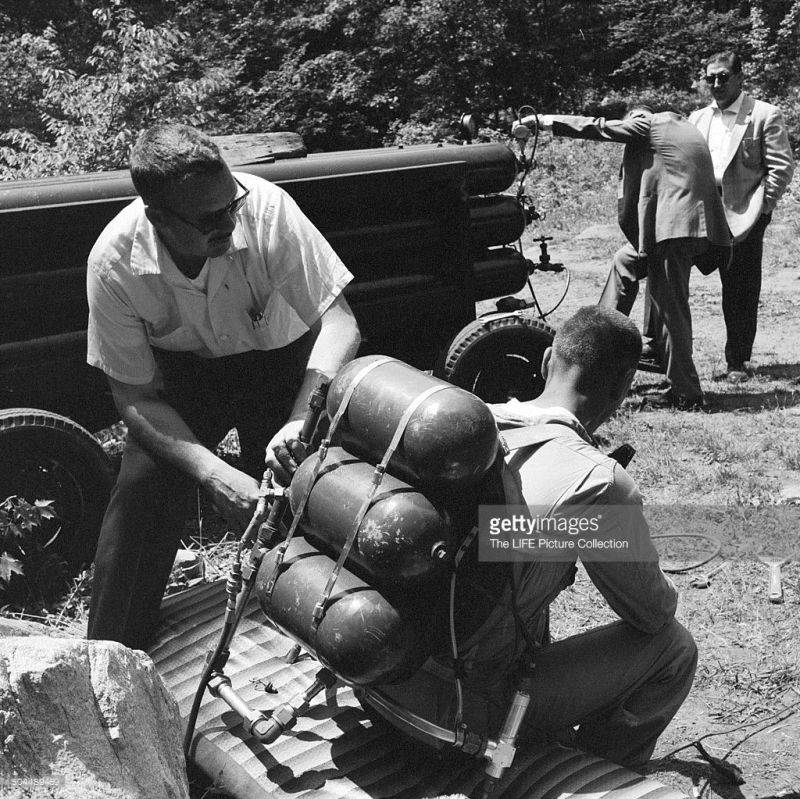 Break in the tests. Experts pumped nitrogen into the cylinders. Photo Life / 477768.livejournal.com

Behind the frame fixed three cylinders for compressed gas and a pipe system. Without making special demands on the design of the device, the authors of the project installed three cylinders horizontally and secured them in place with metal screeds. In addition, the pipes associated with the cylinders gave some rigidity to the structure.

The neck of the balloon was located on the left (relative to the pilot). A common pipeline was connected with them, the task of which was to transfer compressed gas from the cylinders to the nozzles. The middle cylinder had an additional neck, on which they provided a short tube for filling with compressed gas. Through the common pipeline, gas from the medium cylinder, when refueling, was to flow into two other tanks.

The vertical pipeline connecting the three necks, went down and, bending, joined the nozzle assembly. The latter was a pair of curved horizontal tubes. At one end they were connected to the tee and the main pipeline, at the other two were placed nozzles. For greater rigidity, these tubes were connected with a support frame using a pair of pins. The nozzles were made in the form of vertical tubular units with outlet pipes at the bottom. In addition, there were valves in the main nozzle pipes that blocked the gas outlet. When the compressed gas was supplied, the nozzles-nozzles were supposed to create jet thrust. 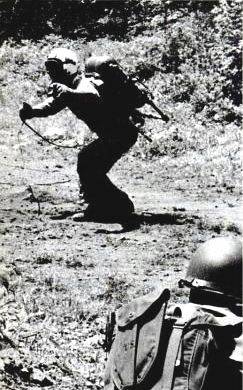 The Grasshopper has an extremely simple control system. Since its main task was to check the very possibility of take-off with the help of a “jet pack”, the control system provided only the opening and closing of valves in nozzles. Thus, the device could only take off and land or provide other simple movements. Difficult maneuvering was impossible, but this was not required.

The control panel was made in the form of a small tube with a button that fits in the hand. The console was connected to the jetpack with the help of wires (according to other data, a remote control cable). By pressing the single button, the nozzle valves opened and let in gas, which allowed the pilot to rise into the air.

The device turned out relatively compact and light. Its weight did not exceed 55 pounds (just under 25 kg), which made it easy to carry and use. Simplification of the design, such as the use of screeds for fasteners of cylinders, has saved weight and thereby to a certain extent, improve performance.

The aircraft, which was tested in the summer of 1958, was supposed to use compressed nitrogen. This gas under pressure was pumped into three cylinders and had to provide acceptable traction. Opening and closing the nozzle valves, the pilot could regulate the thrust and make long jumps or small flights.

During the tests, Ed Kurchevski used relatively simple protective gear. For flying, he wore a helmet and goggles, overalls, gloves and high work boots. No other protection was required. If the Grasshopper had reached mass production and supply to the army, the soldiers-pilots could only manage with regular uniforms, without needing special means of protection or other equipment.

The trials started at the beginning of the summer of 1958. To carry them out, the authors of the project had to fill gas cylinders several times a day and check the operation of all systems. The test pilot E. Kurchevsky, in turn, mastered the control of the apparatus and learned to use it in different modes. By the middle of June of the same year, the specialists of the Reaction Motors company proceeded to tests in open areas. 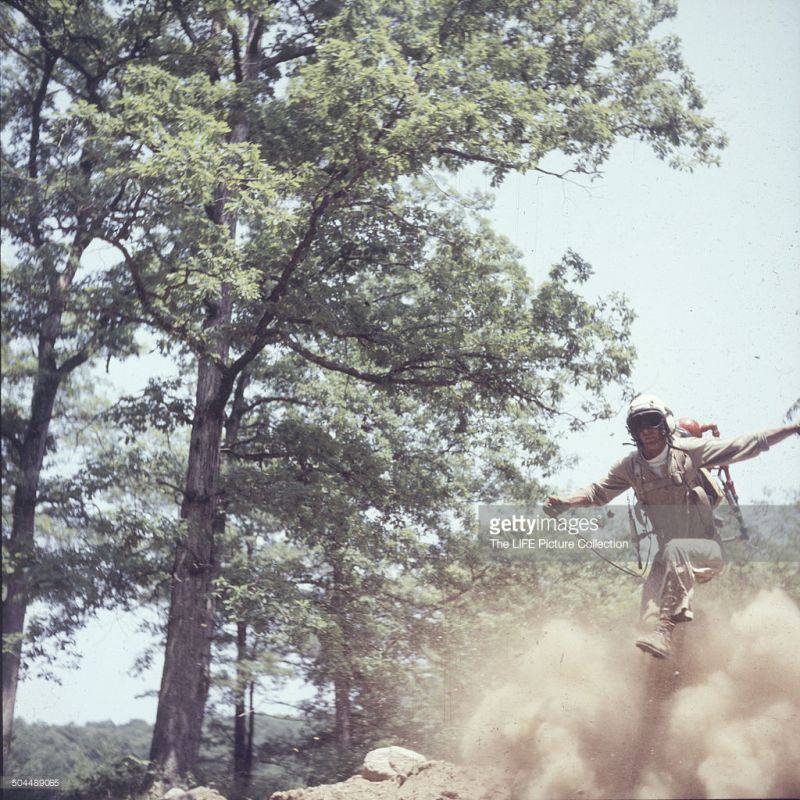 In similar field trials, E. Kurchevski tested the Grasshopper in different areas and on different terrains. Short-term low-altitude flights, high-speed jogs using jet thrust, long jumps, etc. were carried out. Due to the correct operation of the valve control button, the pilot could regulate the engine thrust and the time of its continuous operation. During the tests, it was possible to climb to a height of about 4 feet (1,2 m) for a few seconds, jump over fairly wide obstacles and perform other “exercises”. The maximum width of the crossed water barrier reached 8 meters.

Despite all the successes, the tests of the Kurchevsky Jet Pack were accompanied by some setbacks. In addition, they allowed to identify fundamentally inherent flaws. So, the magazine Life told that using the device could lead to injuries. During the demonstration tests, which were attended by journalists, E. Kurchevski, jumped over the creek, but unsuccessfully landed on the opposite bank and received several bruises. Other ways to use the knapsack could also lead to the receipt of certain injuries.

The proposed personal aircraft had another drawback. Three cylinders did not differ in large capacity, because of which the supply of compressed gas left much to be desired. Full consumption of the existing "fuel" provided only a small approach in a matter of seconds. The tester encountered the same problems when trying to jump a wide obstacle or run at high speed. 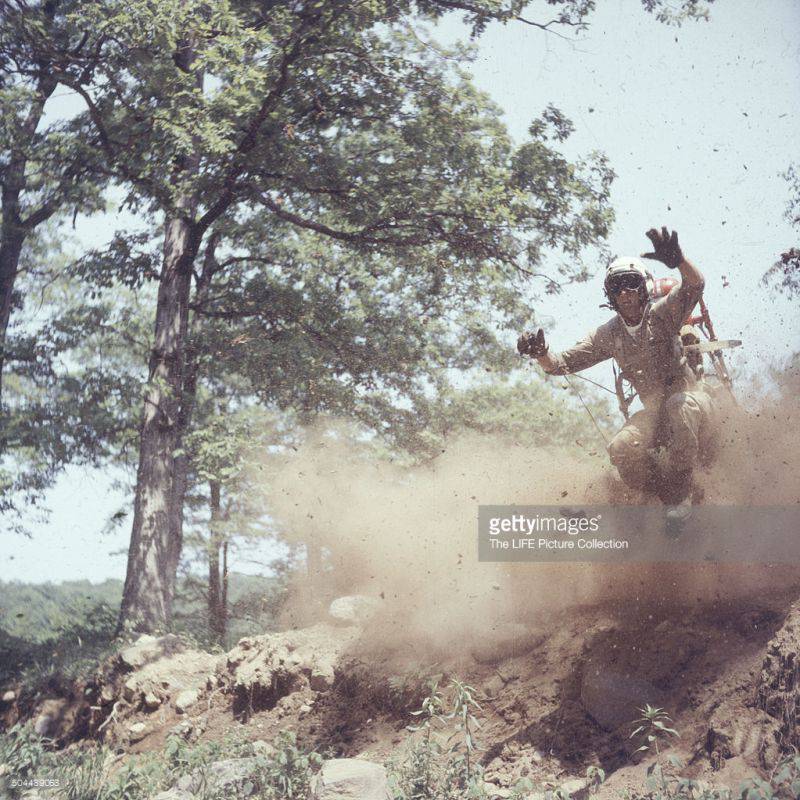 Projects jetpacks company Thiokol Chemical Corporation / Reaction Motors attracted the attention of journalists from various publications. During 1958, several articles appeared on the Grasshopper program and the three aircraft created within its framework. About the promising developments of the team of A. Bohr and H. Berdett wrote the publication Life, Popular Science, etc. A note about the project appeared even in the sports magazine Sports Illustrated. However, over time, the excitement slept. Specialists from Tiokol talked about the great prospects for their own developments, but for several months they were not able to confirm their words with deeds.

Already at the end of 1958 of the year (according to other data, in 1959), military specialists familiarized themselves with the results of the Grasshopper program. Three projects from Reaction Motors looked promising, but a detailed review made the military close the project. The reason for this was the low characteristics of all three developed systems, as well as the impossibility of raising them to an acceptable level without drastic processing of projects. 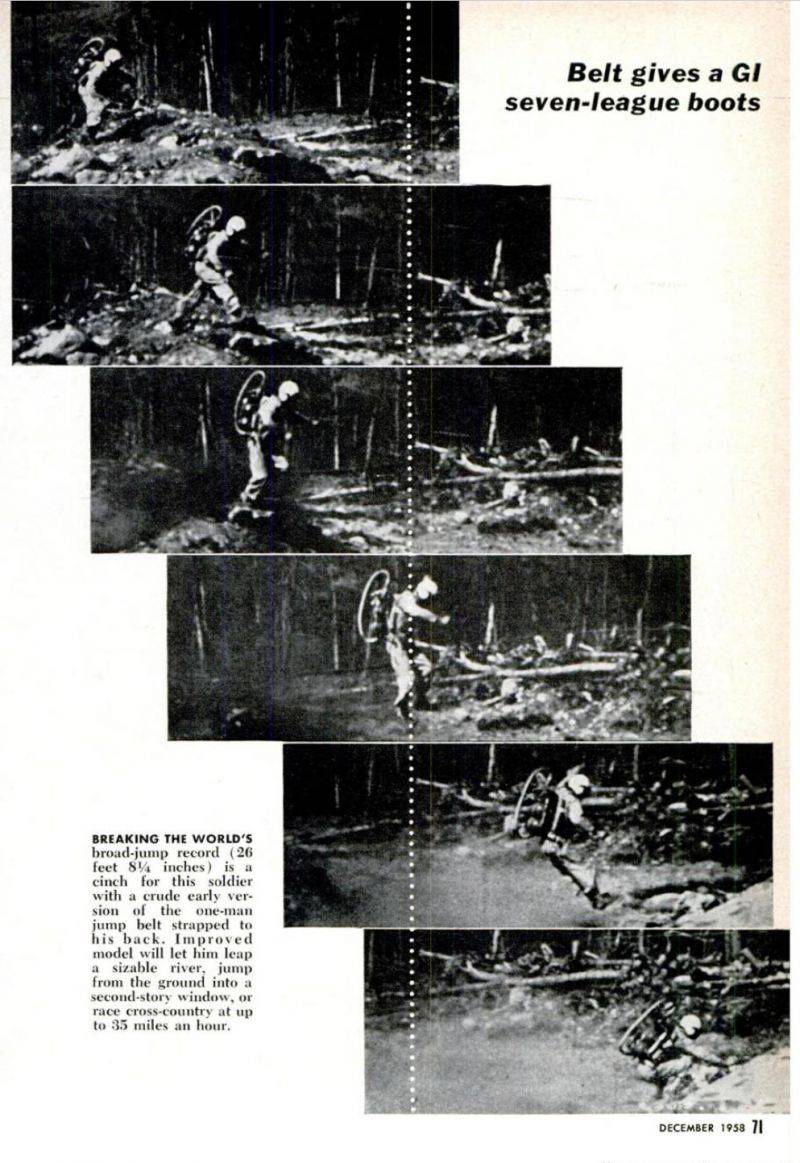 The checks of the three vehicles, including the Ed Kurchevski Jet Pack, clearly demonstrated the uselessness of using compressed gas. This "fuel" gave insufficient traction and was spent too quickly. At one gas station, in the best case, the pilot could only make a few long jumps or climb one obstacle no more than a couple of meters high. In addition, a satchel with similar characteristics weighed several tens of kilograms. As a result, such a device did not improve the mobility of a soldier on the battlefield, and even noticeably spoiled it. Naturally, the army could not order such equipment.

In a matter of months, a team of engineers led by Alexander Bohr and Harri Berdett Jr. created three versions of promising personal aircraft that could go into series and enter into service with the American army. However, none of these developments could not interest the customer. Experts suggested using compressed nitrogen as an energy source, which, as it turned out during the tests, did not provide the required characteristics. As a result, all the aircraft of the Grasshopper project could not arrange the military.

Having failed with three projects and having been refused by the military, Thiokol / Reaction Motors ceased all work on jetpacks or other personal aircraft, and the development of this direction continued without it. All manufactured samples went to the warehouse as unnecessary. The fate of these unique products is unknown.