November 12 2015
29
Working in hot spots, the fighters of internal troops and other power structures are faced with a number of threats. They regularly run the risk of being ambushed or blown up by an improvised explosive device on the route. To counter such threats, units of the Ministry of Internal Affairs require appropriate equipment. Previously, for the protection of personnel used trucks equipped with improvised booking and known under the general title "Pokemon". Over time, they were replaced by armored cars built by industry based on production vehicles using factory-made armored modules. One of the latest models of such technology is a protected car "Federal-42590".


Armored car "Federal-42590" is another representative of the same-name family of vehicles built on the basis of trucks brand "Ural". As before, the project involves equipping the base chassis with a number of new units, including protective equipment and a special armored van module for transporting personnel or cargo. For several years, the equipment of the “Federal” family has undergone a number of major changes aimed at improving the protection performance and improving ergonomics. As a result, different machines of the family have some differences in terms of used units, layout, etc. 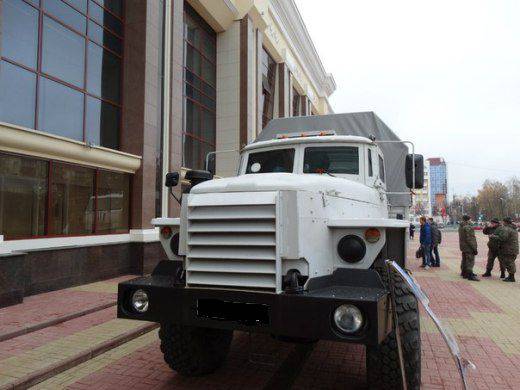 Like other cars of the family, the Federal-42590 was developed by the Institute of Special Equipment (Moscow) and is being built on the basis of the Ural truck. This time Ural-55571 chassis was taken as the basis. This all-wheel drive triaxial chassis has a lifting capacity of 12-14 t, which is enough to install all the necessary equipment and maintain the required mobility characteristics. According to the developer, the curb weight of the armored car reaches 16 T. The maximum payload weight is 5,3 T. Thus, the chassis characteristics are used with maximum efficiency.

During the conversion into an armored car, the base chassis receives a set of booking elements. Reinforced shutters are installed in front of the grille, the side and top of the engine is covered with armor plates. Similarly, cockpit protection is performed. All elements of the cabin, including doors and roof, are equipped with armor. Cabin glazing is made of bulletproof glass. There are several loopholes for shooting from personal weapons. In the roof of the cabin provides hatch. The level of protection is determined by the customer. It is possible to protect the driver according to 6 / 6A class of standard GOST R 50963-96. 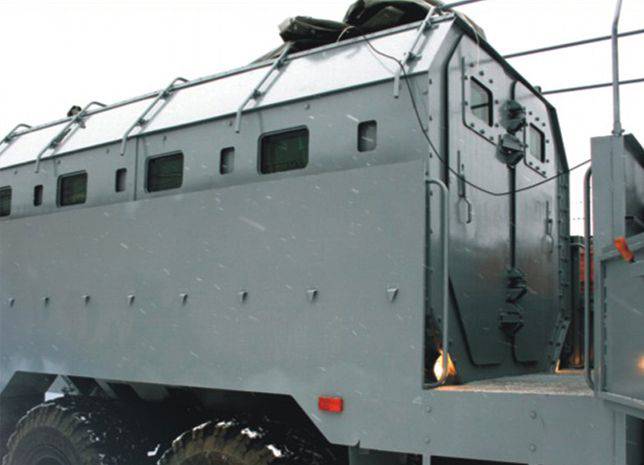 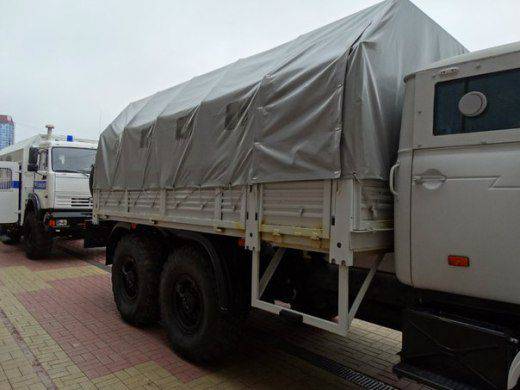 The front deck and side door are covered with an awning. Photo Vestnik-rm.ru

In place of the cargo area of ​​the base vehicle, a special armored module is mounted with places for transporting personnel or cargo. It is noteworthy that such equipment armored car may have a different architecture. Known machines, armored module which is combined with the "classic" side body. In the promotional materials of the manufacturer there are images of cars equipped with additional armor in the form of relatively high sides.

The armored module of the landing of all the armored vehicles of the “Federal” family is a van-KUNG made of armored steel. The sides are provided with several windows and an embrasure with flaps. This equipment allows fighters to fire from personal weapons. The armor module is equipped with several doors, the number of which depends on the modification. So, in all variants one or two stern doors are provided. It is also possible to install doors in the front sheet. The layout of the door affects some features of embarkation and disembarkation. 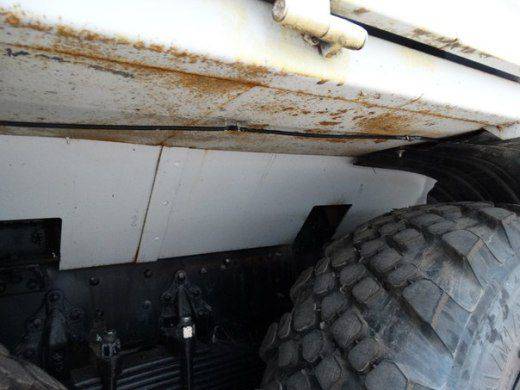 Guards, providing additional protection units of the chassis and the bottom of the armored module. Photo Vestnik-rm.ru

The design of the armored module uses sheets that provide protection for 6 / 6А class. In addition, in the case of the machine “Federal-42590”, personnel protection was declared against the detonation of an explosive device weighing up to 10 kg (according to other data, up to 6 kg). To do this, use some of the design features, as well as special chairs for the landing. To increase the survivability of the vehicle and reduce the risks for the crew / assault force, fuel tanks of the original design are used to prevent the fuel from splashing during detonation, thereby reducing the likelihood of a fire.

Armored cars of the “Federal” family have a different design of the armored module and its internal equipment. In this case, projects use some common solutions. For example, the length of the armor module is noticeably less than the length of the body of the base machine. Because of this, it is mounted in the center of the body or shifted back, which is why a small platform is left in front of the module or behind it. Armored "Federal-42591", in particular, has two platforms, in front of and behind the module, as well as two sets of doors of the module itself. All these features to some extent facilitate the landing and disembarkation. 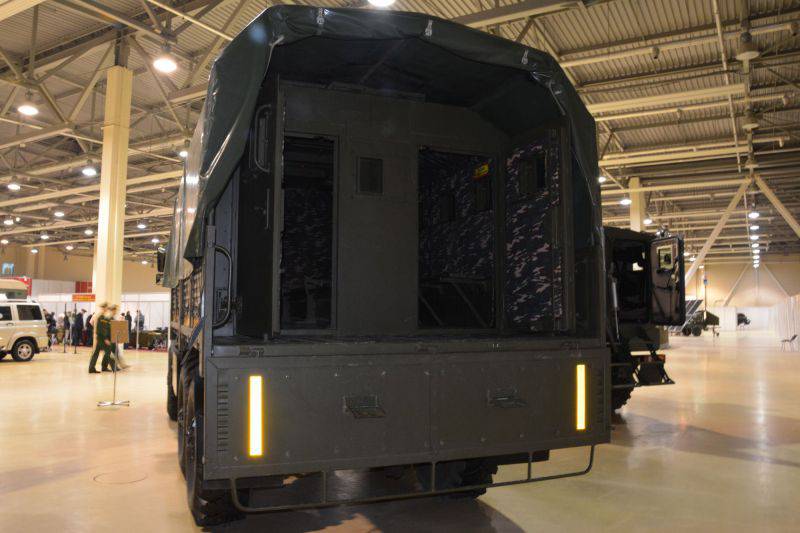 The back of the armored vehicle "Federal-42591". One can see the body area and benches for the landing. Photo author

This layout of the Federal-42591 allows the assault force to leave the vehicle through the front or rear doors. In this case, the soldiers, landing in front, dismount through a small opening with a door in the side of the body. Coming through the rear doors, the fighters must descend through the bodywork. For the convenience of fighters provide small steps.

Armored car "Federal-42590" has a slightly different layout. In his case, the armored module of increased length is installed with a shift back, and its stern part does not protrude beyond the body. This arrangement still allows you to land through the front doors and the opening in the board. Two doors are kept in the hull's stern sheet, and disembarkation is carried out with the help of a small step at their openings and a descending ladder. At the request of the customer, the armored module can receive only one door. In this case, the device for the transport of the spare wheel is mounted on the remaining part of the stern sheet. 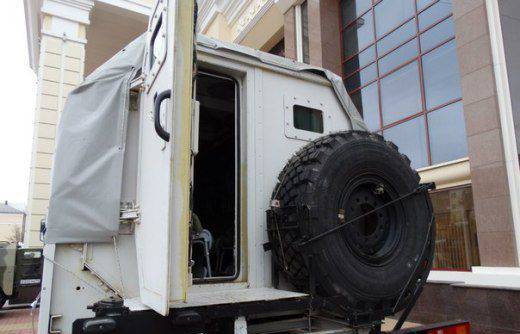 The early modifications of the Feds had fairly simple landing sites, made in the form of ordinary benches. Due to the use of three shops (two at the sides and one in the center), it was possible to place up to 16 people in the module. Modern machine "Federal-42590", taking into account the new threats, is equipped with special "anti-mine" seats, absorbing part of the energy of the explosion. This feature significantly reduces the risks for the landing, although it affects the capacity of the armor module. With such seats, an armored car can carry no more than 10-12 fighters with weapons.

The front side of the body, which houses the armor module, is equipped with an arc for installing an awning. Armored vehicles with a rear platform have a second arc behind the module. If necessary, the armored module can be closed with an awning that provides masking. An armored car with an awning looks almost the same as a conventional truck on a similar chassis and can be confused with it when viewed from a long distance. 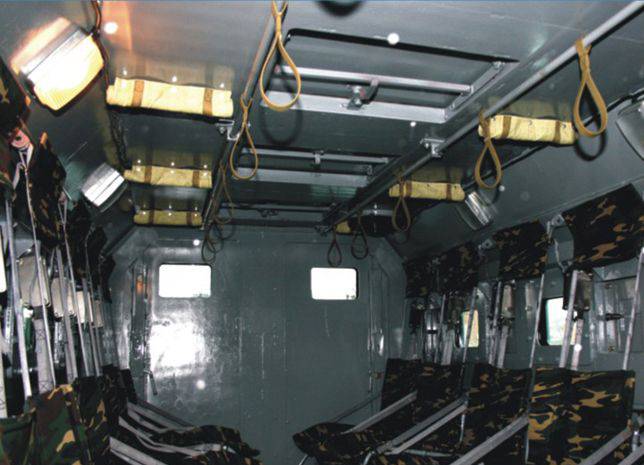 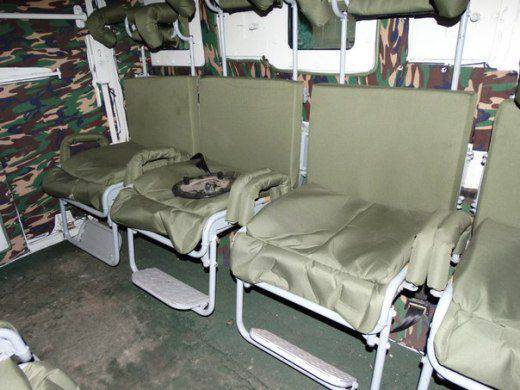 Different options for equipping the armored module. Photo Insst.ru (above) and Vestnik-rm.ru (below)

Armored cars of the “Federal” family, including the “Federal-42590” model, have been massively produced over the past years on the order of the Ministry of the Interior. Such equipment is transferred to the formations of internal troops, riot police units and other structures of the Ministry of Internal Affairs, which need protected equipment for the transport of personnel and cargo.

Having replaced the improvised “Pokémon”, which was a response to new threats, armored vehicles of the “Federal” family are actively used by various structures of the Ministry of the Interior and successfully solve assigned tasks, protecting people from mines and ambushes. Using the experience of operating old cars of the family, the authors of the projects create new equipment with enhanced characteristics, which comes into service. Thanks to this, the risks for the security forces fighters are reduced, and they can safely get to the place where the task is to be performed.