Yarosh said the resignation of the leader Pravosekov

November 11 2015
85
On the page of a man named Dmitry Yarosh on Facebook there was information that he decided to resign himself as the leader of the Right Sector. Recall that the "Right Sector" is still considered a political party in Ukraine, in Russia this organization is prohibited by a court decision.
On his "resignation" Yarosh reports as follows:

Brothers!
On November 8, a conference of the leadership of the Right Sector was held in Kiev. The goal declared by the organizers - part of "PS" - was to develop materials for the preparation of the All-Ukrainian Congress "NVR PS", to become a unifying factor for Ukrainian patriots, to prepare a revolutionary concept of counteraction against external and internal enemies. But the initiators and some participants in the meeting assumed illegitimate functions: determining the strategic direction of the PS development and electing another “wire” (headquarters), where I was assigned the position of “conductor” (leader).

All the time of the PS existence, I conducted an asset and fighters of combat units and subunits in the national government direction. Preservation of statehood, the beginning of qualitative, revolutionary changes in it for the good of the nation are those tasks that I set primarily for myself, and secondly - for the leadership of the Armed Forces, the AOA and the whole organization. For me, as for many of you, the creation of UDSD (“Ukrainian independent conciliar state”) and the struggle for it are not empty words, but the meaning of life.

Creating a volunteer corps, many of us for the first time in my life took weaponbut thanks to ideology, sacrifice and faith in Ukraine, we have become a model of military spirit and fraternity. We believed in ourselves, and the Ukrainians believed in us: the help of volunteers and the support of society allowed us to grow and fight.

In most regions of Ukraine, people see the last hope for justice in the PS cells. People turn to us when they have nowhere to turn to.

Having been injured and demanding a long time for treatment, I entrusted some directions of movement control to my closest associates who had and have my own view on the development of the nationalist movement. My own position is far from coinciding with the aspirations of the part of the “wire” (headquarters).

As a “conductor”, I am personally responsible for everything that happens in an organization, and I am not going to shift it to others. That is why I can not be a "wedding general" in the "Right Sector".

Therefore, I have to refuse to offer to head the headquarters proposed by the conference and resign myself as the leader of NVR PS, remaining a nationalist, a statesman and a revolutionary.

Thanks to the brothers in the joint struggle, I wish you all the wisdom and strength in the future ways of obtaining the Ukrainian Independent Congregational State! 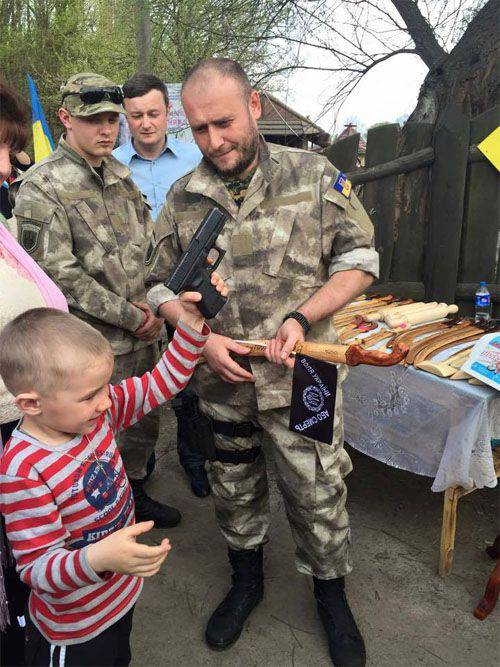 In Ukraine, among political scientists, many believe that Yarosh is in fact not going to resign from the office of the leader of pravosek, but simply, as they say, plays to the public, wanting to receive statements that he is irreplaceable for PS. There are those who believe that Yarosh leaves the post of PS leader in time, as Ukraine can start cleaning in the ranks of those on whom Poroshenko relied on 2014 in February.

Ctrl Enter
Noticed oshЫbku Highlight text and press. Ctrl + Enter
We are
Yarosh announced the creation of a new "association" and confirmed his resignation from the post of ringleader of the law-enforcement agencies
Military Reviewin Yandex News
Military Reviewin Google News
85 comments
Information
Dear reader, to leave comments on the publication, you must to register.