Roman Efremenko: "I can say with absolute certainty who shot us on the Maidan"

November 12 2015
18
A veteran of the Sevastopol "Berkut" tells "Journalist Truth" about the present day special forces of the Ministry of Internal Affairs of Russia. 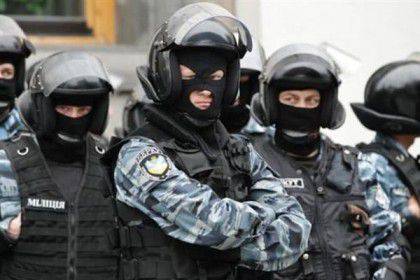 Russian President Vladimir Putin congratulated the officers of the internal affairs bodies on their professional holiday and noted that it is necessary to improve methods of training and raising the qualifications of personnel, the Kremlin’s press service reports.

“You stand on guard of law and order, protect peaceful life and peace of people, fight against crime, corruption, terrorism. In order to effectively solve these tasks, the employees of the internal affairs bodies must have impeccable professional and personal qualities, deep knowledge and excellent training that meets the most stringent criteria and requirements, ”the press service of the word from the president’s congratulatory telegram cites.

He also noted that it is necessary to actively develop and put into practice modern technologies, to improve the methods of training and raising the level of staff skills.

About how the fate of the special unit "Berkut", which entered the staff of the Ministry of Internal Affairs of Russia after the Maidan and the "Crimean Spring", we talk with veteran of the special unit "Berkut", chairman of the Sevastopol branch of the all-Russian public organization of invalids of the war in Afghanistan and the war invalids military incident Roman Efremenko ... 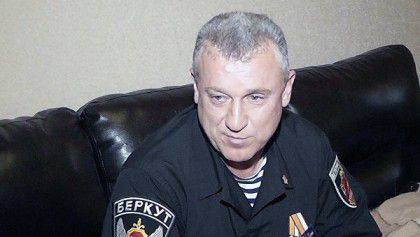 - Roman Yurevich! What does today's holiday mean to you, and how do you prefer to call it in your circle: the day of the police, the police or the president ... "professional holiday of law enforcement officers"?

- Probably, in the old manner - the day of the police. It was both in Ukraine and now, when we became part of the Russian Federation. Militia Day was and will remain.

Right now I am in Moscow as a representative of the Sevastopol branch of the All-Russian public organization of war invalids in Afghanistan — this honor has been given. Unfortunately, I am away from home, from friends. But received greetings from the guys on the phone. Although we usually gather in our wide circle ...

- Of course. I am now in the center of rehabilitation therapy named after Mikhail Alexandrovich Likhodey (a veteran of the Afghan war, a lieutenant colonel, an invalid of the 1 group, whose grave at the Kotlyakovsky cemetery 10 in November 1996, an explosion occurred - Ed.). There are also enough Afghan guys who served in the internal affairs bodies. Today we received certificates of completion, congratulated each other. Someone even received awards in connection with the 70 anniversary of the Victory in the Great Patriotic War and for the delivery of humanitarian aid to the Donetsk and Lugansk regions (regional organizations collected and delivered more than 120 tons).

“The editors of Journalistic Truth also congratulate you. And first of all, of course, health! You and your loved ones. This is important for people who have been and continue to be in the ranks despite everything ...

- Thank! Thank you very much!

- Roman Yuryevich, tell me how you feel about the fact that the police were renamed the police?

- I think the name does not matter. How it is called: “militia”, “police”, “internal affairs bodies” - it does not matter. Essence does not change. It all depends on the people who work there. The main thing is that they perform their tasks with honor. What they were taught and called for.

- What memories do you have about the day of the police?

- You know, this is how it happened ... I am at the center of rehabilitation therapy named after Mikhail Alexandrovich Likhodey. For us, November 10 is a double tragic anniversary.

10 November 1994 of the year Likhodey was blown up in the entrance of the house, and then 10 on November 10, 1996 was an explosion at the Kotlyakovsky cemetery, where 14 Afghan people died and came to honor the memory of our comrade. More than 50 man was injured. It so happened that these dates coincided.

Today there were great events: laying flowers, an evening of remembrance and, of course, a meeting with fighting friends - those people who participated in the Crimean events.

We both were "Berkut" and remained. Nowhere not to get away from this. I am very proud that I had to serve in this unit. Moreover, I stood at the origins of the Sevastopol "Berkut", which was formed 2 September 1993 year. A lot of memories, both positive and simply memorable ...

- What is the Sevastopol Berkut today?

- Today's "Golden Eagle" is a division of the internal affairs of the Russian Federation. This is a special police unit. It left to pass their further service, those who served in Ukraine and who February 23 2014, took an important decision for themselves. They proved their loyalty to the citizens of Sevastopol and Crimea.

Berkut is the only unit that from the very first day after returning to the 22 base in February, they decided to close the inhabitants of Crimea. And it managed to do.

- Tell me, how quickly in those days you decided to be with Russia and nothing else?

“It began sometime around December 2013 after the events on Maidan. We then saw and felt in our own skin what a “brown plague” is, what a radical-minded youth is. People elementary powdered brains.

The guys from the Sevastopol "Berkut" were on the Maidan. Thank God, we did without the “200th”, but 8 people were injured. And the Ukrainian "Golden Eagle", unfortunately, lost several people. Including Simferopol "Berkut". They had one "two hundredth" and a lot of wounded.

When confronted with this plague there was no other way out. Moreover, the Crimea is a specific territory. We needed to make a decision as soon as possible. And now our units returned to the Crimea and Sevastopol 22 February, and in the night from 26-th to 27-we already went to the Crimea. This decision was taken by itself.

- Do you maintain contact with the “Berkuts”, who chose to stay in Ukraine and why did they make such a decision?

- I will tell you this: there was not a single person from the Crimea. Of those who preferred to remain with this provisional government or impostors (I don’t know what else to call them), who seized power by force — there were no such people in our units.

There were divisions of "Berkut" from the Western Ukraine. They returned to their units. On the central TV channels showed how they were put on their knees. It was in Lviv. I will tell you that there is an example from whom to take. This is the commander of the Lviv "Berkut". In order not to transfer the base of the "Berkut" to the radicals, he blew it up. There were dead - two fighters. Therefore, not everyone knelt down and not everyone “wiped off”.

A lot of fighters from different divisions: from Zaporizhia, from Nikolaev, Kherson, came to us. From Lugansk, from Donetsk there were a lot of guys. They threw their special forces in the Crimea. We defended the Crimea shoulder to shoulder.

To say that someone ran there - I would not. Kharkov "Berkut" in general - 35 people went into the woods to partisan. Although they were offered a lot of things.

You know, the “Golden Eagle” is a kind of fraternity, among which there are also “spotted berets” - a completely separate topic. We have not seen traitors in our ranks ...

- Kiev is trying to talk history with shooting on the Maidan. Your version, who shot?

- I can say with full responsibility that the "Berkut" did not make shots to kill. The reason is simple - it was not weapons. All special forces were intended to disperse riots. There were pump-action shotguns for firing rubber charges, batons, helmets, shields, tear gas, light-noise grenades - everything.

Believe me, if the special unit "Berkut" were armed with firearms, nothing would have happened on the Maidan.

18-th number rang out the first shots. I assure you, the “golden eagle” did not take any part in this. Moreover, the units of the SBU, which were put forward for sniper hunting, they also did not open fire.

Who was there, I can voice ... There were snipers who came from Georgia and the Baltic states.

- Let's take a closer look at this, as well as the “Crimean Spring”, the situation in the Donbas and many other things, we'll talk in the second part of the interview, but for now let's get back to the main topic. If we compare the special unit "Berkut" before the annexation of the Crimea and after, when it began to live, work is easier and why?

- (laughs) I will tell you this: there was no easy life then or now. But in terms of equipment, weapons, special equipment - no comparison with life in Ukraine.

To date, the guys got everything they need in order not to be distracted by some other, say, moments. All conditions have been created in order to apply all of their skills and abilities in their daily work.

Equipped in full. Slowly fits new weapons, the guys learn to handle it. To date, technology received a sufficient amount. Therefore, there is no comparison with Ukraine in terms of security.

Today, the "Golden Eagle" performs the same functions as before: preventing unrest, fighting crime, capturing leaders, and so on. Normal daily work.

- Tell me, did the reduction of the staff of the Ministry of Internal Affairs affect you and what do you think about this?

- Not. "Golden Eagle" is not affected. On the contrary, our state has become more. I do not have the right to voice specific figures, but take my word for it. Not only that the states of the "Berkut" increase, we still have units of SOBR.

- Well, how do Sevastopol crooks feel today under the Russian "Berkut"?

- They always felt uncomfortable. I found this time, starting with the 90's. There was an unspoken rule among organized crime - they called us “red hats”. And so there was the so-called "skhodnyak", where they decided to bypass the tenth expensive "red hats". Do not enter into any scrape with them. The rogues felt it in their own skin ...

Believe me, our unit is seriously engaged in physical and combat training, so it can give such a rebuff that little will not seem to anyone. Any criminal.

- But after all, in such a serious work, there will surely be a place for curiosities ...

- If only offhand ... Once we were preparing to seize people who sell weapons. An operation has been developed. One of our employees was sitting in the trunk of a Zhiguli. When the bandits arrived at the so-called "arrow", at the last moment they decided to replay the area of ​​this "arrow."

People who participated in this operation, jumped on cars. And about the employee who was in this trunk, forgot ...

Already the operation was over, the criminals were tied up, and then they only remembered that “Vasily” was left in the trunk. It took at least three hours. He did not hear the signals “to stand for all”, “facing the ground”, and the like, so he lay quietly in the trunk.

The guys decided to check how he feels in this closed space. And what do you think? Vasily jumped out and made a line from the machine. His legs were so numb that he fell out of this trunk as if he were about to go. (laugh)

- Great! And finally, perhaps ... What would you like to wish your colleagues on this holiday?

- I would wish all employees of the internal affairs bodies and the special unit “Berkut” health, well-being, happiness, and, of course, a peaceful sky over my head ...

Ctrl Enter
Noticed oshЫbku Highlight text and press. Ctrl + Enter
We are
Commentary on A. Petrov's interview “Fire and Tactics in the Russian Army: Another Look”Interview of V. Putin to Channel One and the Associated Press Agency
Military Reviewin Yandex News
Military Reviewin Google News
18 comments
Information
Dear reader, to leave comments on the publication, you must to register.