November 13 2015
90
The publication in the VO of the article by A. Volodin and the controversy that followed it on the pages of the site once again show that the citizens of Russia are fed up with myths, both “right” and “left”, that история Fatherland is very important for them, as well as those sources on which the historian can rely, studying it. And it turned out that just my graduate student S. Timoshina was working on the topic of informing Soviet citizens about life abroad and, while working on her dissertation, I looked through almost all of our regional and national newspapers from 1921 to 1953 a year. Well, and I read them with her, naturally, and I did. And we decided to introduce VO readers with the results of the just completed study. At the same time, we did not give page-by-page links to articles in newspapers, since this takes a lot of space. But I will emphasize once again, the links are almost for every word, number and fact. After all, this material is, in fact, a “piece of dissertation”. And this is what the analysis of newspaper materials undertaken by the authors showed: instead of one information flow hitting one target, there were three of them, and they diverged in different directions and contradicted each other! The consequences of such an information policy turned out to be sad and make us think about a lot. 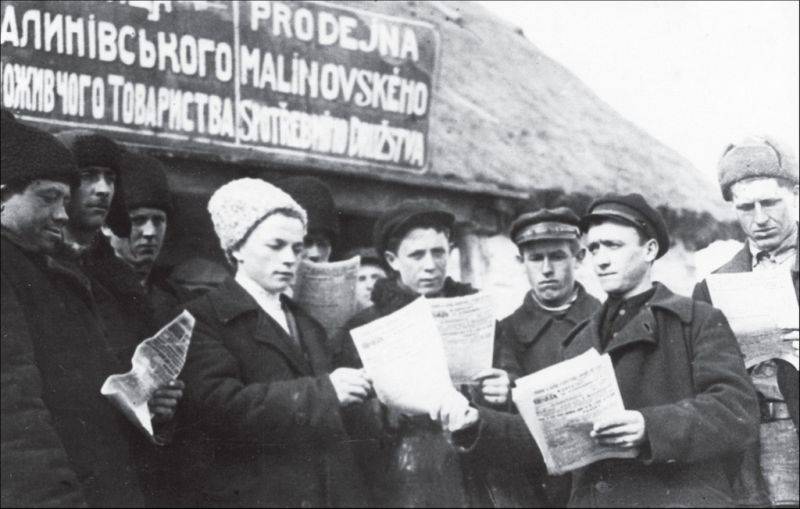 "Road number XXUMX:" You are my dear, world revolution! "

To begin with, the 1921-1927 period could well be called the time of maximum democratization and freedom of speech of the Soviet press. So, in the central press and in regional editions detailed news were published about the famine in the Volga region. It was reported which states and public organizations of foreign states help the starving. That in the Samara region all gophers are eaten and people eat up cats and dogs, and hungry children abandoned by their parents wander the streets in search of a piece of bread, workers live in appalling conditions, and “employees of universities and scientific institutions - professors, teachers and technical employees stand on their wages at the very last place. " It was reported about the frequent manifestations of "labor desertion" for which, for example, in Penza was punished by imprisonment in a concentration camp (!) For a period of one to four months.

However, with regard to informing Soviet citizens about life abroad, an example of the leadership of the Soviet press of those years can serve as a secret circular signed by Secretary of the Central Committee of the RCP (b) V. Molotov from October 9 1923, where an assessment was made of the events that took place at that time Germany: “At the present time it has become absolutely clear that the proletarian coup in Germany is not only inevitable, but already completely close - has moved very close ... The conquest of fascism by broad sections of the petty bourgeoisie is extremely hampered by the correct tactics of Ge Romanian Communist Party. ... For Soviet Germany, an alliance with us, which is very popular among the broad masses of the German people, will be the only chance for salvation. On the other hand, only Soviet Germany is able to provide an opportunity for the USSR to resist the onslaught of international fascism and to speedily resolve the economic problems we face. This determines our position in relation to the German revolution. "

Further, the document gave detailed instructions regulating the activities of local party bodies in the process of informing the public about events in Germany: “The Central Committee considers it necessary: ​​1. To focus the attention of the broadest workers and peasant masses on the German revolution. 2. In advance to expose the intrigues of our external and internal enemies, linking the defeat of revolutionary Germany with the new military campaign against the workers and peasants of the Soviet republics, with the complete defeat and dismemberment of our country. 3. To consolidate in the minds of every worker, peasant and Red Army man the unshakable confidence that the war that foreign imperialists are preparing to impose on us and, above all, the ruling classes of Poland, will be a defensive war for the preservation of land in the hands of the peasants, factories in the hands of the workers, for the very existence worker-peasant government.

Agitprop company in connection with the international situation should be conducted widely and systematically. For this purpose, the Central Committee offers you: 1. Put on the agenda of all party meetings (general, district, cells, etc.) the issue of the international situation, highlighting every stage and turn in the events that are now at the center of international life ... 5. To take all measures for wide coverage of the issue in the press, guided by the articles printed in Pravda and sent from the Press Bureau of TS.K. 6. To organize rallies at enterprises in order to lighten the present international situation with the utmost masses of the working class and to call the proletariat to be vigilant. Use delegate meetings of female workers. 7. Special attention should be paid to the coverage of the international situation among the masses of the peasantry. Broad peasant meetings about the German revolution and the threatening war everywhere must be preceded by meetings of party cells, where they exist. 8. The speakers ... very carefully instruct in the spirit of the general party line outlined by the last party meeting and the instructions of this circular. In our propaganda ... we cannot appeal only to internationalist feelings. We must appeal to the vital economic and political interests ... "

To maintain the confidence of Soviet citizens in the imminent development of the world revolution, newspapers regularly published articles about the growth of the labor movement both in England and in France, and even in the United States, although it was at this time that the period of “prosperity” began - i.e. "Prosperity"!

In the 1925 year at the XIV Congress of the RCP (b), in his report, Stalin was forced to recognize the stabilization of the political and economic situation in capitalist states and even spoke of the "period of ebb of revolutionary waves." However, in the same speech, he declared "the instability and internal weakness of the current stabilization of European capitalism." At the XV Congress of the CPSU (b), he noted the growth of the economy of capitalist countries, but in spite of the facts and figures he cited, he said that "there are some countries that do not go, but leap forward, leaving behind the prewar level," and insisted that “The stabilization of capitalism from this cannot become durable,” and the newspapers immediately picked it up!

The dangerous consequences of such a distorted coverage of events abroad was already realized in those years. So, G.V. Chicherin, who served as Commissar for Foreign Affairs, wrote a letter to Stalin in June 1929 of the year that similar trends in the coverage of foreign events in Soviet newspapers were “outrageous nonsense.” At the same time, he added that the false information from China led to the mistakes of 1927 of the year, and the false information from Germany "will bring incomparably more harm."

Publications about life in the country were still fairly objective in nature, the main thing was to conduct a “party work”. “First of all, we rebuilt the party work,” the reporters of the Beacon of the Revolution factory reported on the pages of Rabochaya Penza newspaper, “since there was no owner on the car, the party organizer of the brigade was the party organizer. Troshin Egor. We reelected the partorga because the networker, in our opinion, should be one of the corners of the triangle on the car. ” To understand what is at stake is absolutely impossible, except that the party work at the enterprise was! But what is strange is that, according to Pravda, the increase in unemployment abroad was caused by nothing more than rationalization of production — that is, thus, to which she herself called on the workers of her own country!

Pravda did not write anything about the 1932 famine of the year, but it reported famine in capitalist countries under headings that spoke for themselves: “Hungry England”, “President of Hunger - on the Tribune”. According to reports of the Soviet press, things were no better in the USA or the USA, where "hunger is stifling and mass unrest is growing by leaps and bounds: a hungry campaign against Washington threatens to exceed the size and determination of a veteran's campaign." The picture of life in foreign countries was so bleak that, judging from the newspaper headlines of those years, the consequences of the economic crisis were everywhere and literally everywhere were the speeches of the working people dissatisfied with their plight.

That is, the world revolution was so clearly on the threshold that it was not surprising why Makar Nagulnov in M. Raised Tselinus, M. Sholokhov, began to study English. He felt from the tone of the Soviet newspapers that it would not start today or tomorrow, and that was when his knowledge would come in handy! After all, "in Soviet Ukraine - a rich harvest, and in Western Ukraine - extreme crop failure" - that is, even nature was "for us"!
When the 18th Congress of the CPSU (b) took place in Moscow in March 1939, Stalin again said that "a new economic crisis began, which seized, above all, the USA, and after them - England, France, and a number of other countries." He described these countries as “non-aggressive, democratic states”, and called Japan, Germany and Italy in his speech “aggressor states” that unleashed a war. V.M. Molotov during his opening speech at the congress, as well as the deputies of the congress.

But the tone of the newspapers changed dramatically immediately after the conclusion of the Soviet-German non-aggression pact 23 August 1939. Articles describing the horrors of the Gestapo disappeared, criticism was heard against Great Britain, France and the United States, and articles appeared about the bitter share of ordinary Finns "under the yoke of Finnish plutocracy." Materials appeared from which it was clear that the main instigators of the new war were not Germany, Italy, Japan, but England and France. It was Great Britain and France that, according to Pravda, hatched plans for war against Germany. Meanwhile, such fluctuations in the information flow are always very dangerous, since they hint at press engagement and own fluctuations in the country's leadership. The flow of information should be more neutral, more indifferent and consistent.

But the worst thing is that vague ideas about the realities of life in the West were not only ordinary citizens of the USSR, but also representatives of the country's political elite, and, in particular, Molotov himself, who was the Chairman of the Council of People's Commissars since 1930, and the People's Commissar of Foreign Affairs from 1939. . For example, in the spring of 1940, the German ambassador von Schulenburg reported to Berlin that "Molotov, who has never been abroad, is experiencing great difficulties when dealing with foreigners."

Reading Soviet 30 newspapers, the thought involuntarily arises that the authorities of the country and its party apparatus did not trust their own people, and apparently believed that truthful messages did not come to him because they are not profitable for the party. That is, they acted, as the authorities of Oceania in the novel by G. Orwell "1984". Obviously, this should have been evident to many (for example, to academician Vernadsky, she definitely threw herself!), And this resulted in a gradual erosion of confidence in propaganda in the country as a whole. Well, the fact that the “world revolution” for some reason will not start at all, saw almost everything!