November 12 2015
59
The chief of staff of the US Army, General Mark Milli, called Russia "the greatest threat" to America. As if dictating, Russia was immediately informed about the “top-level threat” from Great Britain. As part of the new national security strategy, London is preparing to recognize Russia as a threat of a higher order. The founding strategy paper will be presented by November Prime Minister David Cameron on 23. 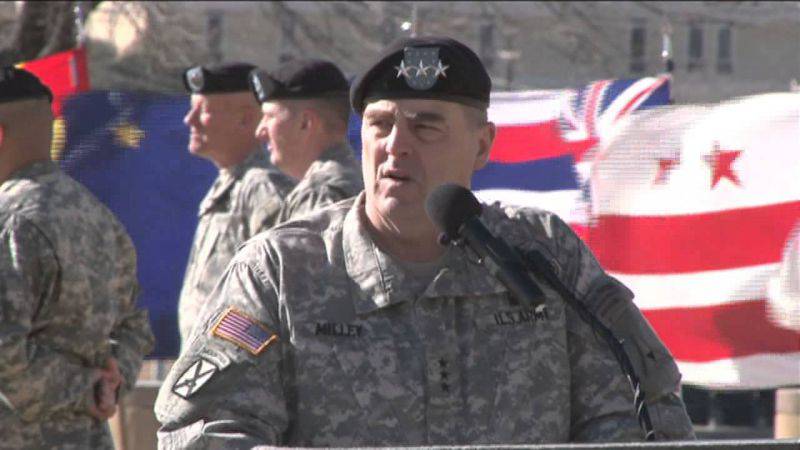 Recall that in early November at a forum dedicated to the issues of "defense", the head of the US Army headquarters, General Mark Milli сказалthat Russia is the “biggest threat” to the United States. The general doesn’t like Moscow’s aggressive behavior. However, in the event of war, the United States has “pretty good” chances of winning, Mr. Millie believes.

According to him, Russia is the first enemy of the United States because "it is the only country on Earth that has the ability to destroy us from the point of view of the nuclear potential," and still Russia is "acting aggressively" in Ukraine and "in other countries."

Milli is convinced that America needs to maintain "military power." He called the readiness of the US military machine to resist threats his “main concern”. At the same time, Milli intends to fight with enemies not by number, but by skill. The general promised to "build up" the qualitative advantages of the army, since "this is better than a quantitative advantage."

A few days later, US Secretary of Defense Ashton Carter spoke. He made his speech at the National Defense Forum held at the Reagan Presidential Library. Listeners were invited national security experts and Pentagon officials.

As noted by US News and World ReportMr. Carter accused Russia of threatening the “world order” by reminding the audience of the “invasion of Ukraine” and the “irresponsible statements” of the Russians about nuclear weapons.

He also said that the US defense department is looking for ways to restrain Russia's “aggression”. The Pentagon will protect not only their native America, but also "American allies."

Mr. Carter noted that Russia is everywhere: Russians “act riskyly” at sea, in the air, in space, in cyberspace, and so on. "Moscow's stinging nuclear weapons"Also scares Carter. The Secretary of Defense is not sure that the Kremlin is going to fulfill its commitments regarding “strategic stability”.

Russia, according to the minister, carries out “provocations” in Europe and the Middle East. In Europe, she violated the sovereignty of Ukraine and Georgia, and also “tried to intimidate the Baltic states”. And in Syria, Russians “add fuel” to the flames of civil war.

American "combat forces and means" today are adapting to implement the "strategy of deterring Russian aggression." The Secretary of Defense said that the United States is now investing in technologies that are crucial for countering "Russian provocations."

The publication indicates that the allegations of the head of the Pentagon were the "most hard" attacks against Russia for all the time that the person was in office as minister of defense.

London was also a famous member of a single “union” choir, singing about the “Russian threat”. Of course, the American Mr. Carter is ready to defend the allies, but trust in God, but do not commit it. And so the British developed a new plan to contain the Russian "threat."

The Times wrote that Russia was among the main threats to the national security of Great Britain. Together with her, the British are threatened by the terrorists of the “Islamic State”, the Ebola virus and the massive influx of migrants to Europe. As indicated "Lenta.ru", Russia was added to the list on the basis of which the national security strategy of the state is compiled.

Premier D. Cameron is due to submit a November 23 document.

According to an unnamed source in the government, Russia was on the list of the main threats because of the policy towards Ukraine, the expansion of the military presence in Kaliningrad and operations in Syria.

RBC Recalls that the UK authorities present a national security strategy every 5 years. The previous report was published in October 2010, and Russia was not mentioned in it. The interlocutor of The Times told something about the current “aggression” of Russia: “Since 2010, Russia has become more aggressive, more authoritarian and nationally oriented, it is increasingly becoming in opposition to the West.”

Among the examples of "aggression" and "national orientation" the source called "the annexation of the Crimea in 2014 year."

Russian experts believe that British statements about "threats" are propaganda, part of the information war.

“The Russian Federation in the secret parts of the conceptual documents of the United States, Great Britain and a number of other Western countries is already indicated as the main adversary. For us, these revelations are not news- told the newspaper "Sight" Director of the Russian Institute for Strategic Studies (RISS) under the President of Russia, Lieutenant-General of the SVR Leonid Reshetnikov. - Now it is transferred to the public sphere. After our action in Syria and the situation in Ukraine, the West declared us an informational and economic war. This is part of the same line: there is pressure on Russia. ”

The Lieutenant General does not believe that Britain has reason to call Russia the main threat to national security: “What grounds does the UK have to designate Russia as the main threat to national security? No. Moscow in the zone of British interests is not valid. Syria is far away, Ukraine is even further. What threatens them? Only one thing threatens - disobeying their line and politics. These are purely demonstrative and informational steps. They cannot do anything concrete. ”

Associate professor of foreign regional studies and foreign policy at the RSUH, political analyst Yevsey Vasilyev told the publication that including Russia in the list of major threats demonstrates “Euro-Atlantic solidarity”: “In the UK, there is a practice when writing conceptual strategy documents - to give each threat a level of danger. The previous strategy was adopted in 2010 year, the current has been significantly revised. The main reason for Russia's inclusion in the list of major threats, in my opinion, is Moscow’s pursuing an independent and sovereign foreign policy in its national interests. Moreover, London by its actions once again shows its Euro-Atlantic solidarity with its main ally and partner - the United States. Britain has no independent military policy. ”

What can Moscow answer? The political scientist suggests that Moscow’s reaction “will be through diplomatic channels.” “Perhaps,” he said, “the activities of the British Council at the British Embassy in Moscow will be tightened.”

The activity of Britain in the search for "threats", we add from itself, is not surprising. The opposite would be surprising: if London had not said anything after Carter and Millie's statements. “Partners” would not understand this.

Observed and commented on Oleg Chuvakin
- especially for topwar.ru
Ctrl Enter
Noticed oshЫbku Highlight text and press. Ctrl + Enter
We are
Results of the week. “Annushka has already bought sunflower oil, and not only bought it, but even poured it”Situational analysis of the death of the MH17 flight (Malaysian Boeing 777), made on the basis of engineering analysis from 15.08.2014
Military Reviewin Yandex News
Military Reviewin Google News
59 comments
Information
Dear reader, to leave comments on the publication, you must to register.