November 15 2015
8
In October, the 1941 of the year, when the front rolled to Moscow at a distance of a cannon shot, it was decided to evacuate government agencies and foreign diplomatic missions to Kuibyshev. So, the city on the Volga became a temporary (until August 1943 of the year) capital of the state. 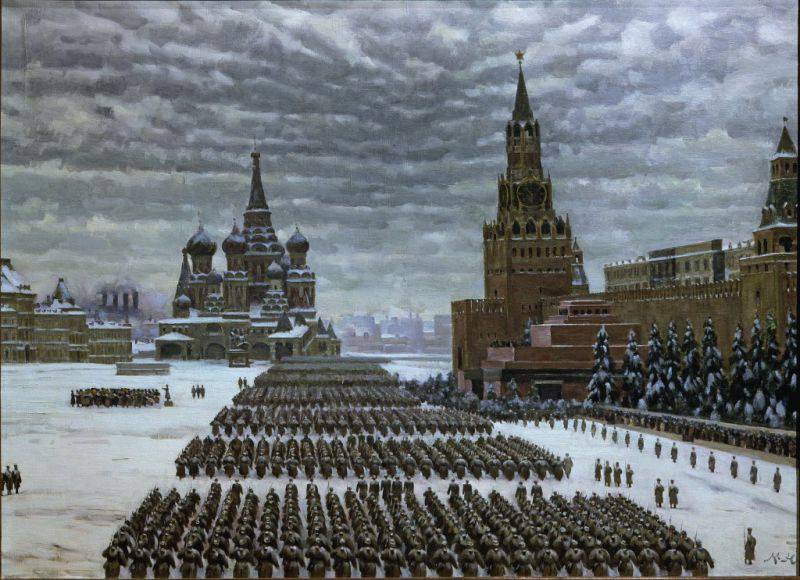 Parade on Red Square 7 November 1941 of the year. Hood Konstantin Yuon
It is not surprising that it was here on November 7 of 1941 of the year that the country's main military parade was held on the occasion of the 24 anniversary of the October Revolution. The parade was attended by selected units of the Volga Military District - in total over 50 thousand soldiers and hundreds of military equipment. Commander-in-Chief, Lieutenant-General Maxim Purkaev, received the parade Marshal of the Soviet Union Clement Voroshilov. Military attaches and journalists of foreign countries watched with curiosity during the passage of military columns and, judging by the newsreel shots, were surprised by the power of the Red Army.

Simultaneously with the resettlement of the government and diplomats in the vicinity of the city was a large-scale construction. Several lines of defense were erected around Kuibyshev. The remains of fortified areas are still preserved in the territory of Ulyanovsk, Penza and a number of other areas. A total of 1941 thousand people were involved in the construction work in the autumn of 300.

For the Supreme Commander, I mean for Stalin, a study was equipped in a five-story building in the very center of the city - opposite the local drama theater. At the beginning of the 1940s, this building housed the headquarters of one of the combined-arms armies deployed in the Volga region, and after the war the Kuybyshev regional committee of the party. So the building was equipped with all necessary communications. In it on the second floor and prepared a study for Joseph Vissarionovich. And under the building, at a depth of more than meters in 30, the construction of a bunker for the commander in chief began - in case of air raids and any other abnormal situations.

According to the terminology of that time, Stalin's bunker was called in the documents “object number 1”.

Parade in Kuibyshev 7 November 1941 of the year
Construction was carried out in an atmosphere of secrecy. They say that the land was taken out from under the building at night in special bags, so as not to attract attention. It is not surprising that residents of the city learned about the Stalinist bunker in the center of Samara only at the beginning of the 1990s, when “object number 1” was declassified.

Stalin's bunker is a huge seven-story structure, buried underground and protected from a direct hit by a four-meter-high concrete slab from a bomb. The first (from the surface of the earth) six floors are technical premises where air purification equipment and other vital systems are installed, as well as security and service rooms. On the lowest floor there is a meeting room of the State Defense Committee (GKO) and Stalin’s rest room - a small room with a desk, a leather sofa and a portrait of Suvorov on the wall. All floors are connected by a five-meter diameter vertical shaft. There were no elevators initially, but the stairs and the height of the steps were thought out so that even a man of advanced age could rise from the lowest floor to the surface (Stalin, we recall, in the fall of 1941, when the bunker was built, was over sixty). In addition to the main builders also made a spare shaft, which in the case of force majeure, you can climb to the surface.

At that time, Stalin’s bunker in Samara was the deepest and safest of its kind in the world. Only one organization could build such a miracle in those years - the Moscow Metrostroy. That is why at the end of 1941, six hundred of the best metro-builders' specialists were urgently sent from Moscow to Kuibyshev. Working seven days a week, in several shifts, the builders managed to complete the “object number 1” in record time - in nine months. The bunker was designed by the famous Soviet architect and engineer Julian Ostrovsky, the author of several stations of the Moscow metro. By the way, the meeting room of the “facility number 1” looks very much like the Airport station, which Ostrovsky built on the eve of the war.

It is interesting how the author of the project solved the problem of a closed space, which is very relevant for such underground structures. In the rest room of Stalin, for example, very modest in size and decor, Ostrovsky made as many as six doors. Of these, only two were workers, the rest were just props on the wall. But it was the presence of these elements in the design of the room that made it visually more spacious and psychologically comfortable. You are in it - and you do not feel that you are sitting at a great depth, actually immured under concrete slabs. In addition, along the walls, between the doors, Ostrovsky ordered to stretch cloths of blue color, which also had a positive effect on the psyche.

However, Stalin never once used his Samara bunker, since he never came to Samara. Even in the autumn of 1941, when many top and top managers dragged from Moscow, Stalin did not go east and remained in Moscow throughout the war. However, the rumors about some kind of secret refuge of the leader, where he allegedly sat out in the most dramatic moments of the war, still go. Even during the war, German intelligence, trying to calculate the location of the reserve command post of the Headquarters, concluded that it was located somewhere near Kuybyshev, in the Zhiguli Mountains. According to German intelligence, it was there, in the rocks, that the Russians, they said, managed to cut out the whole city, where Stalin and his inner circle were hiding. 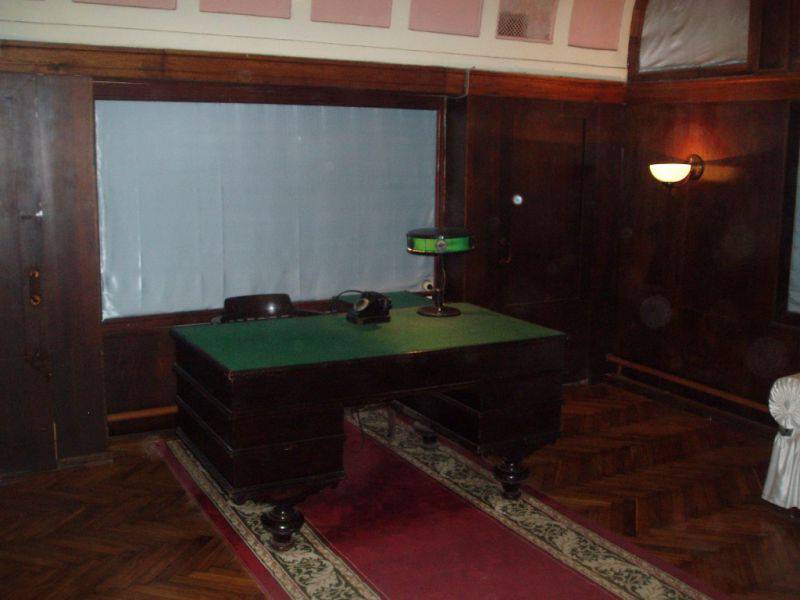 Joseph Stalin's Cabinet in the underground bomb shelter
This version was eagerly picked up during the years of "perestroika" by domestic fans of sensations. It was rumored that convicts built this underground city in the mountains on the eve of the war, that everything was there for a full life for several years and Stalin regularly visited Kuibyshev to visit his daughter Svetlana, who was evacuated along with the government and the diplomatic corps.

The fact that there are voids in the Zhiguli Mountains is an indisputable fact. Holes in the rocks on the right bank of the Volga River are visible to this day, if you sail on a boat near the shore. But they have nothing to do with Stalin and his secret refuge. This is the result of stone mining, which has been conducted in the Zhiguli Mountains for many years. Until now, there works a plant for the production of cement and gravel for construction purposes, one of the largest in the Volga region.

But the underground city on the eve of the war really began to build. True, not in the Zhiguli Mountains, but in Kuybyshev itself. Even before the war, Kuibyshev was considered as the reserve capital of the country in case Moscow had to surrender to the enemy. In the autumn of 1940, to the great surprise of the inhabitants of the city, towers with submachine-gunners appeared on one of the central squares, and the territory was surrounded with barbed wire. Day and night in the fenced area building was in full swing. The official version is the new building of the Kuibyshev Drama Theater. However, the theater was not the main goal of the builders. An underground bomb shelter was erected here for the top state leaders. Thus, Stalin's bunker, designed later by Ostrovsky, became part of a huge underground structure, located under the central part of the city.

Today even ordinary residents of Samara know that there is something under the ground. Although the true scale and purpose of this underground object still remain a secret sealed with seven seals. 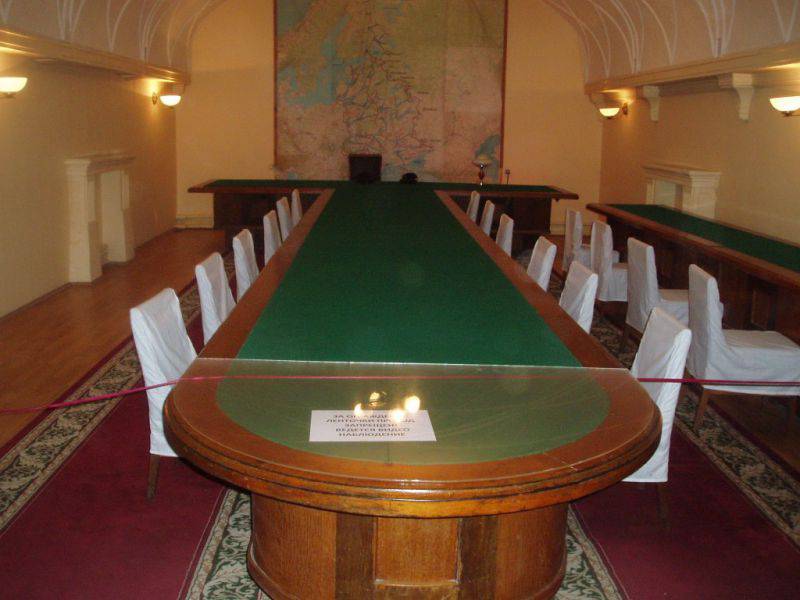 Meeting room of the State Defense Committee in the underground bomb shelter
As for the well-known parade on Red Square in Moscow 7 November 1941, like any landmark event, it is enveloped in many legends.
For example, many believe that fresh divisions arrived in the capital from Siberia and the Far East took part in the parade. Passing through Red Square, the troops, to the sounds of the “Farewell of the Slav” march, went to the front, which was then literally 30 miles from the Kremlin. This is not entirely true. On Red Square on the morning of November 7 were soldiers and officers of the army. Among the units of the Moscow garrison involved in the parade was the well-known Dzerzhinsky internal forces division, which at that time had distinguished itself in battles on the near approaches to Moscow. November 7, three regiments of the division marched on the cobblestones of Red Square and marched tank battalion.

The march “Farewell of Slav”, contrary to popular opinion, was not performed at the parade. Yes, and could not be executed, because in the 1940-ies was banned. Rehabilitated "Slav" only in 1957 year, after the resounding success of the film "The Cranes Are Flying". But march author Vasily Agapkin was present at the parade. In November, 1941, Agapkin served as a military conductor of the same division named after Dzerzhinsky and bore the rank of tenant of rank 1. It was he who led the combined orchestra of the troops of the Moscow Military District, which inspired the parade participants.

Preparations for the parade began in late October, but until the last moment it was not completely clear whether it will take place at all. Everything depended on the weather. If the sun was shining on the morning of November 7, the idea of ​​a parade would have to be abandoned - the Luftwaffe bombers would have been enough for ten minutes to reach Red Square. And only late in the evening on November 6, when meteorologists reported to Stalin that it would be overcast in the morning and it would snow, the leader made the final decision to hold a military parade. 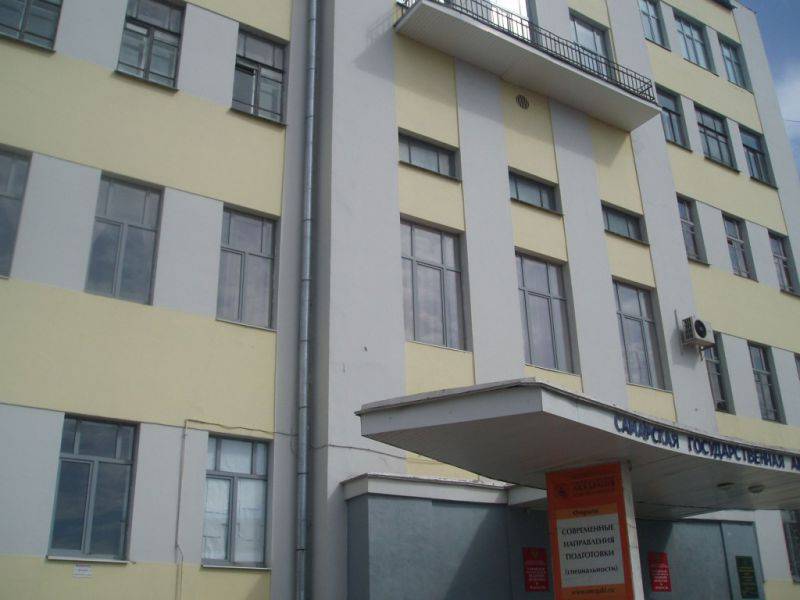 In this building on the second floor, the office of Comrade Stalin was equipped.
By the way, about the leader. There are still disputes over whether Stalin was on Red Square that morning, or his speech, recorded in advance in the studio, was broadcast to the parade participants. However, in the end it is not so important. More importantly, it was on the morning of November 7 that Stalin’s speech formulated the main ideological guidelines with which the army and the people fought for the next three and a half years.
All in all, on that day, November 7, 1941, three military parades took place in the USSR: in Moscow, Kuibyshev and Voronezh.

Ctrl Enter
Noticed a mistake Highlight text and press. Ctrl + Enter
We are
Diplomats of the People's Commissariat of Defense: on the eve and during the warThe history of military parades on Red Square
8 comments
Information
Dear reader, to leave comments on the publication, you must to register.