November 17 2015
60
Almost as early in India they began to tame and use elephants in combat practice. It was from here that they first spread throughout the ancient world, and in India they were used in battles right up to the middle of the 19th century! An elephant is a very intelligent and exceptionally strong animal that can lift large weights and carry them for a long time. And it is not surprising that they have been used in war for so long. 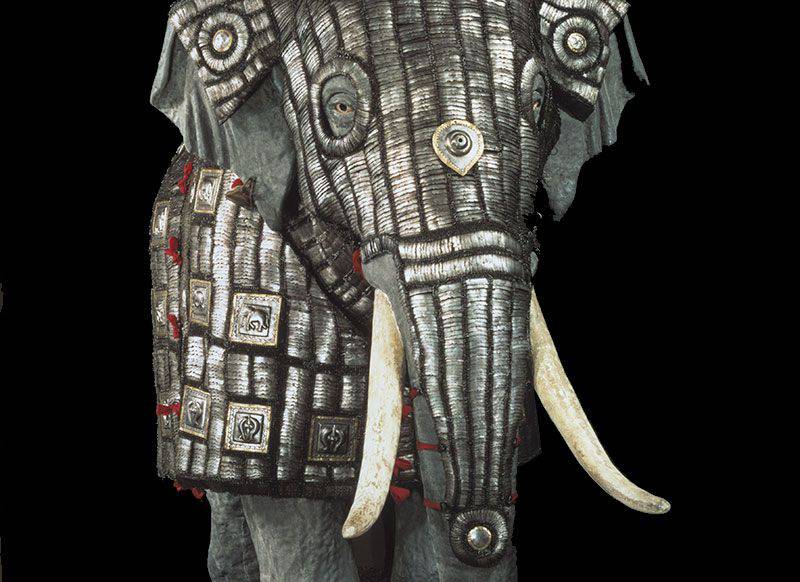 In the times of the ancient Punic Wars, the Ptolemies and the Seleucids already had entire detachments of specially trained war elephants. Their “crew” usually consisted of a drover who guided an elephant and knew how to cope with it, and several archers or spearmen with long spears and darts who sat on his back in a kind of fortress tower made of boards. Initially, even the very fact of their appearance on the battlefield frightened the enemies, and the horses of one of their kind were furious and threw off the horsemen. However, very soon in the armies of the ancient world they learned to fight with battle elephants and began to use them with great caution, because it was already more than once that huge animals fled from the battlefield and trampled on their own troops.

To protect the elephants from the enemy weapons, in the same way as horses, they began to be covered with protective shells. The earliest mention of the use of elephants in protective weapons refers to 190 year BC. Oe., when they were used by the army of Antiochus III the Great of the Seleucid dynasty in the battle of Magnesia against the Romans. Despite the bronze armor plates, the elephants that had become unmanageable during the battle turned to flee and crushed their own troops ...

In the 11th century in India, Sultan Muhmud of Ghaznavi had 740 war elephants who had armorheads. In one of the battles against the Seljuks, the Indian Arslan Shah used 50 elephants, on their backs sat four mail-clad spearmen and an archer. Enemy horses at the sight of elephants began to rage, but the Seljuks still managed to repel the attack, hitting the leader of the elephants in the stomach - the only place that he did not have covered with armor.

In his march on Delhi in 1398, Tamerlane also met with elephants dressed in chain armor and trained to snatch riders from saddles and throw them to the ground. Elephants were usually placed in front of the troops and invulnerable to swords and arrows with a dense line of attack on the enemy, which threw him into fear and horror, forcing even the most worthy to flee. 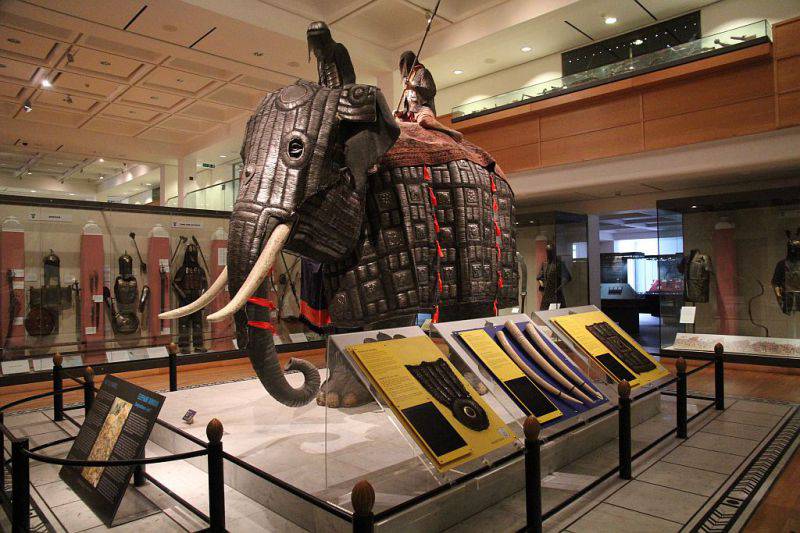 "Elephant from Leeds". View from the side where the armor is preserved more.

The army of Tamerlan was hard, because the elephants of the Hindus were not only archers, but also throwers of grenades, bannas, producing a terrible roar, as well as rocket men with missiles from bamboo pipes. Nevertheless, the victory was left for the warriors of Tamerlane, who managed to get arrows on the elephant drivers. Feeling no longer a solid hand of man, in the roar and under the fierce blows that fell on them from everywhere, the elephants, as it happened very often, began to panic and fled. The frightened and enraged elephant was so dangerous for its own troops that even in antiquity every elephant driver had not only a special hook to control the elephant, called ankus, but also a hammer and a chisel, which, if an animal went out of obedience, had to be slaughtered to the head. The elephant, enraged by the pain, was chosen to kill, but not to be allowed into the ranks of its troops.

After that, Tamerlane himself used war elephants in the battle of Angora and won it, despite the fierce resistance of the Ottoman army. Russian traveler Afanasy Nikitin, being in India in 1469, was amazed by the magnificence and power of the Indian rulers, who even went for a walk accompanied by war elephants, Nikitin wrote: "... the sultan left for a walk, and with him 2 great sightings and 300 elephants dressed in damask armor with towers, and the towers are bound. In the towers on the same 6 people in armor with guns and with food, and on the great elephant 12 people. Other contemporaries reported that poisoned spikes (!) Wore elephants' tusks, crossbowmen and chakra throwers were placed on their backs, and warriors with rocket weapons and grenades covered elephants on the sides. In the Battle of Panipat, only the continuous fire of artillery and musketeers made it possible to repel the attack of the elephants who, even with all their weapons, were a good target for gunners and shooters from Babur’s army. 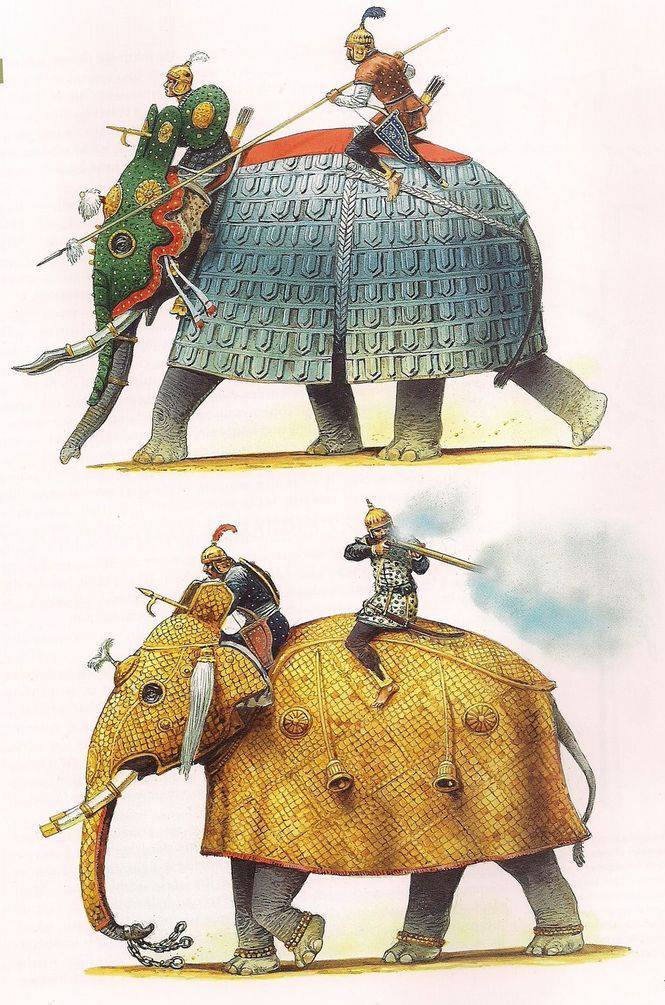 A whole series of images of war elephants of the Mughal era reached our time, for example, in the illustrations of the famous manuscript “Babur-name”. However, the drawings are drawings, but the real armor of an elephant survived only one and now it is located in the British Royal Arsenal Museum in the city of Leeds. Apparently, it was made at the end of the XVI - beginning of the XVIII century. The armor was taken to England in 1801 by the wife of Sir Robert Clive, the then governor of Madras. Thanks to Lady Clive, we know exactly what this unique armor looked like, the result of the gradual (long) development of horse armor. 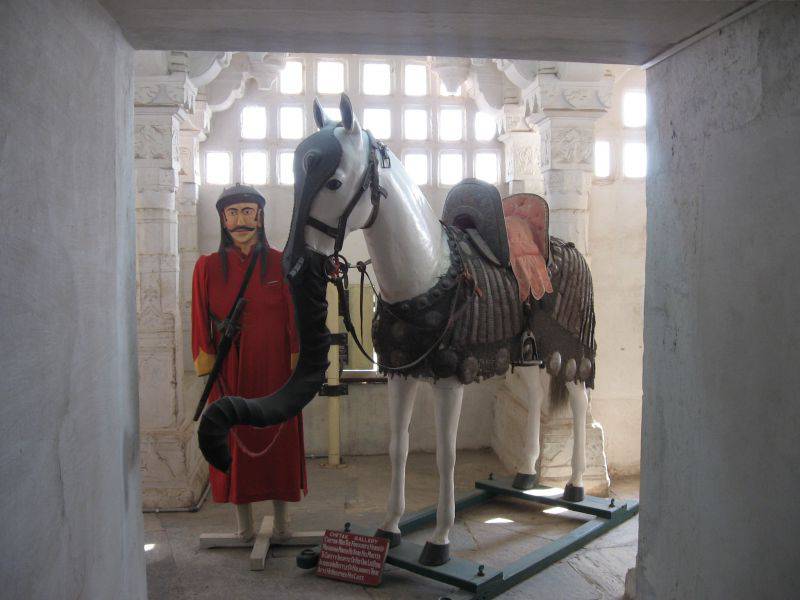 "Elephant Horse". What is it and for what? Alas, it was not possible to photograph and translate the tablet under this strange figure.

Thanks to this armor, we know what the unique protection of war elephants looked like, which became, in essence, the result of the development of horse armor. The armor is a set of small and large steel plates connected with the help of chain mail. Without missing plates, the armor stored in Leeds weighs 118 kilograms. The complete set would have to consist of 8349 plates with a total weight of 159 kilograms! Large square gilded plate of armor covered with chased images of walking elephants, lotus flowers, birds and fish. 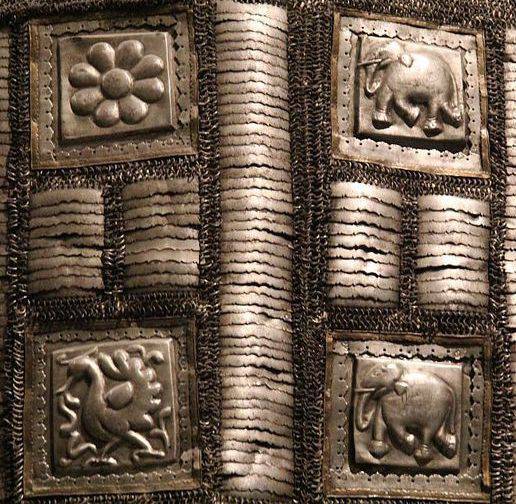 Fragment of the Leeds Elephant Armor.

Perhaps only these plates were visible from the side, while the rest of the armor was covered with a cloth cloth with square cuts. All square plates were lined with cotton pads. Details of the armor, which consisted of several parts, were put on the elephant on top of the linen lining. The side parts had leather straps that were tied to the elephant on the sides and on the back.

Leeds' elephant head protection consists of 2195 plates of 2,5 size to 2 centimeters connected vertically; around the eyes the plates are arranged in a circle. Her weight - 27 kilograms, it is attached to the ears of an elephant. The armor has two holes for the tusks. Two thirds trunk is not protected. The throat and chest protection weighing twelve kilograms has a lower jaw cut in the middle and consists of 1046 plates measuring 2,5 by 7,5 centimeters. The mounting of these plates is such that they come one upon the other like shingles. 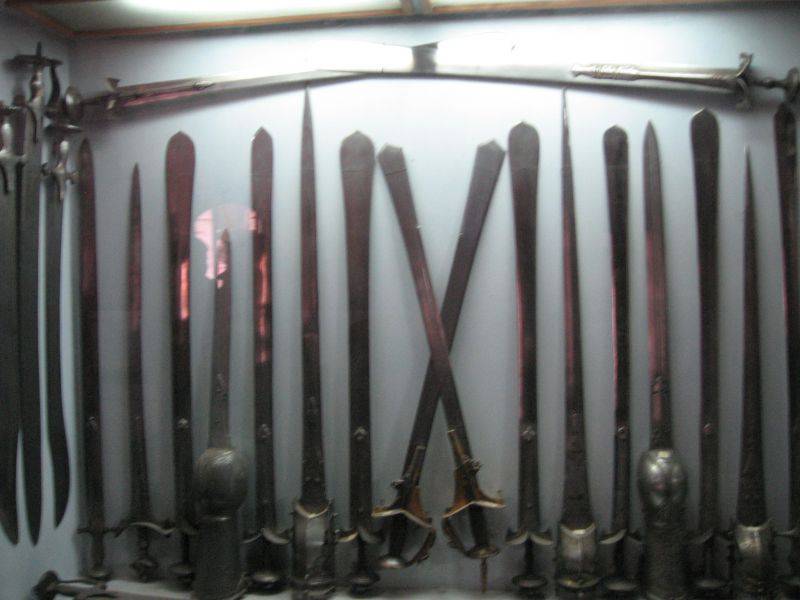 Indian swords. Some have a gun at the base of the blade.

The front panel is decorated with chased plates; on five plates are depicted war elephants, on one - a lotus, on one - a peacock and on the four lower ones - fish. On the plates of the central panel - seven elephants, lotus, peacock and three pairs of fish. On the back - seven elephants and four pairs of fish. All the elephants on the plates are oriented in the direction of travel headfirst. That is, taking into account the total number of plates and the chain mail weaving that connects them, it can be said with confidence that we have a typical baxter in front of us; 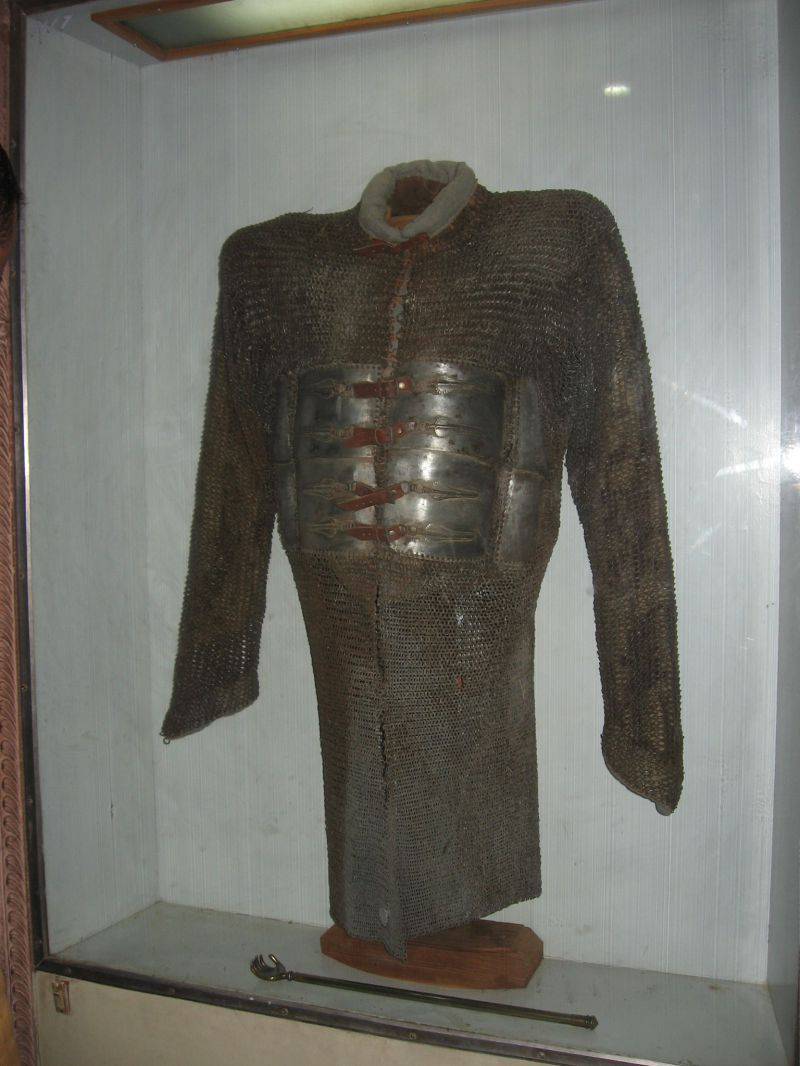 It is possible that some warrior, who also sat on an elephant, wore such armor. Who knows?

Interestingly, on the figure of an elephant, recreated in Leeds, his back over the shell is covered with a regular carpet and it is on him, and not in some kind of "bound tower", that a single warrior spearman sits behind the driver. True, there is a photograph of the Royal Archives, dated 1903 year, which also depicts an elephant in an armor of metal plates and armor scales, sewn on a fabric base. So on his back is visible a small platform with sides, in which soldiers could easily be placed. In addition to the protective armor on the elephant was put on and "weapons" - special metal tips on the tusks; it was truly a terrible weapon. Only one pair of such tips has been preserved, brought to England from Garbage, where it was in the arsenal of the Maharajah Krishnaraji Vadiyar III (1794 –1868). In 1991, one tip from this pair was offered for sale at Sotheby's [1] auction.

The last battle elephant armor is also stored in England, in the hometown of William Shakespeare, Stratford upon Avon, in the Stratford Arsenal Museum. However, this armor is significantly different from the armor from Leeds in that, on the contrary, it is made of very large plates that cover the head, trunk and sides of an elephant, and on its back there is a turret with four pillars and a roof. On the front legs - large plates with spikes and only ears covered with plate armor, similar to that found on an elephant from Leeds.

Thus, the elephant armor was developed (or, at least, kept in the arsenals of India) for a very long time, and even then, when they proved their complete hopelessness, as well as the battle elephants themselves. The fact is that with all his skill in the training of an elephant, a person is physically unable to cope with it. Any misstep mistake on the battlefield, the nervousness of the elephants themselves, which are quite easily panicked, the skillful actions of the enemy - all this could very easily lead the war elephants to exit obedience. In this case, they turned into a “Doomsday weapon”, using which the commander put everything on the map in the most decisive way.

So, the knightly "cavalry on elephants" in the East did not appear for several reasons. First, being on an elephant, the warrior was subjected to heavy shelling by the enemy, and secondly, it was extremely dangerous to be on the back of a running, distraught elephant, as, incidentally, to fall from it. 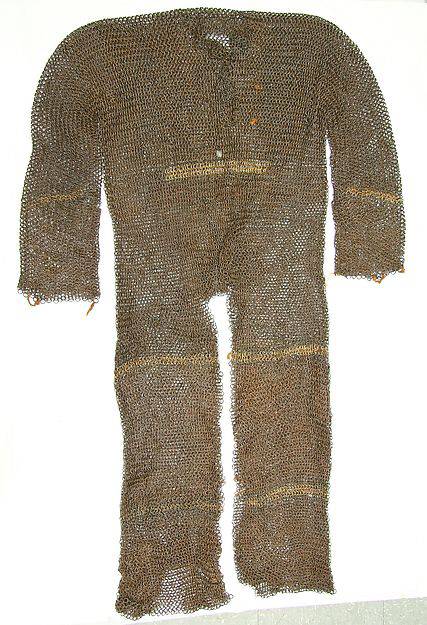 That is why Indian rajas and sultans, if they were riding on elephants during the battle, then used them exclusively as mobile observation posts, and preferred to fight and retreat on horseback — not so strong, but faster and more easily manageable. On the backs of war elephants were commoners - archers and musketeers, throwers of chakras, darts, warriors with rockets (the last Indians used so widely and successfully in battles against the British that they, in turn, borrowed this weapon from them). 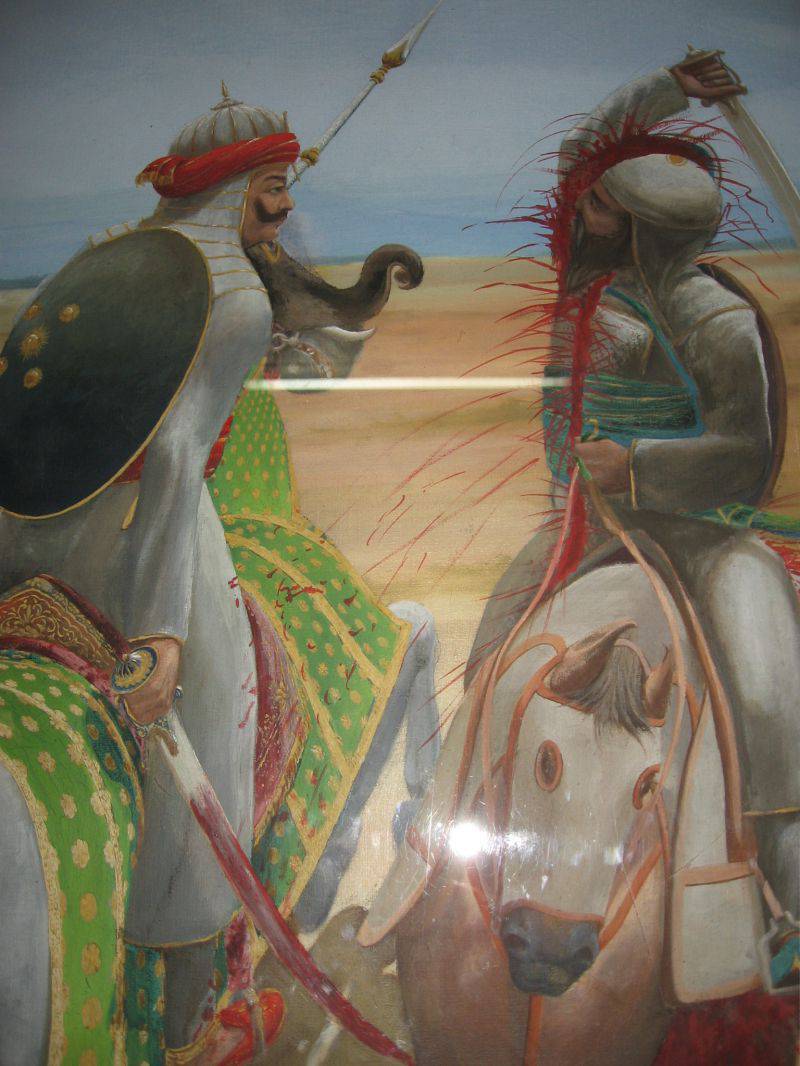 The quality of the Indian Bulat was so great that another warrior was already cut in half, and still struggled to raise the sword!

But, speaking the language of modern times, it was prestigious to have war elephants. No wonder that when Shah Aurangezeb forbade Hindus, even the most noble, to ride elephants, they considered this to be the greatest insult. They were used during the hunt, on the road, with their help they demonstrated the power of the ruler. But the glory of war elephants faded as well as the heavily armed knights in the West, as soon as they were fought by well-trained warriors with muskets and fairly mobile and quick-fire artillery, which they began to use in field combat. Alas, neither the missiles, nor the light cannons on the backs of the elephants did not change the situation, because they could not suppress the artillery of the enemy and ... reach its light cavalry, which now more and more often began to be armed with all the same firearms.