November 13 2015
8
According to the press service of the Western Military District, at the beginning of next year, a separate team of radiation, chemical and biological protection of the VZO stationed in the Kursk Region will receive a new special equipment. In the first months of 2016, this compound should be upgraded to the latest PXM-6 chemical reconnaissance machines. At present, the personnel of the brigade is being trained and mastering new equipment on the basis of training units, so that it will be able to start using the machines immediately after receiving them.


PXM-6 is the latest domestic chemical reconnaissance machine. This technique is intended to replace existing machines of similar purpose. It is expected that due to the supply of new equipment with a gradual write-off of the existing one, it will be possible to increase the capacity of the RCBZ troops, in particular, to improve their ability to detect and identify various threats. Enhancement of the main characteristics is achieved with the help of a number of major innovations concerning the composition of the equipment and methods of the crew.

The project of the reconnaissance chemical machine РХМ-6 was developed by the specialists of OJSC “Plant Tula”. The project involves the use of the existing chassis of an armored personnel carrier BTR-80, on which it is proposed to mount a set of special equipment to study the situation and search for threats. The onboard equipment complex allows monitoring the situation and detecting signs of a chemical or biological attack, as well as detecting radiation contamination. In addition, automatic monitoring of meteorological conditions with data output to the operator console is provided. At the same time, information on weather conditions and detected threats can be transmitted to the command post. 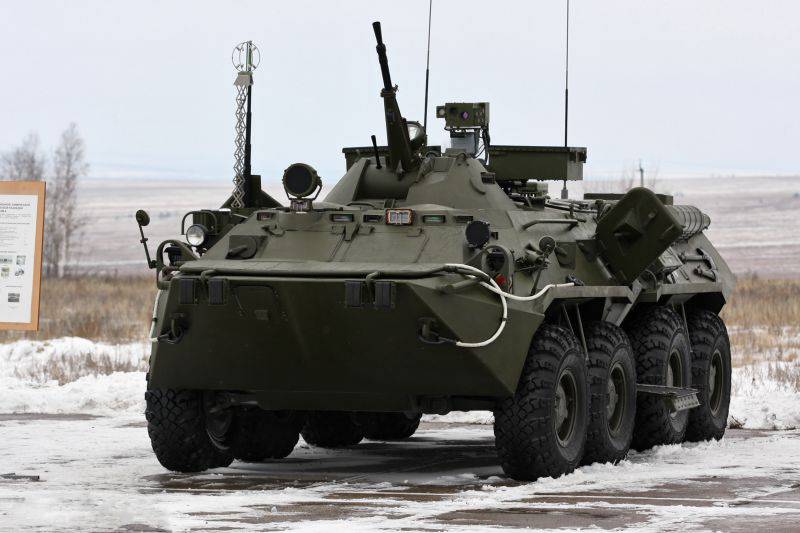 General view of the PXM-6. Photo of Wikimedia Commons

The BTR-6 armored personnel carrier is used as a base for the PXM-80, thanks to which the reconnaissance chemical machine has high mobility and maneuverability. The existing wheeled chassis in combination with a KAMAZ-7403 diesel engine allows speeding up to 70 km / h on the highway. There is also the possibility of crossing water barriers by swimming with the help of a jet propulsion unit. The speed at the same time reaches 10 km / h. Good indicators of mobility and the ability to move through the water allow the crew of the vehicle to explore various areas, including those separated by water bodies.

At installation of the special equipment the case of the basic car undergoes the minimum changes. Thanks to this, the crew of the reconnaissance vehicle, consisting of three people, is protected from small-arms bullets. weapons and light shell fragments. Also saved the tower with machine gun armament. For self-defense scouts can use machine guns KPVT 14,5 mm and PKTM 7,62 mm. On the back of the tower are smoke grenade launchers.

Most of the special equipment is installed inside the armored hull base machine. At the same time, some units remain outside the hull, allowing to distinguish two types of armored vehicles. So, on the right side of the РХМ-6 there is a folding mast of a small height, on which one of the sensors is located. In addition, on the roof, behind the tower, is placed the characteristic rectangular housing of the chemical long-range reconnaissance instrument PCRDD-2B.

For tracking the meteorological situation, the РХМ-6 is equipped with an AMK kit. This equipment allows you to monitor the main factors such as air temperature, wind speed and direction, etc. With the help of the AMK kit, the crew of the vehicle can determine the risks of the spread of toxic or radioactive substances to new territories.

It is proposed to monitor the radiation situation using an IMD-2HM dosimeter-radiometer. In parallel with it, dose rate meters IMD-23 or IMD-24 are used. In the case of work in the areas of radiation contamination, the reconnaissance vehicle can move at a speed of up to 50 km / h without loss in the efficiency of special equipment and the quality of measurements.

The primary means of detecting vapors of toxic chemicals and other substances that are hazardous to personnel is the PCRDD-2B long-range chemical reconnaissance apparatus. The main element of the device is a block of special optical equipment installed on the roof of the РХМ-6 case, behind the tower. In the transport position, the apparatus is closed by a folding casing. Before operation, the casing flaps are lowered to the sides, after which the equipment can begin operation. 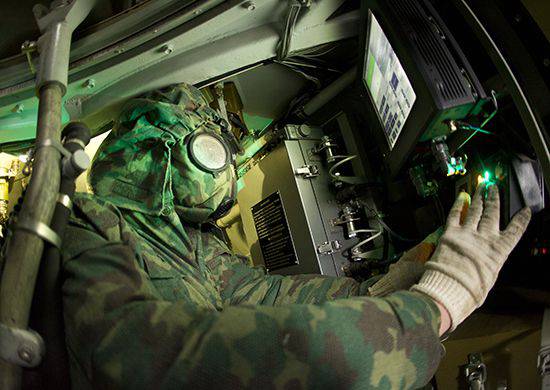 The operator of the complex at work. Photo Mil.ru

Using optical equipment, the PCRDD-2B device is capable of detecting substances dissolved in air at a distance of up to 6 km. The supporting device of the optical unit provides a circular horizontal guidance. It is also possible to tilt the block in the vertical plane from -15 ° to + 45 °. This provides the ability to control different parts of the airspace. With the help of special optical equipment, the PCRDD-2B system can study the situation on an area of ​​about 10 square within one minute. km

Also, the РХМ-6 machine carries a GSA-14 gas alarm, an automatic ASP-13 alarm device, and a KPO-1 sampling kit. One of the main elements of the onboard equipment is the information-navigation system 14Ц834 "Control-2D". Navigation equipment, a radio station for communication with other machines, etc. are also provided.

The equipment of chemical and nonspecific biological intelligence, as well as dosimeters, allows to conduct a survey of the area on the go, without stopping for these or other measurements. However, in the case of such threats, the maximum speed of the reconnaissance vehicle, providing the required survey efficiency, is reduced to 10 km / h.

Having detected an infection, the crew of the РХМ-6 machine can transmit data about it to the command center using the available means of communication. In addition, it is possible to indicate contaminated territory. For this purpose, a throwing device for installing flags is provided in the rear part of the machine. Passing along the border of the infected zone, the reconnaissance vehicle can automatically set flags to warn personnel of the danger.

The latest equipment installed on the machine РХМ-6, allows not only to improve the basic characteristics, but also to facilitate the work of the crew. If necessary, the crew can leave the car to perform some tasks, but the bulk of the combat work is carried out using systems controlled from the existing consoles. Thus, most of the tasks can be performed without the need to leave the machine, which reduces the risks for its crew. In order to avoid poisoning or radioactive substances inside the habitable compartment, the machine is equipped with a filtering unit. In addition, the crew has protective suits that provide additional safety work, as well as allow, if necessary, to leave the car. 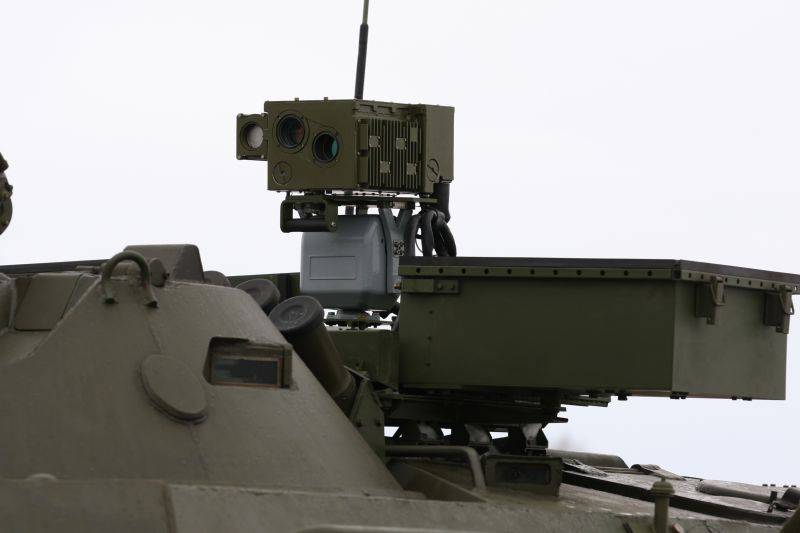 The development of the PXM-6 project and preliminary testing of prototype machines ended several years ago. In 2013, for the first time, the military had the opportunity to familiarize themselves with the new technology, as well as to test it in training conditions. In 2013, one of the formations of the RCBZ troops of the Southern Military District used PXM-6 machines during exercises at the Prudboy training ground. Soon, this technique was able to test the units of radiation, chemical and biological protection of the strategic missile forces.

At the end of 2014, the first delivery of PXM-6 vehicles to the troops took place. A certain number of vehicles of this type were transferred to a separate special-purpose regiment and a separate airborne communications regiment stationed in the Moscow region. In addition, during the past year, similar intelligence chemical machines were built for several other compounds.

According to the latest reports from the Ministry of Defense, the next batch of serial reconnaissance vehicles PXM-6 will go to the troops in the first months of the next 2016 year. This technique will receive a separate team of RCBZ of the Western Military District, stationed in the Kursk region. At present, the personnel of the brigade is studying a new material part and is preparing for the future operation of promising technology.

Over time, the reconnaissance chemical machines РХМ-6 should oust and replace the similar techniques of previous models that are in service with various types of troops. Deliveries of new cars will allow to update the material part of RCBZ units, as well as to increase their potential in detecting various threats and combating them.