Who in Russia suddenly became preoccupied with "historical myths" about the Panfilovites, Zoe Kosmodemyanskaya and the exploit of Alexander Matrosov?

November 11 2015
235
In the network, and not only in the network, the controversy is gaining momentum, which is difficult to ignore. If I may say so, network potentials once again found themselves on opposite sides of the barricades in their relation to historical science, historical events and the very description of history.
A controversy has been initiated by individuals who call themselves “free history” supporters. This is a liberal group, as they say, the creative intelligentsia, which decided to throw a kind of challenge to the well-established and seemingly quite traditional information about those or other periods of the existence of the Russian State (in its different configurations and with different names). What is the essence of the challenge? To understand this, you can refer, for example, to the September publication of the historian Sergei Mitrofanov on the pages "Free Press"titled "What is the Evil of a Patriotic Myth?" 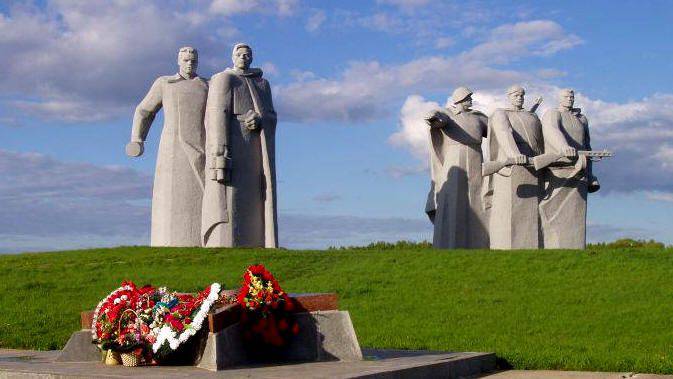 The reader, by clicking on the link above, you can get acquainted with the publication of Mr. Mitrofanov.

If you convey the essence of the publication, the historian (of course, from among the "free") tries to convey to the audience his thoughts that historical fiction, they say, should not be a place in modern historical science. The fact that any unproved episode of history must be removed from historical editions and publications, so that, you understand, do not mislead the younger generation. And in general, history, if you follow the logic of Mr. Mitrofanov and supporters of this same logic, is a science that must stand on the reinforced concrete support of archival data and the testimony of "witnesses" recorded by the "correct" historians.

As an example of what “the younger generation is misleading", the story of 28 Panfilovites who at the cost of their own lives stopped the advancement of German tanks near Moscow. From the publication:

Another unpleasant moment of this discussion is the ease with which the modern man in the street with the ribbon of St. George undertakes to sing the death of his fathers, as if it was the death by order of the command that was the apotheosis of military glory and a wonderful personal realization. Worst of all, he transfers this morality, including to the modern man, forming his militaristic attitude to the world and the agenda.

By the way, it is necessary to think that it was for this purpose that front correspondent Alexander Krivitsky composed an epic about 28 Panfilov’s fight with German tanks at the Dubosekovo junction, where they all died, but did not miss the enemy, for such was the political attitude. It doesn’t matter whether that episode of the war was in reality, wasn’t, but wherever the soldier was, from now on he would follow the example of Panfilov, Zoya Kosmodemyanskaya, Alexander Matrosov without hesitation to die in the name of the regime and on the orders of their commanders. Not only not feeling fear, but also thanks to the fate of being able to distinguish themselves in this way and join the communist saints.

In general, it makes no sense to continue quoting, because the position of Mr. historian Mitrofanov and the presented fragment is clear. But, as modern youth says, the trick is that Mr. Mitrofanov, with his sizzling criticism of “historical mythology,” is far from being the only instance. In Russia, for some time, there is a whole team of “correct historians” who formed the so-called Free Historical Society, for which, forgive, for three miles, it carries “one rifle for three” and “two million German women raped by the Red Army” ... And all these gentlemen and ladies now they are in a position and they are trying to declare that a whole layer of national history is based not on documentary evidence, but on myths composed either by journalists, or “historians-commies”, or by someone else who is not hand-crafted for the liberal scoops. These same ladies and gentlemen are trying to expose themselves as such adepts of historical truth, who “know for sure” that “there was no feat by Alexander Matrosov”, that 28 panfilovtsy “did not die near Moscow”, that Zoya Kosmodemyanskaya’s heroism was “not proved by anyone”. Like, this is all historical mythology, which the “regime” has powdered and continues to powder the brains of the Soviet, and now the Russian, society. They say that we and only we tell you the truth, you can rely on us and only on us when studying our national history, and everything else is a lie, a scoop and a provocation.

Well ... Let us assume that historical science, as its liberal "partners" see it, is strictly archival documents and confirmed facts. Well ... Let the feat of 28 Panfilov near Moscow is an unproved fact. Well ... So, publishers will publish only facts, facts, facts, and based on archival materials, obtained by the light of a green lamp by the same historian Mitrofanov. Wonderful…

Here is just one question: why adherents of the theory of “debunking historical myths” by this term understand only those pages that are written by Russian historians of the Soviet period? Why shouldn't Mr. Mitrofanov take care of the alternative “myth-making”, if he and his supporters tend to call this phenomenon in historiography that way. Well, for example, why not start by dispelling the myth that the Allies really cared about the fate of the Soviet Union and the peoples of Europe enslaved by the Nazis, and that, you understand, it was precisely because of this that the Allies suddenly decided to think about opening a second front ... When a Soviet soldier died he stood near Moscow and in Stalingrad, for some reason the allies were not eager to open a second front, and then, when the fate of the Nazis was clear, immediately bam - sharply expressed concern for the USSR, the enslaved peoples of Europe, the meeting on the Elbe, fraternization, smiles, etc. Veta ... Unless disinterested aid of the West - is not a historical myth that all the post-war years the citizens are fed adherents of liberalism.

Why do not liberal truth seekers try to dispel the myth of the “General Frost,” who, you see, stopped the Nazis near Moscow? Why not answer those crazy publications of a western journalist who, through the press, “told the city and the world” that the Soviet soldiers in Europe 1945 were the only ones who were engaged in “robbing, killing and raping German women”? Why not strike the truth with the historical liberal myth that the “oppressed” Soviet citizens in a single rush in the course of the referendum spoke in favor of liquidating the USSR, and that the economies of the former Soviet republics afterwards showed the wonders of growth, and the republics themselves felt the breath of true freedom and democracy ...

Why do those who are on the other side of the barricades have “claims” exclusively to the Panfilovites, Alexander Matrosov and Zoya Kosmodemyanskaya - that is, who and what is one of the foundations of patriotism, the core of the ideology of self-sacrifice, fraternity and mutual assistance? Why, our liberal, forgive my God, "friends" simply can not open the cards and say that their task is not to squeeze the historical truth, but to once again dab the memory of Victory, the very principles of sacrifice Russian (in the broad sense of the word) people, their desire for unity before a common misfortune. In this regard, such persons can call themselves at least free historians, although advocates of historical truth and morality, but you can’t hide the inside, as they say. Forgive me generously, but it is painfully frank from such “champions” who break into Russophobia as soon as their mouth opens ...

Ctrl Enter
Noticed oshЫbku Highlight text and press. Ctrl + Enter
We are
Results of the week. “Annushka has already bought sunflower oil, and not only bought it, but even poured it”Is there a solution to the problem of patriotic education of young people? Private initiatives
Military Reviewin Yandex News
Military Reviewin Google News
235 comments
Information
Dear reader, to leave comments on the publication, you must to register.