November 11 2015
27
Everyone remembers the proverb about the war and lunch on a schedule. Indeed, without a timely and complete supply of food, a soldier cannot effectively accomplish the tasks assigned, which reduces the combat capability of the entire unit with corresponding negative consequences for the army. The need for cooking in the field, at a great distance from the bases, was the reason for the emergence of a large number of so-called. field kitchens. Over the past few decades, one of the main types of such systems has been the PAK-200 kitchen.


The mobile automotive kitchen PAK-200 was developed in the mid-seventies by specialists from the Central Food Administration of the USSR Ministry of Defense. The aim of the project was to create a full-fledged field kitchen with a set of special equipment that can provide troops with hot food and boiling water when working at a distance from the bases. In 1977, the PAK-200 kitchen was adopted and launched into the series. In the future, this complex was upgraded, resulting in the appearance of its updated version of the PACK-200M. This version of the field kitchen was adopted in 1986 year. The PAK-200 family systems are still operated by the armed forces of Russia and other countries that were previously part of the Soviet Union.

The kitchen PAK-200 has a large number of different equipment designed for cooking. All components and assemblies of the complex are mounted in a standard KUNG-type body van, which can be mounted on various types of chassis. Thus, initially the kitchens of the PAK-200 family were based on the ZIL-131 truck chassis. Later, a modification appeared on the Ural-4320 chassis. The kitchens of the latest editions are built on the basis of the chassis KAMAZ-5350. Thus, the basis for the kitchens of this family can be any truck chassis, the characteristics of which meet the requirements. 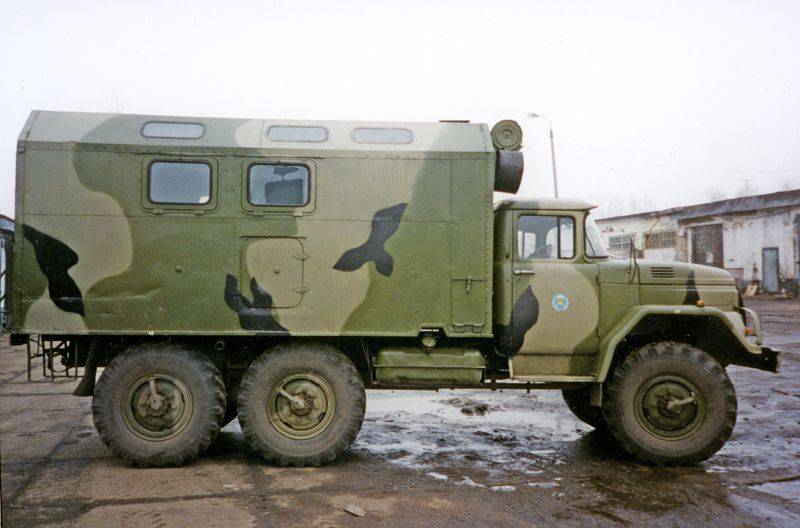 The kitchen of the family PAK-200 on the chassis ZIL-131ю Photo Russianarms.ru

Mobile kitchens PAK-200 and PAK-200М are designed to provide troops with food in the field. The equipment available allows one machine to supply food to 200 people. The most important feature of the family kitchens, distinguishing them from other systems of similar purpose, is the possibility of cooking on the march. The van is equipped with all the necessary equipment that ensures autonomous operation in various conditions.

Inside the van is mounted a set of blocks of special equipment for various purposes. The project envisages several thermal blocks, fuel and water systems, technological equipment, kitchen equipment, etc. In addition, the machine is equipped with a filter unit FVUA-100-24, which allows the calculation to perform its tasks even in contaminated areas.

In front of the van are mounted thermal units. A heat apparatus with three boilers and an oven for preparing hot food is mounted along the front wall. A separate water heater is also provided. The boilers are made of stainless steel and are used to prepare the first and second dishes, as well as to heat water. The heating equipment is made in the form of a pedestal, inside of which there are three boilers and an oven. The latter is located at the left side of the machine, while the boilers occupy the remaining space. On top of the boilers are closed hinged lids, equipped with piping to bring the steam out of the kitchen.

In the modernized version of the kitchen PAK-200, the first-case boiler has a total capacity of 150 l (working - 140 l), for the second one - 125 l (working 115 l). The first dish boiler has double walls with so-called. oil jacket. For more efficient use of thermal energy, 9 kg of AK-15 oil is poured into the shirt. The cauldron for boiling water is the same size as for the first dish. The water heater is equipped with a water tank on the 100 l. 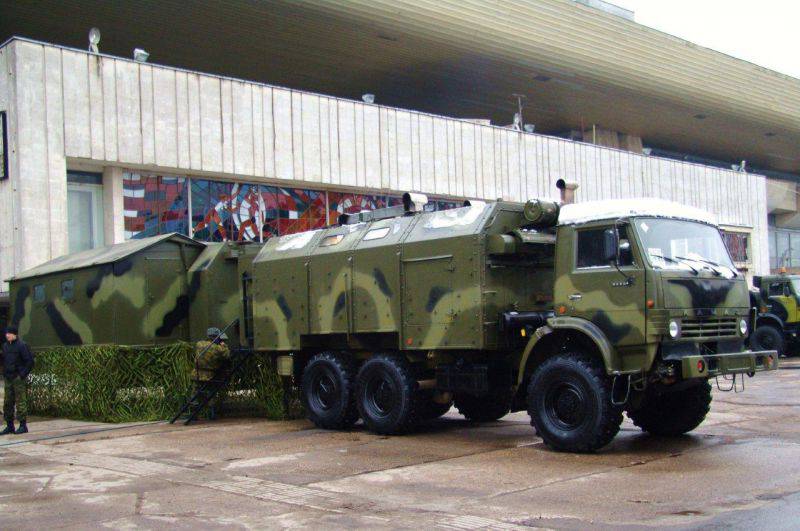 Kitchen based on the chassis KAMAZ-5350. Photo Russianarms.ru

PAK-200 kitchens are equipped with an oven 420 x 300 x 300 mm. This unit is built into a common thermal unit and receives energy from the same systems as other cooking equipment.

In the lower part of the cabinet of the thermal block, there are fireboxes designed for burning liquid or solid fuels. For heating boilers and cooking, kerosene, diesel fuel or wood can be used. When using liquid fuel, combustion is performed using three nozzles of the type FK-01 (according to other data, KGF-3M). These devices spray fuel inside the furnace, after which it mixes with air and burns. The resulting smoke is removed from the machine through a pipeline mounted on the front wall of the van. Folding chimneys are provided on the roof of the van. In the transport position they are laid on the roof, in the working position they are raised to the vertical position.

Before cooking, the calculation of the kitchen should ignite the nozzles. According to the regulations, 10-15 minutes are allocated for this procedure. After that, the calculation can begin to perform other operations. During operation, the nozzles consume liquid fuel from a separate tank, and the flow rate depends on the type of fuel. Thus, each of the injectors consumes diesel fuel at a rate of about 3,5-4 kg per hour. When using firewood, each firebox can consume up to 7-8 kg of fuel per hour. The type of fuel also determines the cooking time. In particular, when using liquid fuel to boil 150 l of water in the water heater goes about 50-55 minutes against 80-100 minutes in the case of firewood.

Fuel for the thermal block of the kitchen is transported in separate tanks with a capacity of 54 or 72 l, depending on the modification of the kitchen. The fuel supply to the injectors is carried out by the displacement system. Compressed air for fuel supply is taken from the onboard systems of the base chassis or is forced by the pump, which is part of the kitchen equipment. All tanks are mounted on the outer surface of the front wall of the KUNG and closed with a light metal casing. 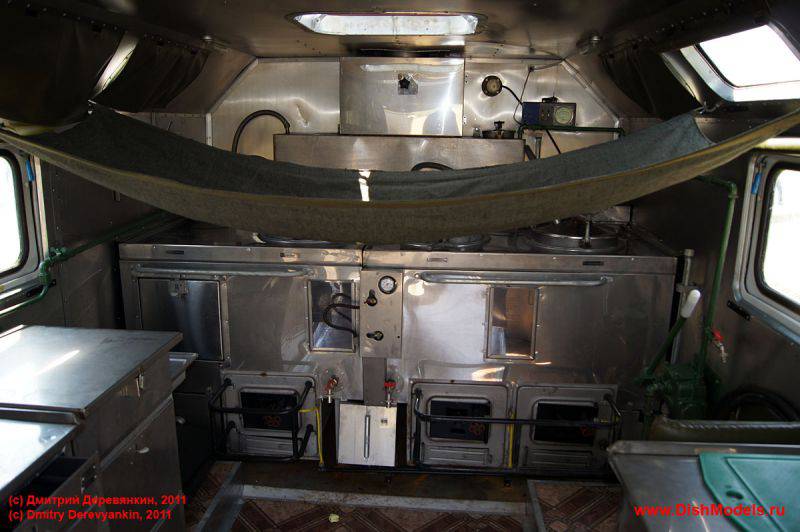 Thermal kitchen unit PAK-200. At the top you can see the lids of the boilers, below - the firebox. Photo Dishmodels.ru

Also in the kitchen equipment has a tank for transportation of drinking water used in cooking. Its capacity is at least 350 l.

In the back of the van is auxiliary equipment for cooking, as well as cabinets for storing various equipment. At the starboard, next to the aft door, there is a closet for storing workwear. In front of it and at the left side there are racks of a small height, also performing the functions of tables for food processing.

In the cabinets and shelves there is a place for transportation of ready-made bread (kitchen PAK-200 does not have the ability to bake it independently), other food products, various seasonings, equipment, etc. In addition, the kitchen is equipped with a separate bathroom for washing products before cooking. Water for washing comes from the water heater and is drained through the nozzle outside the van.

Despite the relatively small size of the cabinets, quite a large amount of food is transported in the PAK-200 kitchen van. The kitchen is able to transport provisions at the rate of one day per 200 person. Thus, arriving at the place of work (or on the march), the calculation of the kitchen with the help of a portable stock of products can provide 200 people with burning food three times. For further work requires additional supply of products. 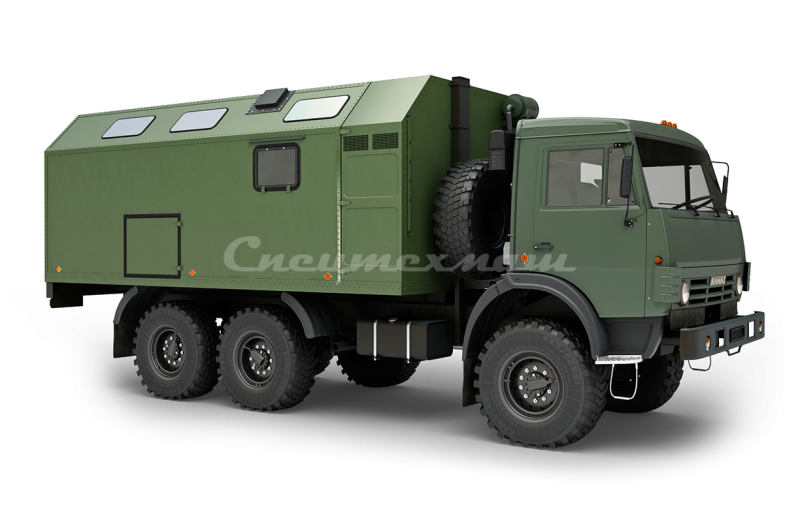 The van-KUNG used as the basis for mobile automotive kitchens should have a set of doors and hatches. So, in the back sheet is provided a door for access inside. In the roof there is a ventilation hatch, and in the left side there is a hatch for servicing the equipment. Delivery of prepared food is carried out through the hatch in the right board, located between the thermal block and the right cabinet-table. Depending on the modification, the location of the hatches may vary.

Despite the large number of special equipment, the calculation of the kitchen PAK-200 consists of only two people, not counting the driver. All kitchen maintenance and cooking operations are carried out by calculation forces. Depending on the task, the calculation may be engaged in cooking in the parking lot or on the march.

Mobile kitchens of the PAK-200 family have been in service since the end of the seventies. Over the past decades, the industry has created several modifications of such equipment, differing from each other in the base chassis, the composition of the special equipment and other features.

Currently, new versions of the kitchen PAK-200 are produced by the St. Petersburg Spetstekhmash Research and Production Complex. It was this company that presented its kitchen version at the recent Interpolitex-2015 exhibition. In the version of “Spetstekhmash”, the PAK-200М kitchen is based on the KAMAZ-5350 chassis, which provides it with quite high mobility and maneuverability characteristics. The curb weight of the kitchen in this modification does not exceed 13,5 t, the total - up to 16 t. 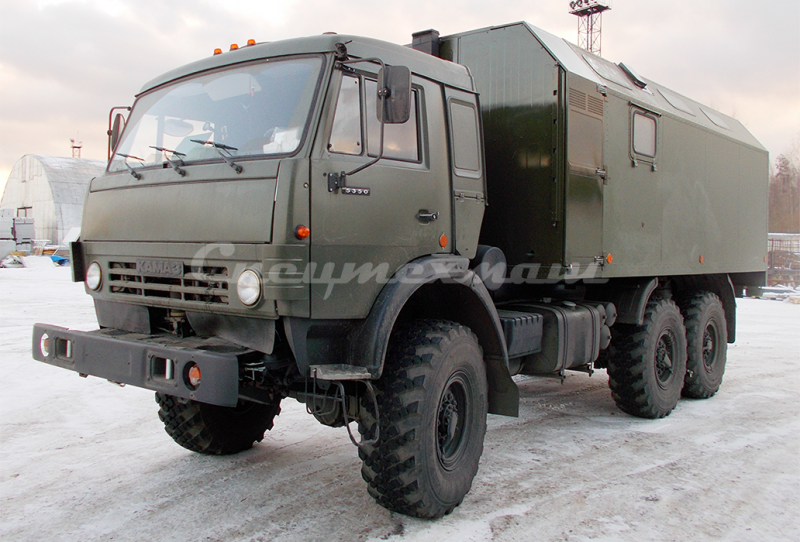 In the course of modernization, the new version of the PAK-200M received a set of special equipment to facilitate the work of the calculation. For example, in addition to the filtering installation, the machine is equipped with air conditioning and heating. The basic parameters of some of the main units have been changed. Thus, the capacity of the water tank is brought to the 450 l, and the heating equipment is divided into three blocks. The first one includes an oil-jacketed boiler and frying deck with a capacity of 130 l, the second one has an 150-liter boiler and an oven, and the third one is equipped with an 80-liter food kettle.

In addition to two tables and two storage cabinets, a two-compartment household refrigerator is introduced into the equipment, in which it is proposed to transport perishable products. Also, the work of the calculation is facilitated by a vegetable cutter and a meat grinder with a universal drive. Such a "food processor" is intended to speed up the process of cooking. In addition, the engineers "Spetstehmash" changed the layout of the internal units of the van. So, the heating equipment is now divided into two parts, and one of its units has been moved to the starboard.

All changes that are present in the modernized versions of the kitchen PAK-200, facilitate the work of the calculation and simplify the process of cooking. In this case, the main characteristics of the updated kitchens remain at the level of basic samples. All complexes of the PAK-200 family allow you to provide hot food and boiling water to 200 people for one day (using a portable stock of products). If necessary, mobile automotive kitchens can work together with other cooking complexes, such as mobile bakeries.

Despite the development of armaments and military equipment, the soldiers still need a timely and full supply of food. Automobile kitchens PAK-200 of all versions successfully cope with the tasks and remain relevant to the troops. Therefore, despite their considerable age, they remain in different units and, apparently, will carry out their tasks in the future.