The National Interest: 5 kinds of Russian super-weapons of the new generation

November 11 2015
19
High marks are always pleasant, especially when it comes to ratings from the main competitor. While domestic specialists are trying to follow the achievements of other countries, foreign experts pay special attention to Russian developments. In addition, they often give them the highest marks, recognizing that Russia not only has a high potential in creating weapons and military equipment, but also actively implements it.


November 8 The National Interest published the American edition of an article by Dave Majumdar with the telling headline The Russian Military's 5 Next Generation Super Weapons (“5 kinds of Russian super weapons of the new generation”). As the name implies, the subject of the article was the latest Russian developments in the field of armaments and equipment. In recent years, the Russian defense industry has been engaged in a large number of projects of various equipment and systems. A large part of these projects attracts the attention of domestic and foreign experts, as well as the public. D. Majumdar decided to make a kind of a list of the latest Russian developments.

At the beginning of the article, the author recalls that, despite the collapse of the Soviet Union, Russia continues to develop the defense industry and create new weapons and equipment projects. The fact that the Russian military-industrial complex is only a shadow of the Soviet one does not prevent Moscow from implementing its plans. 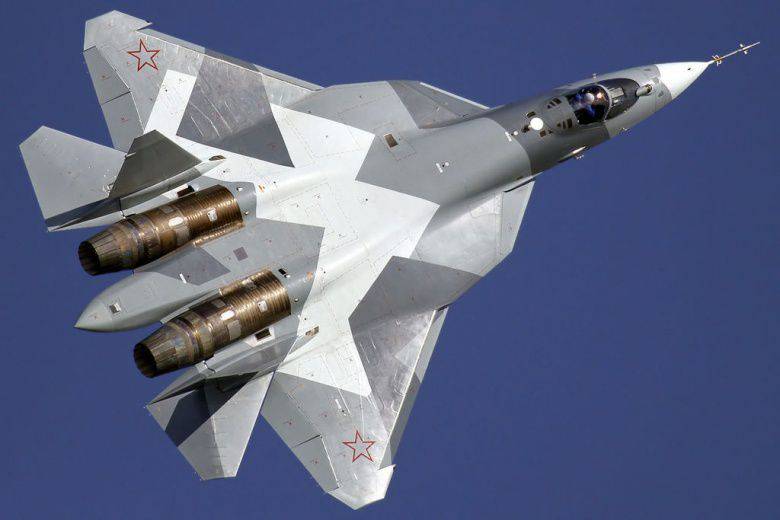 Over the past few years, the Russian industry has begun work on a number of new projects whose aim is to upgrade the fleet of equipment and other materiel of the armed forces. Recent events, such as economic sanctions or falling oil prices, hit the Russian economy, but work on new projects continues.

D. Majumdar notes that different branches of the defense industry experienced differently the collapse of the Soviet Union. At the same time, Russia retained advantages in some areas. Russian enterprises, as in the past, build excellent armored vehicles, airplanes, submarines, as well as produce modern electronic warfare systems. Given this, according to the author, NATO experts need to monitor Russia and look to the future.

Probably the most prominent modern Russian military equipment project is the Perspective aviation Frontline Aviation Complex ”. The author recalls that the goal of this project is to create a new fifth generation fugitive fighter, which will replace the Su-27 family aircraft in the future.

After completion of all the necessary work and the start of serial production, the PAK FA aircraft, with a number of reservations, can be considered an analogue of the American Lockheed Martin F-22 Raptor fighter. Both aircraft should have some similarities, such as the possibility of a supersonic cruise flight or greater flexibility in the application to solve certain problems. The author also notes that the new Russian aircraft should receive modern means of detection and electronic warfare systems.

Nevertheless, reminds D. Majumdar, the PAK FA project is distinguished by its high cost, which is why the Russian military department is forced to correct plans for the purchase of such equipment. So, relatively recently plans were published according to which in the near future only 12 of such aircraft will be acquired. In addition, the timing of the development of engines designed specifically for new aircraft may affect production rates. It cannot be ruled out that Russia will not increase the production of the newest fighter aircraft until the work on the engine is completed.

In parallel with the promising fighter of a new generation, Russia is creating a stealth bomber, which is still referred to as “Promising aviation complex of long-range aviation”. The creation of this project is entrusted to the designers of the company "Tupolev". This organization has developed a large number of bombers of various types and has solid experience in this business.

The author recalls that at the moment almost nothing is known about the PAK DA project. However, some of the data about him has already become public. Some publicized information suggests that the Russian Air Force in the future may receive a bomber, built according to the scheme of "flying wing" using stealth technology. D. Majumdar stresses that this is a departure from the ideas used in earlier projects. Thus, the existing strategic bomber Tu-160 is capable of accelerating more than M = 2, but the future PAK DA will be subsonic.

According to reports, Russia intends to slightly postpone the implementation of the PAK DA project in favor of building modernized Tu-160. Because of this, the estimated time of the first flight of the prospective bomber is shifted to 2023. This may indicate a desire to change the strategy for the development of long-range aviation, but a new bomber may be needed earlier than is currently thought.

For arming the ground forces, Russia creates a whole family of armored vehicles for various purposes called Armata. Instead of specialized combat vehicles that can only solve predetermined tasks, a common universal chassis is created. The latter can be adapted and refined for a particular role and become the basis for specialized equipment.

Within the framework of the Armata project, several types of military equipment are being created at once. This is the main tank, infantry fighting vehicle, self-propelled artillery and other equipment. Machines of the new project have a number of features that were absent in previous Soviet / Russian developments in this area. Apply advanced booking technology and the latest electronics. In particular, the main tank T-14 on the basis of a universal platform is equipped with an uninhabited fighting compartment and a complex of active protection.

The story about the Armata project D. Majumdar concludes with a question that refers the reader to the introduction of the article. In his opinion, the question is whether Russia can afford the production of such a perfect technology?

Electronic warfare systems (EW), according to the author, are an interesting example of differences in the achievements of industry in different countries. Thus, in a variety of technologies, Russia is still lagging behind the West, but in the field of EW it is not inferior or even surpasses its main competitors.

The Pentagon has already paid attention to how diligently Russia is developing its EW systems. Recent reports on this topic clearly say that the US military has lost its dominant position on the air. A good example of the achievements of Russian experts in the field of electronic warfare are the land complex "Krasukha-4" and the system "Khibiny", designed for installation on combat aircraft. Such equipment has high characteristics, although some publications tend to overestimate it.

Russia continues to develop its EW systems, enhancing their characteristics. Thus, in the future, Russian funds of this class will remain a threat to the armed forces of a potential enemy.

The author of The National Interest begins this section of the article with praise. According to him, Russia has always built excellent submarines. Nevertheless, he notes that the newest submarines of the Borey and Ash Trees projects, which are currently being built, represent the development of Soviet-era developments.

Russian experts are well aware that progress does not stand still, and take certain measures. The result of this is the development of new nuclear submarine projects that will replace the existing ones in the future. As a result of the implementation of new projects, it is planned to replace the submarines of the Oscar types (949A “Antey” project) and Sierra (945 “Barracuda” and 945A “Condor” projects).

D. Majumdar writes about the alleged roles of promising submarines. So, the submarines, which are to replace the boats of the 949A project, will follow the US carrier strike groups. Submarines designed to replace the Sierra-class ships, in turn, will accompany strategic missile cruisers and protect them from various threats.

It must be admitted that the new publication of The National Interest, devoted to Russian defense projects, turned out to be very balanced and objective. Its author reviewed the five programs underlying the renewal of the Russian armed forces, made some assumptions and conclusions, but did not preserve objectivity and did not increase the amount of purely propaganda materials, which are enough without it.

In fact, the only complaint that D. Majumdar makes to new projects concerns the reality of their completion in the existing economic environment. “Sanctions and low oil prices” have affected the state of the Russian economy and may have a negative impact on promising weapons and equipment projects. Thus, the author’s concern on this subject, with some reservations, can be considered appropriate.

Despite the existing problems, the author acknowledges that some promising projects of Russian weapons and equipment pose a serious threat to the enemy. For example, the Russian means of electronic warfare, even with dubious stories derived from a commonplace typo, are a serious cause for concern. This means that, as the author of the article put it, NATO experts need to monitor Russia and look to the future.