American War Tales: "How to Stop the Russians and Belarusians Preparing for the Invasion of the Baltic States"

November 11 2015
64
During the week, the US Congress intends to discuss the “military threat” scenario presented to the Committee on Military Affairs by retired colonel Douglas McGregor. The retired American colonel says that so far, they say, the world's attention is focused on the Syrian issue, as a special case of the crisis in the Middle East, then a new problem arises before the United States of America and their allies in the North Atlantic military alliance.


The question itself is somewhat surprising, if not to say shocking. It’s just somehow difficult to imagine that both chambers of the Russian parliament - the State Duma and the Federation Council - would have gathered in the broadest composition to discuss what a retired colonel was putting on a piece of paper. It is possible that the colonel would have quite sensibly and intelligibly explained, but only under no circumstances would Russian legislators be convinced by the same hypothetical retiree that his considerations must be heard without fail, and a conclusion should be immediately drawn from them. .

In general, this is practically impossible in our country, but in the US, as it turns out, it’s even ... It remains to find out what kind of MacGregor it is, and what kind of threat to the States and its allies suddenly saw on the world map this retired American military man.

By and large, Douglas Macgregor - a person in the military, and not only the military, the circles of the United States known. This is to some extent a media person who enjoys a certain popularity due to the fact that
a) is a living legend of the American army; at one time, being the commander of the American cavalry regiment (motorized infantry) during the 1 war in Iraq, defeated the Iraqi motorized brigade in less than half an hour (at least, the official statistics sound);
b) criticizes the Pentagon and the entire American administration, which, according to McGregor, are not ready to wage a modern war.

Douglas MacGregor is a very popular person (both with a plus sign and a minus sign) in the USA also because he often appears on the air of all kinds of media and presents his vision of reforming the American armed forces using the real theaters of one actor Often, MacGregor calls the idea of ​​increasing the US military budget a lobbyist.

A new idea of ​​a retired American colonel, which they decided to discuss in Congress, is that the new hotbed on the world map will be (attention!) Baltic. At the same time, Douglas McGregor assures that the war in the Baltic region is almost an objective reality, which is to be plunged tomorrow or the day after tomorrow.

The parade of the Stryker armored vehicles will not deceive anyone in Moscow. Russians do little well, but they have been very successfully destabilizing or conquering neighboring countries since the time of Peter the Great. And what is our answer? Small part with armored trucks.

It turns out that we (the Russians), as this MacGregor asserts, “do a little well,” and our credo is, you understand, “destabilization, annexation, occupation”. And, of course, bright American elves Colonels are literally eager to present their version of countering Russia, which is about to chop off half of the Baltic Sea along with the countries that are washed by this sea ... How are we going to chop off?

MacGregor, along with representatives of his own “analytical center”, presents to the attention of the US Congress Committee on Military Affairs a map on which the “Russian offensive operation plan” is marked with burgundy arrows. Everything is very, very serious ... 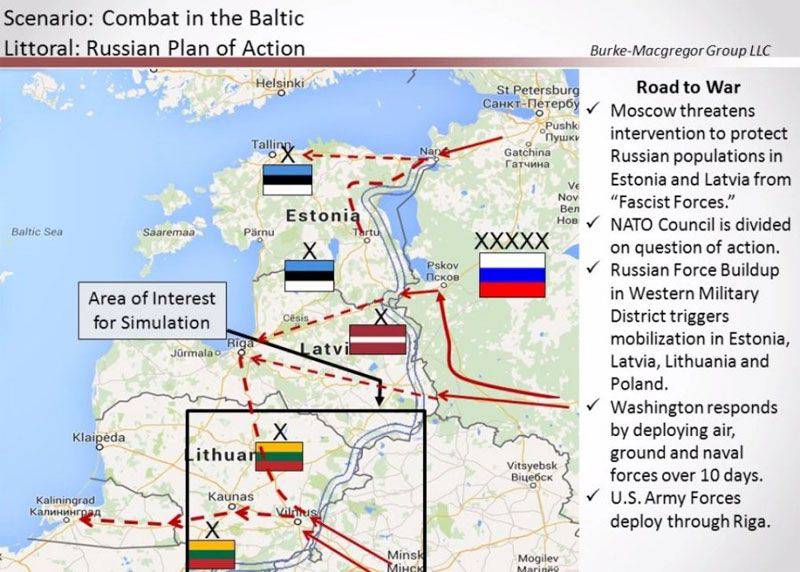 As can be seen from the map of the retired colonel, the “aggressive Russians” will attack from three directions and one “subdirect”. So, the “shock” groups will be sent to the Baltic from the St. Petersburg and Moscow directions, and from the south, the “aggressive Russian” will be assisted by no less “aggressive Belarusians” who will strike, naturally, from Minsk, for other cities of Belarus and places of military bases are retired an American colonel who, in half an hour due to a misunderstanding, defeated the Iraqis, as they say, does not bother.

On the McGregor map one can see how from the “St. Petersburg” direction through Narva a blow “will be inflicted” on the Estonian capital, as well as on the second largest city of the country - Tartu. From the "Moscow" direction, which at first is shown "double solid" "strike" in Riga, and "with approach", apparently, to the Pskov paratroopers (MacGregor claims that the Pskov "group" will call on Riga from the north). And in this “critical” moment for the Baltic states, the Belarusians are already pushing from the south ... The Belarusian armada literally passes through Vilnius on foot, one part, as already noted, invades Riga from the south, and the other turns to Kaunas. all in its path, is fixed in the Kaliningrad region. MacGregor, following Pentagon’s head Carter, is inclined to believe that it is in the Kaliningrad region that the Russians (now, as it turns out, together with the Belarusians) will create a “bridgehead” from which they will attempt to prevent all attempts of the Balts in distress ...

Naturally, if with such a card a retired colonel glances into Congress and with a military voice set to begin broadcasting about how Russian-Belarusian “aggressors” threaten allies in Eastern Europe, then it can be assumed that half of congressmen and congressmen have likely a nervous breakdown with cardiac consequences. And there is an even greater likelihood that the words about the threat will be passed on by the US parliamentarians, as they say, to the guests' minds, and they will again delay the US military budget above 0,7 trillion. dollars, of which the MacGregor “Analytical” group is obviously not without an order, and is seeking ...

So what does a retired colonel propose to “stop Russia in the Baltic States”? For a start, MacGregor says that with the number of American soldiers in Europe (and he assures that there are no more than 30 thousand), which is present today, the Baltic States are awaited by the inevitable "occupation of Russia" with the simultaneous defeat of the Estonian, Latvian and Lithuanian armies, even if covered by some American military contingent. According to McGregor, in order to counter Russia in the Baltic States, there must be reconnaissance and shock groups of high mobility consisting of at least 5,5 thousands of servicemen each. The groups will be equipped with multiple rocket launchers and mortars. From the air, the group will be supported by Apache helicopters and attack drones.

Retired Colonel suggests immediately abandoning exploitation in the Baltic countries tanks Abrams due to their low local effectiveness. Instead of these tanks in the Baltic, McGregor sees light European armored vehicles that will be less costly to use, and whose production line must certainly be brought to the United States (for safety, of course ...).

As a result, for the complete "peremoga" of the American army in Lithuania, you will have to use two reconnaissance-strike groups (11 thousands of servicemen). These two groups together with 6 thousand Lithuanian soldiers, according to the American colonel, will stop 23 thousands of "aggressive" whether Russians, or Belarusians. 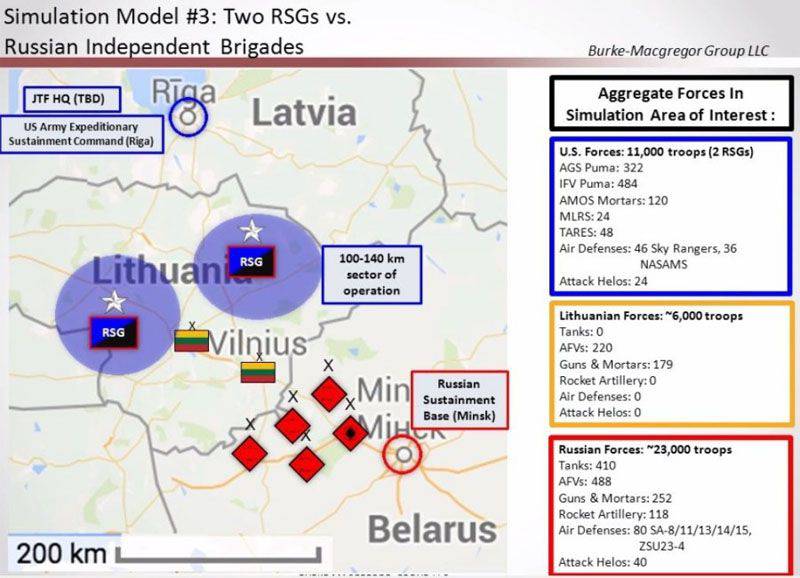 Another two or three similar reconnaissance drums of the high mobility group of the US Army will “save”, as McGregor understands, Latvia and Estonia. In this case, MacGregor notes that the issue will be resolved in a week or two.

In the USA, it was necessary to say that not all experts reacted with great enthusiasm to the statements about blitzkrieg in counteraction with Russia. One of the experts, General McMaster, said that the idea was certainly beautiful, but what would McGregor reconnaissance-strike groups do if the Russians took and did not surrender to the valiant US-Baltic army in two weeks? .. on MacGregor yet. As the “analyst” doesn’t have an answer to the question of what to do in the Baltic States, if Russia simply does not show up in absentia declared by the retired colonel because of more important cases ...

Ctrl Enter
Noticed oshЫbku Highlight text and press. Ctrl + Enter
We are
Situational analysis of the death of the MH17 flight (Malaysian Boeing 777), made on the basis of engineering analysis from 15.08.2014Results of the week. "God forbid to see Russian revolt, senseless and merciless!"
Military Reviewin Yandex News
Military Reviewin Google News
64 comments
Information
Dear reader, to leave comments on the publication, you must sign in.