November 10 2015
63
Before the start of the civil war, the Syrian army managed to establish the “Contact-1” dynamic protection (DZ) of only a fraction of its available tanks T-72. Over time, most of the DZ "killed" during the fighting, and it turned into a real deficit, writes Roman Katkov in an article for Messenger of Mordovia. 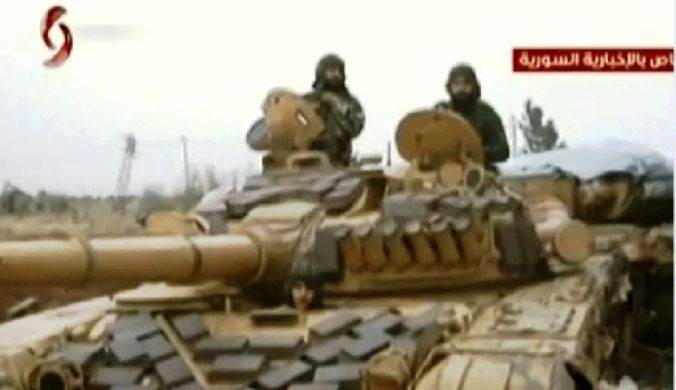 The lack of protection blocks Syrian craftsmen tried to compensate for homemade protivokumulyativnymi screens, or even just sandbags. Recently, however, apparently, the shortage of "Contact-1" began to be filled with new supplies.

“The Syrians seem to have started getting sets of dynamic protection. Already several times, looking at materials coming from combat areas, I have noticed tanks with handicraft superimposed elements of the DZ, ”said Yuri Lyamin, an expert on the Syrian theme.

He illustrated his words with a photo (screenshot from the video), in which the frontal part of the Syrian T-72А is covered with green DZ blocks. In this case, the tank itself has a sand color.

“True, it was mounted, apparently, in a great hurry and not in the way it should be. As a result, significant undisclosed areas remained, which may adversely affect the survivability of the vehicle in battle, ”the author concludes.