The Great Chessboard: How Russia Will Win the World Hybrid War

November 11 2015
86
The one who comes into conflict last is most likely to become a new world hegemon. This is not a giveaway, kids, but geopolitics. 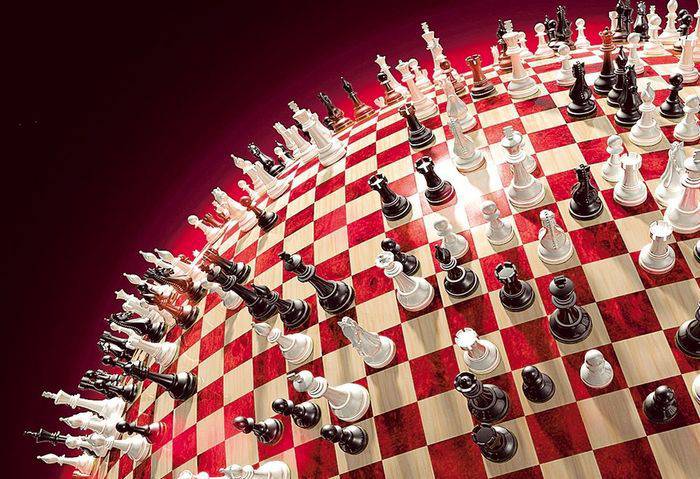 Let's call a spade a spade. There is the fourth world war unleashed by the United States in a hopeless attempt to keep the world hegemony escaping from them.

By its imperialistic nature, this war is no different from any other world war. All the same war for dominance, for spheres of influence, for control over the distribution of resources, for the preferred model of the world economy.

This war differs only in a set of tactical tools. In the First and Second World War, direct clashes between huge mass armies over hundreds of kilometers of solid fronts were preferred.

The hostilities of the Third World (Cold) were predominantly in secondary directions, in the countries of the “third world”, often with the help of a “proxy” (formally independent, but actively supported weapons, money and instructors of countries and groups). A direct collision between the USSR and the USA was impossible because of the presence of a large number of nuclear weapons on both sides, because then the HLG doctrine would work - guaranteed mutual destruction.

The main hostilities were conducted in the information space, often with the help of an inner fifth column, the so-called “dissidents”.

The dissidents were actively supported with money, spun, providing opportunities to publish and perform on television and radio, as well as defended them in every way, raising howls about “human rights” every time they were caught in outright sabotage.

At the same time, inside the United States, they confidently pursued a policy of McCarthyism, when any dissenters were declared “satanic commies”, actively subjected to harassment or physically destroyed.

The third world USSR lost, mainly due to the betrayal of the elites. As a result, all the countries of the former USSR and the Warsaw Pact were under external control for many years (some are still like the Baltic States, Ukraine and Poland), subjected to resource looting (sometimes natural resources, sometimes human, sometimes financial etc) and targeted de-industrialization.

The methods of the Fourth World War started by the USA are also limited by the presence of a large number of major players (USA, Russia, China, etc.) of large nuclear weapons. Therefore, it, like the third, is conducted indirectly, without direct clashes of the main participants.

Although the US fleet is already demonstrates the intention to enter the inland seas of China, and Beijing (and the PLA headquarters) consider this unacceptable and may respond. But even if it happens, then at the first stage it will be a conflict of low intensity.

And while the US-China relations are rapidly heating up, the war is already going on in three spaces: in the economic, in the information, and actually in the military.

a) sanctions against Russia that violate both international law and WTO rules;

b) attempts to block Russian gas supplies to the EU by organizing a coup d'état in Ukraine;

c) drawing the EU into an TTIP treaty;

a) attempts to make Russia an aggressor in the eyes of the international community;

b) attempts to destroy the consensus within Russia, to cause a fall in confidence in the government and, as a result, to organize a “Maidan” in Russia, followed by a change of power to the loyal to the United States and / or the split of Russia into a number of dependent entities;

c) “de-Sovietization” of the countries of the former USSR, the creation of Russophobic mythology about the “oppression” of these countries, as the basis of their state ideology (often the myth of oppression is the only basis for the statehood of a number of limitrofs);

d) constant pressure in the media and social networks “like living in Russia is bad”, eating the last hedgehogs, and having to eat caviar without bread (attempts to really compare with numbers and facts are resolutely rejected);

e) a campaign to form a perception of China as tyranny (spinning the Falun Dafa sect, supporting Tibetan separatist lamas, stories about the "hundreds of millions who were shot by Mao Zedong" etc);

f) the image of Venezuela, Cuba, Iran, Syria, Belarus and a number of other countries as “authoritarian dictatorships”, attempts of “color revolutions” in these countries.

War space. The number of open military conflicts has been growing rapidly lately:

b) Ukraine as a whole;

c) Syria (IS and "moderate opposition");

The Israeli-Palestinian tensions have also escalated, unrest in Afghanistan, sluggish conflicts in the CARs and several other African states. And practically everywhere, the US or its closest satellite allies are visibly or invisibly present.

Actually, the head of the Pentagon, without further ado, He accused Russia and China "in an attempt to change the existing world order." But the old order, when the United States robbed these (and other) countries with impunity, does not suit anyone either. Therefore, further confrontation is inevitable.

And only the liberals and the guard patriots (the last for many suddenly) yell "no need to enter into conflict with the United States," that is, "Katz offers to surrender." Just think, trade off the extinction of a few tens of millions of Russians to the possibility of a “creacle” for a few more years to choke with moldy cheese. However, according to the set of their public statements, it has long been clear that they do not care about these tens of millions of lives.

The position of "guard patriots" deserves special attention. They shouted for many years, “Russia must free itself from Western occupation,” and when such a confrontation actually arose, they sharply screamed “it disappeared.” Attention, the question is: how is liberation from Western influence possible without confrontation? And how consistent is their position in that they are ready to plunge Russia into a civil war for the sake of their idealized ideas (the essence is not important, monarchical and nationalist), but at the same time they ache because of one self-killed soldier? Moreover, they spread rumors about non-existent losses, resembling Madame Vasilyeva, who even once buried a football team.

In my opinion, the positions of the “guard patriots” are hypocritical and deceitful in each of the points, and their real interests are not in the reforms in Russia, but in the service of Western masters. Or to those who want to be a Western occupation administration in the Russian Federation, which is even more disgusting (and some of them have already served in the previous one, under Yeltsin).

As I said, there is a world war. And the alarmists in the times of all previous wars “led to the wall”. If Goebbels had the Internet, thousands of “daughters of GULAG prisoners” would sit there and write, for example, in December 1941 “Stalin is constantly retreating, the Germans are already near Moscow, you need to urgently change the government to patriots”. Fortunately, Dr. Goebbels did not have internet access, and our grandfathers then won.

No need to harbor illusions and live by the laws and demands of peacetime. There is a war, and during a war it is sometimes necessary to be patient and to strain yourself. Not a single country that the Americans "democratized" did not become a better life - neither Iraq, nor Afghanistan, nor Libya, nor Ukraine. On the contrary, they all lost the opportunity in the coming years to find a relatively peaceful life, and hope for development in the foreseeable future.

In fact, the actions of the Russian leadership are fairly simple and clear - Moscow is trying:

a) move the main fighting as far as possible from its borders;

b) minimize the intensity of battles with the participation of Russians (Slavs) in order to minimize their losses;

c) trying to pull off time, delaying confrontation with the United States, waiting for Washington to endure and start aggression against its main rival, China.

Today, the alignment is approximately as follows: there are two main conflict zones (Ukraine and the Middle East), with the potential for another conflict, but for strategic control over the South China Sea.

The conflict in Ukraine at the lower level looks like a civil war "between Russophiles and Russophobes", "Bandera-Vlasovists against the Soviet", and at a higher level - like a clash of American proxies who staged a coup and seized Kiev, with pro-Russian proxies holding Donbass.

Today it is actually frozen, and any attempt by the American puppets to unfreeze it is met with a negative perception from Europe, which is already lacking in problems.

The muted conflict of low intensity, over which hotheads are dissatisfied, is much better in terms of saving lives than Total War, which Ukrainian nationalists who have survived until now, dream of. The longer the conflict is frozen, the more obvious is the collapse of Kiev’s European illusions and the weaker the power of the impotent junta.

It is only in Kiev that some Ukrainian-centered illusions are built, thinking that the whole world revolves around the Ruins, and for the Americans they are just a bargaining map. Like Pinochet, Hussein, Mubarak or any other pocket dictator before them. At the moment when the costs of maintaining the Poroshenko-Yatsenyuk regime exceed their usefulness, they will be instantly “merged”. In strict accordance with the principles of mercantilism, formulated by Sir Francis Bacon.

The conflict in the Middle East is much more complicated, including in view of several hotbeds of confrontation and a large number of parties.

The first point is Syria, where Russian aviation helps government forces resist US proxies (someone still doubts that IS and the “moderate opposition” are US proxies, after all the help Washington has provided and continues to provide?). There are also Iranian proxies helping Assad. Now there the situation is slowly but surely breaking over to the side of a legitimate government.

The second point is Yemen and Saudi Arabia. The Saudi mercenary army, invading Yemen, fights very badly and, with more or less intense battles, rushes to flight. As a result, Yemeni Hussites not only successfully defended, but already captured one of the cities in Saudi Arabia itself and practically controlled one of the CA provinces. In addition, the Saudis suddenly started having problems with finances, and they are now actively recruiting debts.

The third potential conflict point is the Kurds against Turkey. Erdogan’s Islamist and nationalist policies have already led to a break in the truce between Kurdish militant groups (Peshmerga and others) and the Turkish government. And if the Kurds succeed in repelling the IG offensive (and everything is moving towards this), then in the future they can turn their weapons against Istambul, with the result that Turkey will get a civil war.

The fourth conflict point is Israel against Iran. Iran does not fight directly with Israel, but uses its proxies (HAMAZ and Hezbollah) to constantly “alarm” the Israeli army and other security forces.

In fact, the United States is losing, significantly weakening or turning against itself the majority of its “allies” in the region - Saudi Arabia, Turkey and Israel.

However, this tangle of belligerent contradictions in the Middle East may become secondary if the United States and China enter into direct armed confrontation for control over the South China Sea. So now we need to follow this direction as closely as possible, which can fire at any moment.

China is waiting for whether the United States and Russia will clash first. Russia is waiting for the United States and China to clash. The one who is the last to come into conflict has the greatest chances of becoming a new world hegemon - such is (and not a sword with his head) the nature of the race for world hegemony. This is not a giveaway, kids, but geopolitics.