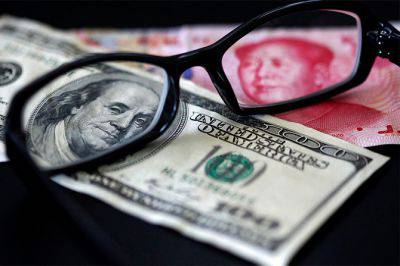 Why is China year after year trying to get the status of a key currency for the yuan? The most obvious answer is that the inclusion of the yuan in the basket of special drawing rights will confirm at the international level the commitment of the PRC leadership to the ideas of forming a market economy. In addition, Beijing hopes to bring its currency to the level of the dollar and the euro: according to SWIFT estimates, the yuan has already become the fourth in the list of monetary units widely used in international settlements.

The author recalls that representatives of the International Monetary Fund (IMF) made it clear to China that in the near future, the yuan could join the basket of reserve currencies, known as Special Drawing Rights (SDR). This information came to Bloomberg directly from Chinese officials.

Offering to understand the question of why the yuan "fall" in the SDR basket, the analyst recalls history create special drawing rights.

The IMF created the SDR in 1969 year to increase global liquidity. These “rights” are not technically a currency, but they give IMF member countries that have SDRs the right to receive any currency from the basket (currently it is dollar, euro, yen and pound sterling).

The question of including the yuan in the basket is of “decisive importance” for the PRC, since the SDR can then be converted into Chinese currency “on demand”.

In a speech delivered in 2009, Zhou Xiaochuan, Governor of the People’s Bank of China, said that the global financial crisis highlighted the risks of a global monetary system that relies on national key currencies. Without uttering the name of the yuan, Comrade Zhou said that the SDR should assume the role of “super-sovereign reserve currency”, and the basket should be expanded, and all major economies should be included in it.

Over the years, Chinese officials have begun to speak out more openly, said Andrew Mayeda.

After a recent meeting with President Barack Obama at the White House, President Xi Jinping thanked Washington for supporting the idea of ​​including the yuan in the SDR basket. The approval of the IMF would allow reformers in the Chinese government to declare that China’s economy is heading towards the market.

Analysts believe that the IMF will approve the inclusion of the yuan in the basket of special drawing rights. After all, the global use of the yuan has increased: this currency was the fourth among those most frequently used in global payments (in August 2015, the share of the yuan was 2,79%; according to SWIFT, the yuan managed to outrun the yen).

Defining the “free use” of a particular currency, the IMF operates with several indicators that are guidelines for inclusion in the SDR basket.

The staff of the IMF indicated earlier that the yuan is still inferior to its global competitors in a number of indicators: the share of use in official reserves, debt obligations and currency exchange transactions. Nevertheless, experts say, 24 executive directors of the fund will make a final decision based on their own judgments. Many large countries, including the US, Germany and the UK, are already saying that they are ready to support the inclusion of the yuan in the basket, if only the Chinese currency meets the criteria of the IMF.

Supporting the yuan can strengthen the relationship between China and the UK. The latter seeks to transform London into the main center of calculations in renminbi.

The inclusion of the yuan in the SDR basket can also help the IMF increase its credibility with the Chinese. China and other emerging markets were supposed to get increased representation in the fund (the corresponding reforms were already mentioned in the 2010 year, when their plan was agreed), but the US Congress did not ratify the transformation.

What can happen to RMB assets in the long run?

The volume of placement by foreign companies of securities denominated in Chinese yuan and known as panda bonds may exceed $ 50 billion over the next five years (World Bank forecast).

Thus, let us add, turning the yuan into a part of the SDR basket would be a truly strategic step towards the global expansion of China. Economic expansion would be complemented by financial strategy.

The other day, the promotion of the yuan to the SDR basket was confirmed by Reuters.

The International Monetary Fund is ready to include the yuan in the basket of reserve currencies, reports from Washington TASS with reference to Reuters.

The report of the IMF experts, containing recommendations for the board of directors of the organization, "provides a positive opinion on the inclusion of the yuan in the basket."

“On the technical side, everything is going according to plan, there are also no obvious political obstacles,” writes TASS. “The expert opinion cited in the report tends to include the renminbi (the official name of the yuan) in the basket, but the decision remains with the board of directors.”

There is, however, one obstacle. American

TASS notes that the United States, which has a blocking vote in the IMF, is skeptical about the yuan initiative.

In addition, even if the report is supported in November by the board of directors, the yuan will go to the basket only in October 2016 of the year, since the organization has already extended (in August) the current basket for nine months: from December 31 to 2015 of September to September 30 of 2016.