On some results and features of the exercise “Union Shield-2015” 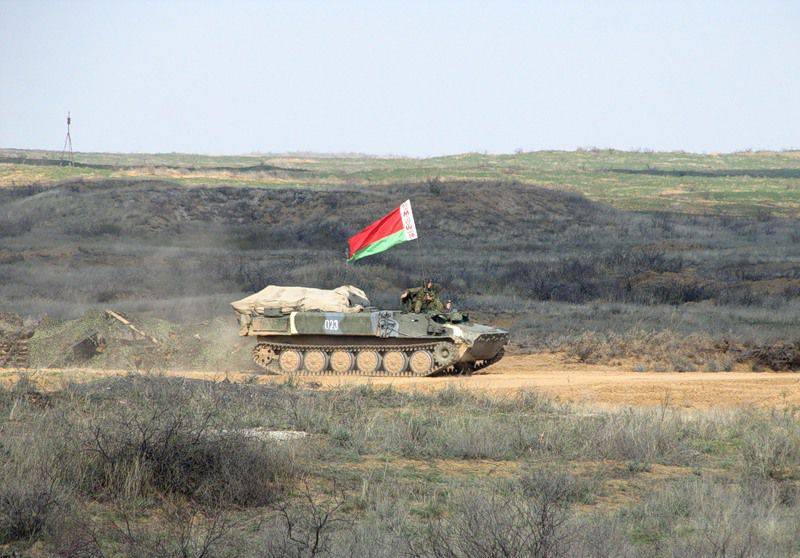 More than a month has passed since the end of the joint operational exercise of the Armed Forces of the Republic of Belarus and the Russian Federation “Union-2015 Shield” (JMA). After analyzing the interviews of officials, messages in the media, it is possible to draw certain conclusions about this event, which, by the way, have not been officially announced anywhere.

Thus, the maneuvers that took place from 10 to 16 in September under the leadership of the Chief of the General Staff of the Armed Forces - First Deputy Minister of Defense of the Republic of Belarus and commander of the Western Military District of the Armed Forces of the Russian Federation became the most important event for the preparation of a regional grouping of troops (forces) this year.

The main objectives of this exercise were to improve the interoperability of headquarters at various levels, to test the interfacing of advanced troop control systems and weaponsand also the practice of commanders in the management of troops (forces) in the course of conducting highly maneuverable military actions on a broad front.

At the maneuvers, the readiness of the formations, units and subunits was confirmed to defend the national interests of both Belarus and Russia, and of the Union State as a whole. Including, which is important, from the standpoint of the reciprocal use of military force. All practical actions were worked out at the sites located on the territory of the Russian Federation.

It is worth noting that the last doctrine turned out to be less ambitious (but no less significant!) Than the “Union Shield-2011”, which at one time caused a disturbance storm in the NATO countries (and frankly, hysteria). This year, only eight thousand people were involved and about 400 units of military equipment against more than 12 thousand people and 450 units of military equipment in 2011 year.

A characteristic feature of the past SOU was the fact that at the Russian test sites, Belarusian specialists not only worked through the tasks according to the management’s plan, but also tested new equipment and weapons that were developed as part of development work at domestic events. In addition, for the first time, new technical solutions were being tested for the first time, which are just beginning to be introduced to modern weapons.

Thus, the Belarusians have implemented a solution to improve the mobility and survivability of the management system - a completely new element was deployed at the communications center - a communications services center. It is a mobile complex hardware communications of a new generation with high bandwidth and classification of information exchange with guaranteed durability, interconnected by fiber-optic lines. Thanks to the new structure of the communications center, the time for its deployment has been reduced, which directly affects the deadlines for the tasks assigned to subordinate units.

It should be emphasized that in the course of the “Union-2015 Shield” exercise, satellite communication stations were widely used, which operated using the spacecraft resource of Russia. At the request of Belarusian colleagues, Russian developers have significantly changed the design of terminal devices, modules of such stations. This made it possible via satellite to access the communication center in Belarus and to ensure access to the space of the national fixed communication system - to connect with any subscriber in the country.

Also, the automatic telephone station ZAS has proven itself from the best side, and thanks to new domestic developments it is capable of interfacing with the network of the secret connection of the Republic of Belarus from anywhere in the Russian Federation. The capabilities of this type of communication were highly appreciated by the leadership of the Ministry of Defense - for the next year, the purchase of such a service was approved in the interests of the MTR command, as well as artillery brigades.

“Union Shield-2015” can rightly be considered unique, since along with the standard actions of the motorized rifle subunits in the conditions of conducting highly mobile defense, issues that had not previously been submitted to such exercises were worked out. This is a reflection of a series of "network attacks" on the channels of communication of the regional grouping of troops in order to distort and replace the transmitted information.

It is not difficult to notice that the leadership of the Belarusian military department not only carried out the planning of this combat training activity, but also took into account all the features of modern challenges and threats. In particular, based on the analysis of recent conflicts, it becomes obvious that one of the most important functions in various conflicts is performed by unmanned aerial vehicles. And as practice has shown, the use of UAVs is the most optimal and safe way to obtain intelligence information.

Taking this into account, the Belarusian military personnel, in conditions as close as possible to combat, were able to work out a wide range of tasks for the use of domestic unmanned aviation complexes (LHC), as well as in practice to work out the option of pairing them with command posts of artillery units.

During the exercise, BAK “Bercut-2” proved itself well, it carried out reconnaissance of the area, issued target designations to fire weapons of destruction, and then fixed the fact of destruction of these objects. Taking into account the fact that all of these objects were amazed, we can state with confidence the fact that in the Armed Forces of Belarus it was possible to organize at a qualitative level the interaction of reconnaissance, target designation and destruction.

In the course of accomplishing the tasks, the JMA also paid considerable attention to maintaining a high level of moral and psychological component of the personnel.

To date, no significant teaching has created such a significant grouping of forces and means of ideological work. It consisted of a mobile radio and television center (PRTC), two mobile information centers (PICs), as well as correspondent groups of the VoenTV television company and the Vayar military information agency.

In order to raise morale, organizing the rest of the servicemen, artists of the Academic Ensemble of Song and Dance, a group of the Indicative Orchestra of the Armed Forces of the Republic of Belarus performed at the test sites.

A special function at the Kirillovsky site was assigned to the calculation of the PRTC, which was preparing to broadcast and release news from Belarus, as well as videos of correspondent groups. The mobile information centers organized daily supplies of the servicemen to the periodical press, which is remarkable, even ahead of the publication of printed publications in the Homeland, which allowed the Belarusian contingent to remain in the information field of the country.

It should be emphasized that an equipped press center with wireless Internet access was deployed for media representatives accredited to the SDA. In addition, as part of the cultural and leisure program, visits to museums and exhibitions of the northern Russian capital were organized, historical sights of Vyborg, Mannerheim line.

It was also important that the Russian colleagues noted that the quality and level of catering, bathing and laundry services, rest and heating of Belarusian personnel was at a very high level, and in a number of indicators was better than the Russians.

And yet, the main result of the “Union-2015 Shield” exercise is that under difficult conditions in the world and in the region, the strength of relations between the Republic of Belarus and the Russian Federation, a common opinion regarding the emerging threats and ways to combat them, as well as decisiveness were demonstrated. upholding national interests in ensuring the military security of the Union State.

Ctrl Enter
Noticed oshЫbku Highlight text and press. Ctrl + Enter
We are
Who orients the army and navy in spaceBetween the sea and the land. US Marine Corps strategy on the verge of change
7 comments
Information
Dear reader, to leave comments on the publication, you must to register.