November 10 2015
11
On November 8, the United Arab Emirates opened the international aerospace exhibition Dubai Airshow 2015. This event is a platform for advertising new developments in the field aviation, space, air defense, etc. For more than two decades of its existence, the exhibition in Dubai has become one of the largest and most important events in the aerospace industry.


According to the organizers, this year more than 800 companies and organizations from fifty countries of the world take part in the exhibition. At the same time, the defense industry of the UAE itself is best represented - at the Dubai Airshow 2015 booths, 234 expositions of the host country companies are located. The second place in terms of the number of participants was left to the United States - 185 companies. Three leaders closes the UK, which is represented by 67 organizations. Representatives of several dozen countries will be able to get acquainted with the new developments of the participating organizations. It is reported that the organizers of the exhibition sent invitations to the military departments of 103 states.

One of the main participants of the Dubai Airshow 2015 is Russia. The organization of the Russian exposition was entrusted to Rostec Corporation. All Russian developments in several areas are presented in the framework of a single exposition, located on the area of ​​678 square. The Russian defense industry is represented at the 23 exhibition by organizations working in various fields. Two hundred Russian-made exhibits are located on the stands and open area. 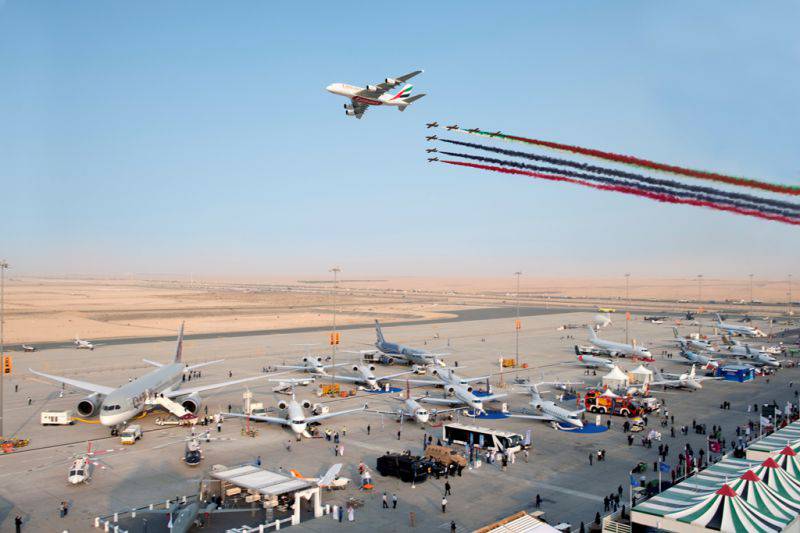 A few days before the exhibition, the Russian Helicopters holding announced the composition of its exposition. Potential customers are several modern helicopters for various purposes. These are the multipurpose Mi-171А2, the lightweight multipurpose “Ansat” in the VIP version, as well as the fire-prevention modification of the Ka-32А11ВС. This technique is designed to address various issues that may face potential customers. Russian experts expect that new domestic developments in the field of helicopter will interest foreign customers. This, in particular, should contribute to the existing experience of practical operation of new technology. In particular, the Ka-32А11ВС helicopter in a fire-fighting configuration has already been used to fight a fire in buildings at high altitude.

The United Aircraft Building Corporation (UAC) brought a large amount of advertising materials and layouts of new domestic equipment to the Dubai Airshow 2015 exhibition. In the form of models presented the latest combat aircraft, such as the Su-35S, Yak-130 and even promising T-50 (PAK FA). Despite the lack of full samples, this technique has already attracted the attention of foreign countries. The general director of the state corporation Rostec announced that Russia is currently in talks with the United Arab Emirates, the subject of which is the sale of Su-35С fighters.

KLA represents not only military equipment, but also civil aircraft. Visitors to the Dubai Airshow 2015 again had the opportunity to get acquainted with the materials on the project of a promising passenger aircraft MC-21. For obvious reasons, this project has so far presented only a layout and printed materials. Nevertheless, the Russian exposition also includes a full-fledged sample of aviation equipment. A serial SSJ100 liner, built for the Mexican airline Interjet, flew in to attend the exhibition in Dubai. The board presented at the exhibition received a salon from the Italian company Pinifarina and soon should join another vehicle of its type, which is already involved in passenger transportation.

UAC representatives say that the SSJ100 aircraft can be upgraded to improve the basic characteristics. Thus, the liner in the business class cabin version can get additional fuel tanks, new wing tips and a number of other units. Through the use of such equipment, the flight range can be increased to 8 thousand. Km.

The United Rocket and Space Corporation and Roscosmos this time presented a joint exhibition. First time in stories these organizations demonstrate their developments on a common stand and under one brand. At the Russian "space" stands, products of several enterprises of the industry are presented. This is the "Information Satellite Systems. Reshetneva, NPK Space Monitoring Systems, Information Control and Electromechanical Complexes, NPK Precision Instrument Engineering Systems and others.

According to the domestic press, the organizations of the industry presented a number of models of modern spacecraft. For example, "Information Satellite Systems" represents the devices "Express-AM5", "Luch-5A", "Gonets-M" and others. VNIIEM Corporation demonstrates the layout of the Kanopus-V satellite, as well as images taken by this type of apparatus.

The Russian Concern Air Defense "Almaz-Antey" is a traditional participant in various aerospace exhibitions, which demonstrate their developments. Before the exhibition, the Concern's press service reported that about two dozen samples of various systems would be on display. The main element of the exhibition is the Triumph C-400 anti-aircraft missile system. In view of the novelty and high performance, this system attracts the attention of specialists and technology enthusiasts from around the world.

In addition, other air defense systems and electronic systems are demonstrated. So, the anti-aircraft complexes of the Tor family and the Buk-M2E system are presented. Detection tools are represented by 55ХХNNXXМE radar complex, as well as 6Л1Е and 122Л1Е radar. In addition, the exhibition includes materials on the three-coordinate radar of medium and high altitudes 121Ж55UME.

The Russian defense industry expects growth in demand for its products. Advisor to the Director General of Rosoboronexport, Mikhail Zavaliy, quoted by the TASS news agency, asserts that in the Middle East there is now a surge in interest in Russian weapons and military equipment. The countries of the region are aware of its real characteristics, and not only from promotional materials. In this regard, the military departments of the Middle Eastern countries are turning to Russia with proposals for the purchase of various defense products. In this case, the main interest is manifested in air defense systems, combat aircraft and ground technology.

Over the past years, the main buyer of Russian weapons and equipment in the Middle East is Iraq. Back in 2012, several contracts were signed for the supply of various equipment with a total value of about 4,2 billion US dollars. In addition, after the activation of terrorist groups, official Baghdad was forced to ask for additional supplies of weapons and equipment. It is likely that military-technical cooperation between Russia and Iraq will continue in the future.

Not so long ago, it became known that Saudi Arabia is showing interest in the Russian infantry fighting vehicles BMP-3 and the Iskander operational tactical missile systems. It cannot be ruled out that this interest will lead to an agreement on the supply of such equipment. The United Arab Emirates, which already have a large fleet of BMP-3, are currently considering the possibility of purchasing Russian-made combat modules, which are planned to be installed on new armored vehicles.

Dubai Airshow 2015 takes visitors to 12 November. It is expected that during this time several tens of thousands of people will visit it. The main interest of this salon is for military and civilian specialists from different countries, primarily the states of the Middle East. However, in the exhibition program there are not only serious events for professionals. It also focuses on demonstration flights and other events that will be of interest to the general public.

During the current exhibition, potential buyers of weapons and equipment will be able to familiarize themselves with current offers from their manufacturers. In the future, we can expect the beginning of a number of important negotiations, which will result in numerous contracts for the supply of a product. 23 Russian enterprises brought about two hundred different exhibits to Dubai, from civilian and combat aircraft to spacecraft and anti-aircraft missile systems. Probably, a part of these samples will interest potential buyers and will help the Russian defense industry to replenish its order book with new contracts for the supply of various products.

Photo report from the first day of the exhibition from M. Lystseva:
http://fotografersha.livejournal.com/732761.html