November 10 2015
66
On the eve of the German press (edition Reuters) information was leaked from the Eurocrats that in December they were going to vote for the extension of anti-Russian sanctions. Recall that the first sanctions packages for the Russian Federation, citizens and individual industries and sectors of the economy began to be introduced under the pressure of "partners" from the United States of America last year. After the signing of the “Norman Four” (Russian President Vladimir Putin, French President Francois Hollande, German Chancellor Angela Merkel and Ukrainian President Petro Poroshenko) of the agreements in Minsk in the European Union began to say that they, they say, will cancel the sanctions if the Minsk agreements are respected .
In mentioned German newspaper There was a statement by one of the European officials, who literally stated the following:

There are no grounds for lifting the sanctions on Russia. The Minsk agreements are not fully implemented - the border (talking about the border of the DPR and the LPR on the one hand and the Russian Federation on the other) is not under the control of Kiev.

It is reported that the head of foreign policy Federica Mogherini "with both hands" for the extension of anti-Russian sanctions. True, Federika herself is not able to explain exactly what EU sanctions are following ... 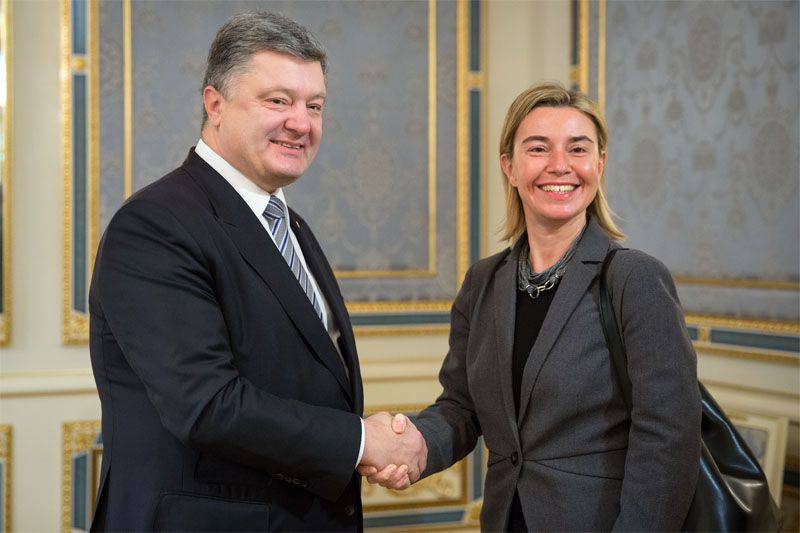 From the statement of the European official in Reuters it becomes clear that in the EU, in fact, is understood as the implementation of the Minsk agreements. If we are talking primarily about the need for the parties to withdraw weapons from the contact line, cease fire, exchange prisoners using the “all for all” formula, disarm illegal armed groups, recognize Kiev’s special status of Donbass with full local elections, and only then the possibility of restoring control at the border, then for the European Union, for which decisions continue to be made somewhere on Capitol Hill, the first few points are omitted immediately. The West (at least in the person of those who are believed to be able to solve sanctions issues) is trying to promote only one point of Minsk-2. This item is about restoring control at the border from Kiev. Like, everything else is not important for us ...

In turn, the following conclusion can be made from the same statement of the European official: Europe was forced to convince itself that the world in Ukraine should not be organized. Or in Berlin, Brussels or Paris seriously believe that if Kiev gets the border under its control, then it will keep from the new punitive operation? If people sit in the chairs of European officials with such thoughts, then this, as they say, is their problem. All the rest perfectly understand the elementary thing: if the so-called control over the border Kiev will be “restored” before all the other points of Minsk-2 are fulfilled (and translated into human language, this means that the troops of the DPR and the LPR will be ringed) Kiev will not be able to resist staging in the southeast another phase of punitive operation, and with transcendent aggression and cruelty. - Operation for the purpose of revenge for all those shameful defeats that the Armed Forces of Ukraine and the NSU have suffered since last spring.

So, in a certain sense, the West would also like to see the “Kiev revenge”, in which the very armed forces of Ukraine, which have reached the point that the NATO functionaries write the concepts for the development of the General Staff of the Ukrainian Armed Forces, will defeat the troops of Donetsk and Lugansk people's republics. There is only one interest in this - to prick Russia by any means, and even better - to be able to shout about the “effectiveness” of anti-Russian sanctions and Ukraine-EU as a “united front”.

It is also clear that the “pressure” that the sanctions should have on Russia, as it turned out, turns out to be Russia to give up and say: restore your control already ... It is for this that European officials are so clumsy and try to ignore all the other paragraphs of the Minsk agreements, which are everything that BOTH parties must do (LDNR and Kiev) is laid out. After all, if you do not ignore, then you need to start the demand from Kiev, but, firstly, overseas owners do not order, and secondly - to ask something from Kiev identically equal to the final discharge of Poroshenko and his team.

So this development leads to paradoxical, seemingly consequences. The political rating of those who at one time led to power, including the American billions, today has fallen to a historic minimum. Yatsenyuk’s “savior of the economy” rating is balanced at 1-2%, Poroshenko’s rating after Korban’s arrest fell to 10-11%, but the West still continues to bet on at least one of these actors, each of whom exploits militaristic rhetoric to varying degrees , trying to cover up all its political and economic failures with absurdities about the "guilt of Russia".

The most interesting thing is that official Kiev would probably be happy to exchange “everyone for everyone”, give Donbass (albeit declaratively) a special status, stop fire in the area of ​​the contact line - all with the sole purpose of restoring border control and subsequent punitive “Revenge”. But official Kiev is not in a position to explain this strategy, launched “from above,” to homegrown radicals. Radicals do not want to wait and can not - give them, you know, blitzkrieg ... On the gene level, judging by everything, ...

And then how: if Poroshenko appears behind the podium and reports: “they say, let’s go to the Donbas on all concessions now, and then let this Donbass go according to the Croatian scenario, then the plan will be covered with a copper basin. For obvious reasons ... And Poroshenko has to wink at the radicals with one eye: they say, but wait, let's create the illusion of the world, then bang again together ... But only Poroshenko’s winks are perceived by Ukrainian radicals as “betrayal of the ideals of Maidan”, “separate peace with the aggressor "and ridicule all sorts of" dill "and" pravoseki ". Poroshenko is certainly not an idiot, and he understands everything perfectly - he understands that his signals and mimic gestures in the right way do not reach the radicals.

And again for the pro-resident stalemate. After all, if the same European Union Poroshenko declares that he is “not lucky with the people,” and that among the “patriotic” people there are too narrow and misunderstood big strategies, then the European Union will not stroke the head. Moreover, in Brussels they can report that the irreplaceable, Pyotr Alekseevich, does not happen ... If Poroshenko will be silent, like now, trying to show that everything, they say, is under control, then statements about the endless extension of non-working anti-Russian sanctions from European officials - in principle , the only thing that, perhaps, will warm Poroshenko’s soul, who is not able to calm the radicals and, as a result, is not able to rule the country. In this case, even if Kiev ever regained control on the Donbass part of the border, it is not a fact that other parts of the border will remain under the control of the present Kiev by that moment. But this, as they say, is completely different. история...

Ctrl Enter
Noticed oshЫbku Highlight text and press. Ctrl + Enter
We are
Situational analysis of the death of the MH17 flight (Malaysian Boeing 777), made on the basis of engineering analysis from 15.08.2014Results of the week. “Unlike everyone else, I went to the army for spiritual reasons.”
Military Reviewin Yandex News
Military Reviewin Google News
66 comments
Information
Dear reader, to leave comments on the publication, you must sign in.