Compensation for the "Soviet occupation"? Not before returning Vilnius and Klaipeda to their owners.

November 10 2015
80
The fuss that has been going on for two decades with the attempts of the Baltic states to obtain compensation from Russia for “Soviet occupation” eventually resulted in a “memorandum of cooperation”, signed in Riga on November 9 by the Ministers of Justice of Estonia, Latvia and Lithuania. 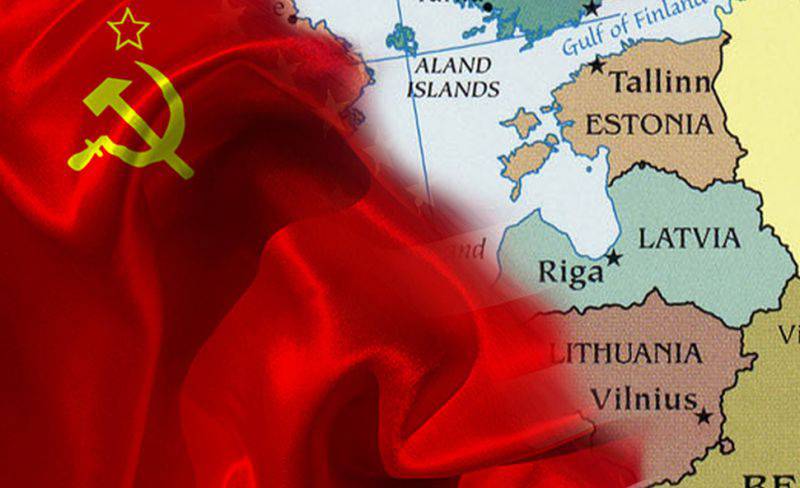 During the years of independence of these former Soviet republics, the servants of the Baltic Themis have become adept in presenting ridiculous demands to Russia. Although in the 1940 year, all three republics became part of the USSR as a result of the elections, this fact is opposed to political doctrine, according to which the elections of 1940 of the year are regarded as held “with a pistol at their heads”, and the period from 1940 to 1991 was as an occupation by the USSR. “... It is the legal continuity of the existence of the Baltic countries that makes such a demand possible. According to international law, in the event of occupation, both compensation for material damage and an apology in the form of satisfaction can be claimed, ”said the participants of the Riga meeting.

Recall that the “Memorandum of Cooperation” did not appear from scratch. In Latvia, a commission that measures “damage” has been working for many years. So far we have agreed on the amount of 300 billion euros, but the figure is not final, they are trying to increase it all the time. Similar calculations are also made by Lithuania, where so far 830 billion dollars have been counted somewhere.

Estonia behaves a little more restrained. Understanding that instead of money, they can only be offered “ears from a dead donkey” (as Deputy Prime Minister of the Russian Government Dmitry Rogozin responded to the absurd claims of the Baltic ministers), Estonian politicians are ready to be satisfied with apologies from Moscow. And Estonian Prime Minister Taavi Rõivas criticized the ministers of justice for pointless fuss. According to him, he does not understand what his country can really get from the above-mentioned memorandum.

Nevertheless, the direction of collective paranoia is determined - to demand penalties from Russia. True, these fundraisers admit that they have difficulties with the method of calculating the amount they would like to receive. The ministers agreed that their first practical step should be the unification of “damage” assessment methodologies. Then they are going to jointly formulate a claim for compensation for “damage” in accordance with international law and to prepare legal steps for its presentation. Estonian Minister of Justice U. Reinsalu says that in addition to the demands of the states, there are possible collective demands of individuals for Russia as a “successor to the occupying state” and “for enterprises that used slave labor”.

It would seem that the idea is so absurd that it is enough to make fun of it, as D. Rogozin did, and that’s all. However, let's not hurry. Fundraisers from the Baltics are not simpletons, they act like in the old joke: even if there are spoons, the sediment will still remain. The lawsuits launched against Russia will, as potential claimants hope, to drag the doctrine of “Soviet occupation” into international law. Having done this, the ethnocratic regimes that exist in the Baltic States, expect to solve a number of urgent problems for them.

First off historical responsibility for cooperation with the Nazis during the Second World War and affirm the “right” to number collaborators as fighters for “national independence”. In this case, the authorities have their hands untied to destroy the monuments in honor of the Red Army, the prosecution, including criminal, of former Soviet soldiers, and the ban on Soviet symbols. And even, as the events of recent days show, to stop cultural contacts with Russia: I mean the sensational ban on concerts of the Academic Song and Dance Ensemble of the Russian Army named after A.V. Alexandrov in a number of cities in Lithuania and Latvia under the pretext that these concerts would become “one of the well-paid instruments of Moscow”, striving to “split the Lithuanian society” (this is the opinion expressed by the Minister of Culture of Lithuania Sharunas Birutis).

The “Soviet occupation” doctrine is also a prerequisite for the preservation of the disgraceful institution of mass statelessness in Latvia and the institution of stateless persons in Estonia (the official Estonian name is “persons with undetermined citizenship”). Here the local Russians are called invaders or descendants of the invaders. The legal basis for such discrimination was the acts adopted by the authorities of Latvia and Estonia at the beginning of 1990, according to which the citizenship of these countries was recognized only for those residents who could prove the residence of their ancestors in these territories until 1940.

“If we abandon the concept of occupation, then we put our policy on citizenship, on non-citizens and their rights and other key issues at risk. It is clear that we cannot go to such a step ”- these words, frank to cynicism, sounded in 2005, belong to the Chairman of the Foreign Affairs Committee of the Seimas of Latvia, Vaira Paegle. Over the years since 10, the situation has only worsened: the number of “blacks” (as in the local slang is meant non-citizens, mostly Russians) in Latvia today is about 300 thousand people. In other words, about 15% of the country's population are completely excluded from participation in political life: they do not take part in parliamentary elections and are subject to more than 80 other restrictions on political, economic and social rights. In Estonia, the same powerless "seropassinators" - about 90 thousands. On them as "invaders" and ethnocratic regimes recoup.

So, in the Baltic States are ready to take decisive steps to completely get rid of the legacy of the "Soviet occupation". However, we recall, gentlemen, that there is a double-edged sword. We are talking about territorial acquisitions that you received thanks to the very "occupation regime."

Recall the fate of Klaipeda, I mean the German Memel. In 1923, he was transferred to the League of Nations of Lithuania and it was then that he received the current name. 22 March 1939. Germany sent its troops here. The fascist occupation of the whole of Lithuania was inevitable if the Soviet Union, while concluding a non-aggression treaty with Germany, did not insist on the inclusion of the Baltic states in the zone of its geopolitical interests. And the fact that now Klaipeda is a Lithuanian city is a merit of the Soviet Union.

And what about Vilnius, which became a Polish city of Lithuania in October 1939? And he became such precisely because of the military-political efforts of the USSR, specifically the campaign of the Red Army in the eastern regions of Poland defeated by the Wehrmacht. If Berlin reminds about Memel, and Warsaw about Vilna, who then will be considered the aggressor? There is no Soviet in the past. So, “compensations” on the part of Russia, gentlemen, you should wait at least not earlier than you abandon the fruits of “Stalinist expansionism” that you like.

And the last reminder for those who like to cut down money in an easy way, speculating on ranting about the "occupation". 30 June 2015 The Prosecutor General’s Office of Russia announced the start of a verification of the legality of the decision to recognize the independence of the Baltic republics at the beginning of the 1990-s on the grounds that this decision was “made unconstitutional”. Lithuanian President Dalia Grybauskaite and the country's foreign minister Linas Linkiavicius were quick to call the work of the Russian prosecutor’s office a provocation. That they are in vain. The Prosecutor General’s Office of Russia simply returns the situation to the legal field, where all the argument that the arrival of the Red Army in 1940 and then in 1944 brought the Baltic States not liberation, but “occupation”, becomes not only ridiculous, but legally insignificant.

Ctrl Enter
Noticed oshЫbku Highlight text and press. Ctrl + Enter
We are
The agony of Lithuanian RussophobesIgor Shishkin: The concept of "occupation" of the Baltic states, Bessarabia and the "fourth section" of Poland is a challenge to Russia's security
Military Reviewin Yandex News
Military Reviewin Google News
80 comments
Information
Dear reader, to leave comments on the publication, you must to register.