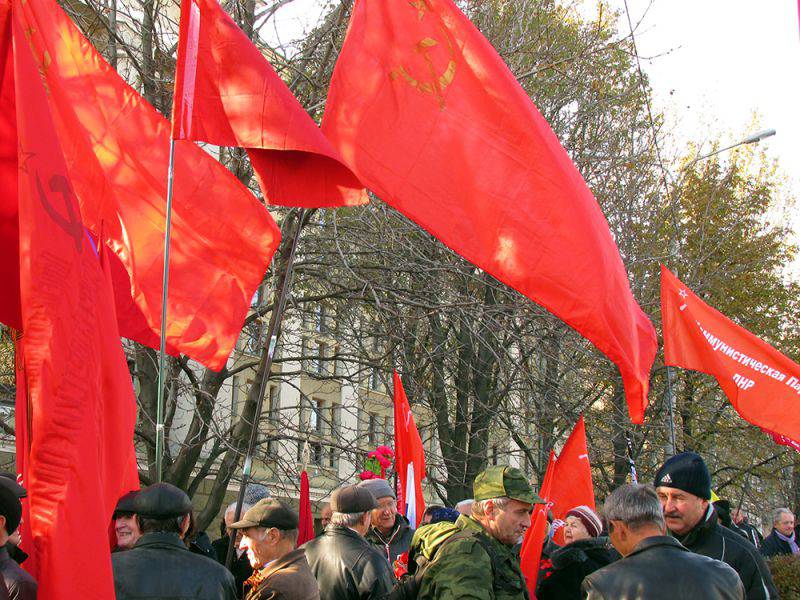 Early in the morning of November 7, a shell flew into one of the houses not far from the center of Donetsk. Fortunately, it did not explode. And although the family living in this house suffered considerable material damage, she was lucky: everyone was still alive. It happened in the Kuibyshev district, on Solovyanenko street. The OSCE mission left for the scene of the shelling, but it is not necessary to wait for any objective conclusion from it. According to experts of the Ministry of Defense of the DPR, the shelling was carried out by Ukrainian punishers from the village of Peski. The fragile truce, which relatively successfully lasted for one and a half months (starting in September), is being broken more and more often by the Ukrainian side.

Contrary to all this violation, Donetsk continues to stand in hard battles - above all, in moral battles. November 7 day was one of the indicators of the fact that New Russia is not Ukraine. That there is no fascism here, do not try to rewrite here history, neither St. George ribbons, nor the red banners of Victory prohibit.

Starting from 10 in the morning, people began to gather around the building of the Republican Scientific Library named after N.K.Krupskaya. Then a procession took place along the main street - Artem street. The demonstrators marched to the monument to V.I. Lenin. To that monument, which at the very beginning of the confrontation, the “svidomi” sent to the city wanted to demolish it, but the Pitmen defended it. There was a rally dedicated to the 98 anniversary of the Great October Socialist Revolution. 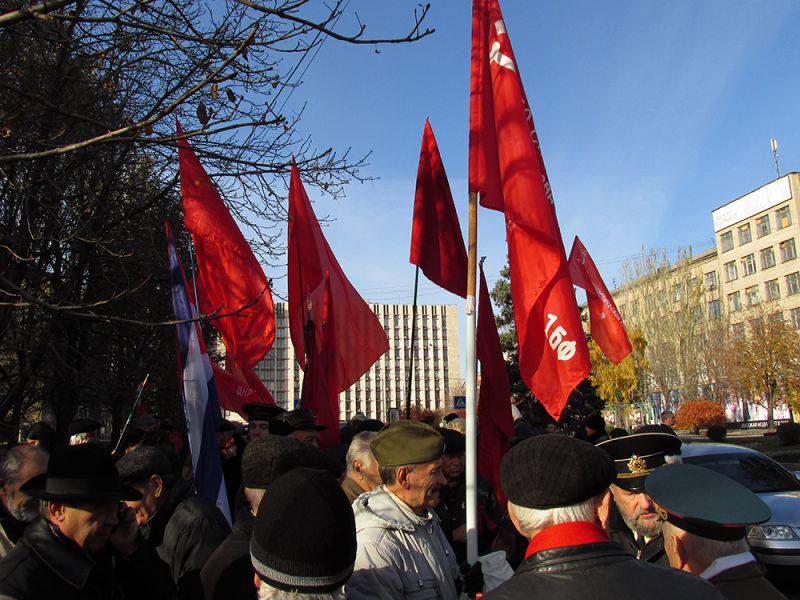 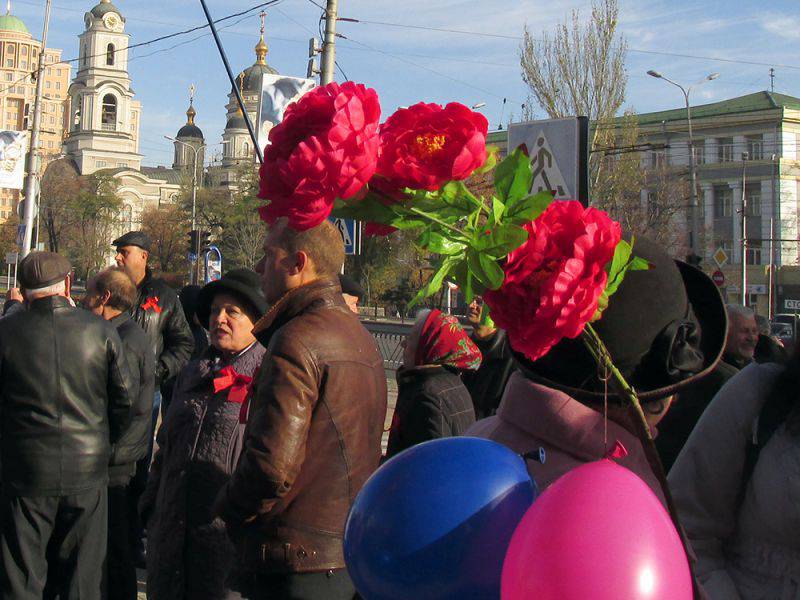 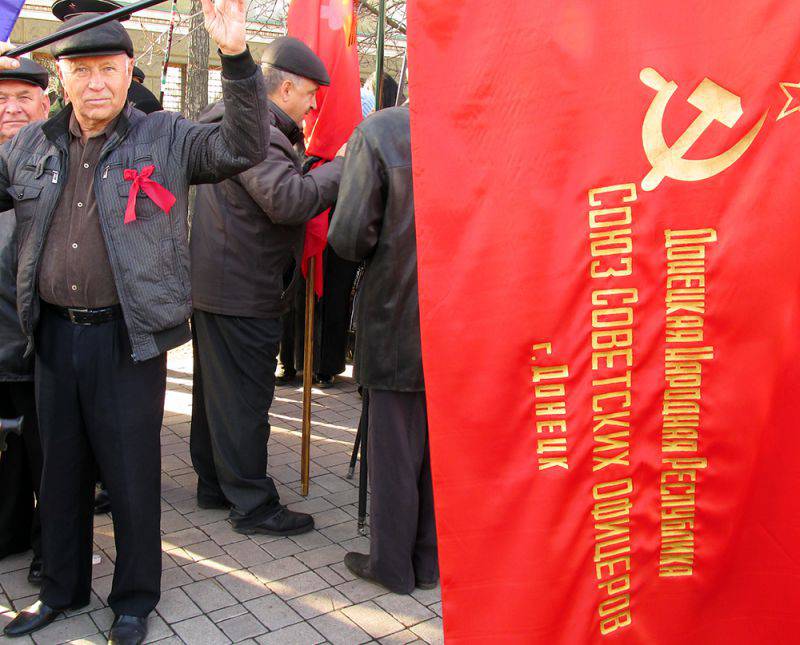 November 7 is another important memorable date. In the thunderstorm 1941, the legendary military parade took place in Moscow that day. The 74 anniversary of this parade was solemnly celebrated in the capital of Russia. And Donetsk, which is now particularly acutely aware of an indestructible spiritual connection with Moscow, also did not stand aside. This is confirmed by the action held on the “red calendar day”. 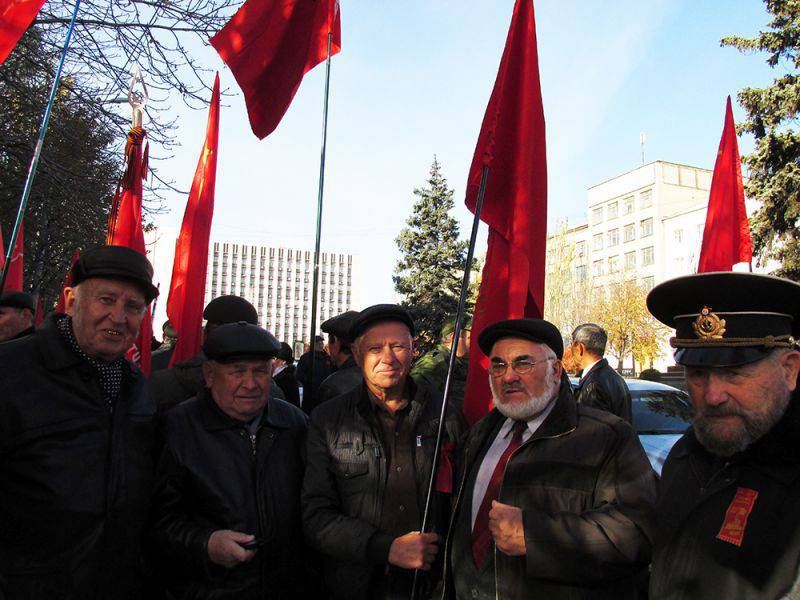 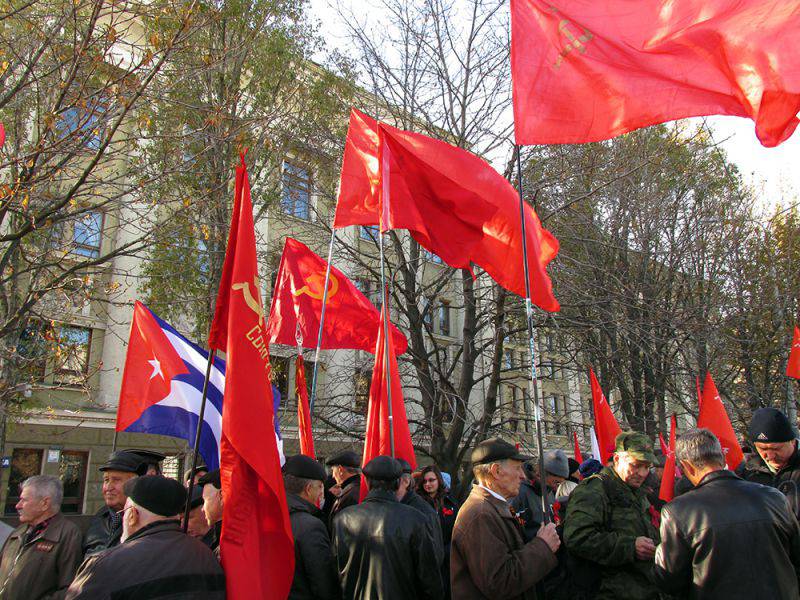 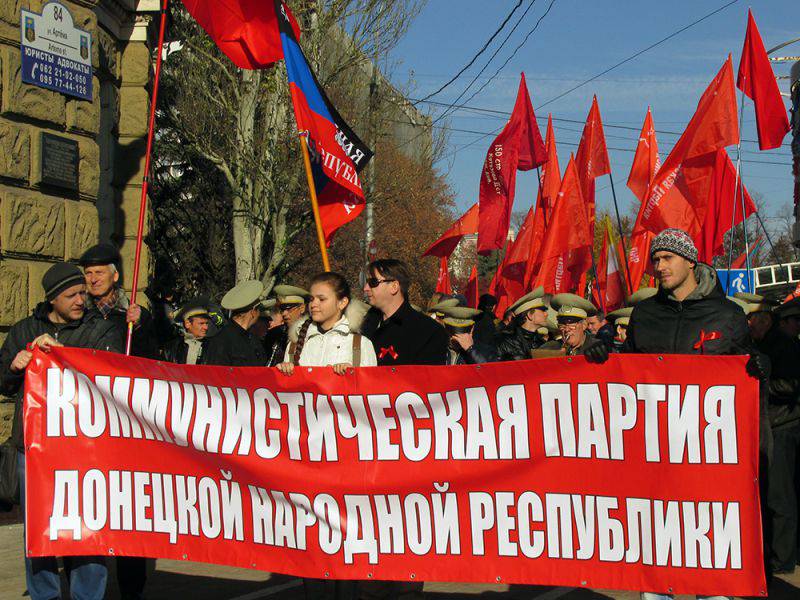 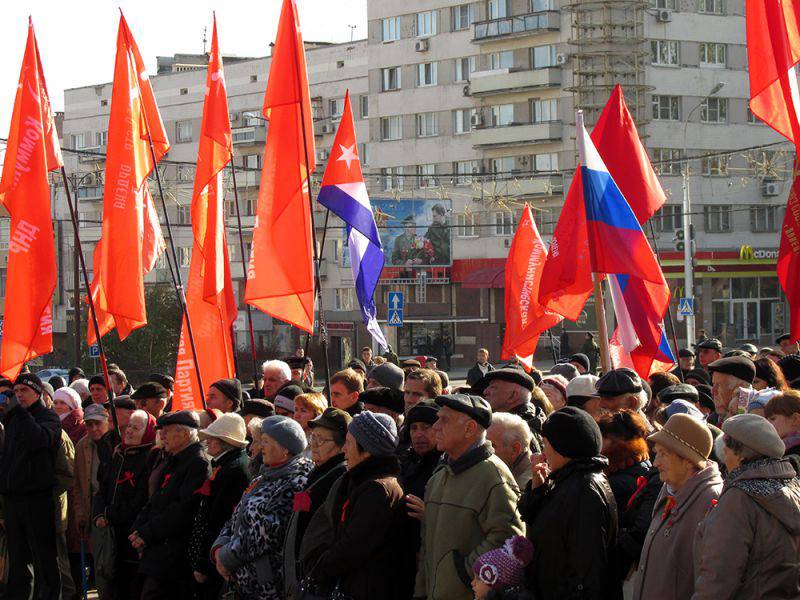 Boris Litvinov, head of the Communist Party of the DPR, deputy of the People’s Council, and his comrades-in-arms laid flowers at the foot of the monument to Lenin. In the crowd, the red change of the USSR, the banners of Victory fluttered, the flag of today's Russia, as well as the Cuban state flag. One of the participants brought the banner of Soviet Georgia. When asked why this particular flag was chosen, he answered: “Because Georgia will be the next Republic of Novorossia, this is a matter of principle.” 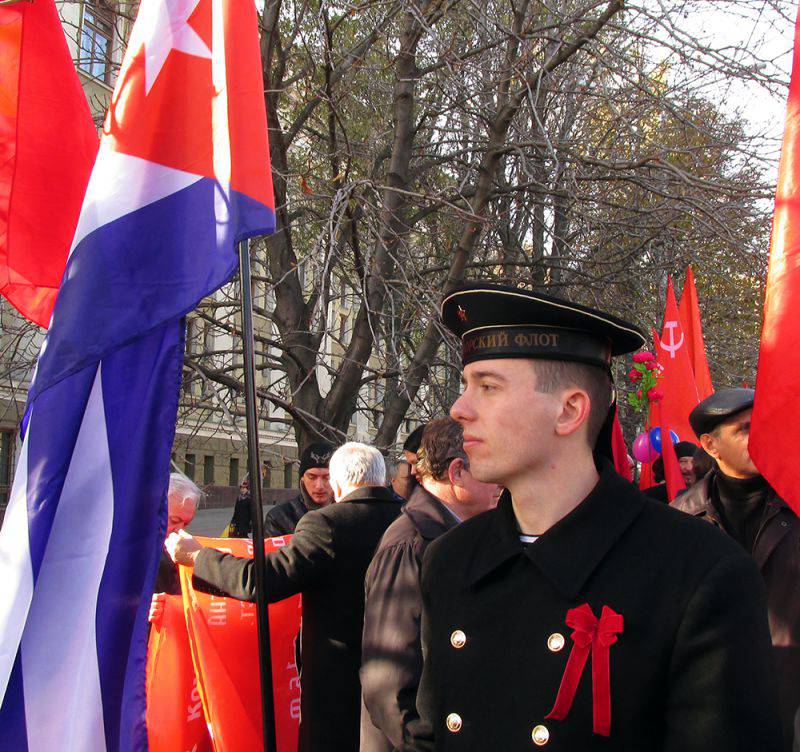 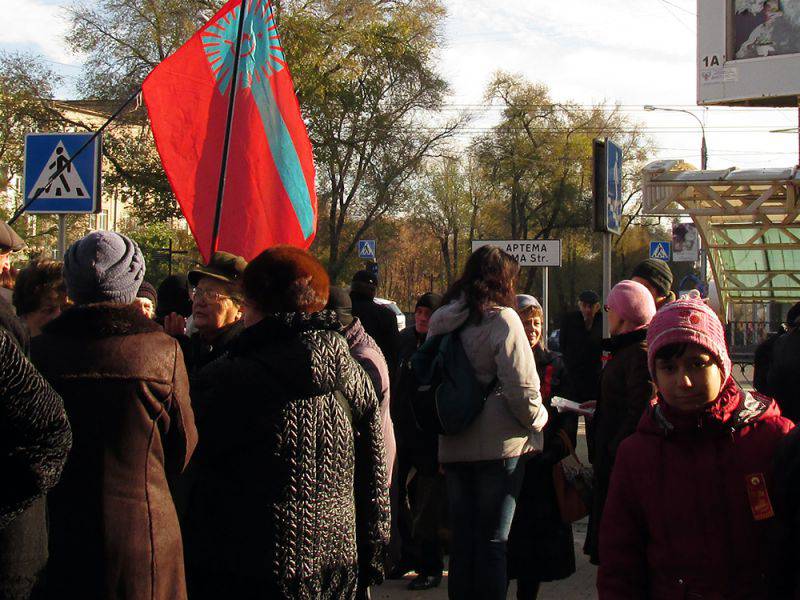 And the participants of the Odessa resistance, located in Donetsk, unfurled the flag of the future Odessa People's Republic, in which everyone here believes. It was the tragedy in Odessa 2 May pushed many to start resistance to ukrofashizmu. 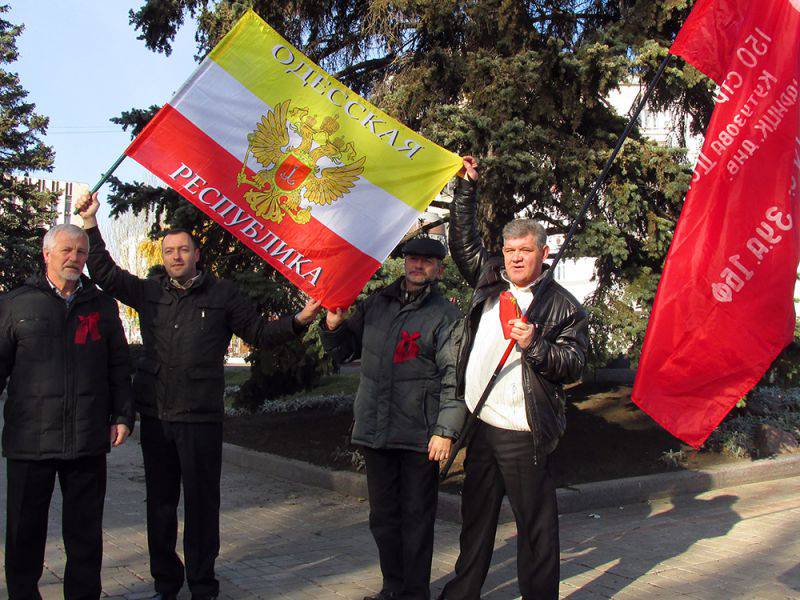 The speakers spoke about the need to remember and honor the great story, of which the 1917 Revolution of the Year is an integral part. They noted the deplorable state of Ukraine, in which it found itself after the collapse of the Soviet Union.

Perhaps one of the teachers, the granddaughter of the Hero of the Soviet Union, expressed the best thoughts and feelings of the audience. “In the media, we often hear that the October Revolution was defeated after the collapse of the Soviet Union. I think it is not. And the proof of this is our Donetsk People's Republic. As soon as fascism raised its head, those born in the Soviet Union stood up to defend their homeland and their ideals. 20 years of robbery and injustice could not kill in people the main thing - mutual assistance, a sense of duty, responsibility, justice. It was all inherent in Soviet education ... A year ago, the Donetsk people voted for a social, just state. I think that our Head will withstand social justice. And we will celebrate the centenary of the October Revolution in just such a state. ” 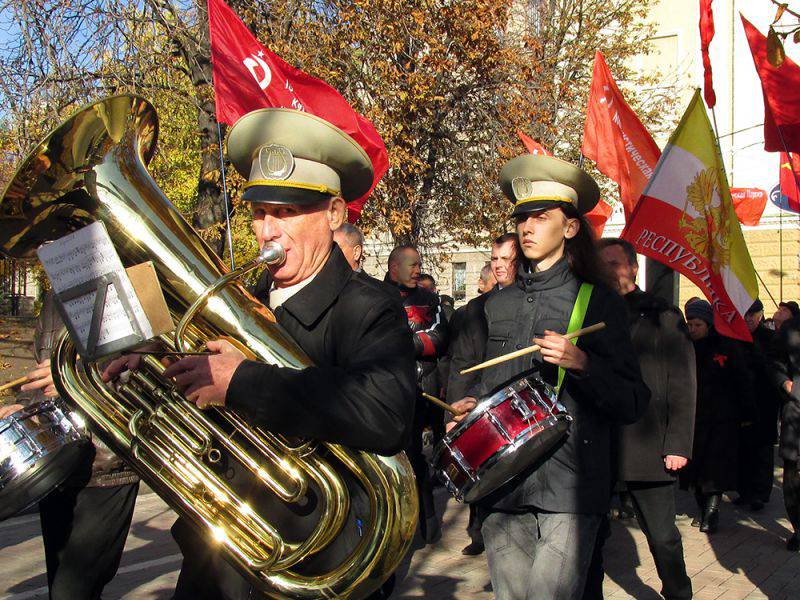 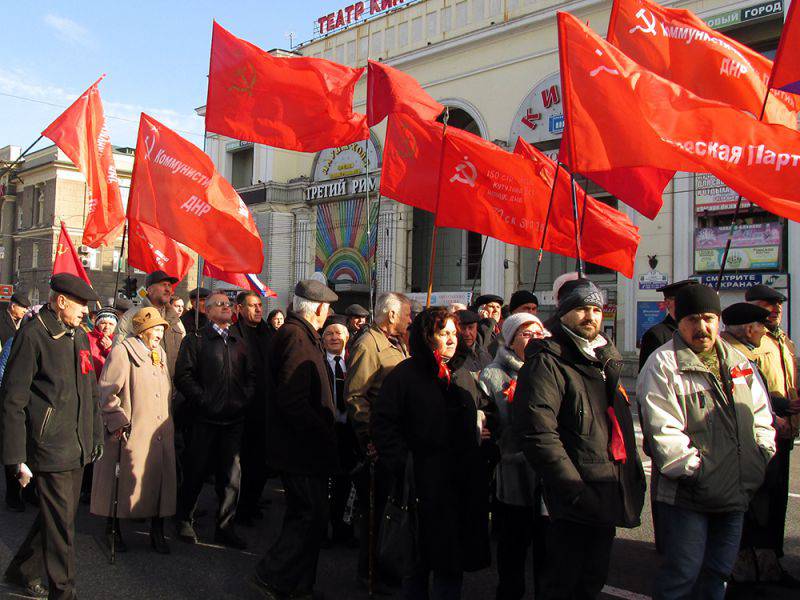 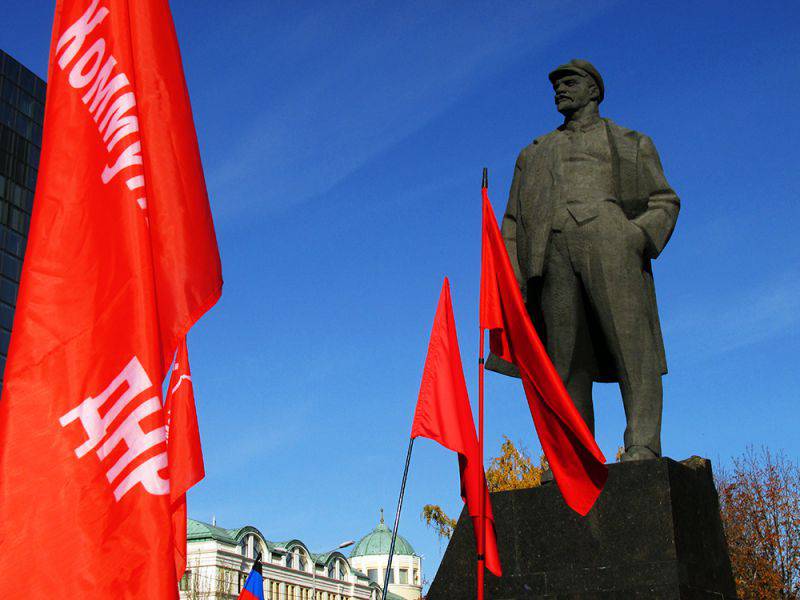 In many speeches it was emphasized that one of the most important tasks was the restoration of what was destroyed by the present war. And here the experience of the USSR in restoring the national economy after the Great Patriotic War is important. 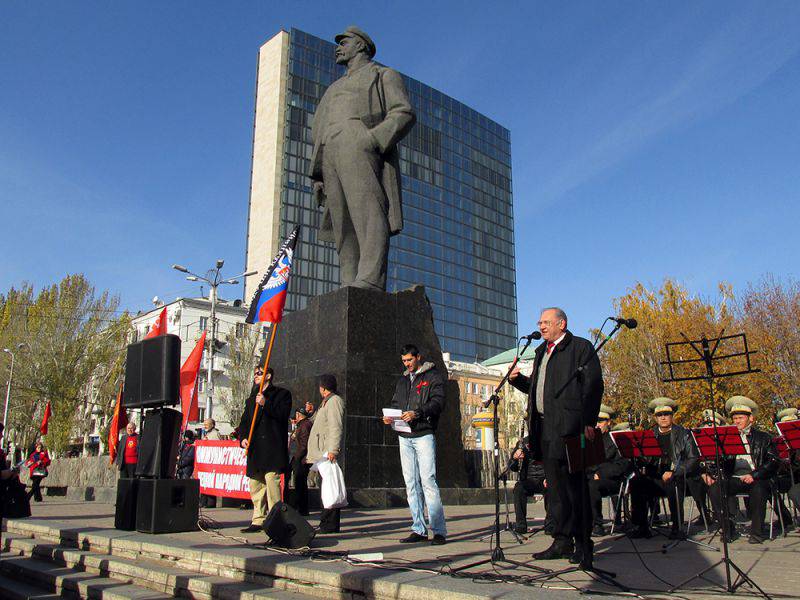 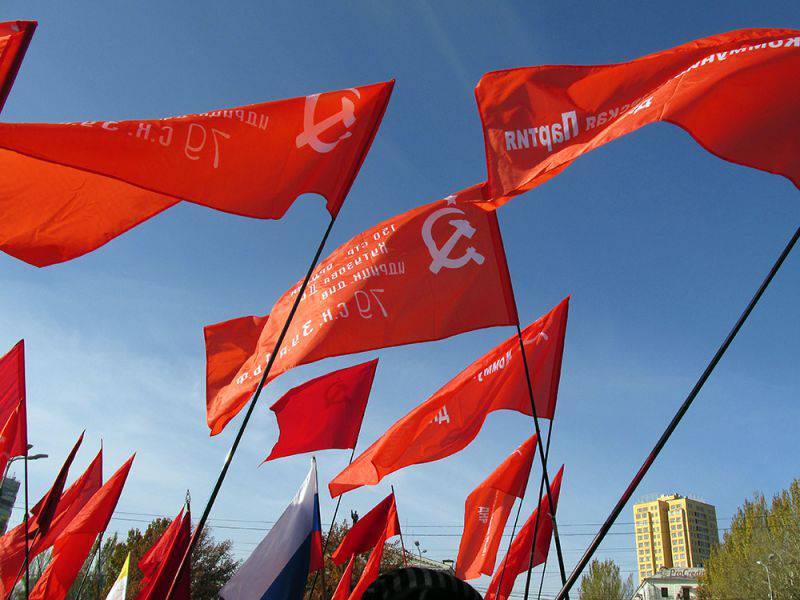 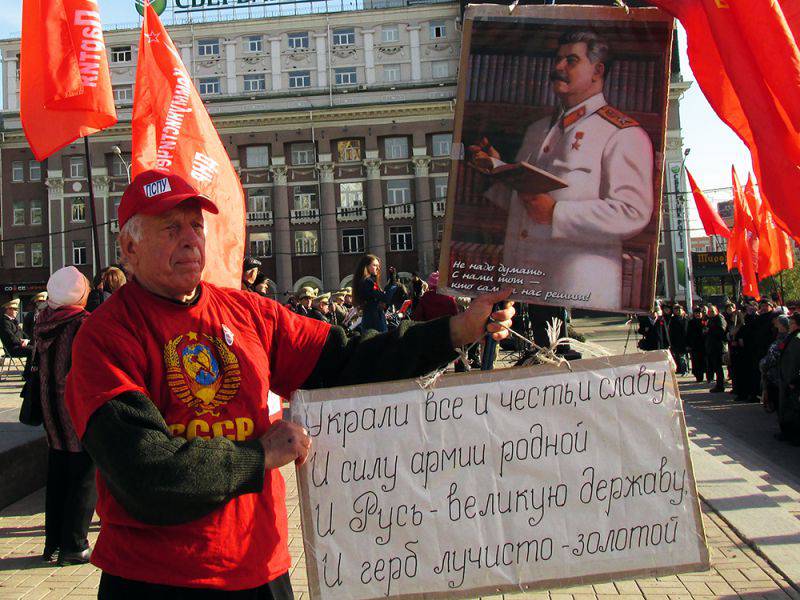 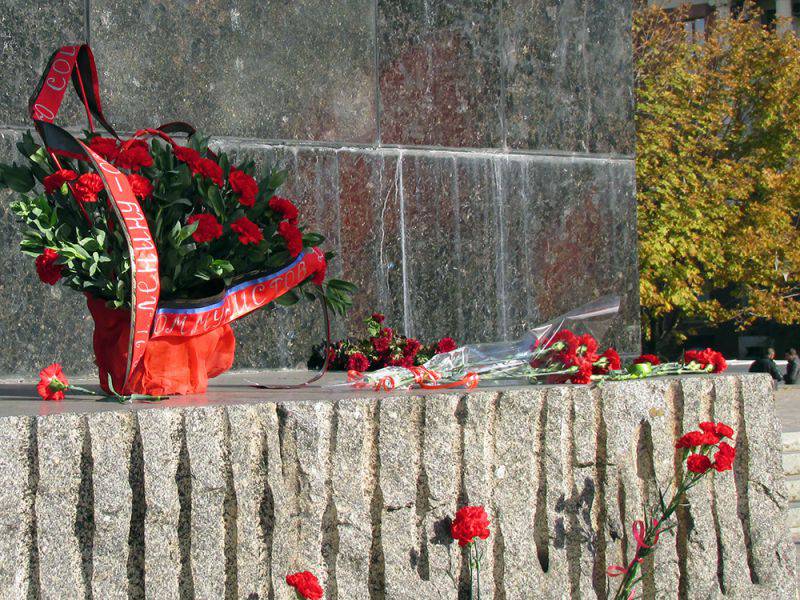 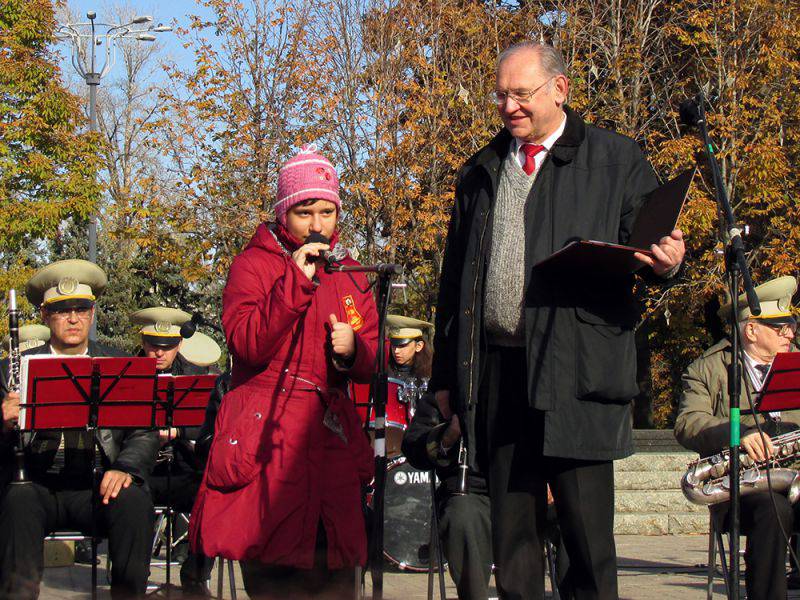 “The rally participants call for unity of action with the head of the Republic, Alexander Zakharchenko, with the government and the People’s Council, and express confidence that under their leadership, together with the people, we will again become masters of our destiny, creators of our history. People will win new victories worthy of those that were won during the years of Soviet power. Our Republic will become sovereign and free, and life will be decent, ”said the final appeal of the action.

After the solemn part of the festive concert. People were happy, dancing, and the day was incredibly clear and warm for this time of year. 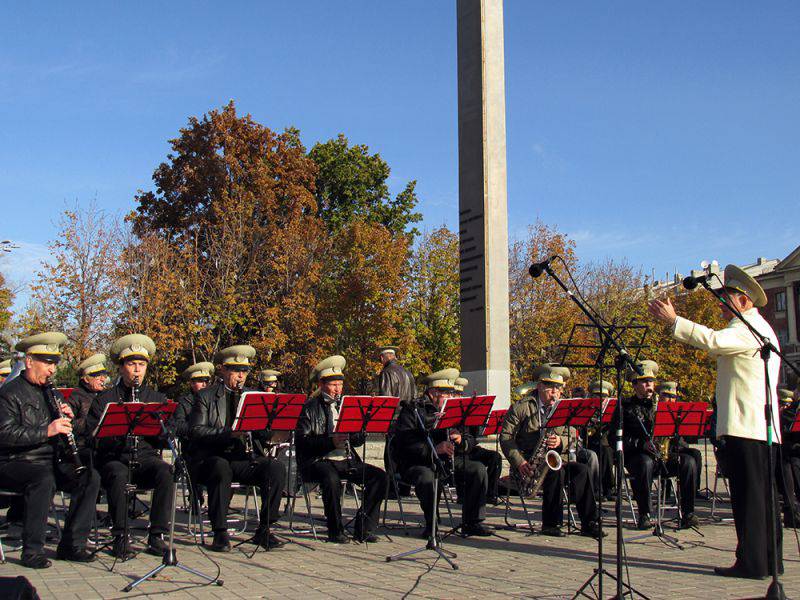 A completely different situation was November 7 in Ukraine, which was under the rule of the fascist junta. There, many people went to the festival, morally preparing for beatings and persecution. In Kiev, despite the ban of the authorities, a small group of brave people laid flowers at the monument to the Fighters for Soviet power.

In Odessa, where the fascist terror is rampant especially cruel, a non-public, but very revealing action was held. The fact is that recently supporters of Nazism painted the fence at the infamous House of Trade Unions in the colors of the Bandera flag. And at night, the brave underground workers wrote on this fence: "Odessites were killed under this flag."

In Dnepropetrovsk, people who came out to celebrate 7 in November were attacked by supporters of fascism from the Ukrop party, they pushed down veterans from their feet, and ripped St. George ribbons off their breasts. And then the “heroes” showed off their adventures on the Internet ...

Last spring, the Donbass made its choice - he did not want to stay in a fascist hell, where neither history, nor veterans, nor traditions are respected ... And he stayed with the Russian world. On November 7, in distant Moscow, children and young people lined up on Red Square with portraits of heroes, forming the word “Victory”. In Donetsk - they sang songs about the Great Victory. We are united, and this unity cannot be destroyed by any punishers, any shells flying in the night ...

Ctrl Enter
Noticed oshЫbku Highlight text and press. Ctrl + Enter
We are
Donetsk: City Day and Miner's DaySituational analysis of the death of the MH17 flight (Malaysian Boeing 777), made on the basis of engineering analysis from 15.08.2014
Military Reviewin Yandex News
Military Reviewin Google News
12 comments
Information
Dear reader, to leave comments on the publication, you must sign in.