November 9 2015
119
The double-headed eagle is a fantastic coat of arms, which is a proud bird with two heads turned to the right and left sides. This heraldic symbol was actively used throughout storieswhile continuing to live in the current realities, he is present on the emblems and flags of modern states. In Russia, this image has a special meaning. Double-headed eagle is used on the coat of arms, presidential standard, flags and emblems of federal agencies, coins, awards. But only the civilian component of the use of this image is not limited. In our country, the double-headed eagle is also the official emblem of the Armed Forces of the Russian Federation. 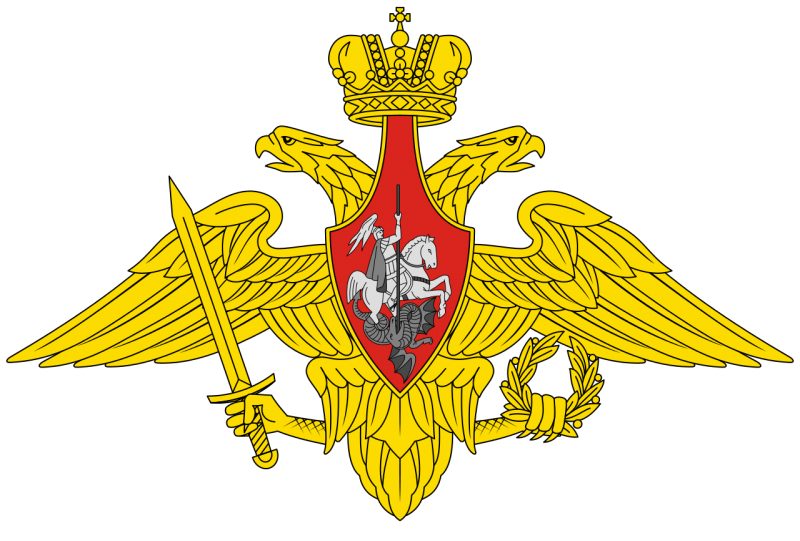 Emblem of the Armed Forces of the Russian Federation

The image of this emblem is placed in the order determined by the Russian Ministry of Defense on:

Despite the fact that, as the emblem of the Armed Forces of the Russian Federation, it is placed on many army objects and objects, its military component has not been studied well enough and is little known. Scientists have not approached this issue seriously. In the Soviet years, these studies were irrelevant for ideological reasons, and not much time has passed since the revival of this emblem in modern Russia. It is known that the first images of the double-headed eagle came from the East. But the question of how and in what capacity this symbol arose was hardly worked out.

Presumably, the appearance of this symbol is connected with the rather mysterious civilization of ancient Sumer (3-4 thousands of years before Christ), where this symbol supposedly had a religious meaning, symbolizing God. The most ancient image of a double-headed eagle at this time is attributed to the 13th century BC. The image was found during the excavations Hattusy - the capital of the Hittite kingdom. It was a double-headed eagle with outstretched wings, in his paws he held two birds with one stone. The image was placed on a cylindrical seal. This symbol was also found on the walls of monumental buildings of other cities belonging to the Hittite civilization. 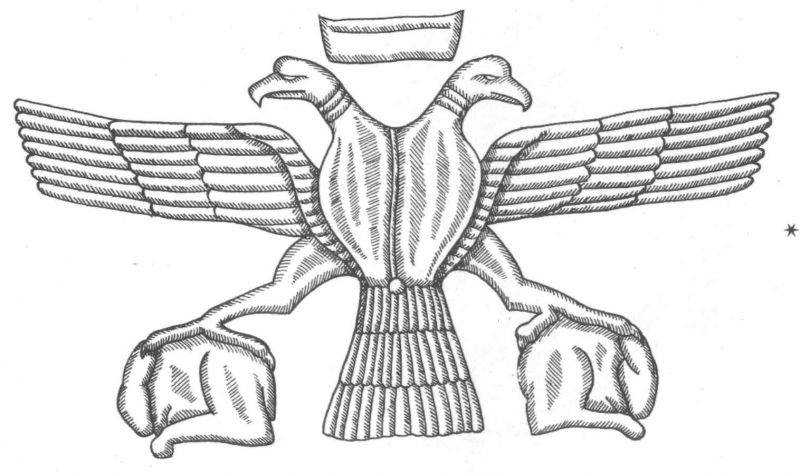 Image of the double-headed eagle of the Hittite kingdom

Thus, we can say that this symbol has existed for several millennia, it was known long before the advent of Christianity. In this case, in some cases, the double-headed eagle symbolized a huge military force. For example, there are references to it in the ancient texts of Hinduism, where it was known as Gandberunda (“ganda” is strong, “berunda” is two-headed). For example, in the Hindu religious text "Vishnu Purana" it was said that the god Vishnu turned into Gundberrund when he needed fantastic power. In each of their paws, the double-headed eagle easily lifted a lion or an elephant into the sky. Vishnu was called to protect the order of the universe. For this reason, he appears as a warrior who accomplishes feats for the benefit of the oppressed and oppressed. He played a crucial role in the battle of the gods and asuras. The image of Gundaberundy is used in Indian military symbolism, for example, it was on the coat of arms of the destroyer Mysore.

Gradually, the idea of ​​this emblem spread to countries and regions neighboring India. Here they were also interpreted as symbols of higher authority and military power. An example of such an interpretation of the image is the acculturation of the two-headed eagle in the rather militant Seljuk empire, in which he personified Allah or the Sultan. At the same time, acculturation of the symbol in the form of a two-headed eagle in the Byzantine Empire bore the imprint of Christianity. In the 6th-9th centuries, the emperor of Byzantium began to be worshiped along with God. Thus, in the mentality of the Byzantines, the idea of ​​cooperation between the two authorities, spiritual and secular, including military, began to take shape.

In addition to the Byzantine Empire, the double-headed eagle managed to visit the coat of arms of the Holy Roman Empire, it appeared here in the XV century. At the same time, the Germanic style of the image of a two-headed eagle began to take shape. This style personified the German warlike mentality. At one time, the German philosopher Walter Schubart characterized him by the fact that the Germans, like born soldiers, love war. The philosopher wittily remarked: "An Englishman dreams of turning the world around him into a factory, a German into a barracks, a Frenchman into a salon, and a Russian into a church." 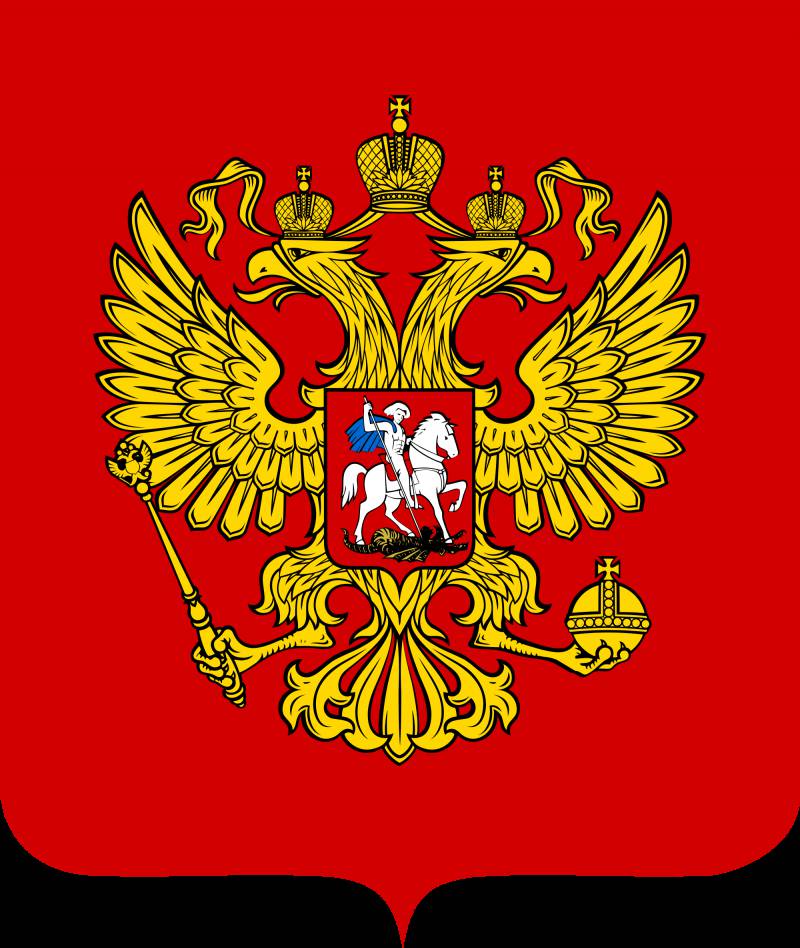 Modern coat of arms of the Russian Federation

At the same time, the military component occupied a key place in the emblem of the Russian Empire. In this case, the double-headed eagle symbolized a victorious military force, vigilant protection of the borders of Russia from the West and the East, being formidable warnings to possible enemies about the inevitability of retribution. At the same time, the image of a double-headed eagle on arms was viewed as a talisman and amulet, which were designed to bring victory to their owner in battle. For this reason, in Russia, this symbol has become very popular among the military. The military component of the Russian coat of arms in some historical periods (especially after the Patriotic War 1812) only intensified. This was due to the fact that a sword, a sword, a beam of lightning, and so on were depicted in the paws of an eagle. As part of the Great Coat of Arms of the Russian Empire, which was approved in 1882, the patron saint of the armistice Archangel Michael with a sword, the motto "God be with us!"

The military component of the Russian coat of arms was strengthened by other images - a scepter, power, ribbon, and especially a horseman who struck a dragon with a spear. A ribbon in the coat of arms of the Russian Empire appeared under Peter I. In 1699, the first Russian order of the Holy Apostle Andrew the First-Called, which had a blue ribbon, was established in the country. This ribbon also adorned the coat of arms of Russia. Moreover, Andrew the First-Called was considered the patron saint of the country and its naval fleet. The scepter was a symbol of the military power of the commander in chief, which made it possible to ensure the independence and sovereignty of the country. The power was a symbol of the integrity of the country, which often had to be set aside with weapons. On the chest of the double-headed eagle was an image of the horseman mentioned many times, which under Peter I began to be called St. George the Victorious. George the Victorious was considered the patron saint of soldiers. During the reign of Fyodor Ivanovich, coins with his image were given to soldiers for courage, they were supposed to be worn on the chest. Later this tradition was developed. In 1769, Empress Catherine II instituted a new highest military award - the Order of St. George, and, starting in 1849, the names of all the gentlemen of this order began to be entered on marble plaques located in Moscow in the St. George Hall of the Grand Kremlin Palace.

For the first time, the double-headed eagle appears in Russia in 1497 year, then it was depicted on the wax state seal. On the front side there was an image of St. George the Victorious, on the back side there was a two-headed eagle. Practically for 500 years of his life in the Russian state heraldry, this symbol has undergone many changes. On the seals, this symbol existed until 1918, and the Eagles were removed from the Kremlin towers only in 1935. Once again, the two-headed state eagle of Russia was returned to the Russian 30 coat of arms on November 1993 of the year by a decree of Russian President Boris Nikolayevich Yeltsin. By the end of the 20th century, Russia had finally legalized all the attributes of modern Russian state symbols. The author of the modern and most common image of the coat of arms of Russia is the People's Artist of the Russian Federation Yevgeny Ukhnalev. 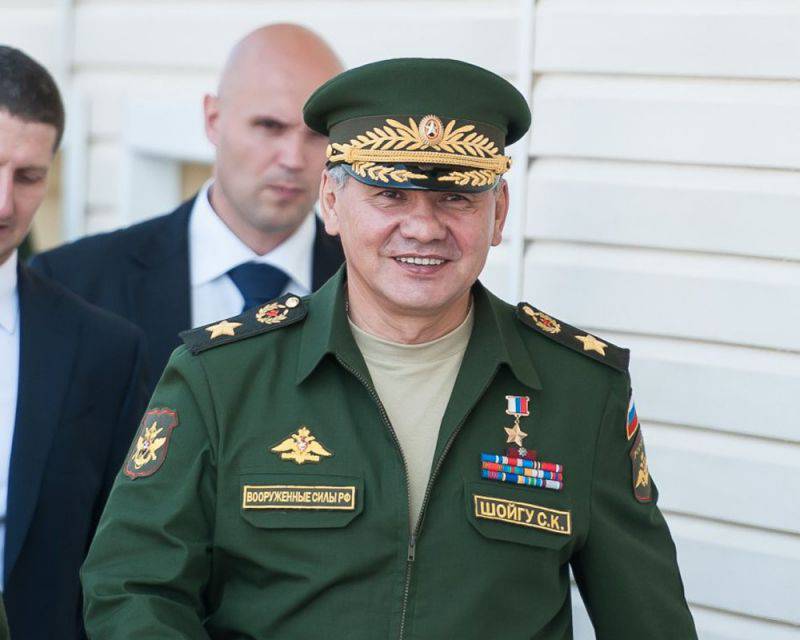 Double-headed eagles on the uniform of the Minister of Defense of the Russian Federation Sergey Kuzegetovich Shoigu.

Speaking of the Russian coat of arms and the emblem of the country's armed forces, one can draw a parallel with the Byzantine Empire, which was also a Eurasian power, in whose territory the majority of people professed Orthodoxy. Greeks, Slavs, Armenians, Turks and many other nations lived in Byzantium. The double-headed eagle with heads that looked simultaneously at the East and at the West symbolized itself and the unity of these two principles. For the modern Russian Federation, this symbol fits perfectly. Russia throughout its history has been a truly multinational country, which united under one emblem the peoples of Europe and Asia. The two-headed Russian eagle is not just a symbol of statehood, but also a symbol of our thousand-year history, the history of our ancestors. Today, it is a symbol of the historical continuity of cultural traditions - from the lost empire, which brought the Hellenistic and Roman cultures to the world - to a relatively young Russian state. The double-headed eagle can be considered as a symbol of unity and unification of the Russian lands.