How is Israel’s “strategic asset” after the Iranian “nuclear deal” and the Syrian conflict? 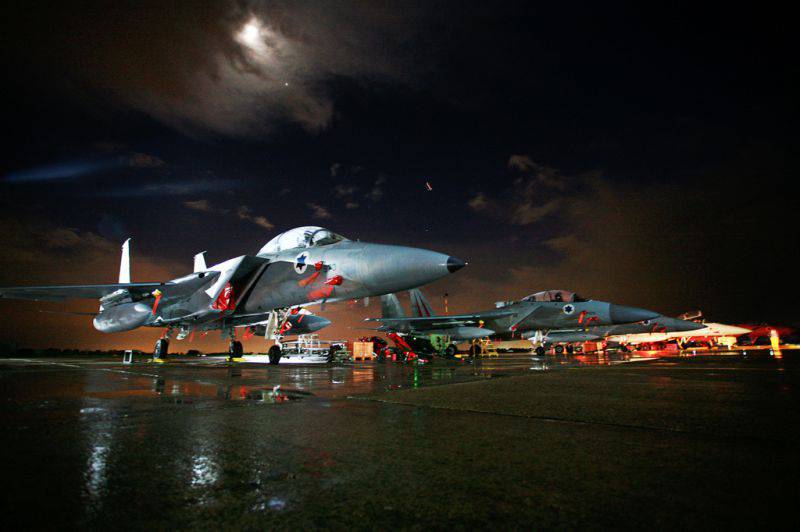 One day, an unnamed Israeli air force major told the media that the F-15 family of aircraft would continue to be a "strategic asset" of Israel for a long time. And this is absolutely not nostalgia for the hot times of the Arab-Israeli conflicts of the middle and the end of the twentieth century, where the pilots of the Israeli F-15A and MiG-23ML often converged in a close air combat, often relying on the psychological endurance and flight performance of their cars, but quite the objective reality of the XXI century, where the F-15 themselves turned into combat vehicles of a completely different sort, both with their own drawbacks and with undeniable merits.

Everyone knows that the Iranian “nuclear deal” concluded between the leaderships of the Islamic Republic of Iran and the “six” countries turned into a real headache for a radically inclined Israel, which all the time and with all sorts of foreign policy instruments strove for a forceful method of influencing Iran’s nuclear program. The thing is that even a partial lifting of sanctions on energy supplies to Western countries, as well as relatively military-technical cooperation with leading world powers, will lead the Islamic Republic not only to a more stable level of economy, but will also significantly increase the power of national armed forces for faster ways that deaths are alike for Israeli regional dominance. The Nuclear Deal reopens for Iran multiple segments of the fuel market and the high-tech electronic industry market, which will allow Iran to receive military electronic equipment not only from China, more accurate and modern air defense and air defense equipment will appear accordingly fleet.

Therefore, now we are witnessing a picture of how Binimin Netanyahu visits Moscow every two months, then in Washington, obviously not from the benefits that the whole foreign policy of this country is aimed at. On Monday, November 9, Netanyahu will again arrive at the White House to meet with Obama, who will become one of the most important for the Middle East state. The primary task of the Israeli prime minister should be confirmation of a 70% increase in funding for military-technical support of the Israeli armed forces by the United States, a secondary one - the transfer of additional weapons, which will include the most advanced tactical aviation complexes of generation 4 ++. From this moment, we return to the F-15 topic as the “strategic asset” of the Israeli Air Force.
The Israeli Air Force has the most solid experience in operating and upgrading various modifications of the F-15 fighter jets. The first military baptism of these machines took place precisely in the Israeli Air Force 36 years ago, when the civil war between pro-Syrian Palestinian units and pro-Israel forces in Lebanon reached its climax. Israeli F-15A were machines solely for the conquest of superiority in the air. For 1979, the flight performance and avionics of these machines were almost at the top of progress: a trapezoid wing of 56,6 m2 area and 13,05 m span and small wing load 330 kg / mX, NUMX axle beyond the 2, combat radius 1,1 fighter, XRUMX radius over the 1500; km, speed 1600 km / h, as well as the most advanced at that time standard airborne radar AN / APG-2650 allowed to carry the plane to the generation of fighter "63". Let me remind you that the Syrians then had only 4-generation fighters of the MiG-3ML, which had absolutely no advantages over the “Eagle” in air combat at small, medium and long ranges; at the same time, other 23 generation machines, the F-4A, have already participated in the battles. Therefore, the ratio of losses in the subsequent Lebanon war was within 16: 1 in favor of the Israeli Air Force. The Russian 2-generation fighters of the MiG-4A and Su-29P then only passed the main stages of flight tests in the USSR Air Force and their use in the theater did not even stipulate.

After the end of the Lebanese war, the military-strategic situation in the Middle East began to change dramatically. Back in 1980, diplomatic relations between the US and Shiite Iran were completely interrupted, as a result of which the already strained Iranian-Israeli relations gradually turned into a real regional confrontation, where almost the entire Shiite and part of the Sunni worlds of the Middle East and Central Asia opposed Israel. It is quite logical that the relatively small probable theater of military operations for the Israeli Armed Forces has increased tenfold (from the previously familiar airspaces of Egypt and Syria to the internal borders of the Iranian air defense system). In such conditions, the combat range of the F-16C / D was absolutely insufficient for conducting long-range strike operations, especially given the need for constant maneuvering between the positions of anti-aircraft missile batteries and radar-based electronic reconnaissance, which were conducted at ultra-low altitudes, where fuel consumption is very high. The Israeli F-15A / C AN / APG-63 radar did not have an air-to-ground mode, so these vehicles were used either for clearing airspace before an MRAU was performed by F-16C, or for escorting Falcons throughout the operation. Since then, Israeli specialists have begun to look closely at new, multi-purpose tactical vehicles that could carry out long-range combat operations independently, and over territories with a developed enemy air defense system. And at the beginning of 90's, Israeli Defense Ministry specialists, inspired by the high technical capabilities of the F-15E “Strike Eagle”, confirmed during Storm in the Desert, forced the government to conclude a contract for the purchase of 21 with McDonnell Douglas tactical fighter F-15E with some technical changes for the Israeli side. In the Israeli Air Force, the car received the name F-15I “Ra'am” and differed from the transatlantic twin “Strike Eagle” only by the nationally developed EW SPS-2100 complex of national development instead of the original REP system “DEWS” installed on American machines. The powerful AN / APG-70 radar with the ability to carry out DVB and terrain mapping, as well as the LANTIRN advanced aim-navigation optical-electronic complex remain an integral part of the Israeli version of the Eagle. 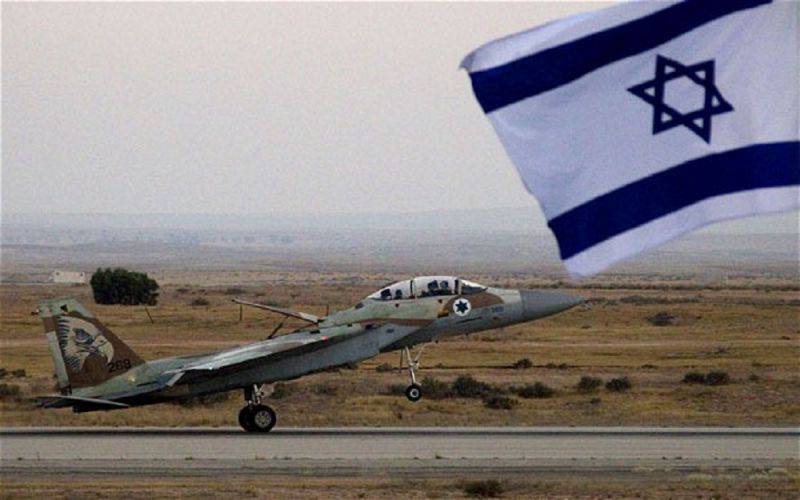 The Israeli F-25I’s 15 remain the newest fighter from the Eagle family, these aircraft being the only long-range strike aircraft of the country

But time does not stand still, both the airborne radar and the radar image of the F-15I already by the middle of the first decade of the XXI century ceased to pose any threat to such air defense systems as C-300PS, Pantsir-C1, and Tor-M1. , actively entering into service with the Syrian and Iranian armies, and the Israeli Defense Ministry attracted the most sophisticated project - the F-15SE “Silent Eagle”, the rates for which are even higher than on the contract for F-35A.

The first guesses about the possible large-scale modernization of the Israeli Air Force came after information about the possible acquisition of X-NUMX light fighters J-150A and several dozen Su-10 unnamed modifications by the Iranian Air Force, which, under the conditions of lifting the sanctions, will finally be able to completely replace their lost potential. Israeli specialists are gazing at Silent Eagle because it is the only Western tactical multifunctional fighter of the 30 ++ generation, combining speed in 4, combat radius with conformal fuel tanks over 2,3 km and a small radar signature (ESR less than 1500 M1,5). Unlike the F-2A, Rafal and Typhoon, the F-35SE can be most effectively used in the air defense system as a long-range high-speed interceptor, the air superiority fighter, the 15M limited speed capabilities of the first three do not make them worthy interceptors even when using MBDA Meteor air-to-air missiles. In addition, in the BVB, the F-2SE pilots will feel much freer than on the F-15A, since the “Silent Eagle” has a larger area and wing span, as well as a slightly higher thrust-weight ratio, and this high. Recently it became known that the F-35S / SE (using the example of Arabian machines) may have 15 additional underwing and fuselage suspension points to accommodate the 8 AIM-8C-120 / 7 long-range missiles, which confirms the high combat survivability of this machine in the new century. The airborne radar with AFAR AN / APG-8 (V) 63 in long-range tasks is not much inferior to the AN / APG-3 advertised “Lightning” radar, the first in typical targets is up to 81 km, second only to the resolution of the Earth’s mapping, and therefore, the overall F-175SE performance indicator will be significantly higher. 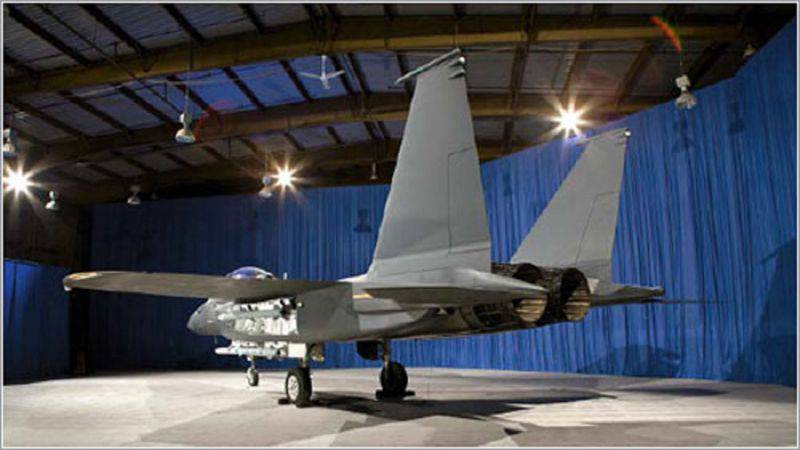 The F-15SE “business card”, which makes it difficult to classify it with an inconspicuous aviation complex of the transitional generation, includes additional internal weapons bays, extensive use of radio-absorbing composites and V-shaped stabilizers that maximally dissipate enemy radar radar

In early October, there was a case of the forced expulsion of the Israeli F-15 by the Russian Su-30CM near the western borders of Syria, apparently the F-15 pilots were assigned the task of ORTR and “probing” the speed of the Russian Aerospace Force near Lattakia, where the Israelis had to leave Lebanon is in complete afterburner, and no one can guarantee that such an incident will not happen again with the participation of more advanced F-15SE in the future, which can lead to very serious consequences. In the DVB, the more subtle “Silent Eagle” is already quite comparable to Su-30CM, this fact should certainly push our leadership to transfer to SAR Su-35С to maintain the security of our contingent, because the first link of F-15C has already arrived at the Turkish a / b Incirlik US Air Force to cover the A-10A attack aircraft (according to the official version). From whom they are going to cover, it is not difficult to guess, because ISIS does not have combat aircraft, and most of the influx weapons in the IG is controlled by the Pentagon itself.

For further forecast of the complicated situation in the region, it remains to wait for details on the number and equipment of future Israeli “Silent” requested from the United States.

Ctrl Enter
Noticed oshЫbku Highlight text and press. Ctrl + Enter
We are
Washington's current regime is reinsured by supplying Qatar and Kuwait with a “strategic asset”History of the Bulgarian Air Force. Part of 3. Postwar period and modernity
Military Reviewin Yandex News
Military Reviewin Google News
56 comments
Information
Dear reader, to leave comments on the publication, you must sign in.