Who will wear the “I am Charly” T-shirt now?

November 9 2015
142
The whole world with unremitting attention is following the investigation of the tragedy with the Russian aircraft. Every day, if not every hour, versions, reviews, photo reports appear in this or that edition. The death of so many innocent people has become a tragedy for many caring people on all continents. Thank you all for the words of sympathy and grief. For empathy to us. 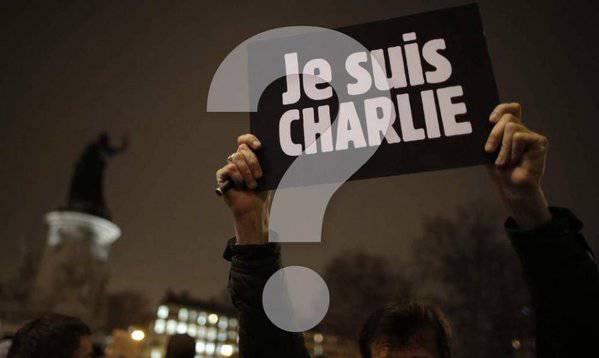 But, as often happens, there were also scum who decided to make fun of the tragedy. The creatures that are called humans are simply unworthy. Only a demon can dance on a grave. Laugh when people cry can only scum.

I'm talking about caricatures in the French magazine Charlie Hebdo. But first - a little bit about the very edition.

Many of the older generation remember the hippie movement. Those who lived in the outback, remember him for television programs. Those who lived in the capital, remember our hippies. As boys, we went to the Old Arbat to look at the greasy and shaggy bearded men and girls, who were located, if I'm not mistaken, somewhere near the Vakhtangov Theater. For us it was like going to a zoo or a cinema ... And even the police didn’t take them seriously.

Even the name was taken, according to one of the versions, from protest. French President Charles de Gaulle has repeatedly closed this edition. And after his death, the magazine took the name "Charly". The one who fought with us died, and we are alive and we will live.

What happened? Why, until recently, almost a millionth march with the slogan "I am Charly", and today silence? Let me remind the origins of this march. Ten months ago, the editors were attacked by Muslim extremists for publishing cartoons of the Prophet Mohammed. And the whole world stood up to defend democratic values. All except Muslims.

For a Muslim, such caricatures are an insult. Deadly insult. As, for example, often used in conversations mate with the mention of close relatives for the peoples of the Caucasus. It is an insult. And for him to answer. Mother is sacred.

But Europe and some of our compatriots marched through the streets of European capitals demanding that they resolve such issues peacefully. Without blood. I totally agree. Blood is a terrible alternative to talking. But, on the other hand, there will always be those who, for the sake of an idea or belief, will go to their own death. Who among us has condemned the father of the deceased child in a plane crash with our plane for taking revenge for the death of his child? If there were such, then certainly not the majority.

What happened to the people? Why today for the sake of increase in circulation it is possible to spit in souls? Why is nothing sacred left in the minds and hearts of Europeans? Not all, but some part.

I think not, I am sure that these publications are evidence of the complete degradation of Europe. Exactly. Without tolerance and other beautiful words. Those values ​​that are in Europe - pure zilch. Already not even a declaration. Just words. Europeans have lost moral human landmarks.

Now some readers grabbed the keyboard. The author, in Europe, a lot of normal people! There, there and there were some pickets, demonstrations and other protests. Many sympathize with us. And so on.

I agree. And do not be afraid to repeat. Thank them for the condolences to our grief. Huge thanks from the bottom of my heart. But the presence of such people does not mean that such people are the majority. Ukrainians, risking their health, freedom, and maybe even life, carried flowers to our embassy. And others mocked in social networks and celebrated the death of "quilted jackets." Europeans too. Some understand, others destroy and desecrate the monuments to the dead Soviet soldiers.

The degradation of Europe did not begin yesterday. It began a long time ago. Probably, from the moment when the traditional European values ​​began to be replaced by newfangled American ones. I remember that in my youth I always wondered how this son or daughter did not know where their parents didn’t meet with them for decades. How can you - do not know what parents live? And after their death, suddenly become a millionaire from a beggar homeless. Now it is not surprising. Thanks to the restructuring and construction of the civilized world.

Europe became Europe, taking Christianity as the basis of its civilization. Russia became Russia, based on Christianity. Those who are now thinking about other religions in Russia, I will refer to their own spiritual teachers. Talk and find the differences in your religion from Christianity. Nuances, nothing more.

Once upon a time, the consonance of Indian mantras and Orthodox prayers became a discovery for me. And there, and there the words are not really disassemble. Old Slavonic is not my strong point. And especially the languages ​​of India. But the sound match is complete. And the impact is the same. This is not scientific knowledge, it is my personal observation.

Easier than in Christianity, probably, there is no algorithm for human life anywhere. No need to read hundreds of books, no need to learn the essence of things for years. This is for the most thoughtful and most meticulous. For the common man is the "Sermon on the Mount"! These are the values ​​and commandments of human life. Not hundreds, not thousands. Total 10.

Here are the commandments that the Lord God gave to the people through His chosen one and the prophet Moses on the Mount of Sinai (Ex. 20, 2-17):

2. Do not make yourself an idol and no image of what is in the sky above, and that on the earth below, and that in the water below the earth.

3. Do not take the name of the Lord your God in vain, for the Lord will not leave unjustly those who pronounce His name in vain.

4. Six days of work, and do all your work; and the seventh day is the Sabbath to the Lord your God.

5. Honor thy father and thy mother, so that your days may be long on earth.

7. Do not commit adultery.

9. Do not bear false witness against your neighbor.

And now think, which of these commandments in Europe have already been trampled. And, most importantly, what's left. Why did the Europeans lose themselves so easily? Why waive their rights? Why parents can be deprived of their children? Why do adulterers celebrate victory and wander around Europe with rainbow flags? Why is no one afraid of talking about criminally acquired millions? Moreover, an honest person becomes a laughing stock. Can not live. Why why why...

The cartoons of this, if I may say so, journal, have become in many ways a warning to us. Think where you go. We are thinking. We are trying to find the pivot that will become the basis of our state. But so far, alas, instead of the rod, we are being shoved with American rubles, bank accounts, a new prestigious car. We are trying to Europeanize or Americanize the brain. The main thing is the belly! Live to meet the needs of the abdomen!

But among the Russians, I now completely don’t divide our people into Russians, Ukrainians, Mordovians, Chukchi, Ossetians, Dagestanis, Yakuts, and all the rest, whose homeland is Russia, has a soul. We are all Russian. Like our grandfathers, who lie in the same graves all over Europe, they are Russians. Like our fathers who conquered the North, the Asian deserts, the Siberian taiga are Russians. Like our fighters from the Caucasian republics, the winners in the championships are Russians.

PS I apologize to readers for the sharpness of judgments. But I will not change my opinions. I believe that scum deserves just such words, and the softness of judgments only harms.