Confession of a traitor: how Russian nationalism is buried in Ukraine

November 10 2015
265
We often give the floor to those who are fighting in the army of Donbass. We discuss the situation with them. We more or less understand these people. But we do not know at all about those who are fighting on the side of the punitive battalions of Ukraine. And there are enough of them. And not only from Russia, but also from Belarus, from Kazakhstan and other former Soviet republics. They really fight not for fear, but for conscience. Many are known by their call sign. Upon receipt of such service in the punitive they have their passports withdrawn. However, their real names and surnames are probably known only to special services. The more interesting it will be to learn the "insides" of one of these fighters. 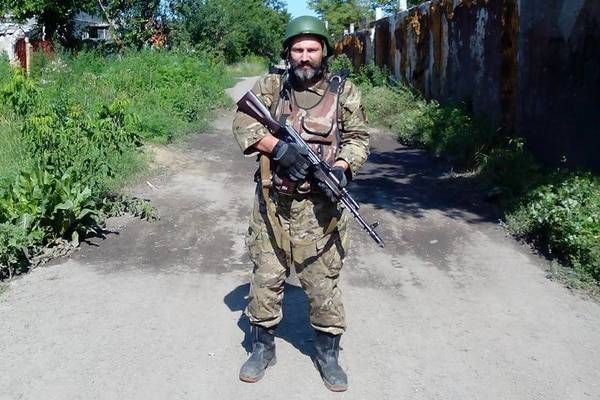 It was not by chance that I made words about treason in the title. And I really think that a person who in any form is harmful to his country is a traitor. And participation in hostilities in the Donbas against the people's republics is no different from participation in the war against their own state. And as if modern "Vlasov" and "Frost" did not try to put themselves on a par with the Spanish 30 volunteers of the last century, everyone understands perfectly well - they supported those who seized power in the wake of the coup. They support the junta.

The interview of this once Russian nationalist was published on the Ukrainian Observer website (Russia is an inverted world: as a resident of Vladivostok, fought for Ukraine). And the reason for this interview is not that the traitor wanted fame. It’s not even that he is very concerned about the fate of Ukraine as a state. Everything is much more prosaic. The wolf saw the flags. Sorry for hunting associations. The forest (in the Ukrainian version of the steppe) suddenly became hostile. Those who were born and lived earlier in this steppe can hide in their “minks”. They are at home. And the wolf is not. His house is far away. But he betrayed him. And now, seeing the flags, I realized: hunters are close. And nowhere to run.

What you read is rather a plea of ​​traitors to the Ukrainian president and government for at least some official status. Otherwise, the deportation to the native “forest” and the camp for a decent time. And by no means pioneer.

Oleg Zhdanov is a Russian who fought in the Donbas for Ukraine as part of one of the volunteer formations. Most of his life he was engaged in arts and crafts, through which he went into paganism.

In his native Vladivostok, he helped like-minded people who brought criminal cases under the so-called “Russian article” - the 282 of the Criminal Code of the Russian Federation. For those who are not particularly knowledgeable in the Criminal Code of the Russian Federation, article 282 is to incite hatred or enmity, as well as humiliation of human dignity. The article is quite interesting. Nationalists call it Russian. It was she who became the main in the fight against nationalism.

How do such people get into battalions? What is the reason for such a rebirth?

"Look, here история This: at first I went to Ukraine as a political emigrant. After that, I helped in one of the volunteer training centers, then I went to the Donbass. Volunteer is my official status in the ATO zone, but it is clear that I did a little bit other things there. "

I think it is clear what lies behind the beautiful "political emigrant." The man violated the Criminal Code of the country. What is the policy? But to say that he escaped from a criminal article does not sound like a "political opponent of the regime." The song is familiar. We have half of London such political emigrants. But those with money. And this peripheral. Beggar.

"Officially, we were going to help dig trenches, but we had to constantly shoot unofficially. We had machine guns, machine guns, grenade launchers — that is, average weaponexcept heavy. "

Poor Russian, Belarusian, Kazakh and other traitors. The entire battalion has heavy weapons, but they are not given. Not Ukrainians. But in fact, this phrase is addressed specifically to Ukrainians. More precisely, the government of Ukraine. See what good soldiers we are? We don’t really need anything. We can and small arms Tanks stop. But you do not grant us citizenship.

"In the first couple of weeks in Ukraine, we tried to get the status of a political émigré, but things are terrible here. You go out into the street - all people support you, it comes out very cool. And you come to the migration service and you understand that the people who sit there, they take a frankly pro-Russian position. Formally, it gives refugee status, but in two cases: you must either be killed on the territory of Russia or imprisoned. The third is not given. This is such a migration policy of the state. "

The state does not want to recognize the traitors? Even a state like Ukraine? What, tell me, is it so surprising and incomprehensible here? Betrayed time - will betray the second. Then the third. The traitor is the essence of man. We know many examples from our history. Each of them believes that betrays only once. But in fact, all life turns into a series of betrayals.

It is very interesting to understand the ideological background of betrayal. In the movies and newsreels, we know that in the Great Patriotic War the majority of traitors were from the ideological, offended by the Soviet authorities. Vlasov, by the way, is more likely an exception from the general list. Or those who most recently "became part of the USSR." Some of them simply looked for opportunities to run across to theirs. And now?

Another question, I must admit that the population of Russia really turned out to be deceived. But here it is logical that they are deceiving you, and do not be deceived. Why didn't I manage to cheat? Why my like-minded people could not fool? There is only one option - in Russia there is a pathological amount of indifferent people. "

So that's it. Killing Ukrainians, this Anika-warrior is at war with Putin. Fighting with us. That is exactly the "changeling", which I mentioned above. The revolution in Kiev was made according to the law, but education in the same way LDNR - no. What is it said for? Probably, in order to inspire Svidomo Ukrainians that Russia has a strong opposition. Just someone left to fight, and the rest are fighting underground. Although Ukrainians are more understandable "in the cellar." They train their own to fight from the caches. What is the Russian cellar.

But there are interesting moments in this interview. Especially the arguments about the Ukrainian state and its goals.

"The Ukrainian state does not have a goal to win the war, it does not have a goal to legalize foreigners in ATO or political emigration. Such structures have goals that are generally amorphous. These structures are sick and partially parasitic. And what could be the goal there? they had less trouble and problems.
And the goals of those in power are to stay in power. What goal can they have? Imagine, in the country of their maydanovtsy a dime a dozen, and then conscious people come from other countries. Naturally, they would somehow get rid of their own, but also foreigners would crawl. "

Here! Parasites on the body of Ukraine are obtained in power. They are going to "conscious and active" to help Ukraine win in an unequal struggle, and Ukraine, it turns out, is not necessary. No matter how much anyone called them to fight for Ukraine, they themselves drew themselves. It turns out that the epiphany comes to these conscious heads, and it is already too late to drink Borjomi.

Checkboxes are already visible everywhere. Wolves do not know where to run? Yes, and disappointment with all he saw felt. Perhaps the war still teaches something. Even a man with the essence of a traitor begins to realize that further fate is nothing but the fate of an outcast. Outcast for everyone.

And as an officer, I was rejected by the following: “Although those lads who had a military education, like Ilya Bogdanov (senior lieutenant of the border guards of the FSB of the Russian Federation) who fought in the Donbas for Kiev,“ cyborg. ”In March of this year, Petro Poroshenko signed a decree on providing he is of Ukrainian citizenship), they in passing, without any policy, went to the ATO zone ".

Nuance smelled? Someone without politics just went to war - the "gently begging." And who has a politician or a “politician” hanging behind his back, the Ukrainian authorities are somehow cautious with those.

An article about a traitor is always written difficult. Vocabulary runs out very quickly and is replaced by profanity. It is difficult to delve into the soul of man from manure. It does not work not to get dirty. But you need to write about these former people. To our memory retained not only the feats of heroes, but the meanness of the traitors. So that after many years it didn’t work out the way it happened in Ukraine. Traitors and murderers of their people suddenly became heroes, and heroes traitors.

This is not in the direction of living in Ukraine, in any part of it. This already applies to us living in Russia. How will it be on or in Ukraine - half the battle. And our main task is to draw appropriate conclusions for the future.

And for the first time I will write an impossible phrase for myself. Correctly Poroshenko does, not satisfying the requests of these renegades for citizenship. Indeed, in Ukraine, their maydaunov enough. And dilute them with foreigners is not worth it. They are like condoms. At some point, very much needed. But after this point they are simply thrown away.

Where we will have to throw away what we don’t need (ready-made traitors and potential traitors) is a question. But a matter of time, I hope.

Ctrl Enter
Noticed oshЫbku Highlight text and press. Ctrl + Enter
We are
Results of the week. "You are not conscious, you have lost your conscience!"Belarusian nationalism is a weapon of the West against Russia
Military Reviewin Yandex News
Military Reviewin Google News
265 comments
Information
Dear reader, to leave comments on the publication, you must to register.