November 9 2015
9
If this history to tell in five or six sentences, it seems that nothing heroic will work. There are no loud deeds here. Moreover, this case will quite remind the chapter from Boris Polevoy's “A Tale of a Real Man” (you will understand which one). But if you take a closer look at all the details, to comprehend all of them, it will turn out not only a case in the life of a boy, but, in fact, a picture of the life of our whole country. So... 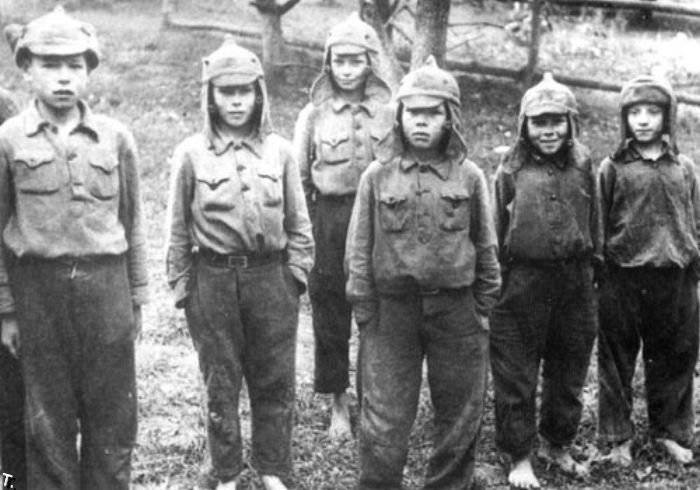 Vanya Zhdanov really wanted to sleep. On the eve of the whole day, he knew how, repaired a well near the house and was terribly tired. The well was old, in some places the logs began to rot, sometimes they completely crumbled, and it was freezing outside, and Vanka’s hands were still inept. How many - eleven years? By today's standards - fourth grade, elementary school, learning by copy, and a cartoon about Masha and the bear. But then it was not so, many worries fell on Vanka’s shoulders, even though they were still skinny and boyish. And besides, Vanyushka saw badly: last year, just before the war, he fell from the fence and cut eyes with a currant branch. Grandmother Nyura, having seen such a disaster, ran with her desperately crying grandson to a local doctor, and then for a long time applied some kind of rags soaked in different solutions to a sore eye. But only Vanka was almost blind in that eye, objects he saw was quite blurry.

At other times, the boy, probably, would not even think about repairing a well in such cold weather - not every adult will undertake this business, but here is a kid. But what's the point of sighing and wailing. Now the war, the father at the front, the woman Nyura and the boy remained in the house. Mom worked at the hospital in Yelets, recently hit the floor of the bombing and died.

Vanka’s shoulders ached, his back was like a wooden one. But no matter how tired the boy was, he was afraid to go to bed. Every night, Vanyushka lurked the same torment. He dreamed of hot chicken soup with flashlights of fat and homemade noodles, which my grandmother can cook so well. Strange thing: before the war, the boy almost did not eat this soup, his nose wrinkled from the thick smell. And now, though they didn’t really starve, but then I dreamed of this soup and dreamed. In the dream, the boy ate it, ate it, feeling the hot force pouring into it. And the soup did not decrease, the clay bowl seemed bottomless.

For many, many nights he mocked the boy at this painful dream. Vanyushka woke up and slowly cried, looking at the two coarse wooden spoons lying on the table. He knew that the vision did not come true for a long, long time. True, there is only one hen in their household called the Howitzer, but Baba Nyura said that she would kill the bird only when the war was over. And this, apparently, not soon.

That stormy January evening of 1942, the fellow villager Fedor Kuzin suddenly went to the Zhdanov hut. Went cautiously - so that it immediately became clear: the message was important and not intended for prying ears.
“Help me out, Anna Yegorovna,” he asked. - At my house the partisans lie. He is wounded, he needs care, and I have no one at home, you know. And there is almost always no me in the house itself, it is not the time to lie on the stove now. Go after him, do mercy! He was wounded in the shoulder, he lost a lot of blood, but things seem to be getting better. It would be possible to transfer to the hospital, but we will not do this yet, believe in the word and do not ask for too much. You know a little about medicine, in our village is quiet. You live alone, hut on the outskirts of the village. Just do not tell anyone about the guest, keep it a secret.

Baba Nura did not immediately agree: it was scary for her to take into the house of an alien sick person. But still agreed. Vanyushka, having heard what was going on, volunteered to help deliver the partisan to their house, but Uncle Fedya dismissed:
- Sit, sit, warrior! I myself will deliver it to you in the best possible way. Wait and be quiet.
And left. And Baba Nyura still grumbled for a long time that Fedor did not even say the name of the partisan, and he even “smoked”. That she, a little, does not understand that such things should be kept secret? Just a few weeks ago, the fascists were driven out of Izmalkovo. And they live with Vanya only five kilometers from the district center, in the village of Metelkino. Not far the trouble is gone, and not the fact that finally.

Vanya smiled slowly, especially when Baba Nyura grumbled loudly about keeping secrets. He already knew that Anna Egorovna did not behave this way because she was seriously unhappy with something. She has such a character: she is not very friendly, as if she doesn’t like everything, she notices flaws in everything. But in fact, Anna Egorovna is very kind. After all, she agreed to take care of the partisan, not regretting the strength of her already poor, or poor stocks of potatoes, turnips and cabbage.

That same night Fyodor brought, or rather, almost brought the patient to the Zhdanovs' house. Partizan was very thin, tall, overgrown with a thick beard, in which gray hair was already glistening. He spoke very little, hoarsely, and ordered to call himself Fedor too.

Baba Nyura helped the guest to change into the old shirt of Vanyushkin's father, prepared a straw mattress and covered it with a blanket. It was agreed that, in case of anything, she would call Fedor as her nephew, although he wasn’t very good at this for years. So what! Any war will grow old. And everyone in Metelkino knew that the woman Nyura had a sister in Tambov.
Vanya was at first afraid of the partisan. Uncle Fedya lay in his corner all day long, sometimes moaning softly, holding his swollen shoulder and trying to smile right at that time. A smile came out sluggish, like a cucumber lying in the bright sun. Apparently, it was very painful.

Baba Nyura every day wrapped a sick hand around a sick rag dipped in some decoction. And for breakfast and lunch, I set a bowl of steaming boiled potatoes or sliced ​​turnip in front of Uncle Fedya. The stocks of Baba Nyura were small, so, as a rule, there were no dinners in the Zhdanovs' house. Maybe that's why Vanya had a dream that he went to sleep on an empty stomach? In general, the daily “norm” was the same for everyone: two potatoes, one small turnip or beetroot, and on Sundays - sauerkraut “tangled” in the oven.

One evening, when Vanyushka tossed on the bed, out of habit, banishing sleep, the partisan suddenly asked:
- Why are you spinning, little girl? Really in a day did not hid?
“Namayalsya,” Vanya whispered timidly. - Only I am afraid to sleep. I dream of soup all the time. With noodles. Hot, delicious ...
“Yes ... A soup would be now,” Uncle Fedya sighed. - Sometimes it seems to me: if I had eaten something hot and fat, I would immediately get up on my feet and go hit Fritz. But the potato is also a business, it’s not for nothing that they call their second bread. You eat it and do not complain, for many, and this is not now. Sleep, Vanya. In a dream, a person comes to power. Times will come, eat plenty of soup and all that you want ...

... Baba Nyura flatly refused to kill the Howitzer.
“And don't dream,” she said. - Now there is no special case. We can do without soup, potatoes until spring is enough.
But Vanyushka had already imagined how uncle Fedi’s face would flare up when he tasted chicken broth. As he gets up, straightening his shoulders, and go to smash the fascist scum.
And at night, waiting for the grandmother and the partisans to fall asleep, the boy quietly left the hut, taking with him an old ax and a blanket.

In a small shed where Baba Nyura was holding a chicken, it was very dark. True, a bright yellow moon was shining through the window, but the boy was almost blind in one eye! He saw the Howit in the corner with great difficulty. The chicken slept, unaware of the trouble hanging over her head. Vanyushka approached her as quietly as he could. He knew that if he didn’t grab the bird right away, there would be no more trying today. She will raise such a stir that the case will clearly turn into failure. And sorry, very sorry for him to kill this poor single Howitzer.
Before the war, the Zhdanovs lived together. And now my father at the front, my mother died under the bombing. They did not overlook the goats that were in their farm, and they ran away. Searched, searched - not found. And now Baba Nyura, Vanya and the Howitzer remained in the hut. And tomorrow will be Baba Nyura, Vanya and soup. “No! - ordered the boy. “Do not dare roar!” And taking a deep breath, sharply threw a blanket over the bird.

Soon Vanyushka left the shed. His reeling from all experienced. Hitting the chicken was much more difficult than he thought. He even remembered that Baba Nyura seemed to have not cut them before, but folded her necks. But the boy did not know how either. Yes, then still in the dark, he plucked her as best he could, without scorching. And as best he could, gutted. It turned out not so good, but as it is.

To feed the Howitzer was the duty of Vanya. Therefore, in the morning the woman Nyura went to work (although she was old, she helped at the pig farm), without having learned anything. And Vanyushka began to cook soup. 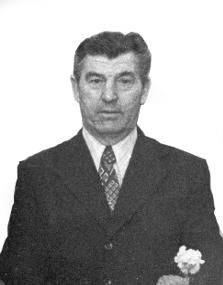 A delicious smell spread over the hut, when the boy barely pulled out a pot of broth from the oven. Vanya was dizzy with hunger, he never stopped thinking that here he was, a dream that had come true! However, the boy poured himself a little in his bowl. After all, he cut down their only Howitzer not to eat himself. He wanted to bring victory ...

Uncle Fedya really recovered soon and went to the front to fight the fascists. And Baba Nyura, whose carriage Vanka had been waiting for with great fear, having learned everything, almost did not scold her grandson. She began to cry ...

... In the war years, Vanya, along with his grandmother, lived in the small village of Metelkino in Izmalkivsky district. Now this village is considered extinct. Having matured, Ivan went to Izmalkovo. He worked here as a tractor driver, then moved to Dankov. And I very much wished that there was only one chicken on their farm. He sincerely believed that otherwise the war would have been shorter. After all, there were still people in their hut who needed help.

Ctrl Enter
Noticed oshЫbku Highlight text and press. Ctrl + Enter
We are
Father told"St. Petersburg" company
9 comments
Information
Dear reader, to leave comments on the publication, you must to register.