The beginning of the second world. Who is guilty? 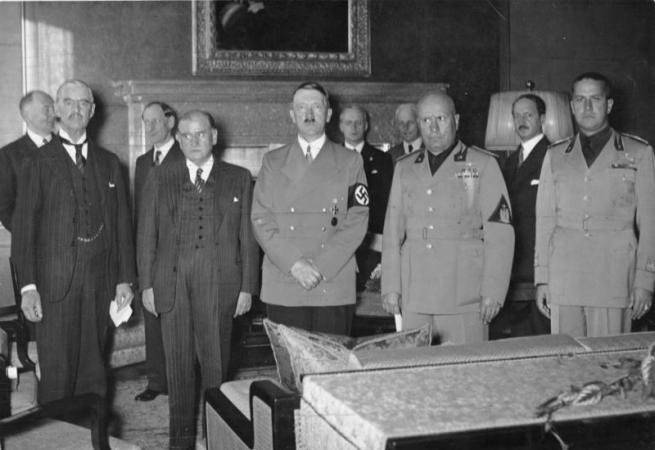 It has now become fashionable to accuse the USSR of fomenting the Second World War, saying that the Molotov-Ribbentrop Pact has untied the hands of fascist Germany. Practically everyone knows about this pact, but we are constantly reminded of this, so that we would penetrate and realize that we are all bastards.

With all this, try not to mention the Munich Agreement 1938, called "Munich Agreement", signed by A. Hitler, B. Mussolini, N. Chamberlain and E. Daladier. Many believe that it is precisely these agreements that led to the war, let's see.

Munich Agreement 1938. The agreement on the dismemberment of Czechoslovakia, reached 29-30 in September in Munich by the heads of government of Great Britain (N. Chamberlain), France (E. Daladier), Nazi Germany (A. Hitler) and fascist Italy (B. Mussolini). The ease with which Hitler carried out the Austrian Anschluss 1938 in March encouraged him to take further aggressive actions, now against Czechoslovakia. After the collapse of the Austro-Hungarian Empire, Czechoslovakia quickly became one of the most prosperous countries in Central Europe. Many of the most important industrial enterprises were located on its territory, including Skoda’s steel mills and military factories. With a population on the eve of the Munich Agreement in 14 million people, in addition to Czechs and Slovaks, about 3,3 million ethnic Germans lived in the country. German-speaking population, so called. Sudeten Germans constantly loudly declared discriminatory measures against them on the part of the Czechoslovak government. Almost half of the 1 million unemployed in the country were Sudeten Germans. The central authorities took all possible measures to reduce the intensity of discontent in the Sudetenland: representation in the National Assembly, equal rights with regard to education, local government, etc., but the tension did not subside. Hitler decided to take advantage of the unstable situation in the Sudetenland region and in February 1938 called on the Reichstag to “pay attention to the appalling living conditions of the German counterparts in Czechoslovakia.” He said that the Sudeten Germans could count on the Third Reich, which would protect them from Czechoslovak oppressors. In the German press, a wave of accusations against the Czechoslovak authorities, allegedly committing atrocities against the Sudeten Germans, rose. Taking advantage of a small border incident that killed several Germans, Hitler pushed German troops to the border with Czechoslovakia, hoping to exert political and military pressure on the country, whose army was only 400 thousand. But the Soviet Union and France warned Germany that they would fulfill their obligations towards Czechoslovakia, and Hitler was forced to withdraw his troops from the border. However, cautious Chamberlain said that he could not guarantee British support in the event of German aggression against Czechoslovakia. Inspired by the indecisiveness of the British government, Hitler decided to rely in his plans on the "fifth column", which was represented by the Sudeten Germans and the pro-Nazi Sudeten German party. At his direction, the leader of this party, Genlein, put forward a number of demands that essentially assumed that Czechoslovakia would renounce sovereignty over the Sudetenland (April 24). 30 May Hitler convened a secret meeting of the generals in Uterbog, at which he declared: "My unshakable desire is to destroy Czechoslovakia as a result of military actions in the very near future." He then announced the order to carry out Operation Grun no later than October 1 1938.

Further events that immediately preceded the signing of the Munich Agreement are as follows: maneuvers of Anglo-French diplomacy to justify before public opinion the prepared deal with Hitler and attempts to persuade Czechoslovakia to surrender; the revolt of the Sudeten Nazi September 13, suppressed by the Czechoslovak armed forces; The Berchtesgaden dating 1938, during which Chamberlain, in principle, agreed with Hitler’s demand for the transfer of border Czechoslovak territories to Germany, merely expressed a request not to begin hostilities (September 15); the English-French ultimatum (18 of September) on the transfer of part of Czechoslovak territory to Germany ("areas need to be ceded to Germany predominantly by Sudeten Germans to avoid an all-European war") adopted by President of Czechoslovakia E. Beneš on September 21; Chamberlain's meeting with Hitler in Bad Godesberg to discuss the new, even more difficult for Czechoslovakia, requirements of the German government (September 22).

At the time of the highest tension, Mussolini advised Hitler to convene a quadripartite meeting to resolve all the problems that had arisen. By agreeing to this proposal, Hitler made a speech on September 26 at a mass rally at the Sports Palace in Berlin. He assured Chamberlain and the whole world that if the problem of the Sudeten Germans was resolved, he would not make further territorial claims in Europe: “We are now approaching the last problem that needs to be resolved. This is the last territorial requirement that I put forward to Europe. 1919, three and a half million Germans, were cut off from their compatriots by a group of crazy politicians. The Czechoslovak state grew out of monstrous lies, and the name of this liar is Benesh. " Chamberlain for the third time went to Germany, to Munich, literally begging Hitler for peace. He wrote: "I wanted to try to do it again, because the only alternative was war."

The Soviet Union and Czechoslovakia were not allowed to negotiate. Chamberlain and Daladier accepted the terms of Hitler and jointly put pressure on the Czechoslovak government. The text of the agreement, drawn up by 29 September, was signed the next day. The agreement provided for the transfer of Germany in time from 1 to 10 in October 1938 of the Sudetenland region of Czechoslovakia (with all the structures and fortifications, factories, factories, raw materials, routes of communication, etc.), satisfaction at the expense of Czechoslovakia during the 3 months of the territorial claims of Hungary and Poland, the "guarantee" of the participants in the agreement of the new borders of Czechoslovakia against unprovoked aggression (the invasion of Czechoslovakia by the German forces in March 1939 revealed the fake nature of these "guarantees"). September 30 Czechoslovak government adopted the Munich dictate without the consent of the National Assembly. Chamberlain, returning to London, happily declared at the airport, waving the text of the agreement: "I brought peace to our time." Shocked by such a policy of connivance to the aggressor, Winston Churchill said: "I will remind those who would not notice or forget, but that nevertheless has to be stated, namely, we have experienced a universal and obvious defeat, and France has demolished even more than we .. And there is no reason to hope that this will be the end. This is only the beginning of reckoning. This is only the first sip from the bitter cup, which will be offered to us from day to day, unless there is an incredible restoration of moral health and military power, if we are not ever again I’m not going to bet on freedom like in the old days. "

The agreement signed in Munich was one of the most striking manifestations of the policy of "appeasement", which was held on the eve of the World War 2 by the governments of Great Britain and France to achieve collusion with Nazi Germany at the expense of Central and South-Eastern Europe, to prevent Hitler’s aggression from Great Britain and France and send it to the East, against the Soviet Union. The Munich Agreement was an important milestone in the preparation of World War 2.