At the air show in Dubai, more than 200 types of Russian technology will be exhibited.

November 8 2015
48
Twenty-three companies from Russia, including MiG, Russian Helicopters and Almaz-Antey will take part in the Dubai Airshow-2015 exhibition, which will be held in Dubai (UAE) from 8 to 12 in November, RIA News with reference to the Federal Service for Military-Technical Cooperation (FSMTC). 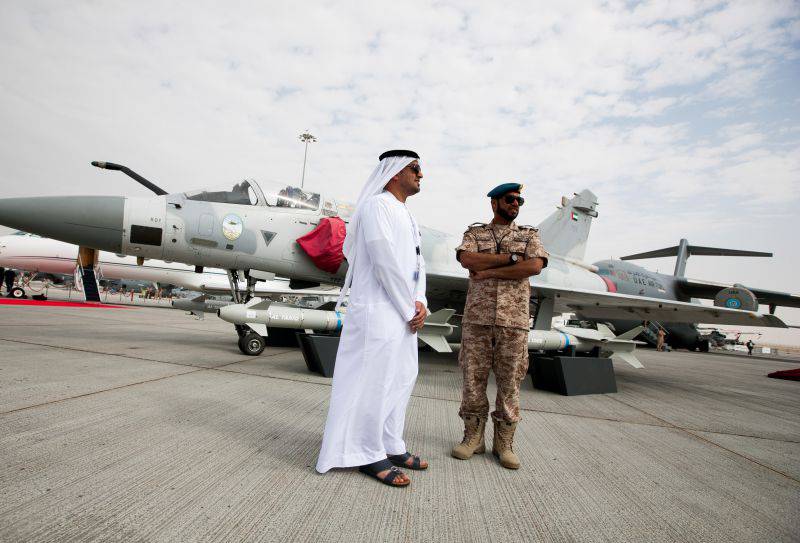 At the Dubai Airshow-2013 air show

“23 of Russian organizations, including 6 subjects of military-technical cooperation: Rostec, Rosoboronexport, Concern AIRT Almaz-Antey, RSK MiG, Sukhoi Company and “Russian Helicopters.” A total of 200 exhibits of military-purpose products will be displayed, ”the release says.

The Russian exposition is organized by Rostec. In total, 800 companies from 50 countries announced their participation.

“The exhibition will be opened by the Prime Minister and Vice President of the UAE, ruler of the Emirate of Dubai Sheikh Mohammed bin Rashid al-Maktoum. Planned daily demonstrations aviation technicians. According to the organizers, invitations to visit the exhibition were sent to representatives of the leadership of the military departments of 103 states, ”the press service informs.

Air Defense Concern Almaz-Antey will present about 20 samples of its products.

“At the upcoming international aerospace show, the concern will present about twenty product samples. Visitors to the exhibition will be able to familiarize themselves with the well-known and well-established products of the concern, such as the C-400 Triumph long-range anti-aircraft missile system, the Buk-M2E medium-range anti-aircraft missile systems and the short-range Tor family ”, the concern.

There will be new items. In particular, “guests and participants of the event will be able to familiarize themselves for the first time with a mobile three-coordinate radar station (radar) of medium and high altitudes of the 55-X6UM standby mode and a number of other radar complexes,” the company noted.

“At the moment, the Middle East region is one of the most promising markets for Russian air defense systems. During the work of the air show, our specialists plan to hold a series of negotiations with foreign partners, ”said Vyacheslav Dzirkaln, deputy head of Almaz-Antey.

Russian Helicopters will present Ka-52, Mi-35М and Mi-28НЕ helicopters at the exhibition.

“The exhibition will include presentations of Ka-52“ Alligator ”, Mi-35M and Mi-28НE“ Night Hunter ”combat helicopters for official delegations from Africa and the Near and Middle East. They will meet with representatives of the region’s power structures, where the holding’s specialists will talk about the possibilities of using Mi-171Sh, Mi-17В-5, Mi-35М helicopters to fight illegal armed groups, ”the holding’s representatives told.

“Today, Mi-8 and Mi-24 Russian helicopters are involved in a military operation against the terrorists of the Islamic State in Syria, and Mi-171Sh, Mi-28HE and Mi-35M helicopters successfully fight IG militants as part of the Iraqi military Air Force, ”noted the company.

Ctrl Enter
Noticed oshЫbku Highlight text and press. Ctrl + Enter
We are
Innovation Day of the Southern Military District: Pictures from the ExhibitionThe action “Military service under the contract is your choice!” In Rostov-on-Don: future contract servicemen, exhibitions and “Russian Knights”
Military Reviewin Yandex News
Military Reviewin Google News
48 comments
Information
Dear reader, to leave comments on the publication, you must sign in.