The essence of the project of the Chinese tactical "Drying" J-17: "Fullback" at the gates »5-th generation 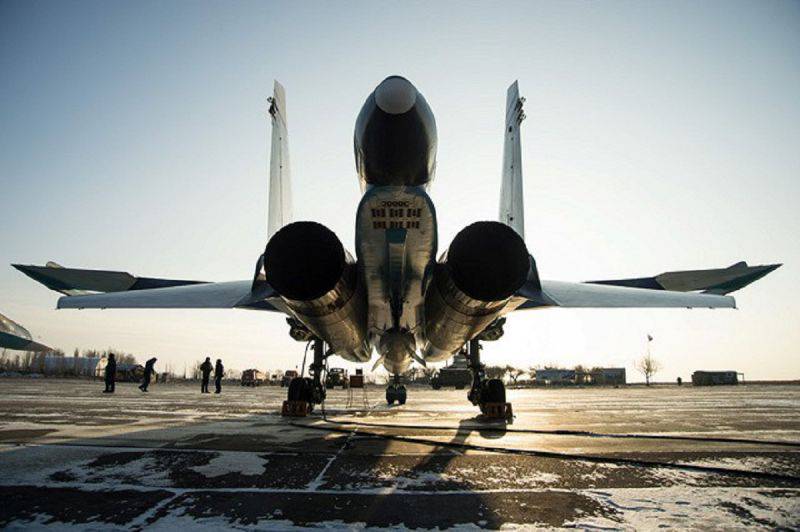 The issue of the operational-strategic alignment of forces in the Asia-Pacific region, where China does not yet have any military-technical advantages over the US Navy and US Air Force, as well as the anti-Chinese bloc Navy, has already far from been in one of our materials. The program of the unobtrusive strategic bomber YH-X, capable of controlling the Pacific zone within the boundaries of the “three chains” strategy, is steadily advancing, noticeably (by 5 - 7 years) lagging behind the gain rates in the US and Japanese Navy. For example, General Dynamics almost once a quarter - the half-year manages to launch more and more new destroyers of Arle Burke-class nuclear missile systems; the last was EM URO DDG 115 USS "Rafael Peralta", launched on October 31 2015. 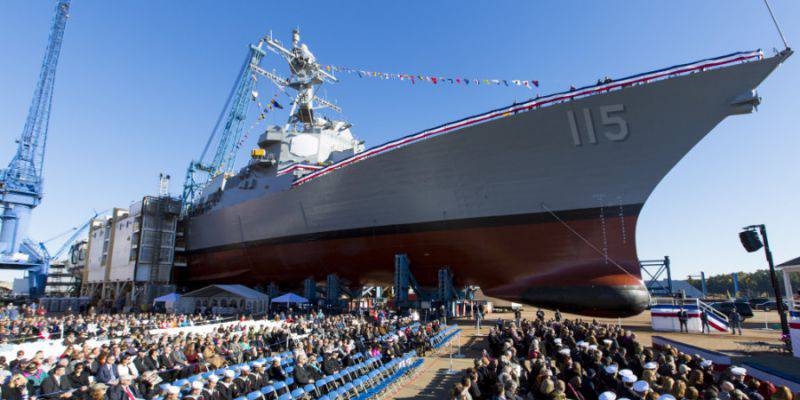 Launching of the most modern "Aegis" - the destroyer of the "Rafael Peralta"; Today, the US Navy has 65 of such ships, and even the technological shortcomings of the principle of the Idzhis radar link "AN / SPY-1D - AN / SPG-62" did not prevent the Arly Burke from becoming the main sea enemy for the Russian and Chinese fleets

Ships of this class are really being built at a staggering pace and go off the slipways as “hot pies with baking sheets”, which makes us regard them as the main strategic threat to the ocean and sea theater of war for both the Russian Federation and China at the same time as the pace of American renewal. fleet, no matter how unpleasant it sounds, it's worth learning.

But if the fleet and the Russian Air Force have something to oppose to the most powerful naval personnel of the US Navy in the middle and far sea zones (these are tactical high-precision medium-range bombers Su-34, long-range missile carriers Tu-22M3, and new Tu-160M ​​/ M2 with heavy pendants from hundreds of promising multi-purpose missile launchers and versions of the X-65 anti-ship missiles, as well as the Yasen and Antey missile launchers with the Caliber-PL and Granite anti-ship missiles), the Chinese air forces have nothing of the kind. Delays in developing and optimizing avionics for tactical strike fighters of the 5th generation J-20 also contribute to this, which does not allow the Celestial Empire to control even the middle operational borders of the state. A dangerous "gap" should have been closed as soon as possible, and for the time of shortage aviation The fifth generation of Chinese aerospace leaders still had to turn to the modernization of the project of the Russian high-precision front-line bomber Su-5.

The Chinese ambitious project was started in the middle of the 90s, when the specialists of Shenyang Aircraft Corporation, who saw the Russian T-10В-1 (experienced Su-34) the most advanced attack aircraft complex, started designing a similar machine called J- 17, but as we see today, with some noticeable constructive rework. Initially, J-17 was planned as a worthy replacement for the aging H-6 medium-range bomber, but now, in light of the aggravation of the situation in the Asia-Pacific Region, their importance may reach the importance of the AF-radar transfer program of the AF-JAR and not only. Project J-10 can be a kind of saving option for the Chinese Air Force at the turn of the 17-s. and the most interesting fruit of engineering, which will force to argue more than one generation of military experts and lovers of military aviation.

The official information on the parameters of the avionics and radio-technical equipment of most of the prototypes of Chinese combat aircraft is provided fairly scarce, so it is impossible to accurately characterize their overall combat potential in one mode or another. More or less clear up the picture begins when the first photos of new products get into the network, as was the case with J-15S and J-20. If the future role of the J-20 in the Chinese Air Force is known from the moment of the first flight of the vehicle: low-altitude overcoming or suppression of air defense with further targeted strikes at strategic targets and destruction of AAC / unmanned and manned DRLO aircraft, then the appointment of a deck multipurpose fighter-bomber and interceptor air defense J-15S leads directly to several options, each of which is as close to reality as possible.

First of all, there is almost no potential in solving air-to-surface tasks (a similar drawback can be boasted of serial Su-33, which will soon be upgraded). The fighters are equipped with similar H001 and H001VE radars, which operate in air-to-air mode at the 110-140 km range, which imposes functional limitations on the aircraft compared to even the old F / A-18C “Hornet”, and given significantly a smaller fleet of deck fighters, the aircraft should significantly surpass the American already significantly modernized Super Hornet.

Secondly, the Chinese Su-30MKK and MK2, possessing a similar, not the best, radar H001BE can not provide advantages over the Indian Su-30MKI, equipped with a powerful radar "Bars". And in terms of the contract between the leadership of India and the company "Dassault" for the purchase of 36 fighter "Rafale", the possible risks for the PRC are increasing exponentially. J-15S, being the only two-seater “hybrid” deck modification Su-30MKK / J-15, is able to reduce these risks and win back a share of regional domination from the Hindus and the US Navy.

The J-15S is a double-deck, highly maneuverable multipurpose fighter, equipped with the most sophisticated avionics for conducting the DVB and attacking naval and land targets. The presence of the co-pilot - the system operator, as well as the device for the exchange of tactical information over the radio communication channel in conjunction with high-potential radar with PFAR / AFAR will allow the Chinese carrier-based aircraft to meet modern standards of the developed naval forces without the need to develop the DRLOiU carrier-based aircraft. A large radius of action (over 1500 km), in addition to the powerful radar and co-pilot, will allow Chinese aviation to counter the capabilities of the American decked F-35B / C in a marine theater. Accelerating the modernization of the J-15S will allow you to more quickly improve the equipment already in service with the Su-30MKK / MK2

With J-17, the exact same situation. The first photos of the prototype appeared on November, 1 on the Chinese Internet. This time a very original crossover of the gliders of the Su-34 front-line bomber and the promising X-NUMX-generation T-5 aviation complex was made, which led to fundamental changes in the important parameters of the fighter. Despite the fact that many observers and forum participants have already rushed to count the photo to the product of the graphic installation of Chinese enthusiasts, I would not be in a hurry with the conclusions, because the aerodynamic lines of the fuselage are consistent with the aviation trends of the XXI century.

Before us appears quite a full-fledged analogue of our Su-27IB (Su-34), but differs in the aerodynamic design of the front of the center section. The glider, which has the “free-carrying mid-plane” scheme, which is customary for “Dryers”, is equipped with the so-called mobile inrush part (FPS), which is well known to us in the design of the future low-profile PAK-FA fighter. This form of the swiveling part of the inrush not only allows you to fly at high angles of attack with different mass of weapons and the amount of fuel, but also contributes to a multiple decrease of the radar signature, since the rear edge of the moving plane is completely associated with the wing and does not form an additional EPR.

Another important design feature is the large area and width of these aerodynamic flows. Firstly, it contributes to the overall growth of the fuselage bearing qualities, since, in combination with the CCF, the influx has even a slightly higher area than the PGO of the Su-34, this reduces fuel consumption when flying at medium and high altitudes. Secondly, the huge inclined inrush almost completely overlaps the visible front and side projections of air intakes for airborne airplanes, which conduct patrol mainly from the upper hemisphere (it is quite clear that J-17 is a tactical strike aircraft that will operate at low altitudes), since air intakes J-17 are standard and do not belong to unobtrusive structural elements, the T-50 PAK-FA air intakes are similarly placed, but with a more original slope of edges towards the rear and lower directions relative longitudinal axis of the airframe. 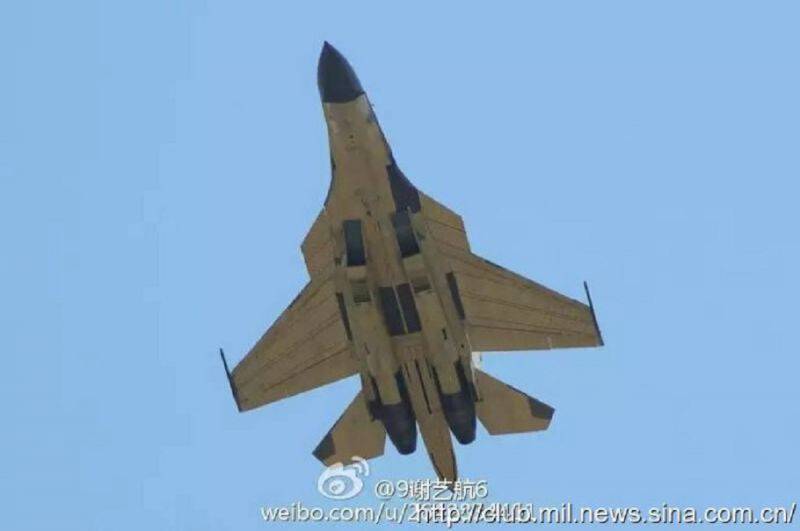 The prototype of the Chinese multifunctional frontline fighter-bomber of the transitional generation J-17 in the air. The use of radio-absorbing and composite materials, as well as the use of oblique airframe elements will allow for a lower radar visibility than that of the Su-34; ESR can range from 1 to 1,5 m 2. The latest pre-production version of the J-17 can get V-shaped vertical tail and altered air intake geometry.

The nose of the fuselage of the J-17, like its Russian standard Su-34, has an increased mid-section of ellipsoid section, designed to accommodate a spacious and comfortable two-seater cabin, where the pilots are side by side, and will be able to perform long air operations without undue stress, as it is done in the "thirty". Theoretically, a promising radar with AFAR can be located in the flattened radome J-17 radar, which should work in both the synthesized aperture mode for sea and ground targets, and in the air-to-air mode, if without the support of such fighters as J-10A or Su-30MKK will have to face the enemy fighters gaining air superiority. The introduction of the J-17 LPI (Low-Probability Intercept) on-board radar is also not excluded, where airspace scanning is performed in a special low-power, low-noise, noise-less radio channel, thanks to which the possibility of identifying the LPI-radar carrier aircraft is reduced by warning systems for irradiating the enemy insignificant indicators. There is authoritative information that the Chinese corporation CASIC implemented the LPI mode in the MRLS with PFAR HT-233, which is part of the long-range anti-aircraft missile system HQ-9 (FD-2000) - analogue of C-300PMU-2 / Patriot PAC-2.

Photographs provided on the Internet raise a number of questions regarding the radar signature of the new front-line bomber. J-17 is sealed in flight from the surface, i.e. from the lower hemisphere, and therefore it is impossible to know exactly the geometry of the cockpit canopy, the angle of the bulkheads and other design features that strongly affect this most important tactical and technical indicator.

On one of the Chinese sites, the technical drawing of the J-17 aircraft is also shown, where the “strategic appearance” of the cockpit windows is clearly visible: the block of windows is more placed to the front hemisphere review and is a single-tiered design, while the lower edge of the windows gives a good view of the side and bottom hemispheres, an overview of the upper hemisphere is limited. This fact also indicates the striking purpose of the promising Chinese "tactic". 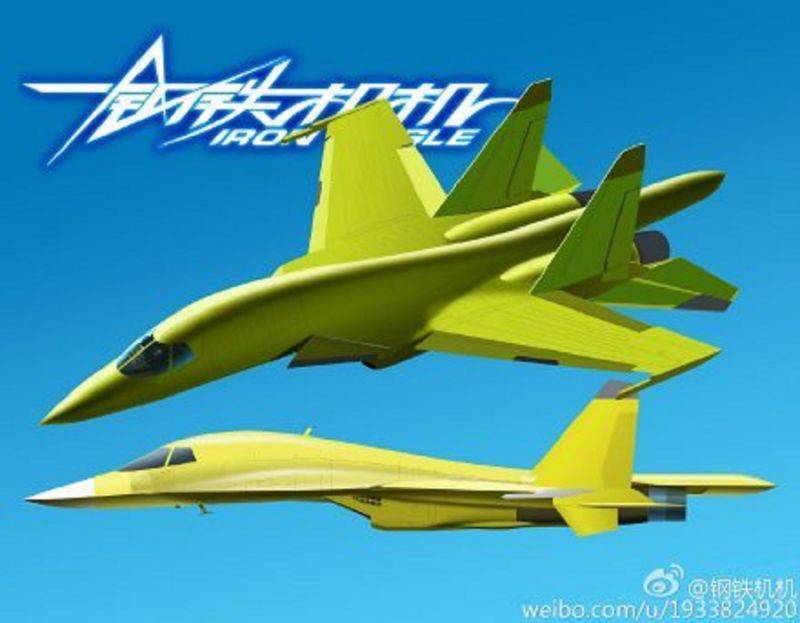 Technical image of J-17 from the Chinese Internet. The nose of the fuselage and the cockpit clearly demonstrate the maximum technical proximity to the 5 generation aircraft

The delay in the start of mass production of the inconspicuous J-20 strike fighter, associated with the long-term development of on-board network-centric electronics, radar with AFAR, and high LTX more aerodynamically "problematic" 5 generation aircraft, forced the Chinese aircraft industry to again turn to improving more proven and proven in battles and exercises of Russian multi-purpose fighters of the transitional generation of the Su-27 family.

Ctrl Enter
Noticed oshЫbku Highlight text and press. Ctrl + Enter
We are
J-20A in the tasks of expelling the “backbone” of the US Navy from the western part of the APRAn-12 in Afghanistan
Military Reviewin Yandex News
Military Reviewin Google News
27 comments
Information
Dear reader, to leave comments on the publication, you must sign in.