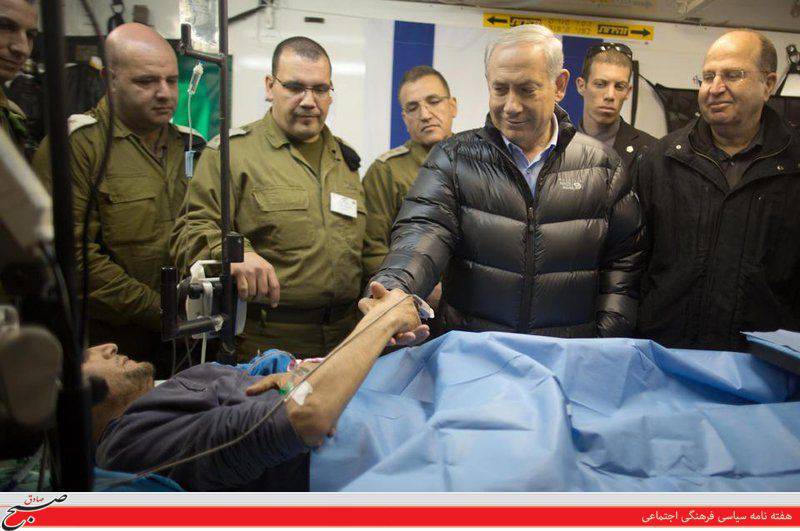 What had previously been issued as a "conspiracy theory," in fact turned out to be true. As part of the conspiracy of the West against the Syrian state, Israel, starting in 2011, provided military and material and technical assistance to al-Qaeda in Syria.

Photographs by Israeli Prime Minister Benjamin Netanyahu in the media with a wounded Syrian rebel in an Israeli military hospital in the Golan Heights prompted such authoritative international publications as The Wall Street Journal, The Times of Israel and The Daily Beast to conduct their own investigation.

Why did such a high-ranking Israeli official, who had repeatedly called on the world community to fight against Islamic terrorists from Hamas and Iran, shake hands with the “Islamic militant” who wants to wipe Israel off the face of the earth?

It should be noted that the UN Disengagement Observer Force (UNDOF) of the Syrian and Israeli forces repeatedly reported Israeli military contacts with fighters from the Front al-Nusra, which is closely linked to Al-Qaida.

As a Druze activist Ahmad al-Maqat told Facebook, who spent 27 years in an Israeli prison and was arrested again in 2014 for anti-Israeli activities, Tel Aviv is implementing a new policy of so-called “peaceful coexistence”. Within the framework of this program, in the Golan Heights, near the Israeli military base, there is a training camp for “alka'idists.

The Israeli authorities deny this and declare that they provide only “humanitarian aid” to people affected by the hostilities. You are amazed at the cynicism of the Israeli regime, which in practice carries out the ruthless genocide of unarmed Palestinians, including children. Israel is the only country bordering Syria that refuses to accept Syrian refugees.

Has Israel forgotten that al-Qaeda has carried out terrorist acts in the United States, Europe and other countries that killed thousands of people?

Or maybe, as stated by former Israeli military intelligence chief Amos Yadlin (Amos Yadlin), within the framework of friendly relations, jihadists provide certain "strategic services" to Israel? Yadlin does not want to admit the possibility of weapons mass destruction by jihadists.

At the same time, Israel is actively engaged in introducing pro-Israel Palestinian agents into the ranks of jihadists, using them as cannon fodder to achieve their interests.

The goal does not always justify the means

Former Israeli Prime Minister Ariel Sharon has repeatedly stated that "Israel must wipe out Gaza, as the Americans did with Hiroshima." Sharon is personally responsible for the massacre in the Palestinian refugee camps of Sabra and Shatila on the outskirts of Beirut. He preferred to have the rapists and murderers from the Islamic state on the border with Israel, rather than pro-Iranian Hezbollah.

Doesn't this look like what we call “fishing in muddy water”?

Jihadists, none other than the instigators of war, it was with their filing that the flames of war raged in Gaza, Iraq, Afghanistan, Libya, Yemen. They are a threat to Russia. Israel seeks to extend its influence from the Euphrates to the Nile.

Possessing a significant military-political potential, does Israel make a mistake when it relies on bin Laden’s students in its strategy?

During the war in Iraq, Donald Rumsfeld created a special group P2OG, whose responsibilities included organizing a series of terrorist acts in order to justify Washington’s activities in the Middle East. It is possible that the P2OG group was involved in the seizure of the Catholic Church of the Blessed Virgin Mary of the Advocate (Saidat al-Nejat) in Baghdad in 2010 year. Al-Qaida claimed responsibility for the attack, and 60 people died as a result of the militant attack.

- The annexation of the Syrian Golan Heights, rich in water sources and the implementation of control over the water resources of neighboring countries. It should be noted that the Tigris and Euphrates rivers in Iraq and Syria are under the control of jihadists. According to the Yeor plan, developed in 1974, it is planned to cut off the access of water from the Nile River to the Gaza Strip.

According to another plan developed after the Israeli invasion of Lebanon in 1982 and called Oranim, it is planned to create a so-called “hydraulic safety zone” to control Lebanon’s water resources. It should be noted that NATO also considered similar plans in 2011.

- The destruction of the "axis of resistance: Iran - Syria - Iraq - Hezbollah" ".

- Turning the “axis of resistance” into tiny ethnic and religious enclaves that would not be able to withstand Israeli hegemony, which is fully consistent with the “plan B” for American President Obama for Syria.

Israel and the Russian military presence in Syria

Considering that Israel’s strategic goals on the Syrian direction do not include the overthrow of Bashar al-Assad, and the disintegration of the country, it is likely that Tel Aviv will be able to agree with Moscow on the division of spheres of influence, in exchange for maintaining the Tartus naval base after Syria , in the territory controlled by Alawite. Strengthening Russia's military presence in the Middle East will force the US to step up military aid to moderate opposition and lead to the establishment of a no-fly zone from the border with Turkey to the Golan Heights. This will be a preliminary step towards the "balkanization" of the region.

The air operation of the Russian Air Force forces jihadists to retreat in the direction of Iraq and Turkey. This leads to instability in these countries, which is in Israel’s favor.

Russia, leading the "pro-Assadavian coalition" and using military tactics developed in Tehran, significantly strengthened the position of the Syrian president.

Tel Aviv understands that the Iranian and Lebanese forces in these conditions will not take hostile actions against Israel until the conflict in Syria ends.

Moscow for many years supported the US sanctions against Iran, which has one of the largest gas reserves in the world. It is quite obvious that Moscow will try to prevent the construction of gas pipelines Iran-Iraq-Syria, as well as Qatar-Saudi Arabia-Iraq-Syria.

Strangely enough, but it turns out that Netanyahu has a much better relationship with “friend Putin” than with Barack Obama. The fact is that the lifting of US sanctions increases Iran’s international weight to the detriment of Israel and Saudi Arabia.

For the first time since the collapse of the USSR, we are witnessing a rapprochement between Russia and Iraq. This is beneficial for Israel and Saudi Arabia, as in this case it is to the detriment of Iran, as well as the United States. The Syrian events completely unleashed the hands of the Israelis, who stepped up the fight against the Palestinians, and the issue of creating two states receded into the background.

Before the start of Russian military intervention in Syria for Tel Aviv, the best scenario for the development of events was to “freeze” the conflict for many years, and thus switch the attention of Arab countries from Israel to Damascus.

This is exactly what happened during the war between Iraq and Iran (1980-1988) when the “Double Deterrence” plan, developed by Henry Kissinger, was implemented. The main goal of the plan was to prevent war in the economic, political, social and military development of Iran and Iraq, which eventually turned out to be. Now we are seeing Iraq returning to the Stone Age, and Iran is gradually being drawn into the Syrian war.

The words of the former chairman of the US defense policy committee Richard Perle, who said back in 1996, said “Israel in close cooperation with Turkey and Jordan should weaken Syria and also remove Saddam Hussein from Iraq”, were prophetic.

Now we are witnessing how slowly but surely the disintegration of Syria and Iraq is going on, not only as states, but also as nations.

Israel benefits from any, even the most negative development of the situation, such as the complete disintegration of the country and the disintegration of society. Israel is always a winner, whether it is the transformation of Syria into a confessional state, implying the organization of state power in accordance with the division of society into religious communities, like Lebanon, or the establishment of the Islamic state in Syria. This is always better than having a strong neighbor next to you.

Syrians have become the second nation in the world in terms of the number of refugees, after all the forgotten Palestinian refugees. It happened by chance or not, but Palestine and Syria border Israel.

A small Jewish state can become a superpower if there are three elements: territory, oil, and water. All these elements are in neighboring countries.

It may be considered that this is an “ideological plot”, but it turns out that Israel can achieve its hegemonic goals only if it leaves only scorched earth on its way.

Now Israel, along with Saudi Arabia and Turkey, is driving the last nail into the coffin of the Obama doctrine, based on the containment of China. The world's greatest powers, including Iran, clung to the fray in order to show their strength in the Middle East. Meanwhile, China is quietly watching the great powers plunge into the “Syrian swamp”.

The ultra-right forces in Israel live in a world of illusions, trying to wipe out their enemies from the face of the earth, but at the same time they ignore the dialectic, forgetting the theory of communicating vessels in such a troubled region.

Ctrl Enter
Noticed oshЫbku Highlight text and press. Ctrl + Enter
We are
Ukraine in US plans directed against Russia ("Publico.es", Spain)Results of the week. "The truth can not be insulted"
Military Reviewin Yandex News
Military Reviewin Google News
467 comments
Information
Dear reader, to leave comments on the publication, you must sign in.