Winchester, which did not become "Kalashnikov" (part of 2)

November 10 2015
21
One of the most regrettable features of our unique civilization is that we are still discovering the truths that have become beaten in other countries and even among nations that are much more backward than us.
P.I. Chaadayev

So, it is obvious that it was Winchester's carbine (we will call it that way without any clarification), well, let's say, the same 1866 model of the year was first-rate and fast-fire. weapons. The latter figure for that time was particularly impressive. With 12 cartridges in the store and 13 in the barrel, he gave 25 rounds per minute. The 1873,1886 and 1894 models were just as quick-firing. And although they were not intended for use as military weapons, since they were designed for low-power cartridges of the 11,8 caliber and 11,43-mm, they were often used precisely in this capacity. For example, the Turkish cavalry armed themselves with the winchesters during the Russian-Turkish war, where they showed themselves from the best side.

It should be noted here that the specificity of the horse service in the USA (the presence of prairies and Indians) led to the great popularity of the carbine. So, even before the beginning of the Civil War of the North and South, the US cavalry used Smith rifles of the .52 caliber (13,2-mm), Starr of the .54 caliber (13,7-mm), and Joslin of the .52 caliber, Maynard, Hankins and Sharpe (Sharpe, not Sharps!) In .50 caliber (12,7-mm). And there were still “Gallagher”, “Ballard”, “Wesson”, “Spencer” and “Barnside”. And the same "Spencer" was purchased 94000, and Barnside carbines (.54 caliber) - 55000!

The carabiner of Gallager.

Well, let alone the rate of their creators increased in various ways. For example, in Sharpe’s infantry rifle and Carabiner mod. 1848, the shutter was operated using a clevis arm, while moving it forward, it went down, opening the breech breech. A paper cartridge was inserted there, then the shutter was raised and ... with its sharp edge, cut off the bottom of it. It was necessary to put a cap on the seed rod, cock the trigger, and it was possible to shoot! Convenient, do not say anything! And do not put the butt on the ground for loading and ram ram the bullet with a charge. And he weighed only 3,5 kg, which was convenient for the rider. 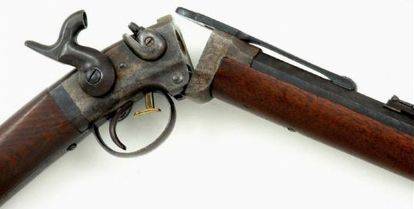 But General Ambrose Barnside came up with more interesting. In his carbine mod. 1856 of the year with the help of the bracket arm from the trunk was disconnected and lowered by the channel upwards the entire charging chamber. A bullet forward in relation to the barrel (!) Was inserted into it a cartridge of its own conical shape, tapering to the rear! When the bolt returned to its original place, the bullet entered the barrel with its head, and part of the sleeve blocked the place of their connection. The sleeve itself was made of brass. Bullet - lead, salted. The highlight of the design was a tapered recess in the bottom of the sleeve. 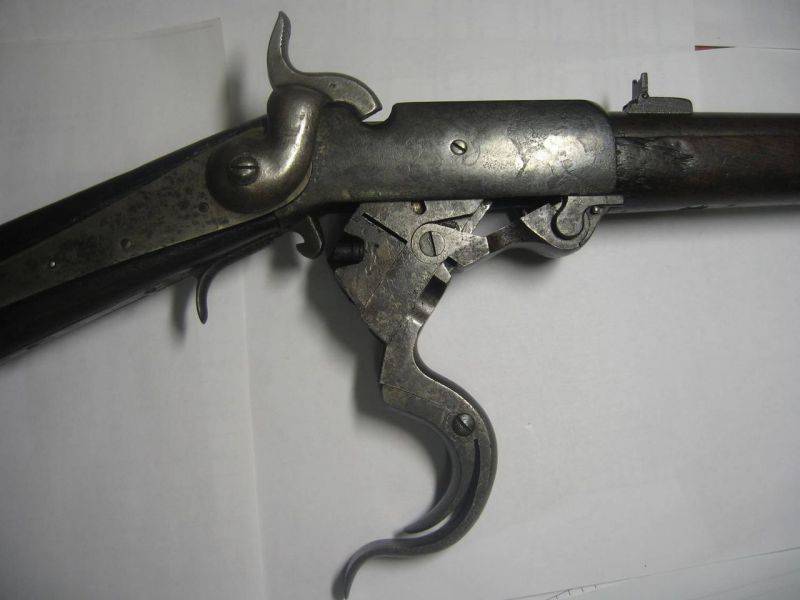 Barnside carabiner. The shutter is open. 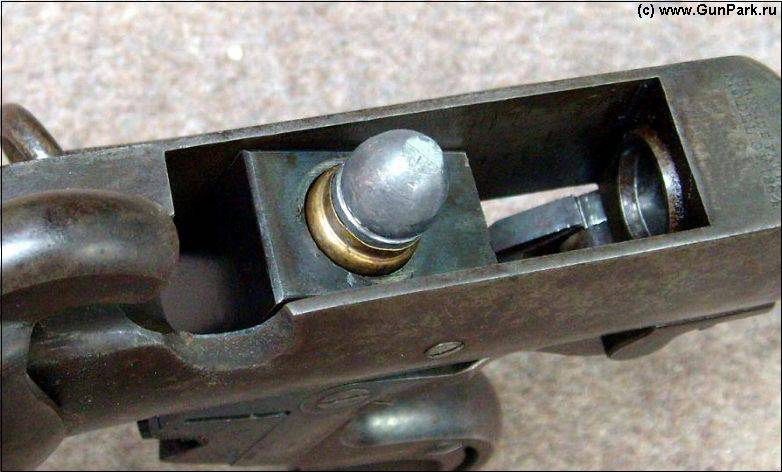 Barnside carabiner. The cartridge in the chamber. 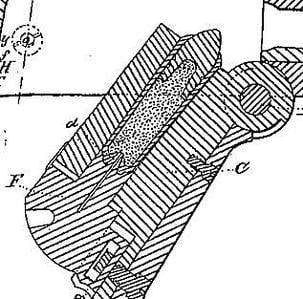 Carabiner Bansayda. Diagram of the chamber with a cartridge inside.

Judging by the scheme, there was a hole, and it had to be filled with wax. Photos of the hole is not visible. But then it turns out that the metal there was very thin. When the trigger smashed the cap, the gases from the cap either knocked out a wax plug, or made a hole in this recess through which the charge ignited in the sleeve. But then, under the pressure of gases, the edges of this hole converged, and ... the gases could not break back! After the shot, the sleeve was removed manually. The effective range of the Barnside carbine reached 200 yards, and the speed of the bullet - 950 feet per second. The total length of all models of carbines was 56 inches, weight - 9 pounds.

It is clear that these were transitional systems with cartridges not yet aligned with the primer, but they clearly show the course of design ideas and the use of the lever combined with the trigger trigger to control the shutter. And the goal is the same - to increase the rate of fire of weapons!

Sometimes it led to quite original, and even frankly curious constructions, such as Needham's English drum rifle, which had a tubular subbarrelled store and, in addition, a drum that was turned with the help of the same bracket arm. That is, the cartridges from the store came first to the drum, and on the trigger he had a special “beater” of the spent cartridges, which removed them alternately from the cameras simultaneously with the shot. The sleeve had a conical shape and was already in the breech. Therefore, she easily entered the drum and was also thrown out of it. Charged into this 12 rifle of cartridges, that is, it was the most multiply-charged drum rifle in the world (not counting Lefoshe's carbines, of course, but they were charged with hairpin cartridges).

Another development on the way to rapid-fire and multi-shot weapons was the dentist's rifle Warren Evans with a magazine in the stock like an Archimedean screw. The shutter in it was also controlled by a lever-clamp, but, depending on the modification, it contained from 24 to 36 rounds of a revolver type. In 1868, he received a patent for the design of the rifle, and in 1871 for the bolt, which simultaneously recharged it and rotated the store. Already in 1873, Warren and his brother George arranged the release of their "miracle weapon" (and by that time it was, because its rate of fire reached 30-36 rounds per minute!) At the agricultural equipment factory, and, despite the modest conditions , soon released more than 12 thousand of these rifles. The Evans rifles were bought by the US Navy, and with a ship bought in America, they also came to Russia. Rifles began to be sold around the world, and in Russia the sample entered service with the imperial fleet in the form of a carbine with a bayonet mount on the barrel and under the .44R cartridge, but this success created completely unnecessary competition to Oliver Winchester. He bought their company from his brothers and ... buried it, and put all their patents on his desk! Interestingly, the magazine was equipped through a hole in the butt, closed with a sliding lid. That is, it didn’t require any “serious operations”, but the time - to get each cartridge out of the bandoleer and put it into the store, surely it was necessary not so little! 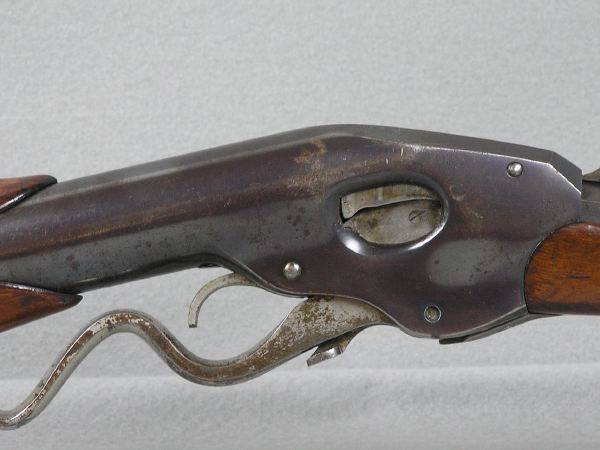 Karabin U. Evans. The hole for the ejection of the sleeves is still open. Later, it was closed with a special lid, similar to a trigger, and opened after each shot. Due to this, the dirt inside almost did not fall!

However, it soon became clear that the rate of fire in hand-loaded rifles, most likely, has already been reached. There was one more circumstance that mattered: it was a long time to charge all these exotic shops! 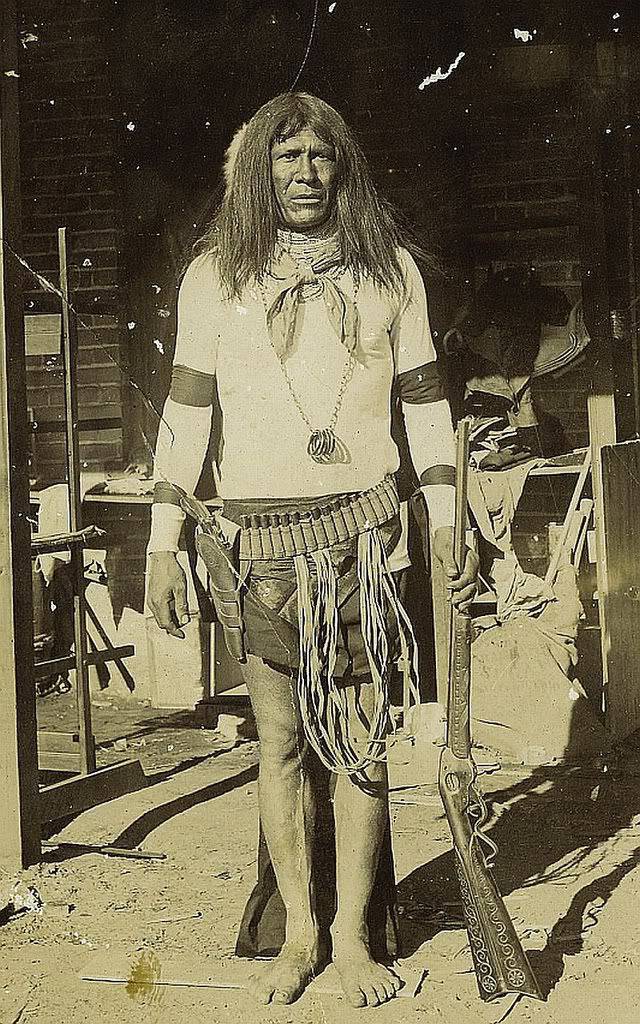 Native American with Evans carbine. And they understood a weapon!

And here the next step towards modern weapons was made again by an American, but of Scottish origin, James Lee. In the 1879 year, just as Winchester did away with the Evans Brothers firm, he proposed a surprisingly simple store in the shape of a rectangular box with a spring, placed on the weapon under the bolt. Here it is hardly worth describing his work, since it is known to everyone. More importantly, he immediately made a lot of time under his shop (and he was detachable, that is, he was saving himself on his reloading!) 6-mm rifle for the US Navy. True, for financial reasons he had to go to the Remington company, but he laid the foundation so solid that his name fell into the name of such two well-known British rifles like Lee-Metford and Lee Enfield: “shop Lee, slicing Metford, Lee's store, slicing Enfield!

The rifle of James Lee “Navy” (naval) is today a very rare specimen. 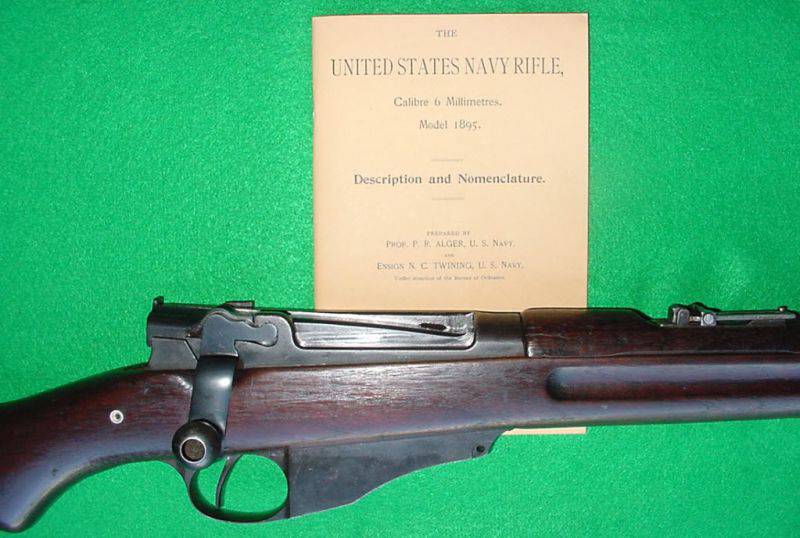 The invention of the store Lee was the beginning of the end of the grenade shops, because in the speed of reloading they could not bear with rifles from his middle shop!
Meanwhile, in less than six years, the Winchester company developed its first carbine with a fixed barrel and automatic reloading of the 7-mm caliber. However, while he was still shooting with black powder cartridges, no one paid any special attention to him: well, another hunting carbine of a well-known company, so what? The situation began to change from 1886, when smokeless powder appeared in France and began its triumphant march across countries and continents. Now it was possible to shoot for a long time and a lot, without fear of smoke around the space around him, and most importantly - powder fire now no longer scored moving parts of the weapon, as before.

Ctrl Enter
Noticed oshЫbku Highlight text and press. Ctrl + Enter
We are
Winchester, which did not become "Kalashnikov" (part of 3)Winchester: shutter and magazine (part of 1)
Military Reviewin Yandex News
Military Reviewin Google News
21 comment
Information
Dear reader, to leave comments on the publication, you must to register.