November 9 2015
13
Over the past few years, domestic defense enterprises and the military regularly showcased the new Kornet-EM anti-tank missile system. This ATGM is a further development of its family of systems and is distinguished by some technical features, as well as related characteristics. In addition, a self-propelled version of the complex, built on the basis of an armored car "Tiger", was developed. Thus, a potential customer can purchase the most convenient and corresponding to its requirements version of the complex.


The Kornet-EM ATGM, also known as the Kornet-D, is a modernized version of the Kornet base system, in which some new ideas and solutions are applied. The development of the complex, as well as the previous systems of the family, was carried out by specialists from the Tula Instrument Design Bureau. A.G. Shipunova. Due to a number of innovations, it was possible to increase the firing range and parameters of hitting the target, as well as introduce some new modes of operation. As a result, the new missiles provide an attack on enemy targets from a distance of 10 km. New warhead missiles will punch up to 1300 mm armor for dynamic protection. There are also some new features.

The Kornet-D / EM complex can be manufactured in two versions. The first, portable-portable, is a logical continuation of previous developments in this area. In this case, all the tools of the complex are mounted on a tripod machine and can be transferred by calculation. In addition, it is envisaged that the complex facilities can be installed on various automobile chassis, which increases its mobility. If necessary, the calculation can dismount and remove your complex from the existing machine. 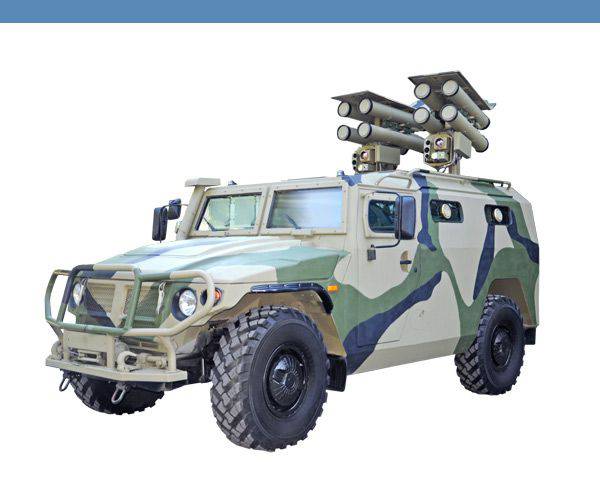 The main element of the portable airborne complex is the launcher, consisting of a machine and sighting equipment. A transport and launch container with a missile of the desired type is installed on it. The equipment of the launcher provides target search, launch of the rocket and its targeting to the selected object. In addition, the Cornet-EM complex includes maintenance facilities and training equipment.

The 9P163М-2 launcher is equipped with a sight-guidance device, with which the operator of the complex must search for targets and then guide the rocket. The installation design allows circular horizontal guidance. Vertical guidance is possible between -5 ° and + 20 °. The optics of the sight has the ability to zoom in with the multiplicity of 12x and 20x. When 12x is increased, the angle of view is 5 °, with 20x - 3 °. If necessary, the sight-guidance device can be equipped with a thermal sight, made as a separate unit.

The launcher assembly weighs 26 kg. The thermal sight adds to the weight of the installation another 8,7 kg. The transport and launch container with a missile weighs 31-33 kg, depending on the type of ammunition. Thus, the dimensions and weight of the elements of the Cornet-EM complex allow them to be transferred by the forces of calculation or transported using different vehicles. 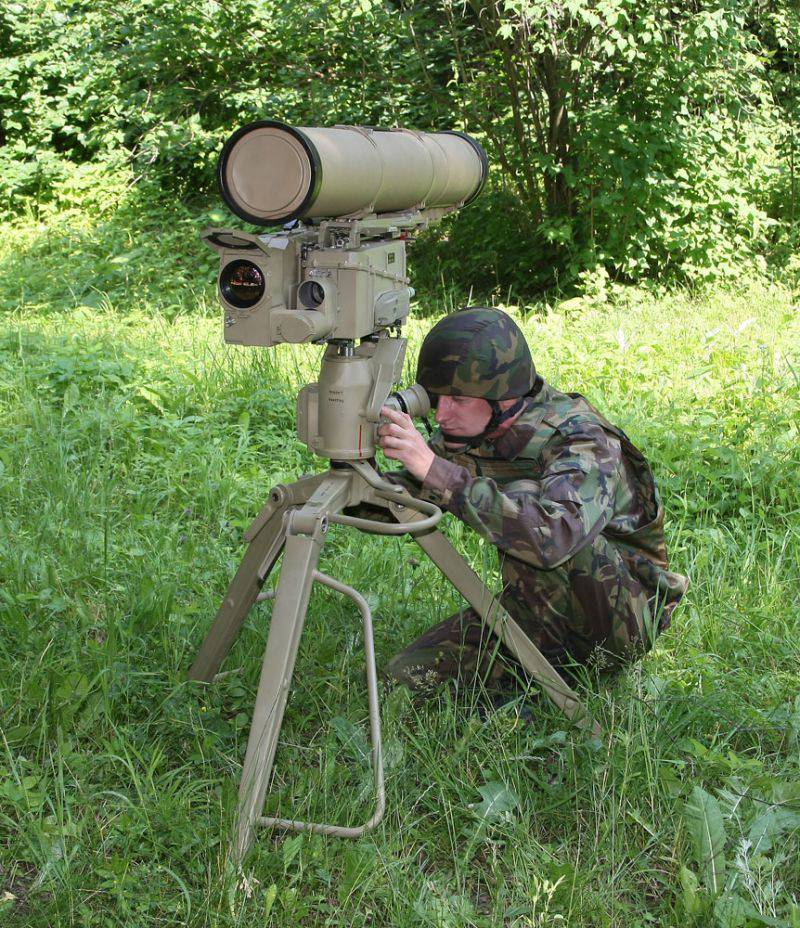 The second variant of the complex is based on a self-propelled chassis. Such a modification of the Cornet-EM system is characterized by a different composition of equipment and large ammunition, ready for use. When building such a complex, an armored vehicle of the type “Tiger” is taken as the basis. In the stern of the hull two automatic launchers of the new model are installed. These units have an original design with their own drives for translation into a combat or marching position. In the stowed position launchers are located inside the body of the armored car, on top of them cover the roof section covers. Before use, launchers should rise above the roof and ensure the launch of rockets.

Automatic launcher self-propelled ATGM "Kornet-D / EM" is a lifting unit with its own guidance devices and fixtures for four containers with missiles. The installation design allows you to perform a turn on the target in a sector of width 180 ° and direct TPK vertically in the range from -5 ° to + 45 °. The launcher is equipped with day and night sighting equipment, as well as a laser rangefinder with the ability to measure distances to 15 km.

Fighting vehicle self-propelled complex "Cornet-EM" is equipped with two launchers weighing 75,2 kg each. On installations there are four sets of mounts for containers of missiles. Thus, without reloading the complex can fire up to eight targets. Another eight TPCs with rockets are transported inside the vehicle's hull. Launchers must be lowered to the stowed position for reloading. It is possible to reset an empty container before cleaning the launcher.

Inside the car, in the front passenger seat, mounted control panel anti-tank complex. The available set of tools allows the operator of the complex to observe the terrain and search for targets with a subsequent attack. Control systems for self-propelled ATGMs have the ability to automatically target missiles at a target. Thanks to this and the presence of two launchers, a complex based on an armored car can simultaneously fire two targets. In this case, two launches are made from different launchers. In addition, a salvo launch of two missiles at the same target is possible, which increases the probability of destroying objects with good protection.

The Kornet-EM anti-tank complex is capable of using all Kornet-E missiles. In this case, its main ammunition are guided missiles of the types 9М133М-2, 9М133ФМ-2 and 9М133ФМ-3. These products differ in some characteristics and types of warheads. Simultaneously, the missiles are unified according to the guidance systems and can be used by the complex without any special training.

Like the "Cornet" of the basic version, the new complex uses a missile pointing at the laser beam. The operator or automatics illuminates the target with a laser, while the rocket, using its guidance systems, is held on the beam and follows the target. This guidance system is already well mastered by industry and troops, and also allows for high efficiency. weapons. Also, the manufacturer notes the high noise immunity of such guidance. The laser receiver is located in the tail of the rocket, which is why the suppression of the control beam is an almost impossible task. 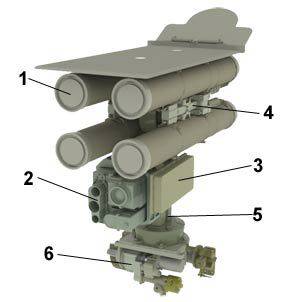 The 9М133М-2 rocket is designed to destroy various types of armored vehicles. It is equipped with a tandem cumulative warhead, with which it can penetrate up to 1100-1300 mm of armor, closed dynamic protection. A solid propellant engine accelerates such a rocket up to speed 310 m / s. Attacking targets in the range of 150 to 8000 m is allowed. The 9М133М-2 product is supplied in a transport and launch container with a length of 1210 mm and a weight of 31 kg.

To expand the combat capabilities of the complex included new missiles with thermobaric and high-explosive warheads. Thus, the 9М133ФМ-2 product is equipped with a thermobaric warhead with a TNT equivalent of TNT. In terms of weight and dimensions, this rocket is no different from anti-tank and has similar flight data. Its speed reaches 10 m / s, firing range - 300-150 m. 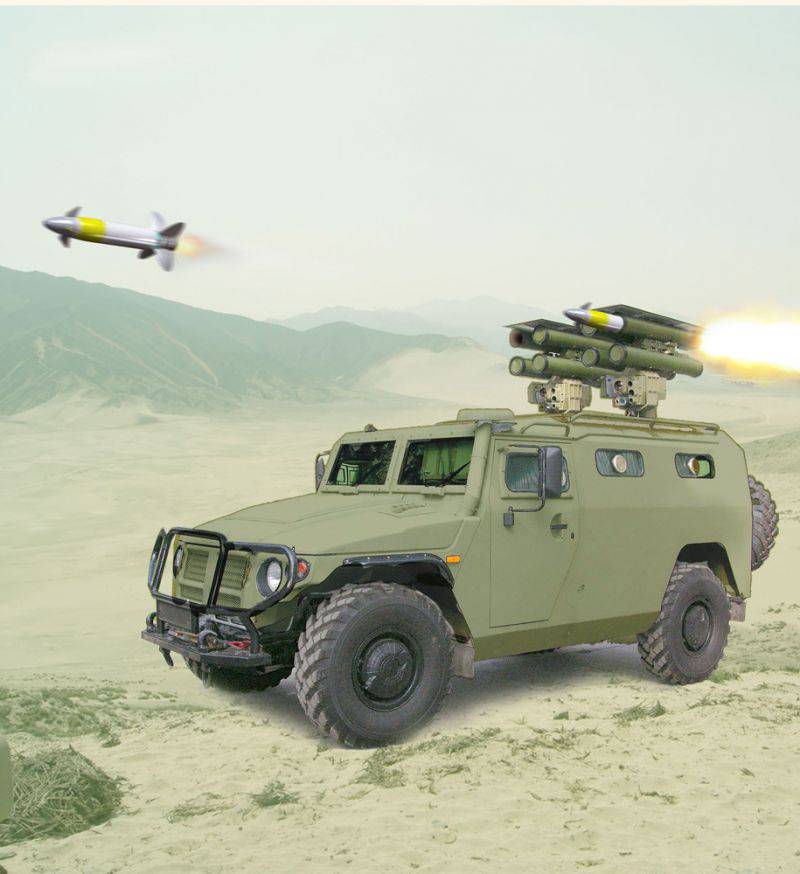 The main objective of the Kornet-EM anti-tank missile system is to destroy armored vehicles and enemy fortifications at a distance of up to 8-10 km. In addition, the possibility of using missiles for other purposes. Thus, shooting at low-flying helicopters, unmanned aerial vehicles and other airborne targets with low airspeed is allowed. In the case of the self-propelled version of the complex, an important innovation is the possibility of simultaneous firing at two targets using both launchers or a salvo launch of two missiles with the guidance of a single laser beam. Under certain circumstances, these modes can facilitate the attack of air targets.

Designed by the developer options launchers provide greater flexibility. Depending on the situation, it is possible to use the portable version of the complex, including the one installed on the vehicle. In addition, there is a self-propelled modification of the complex with a number of characteristic features that increase combat effectiveness.

Since the beginning of the 2000th, the Instrument Design Bureau has been regularly demonstrating the newest Kornet-D / EM ATGM at various exhibitions and showrooms. Special attention of visitors is attracted by the self-propelled version of the complex based on the Tigr armored car. It should be noted, the self-propelled complex is shown not only at exhibitions. So, during the parade dedicated to the 70 anniversary of the victory in the Great Patriotic War, several armored vehicles with guided anti-tank missiles marched across Red Square. During the passage of cars in the parade, launchers were raised in the combat position. 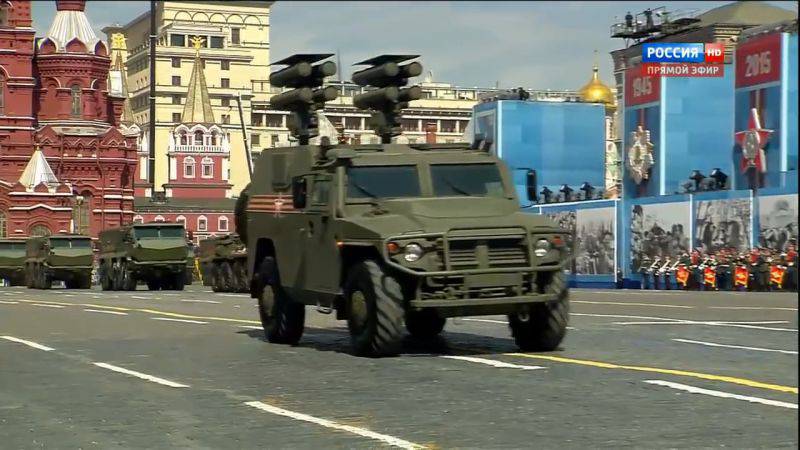 Fighting vehicle "Cornet-EM" at the Parade of Victory, 9 May 2015, the frame from the live broadcast

According to reports, to date, the Kornet-EM anti-tank missile system has been adopted by the Russian army. There is information about the supply of such weapons in the divisions of the ground forces. Both modifications of the complex, portable and self-propelled, are produced and delivered. Such systems can significantly increase the capacity of the relevant units.

In the project of the promising anti-tank missile system "Kornet-D / EM", primarily its self-propelled version, a number of major innovations were used, which allowed to significantly improve the main characteristics. Thus, the maximum range of a missile with a high-explosive warhead brought to 10 km. In addition, there are several important modes of use of weapons that provide a noticeable increase in combat effectiveness. Thus, domestic designers once again managed to create and bring to production a highly efficient sample of guided weapons suitable for solving various combat missions.