November 13 2015
2
For some reason, of all the developments of the company Thiokol Chemical Corporation in the field of personal aircraft, the Jump Belt product has become the most famous. The project "Jumping Belt" remained at the stage of testing the prototype, because it had a lot of flaws. Shortly after the project was discontinued, the company refused to continue research in a promising area. However, the failure of the Jump Belt project could hardly be the only reason for such a decision. Several other projects of similar technology also did not lead to the expected results.


Some time after the start of the development of the Jump Belt system, the design team of Thiokol, or rather of its divisions of Reaction Motors, began to create a new device of a similar purpose. Apparently, Alexander Bor and Harry Berdett Jr. had time to get acquainted with other works in this direction and decided to take into account someone else's experience. The result was the emergence of a vehicle called the Flying Belt, which can be categorized as jetpacks without any reservations.

The idea of ​​a belt with fuel tanks and a pair of nozzles was not justified. Such architecture did not differ in usability, and also could not provide acceptable characteristics. In theory, the project Jump Belt allowed to rise to a height of several meters, run at high speed or perform other "exercises." However, in practice, the operation of this system was associated with a lot of problems. In particular, the rapid consumption of all the compressed gas from the cylinders did not allow for a safe landing after rising to a height of several meters. There were other shortcomings that did not allow the project to exit the preliminary checks. 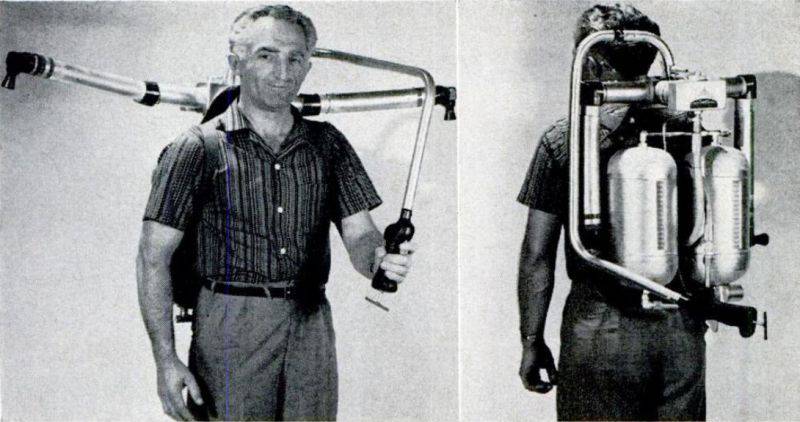 Having studied the problems of their original project, the team of Bor and Berdette decided to turn to the experience of others. For the new project, a more popular layout was chosen, which allowed the use of tanks of sufficient capacity, as well as equipping the device with an acceptable control system. New aircraft decided to build in the knapsack form factor.

For some time, work on the Jump Belt and Flying Belt projects was carried out in parallel. In particular, it was precisely this that enabled Thiokol / Reaction Motors specialists at the end of 1958 to present both samples to Popular Science journalists. In the December issue of the journal a large article was published devoted to the projects of promising personal aircraft. Among others, the article mentioned two projects of Bohr and Burdett.

The Flying Belt was supposed to have a classic layout for such a technique. On the main frame, equipped with straps for mounting on the pilot's back, it was proposed to mount two cylinders for compressed gas or other fuel, as well as a piping system and a controlled nozzle device. With the latter connected lever control, which was proposed to use to change the direction of flight.

Published photos of the Thiokol Flying Belt system make an ambiguous impression. Later devices of similar purpose, which successfully managed to rise into the air, had larger dimensions and differed in a more complex suspension system. Such differences in jetpacks can be attributed to the lack of experience in the development of such equipment, however, other features of the project of Bohr and Berdett can be considered as reasons for its failure.

Behind the main frame of the knapsack secured two cylinders for compressed gas. "Jumping Belt" and "Flying Belt", according to the authors, were supposed to work on compressed nitrogen. This gas was proposed to be pumped into the cylinders on the pilot's back under high pressure. To complete the flight, the valve had to be opened, after which the gas had to burst out through the nozzles and create thrust sufficient to lift the person into the air.

At the top of the main frame, there are fastenings for the nozzle apparatus of the original design. In its center there was a distribution block, made in the form of a rectangular casing connected to pipelines. The task of this unit was to receive compressed gas from cylinders and its distribution between the two pipe nozzles.

Two relatively short tubes were connected to the rectangular casing, at the ends of which there were hinges. On the last set a couple of pipes of sufficient length. At the ends of the second tubes there were nozzles directed downwards. Due to the hinge in the transport position, the nozzle pipes could be folded along the pack. In the working position, the outer tubes were arranged horizontally, at an angle to the vertical plane, and also bent forward to conduct the thrust vector through the center of gravity of the pilot and the knapsack.

A curved control rod was attached to the casing of the switchgear from above. To control the device, it was proposed to use a U-shaped pipe attached with a short end to a distribution unit. At the free end of the pipe there was a handle with a manual valve control cylinders. The design of the control rod was provided with a hinge, with the help of which it could turn back and stow next to the cylinders.

Before using the Flying Belt product, two cylinders should be filled with compressed nitrogen. To start the flight, it was necessary to actuate the valve of the cylinders connected to the handle on the control rod. Breaking out of the nozzles, the compressed gas had to create jet thrust and lift the pilot with the apparatus into the air. With the help of the tilt of the control handle it was possible to change the thrust nozzle vector and fly forward or backward.

In the middle of 1958, specialists at Reaction Motors began assembling an experienced Flying Belt. According to others, these works started at the end of 1957. The manufacture of the prototype was completed by the fall, after which it was ready for testing. Soon began tests prospective system. The test pilot in them was Ray Weech, who took an active part in the development of several aircraft.

The first test flights, more like high jumps, were made in the hangar. For safety, the tester was insured with a tether. Thanks to the latter, the pilot did not risk falling to the ground from a height of several meters if the compressed gas was consumed or the apparatus was misused.

For several weeks, Thiokol / Reaction Motors specialists conducted a large number of short-term test flights. These tests confirmed the fundamental possibility of flight using compressed gas and the efficiency of the proposed control system. However, tests showed a lack of prospects for aircraft operating on compressed gas. Nitrogen under high pressure could create the required craving for a few seconds, which either imposed serious restrictions on the operation of the apparatus, or made it impossible.

The December issue of Popular Science magazine for 1958 for the year claimed that the Flying Belt project had already achieved some success, but was still far enough from mass production and practical use. The aircraft needed some work to be completed in two years. Thus, already by 1961, the team of A. Bohr and H. Berdett-junior could present a full-fledged and ready-to-use sample of a jetpack.

However, this did not happen. Apparently, the chosen “fuel” affected the further fate of the promising development. The Flying Belt project offered to rise into the air with the help of compressed gas energy, but in this case there was an extremely high consumption of nitrogen, due to which the flight duration did not exceed a few seconds. As a result, the proposed device could not be used as a full-fledged vehicle.

Tiokol specialists developed their projects under the Grasshopper program, whose goal was to create a personal aircraft for the army. It was assumed that in case of successful completion of the program, the US armed forces would receive light systems that would allow soldiers to overcome various obstacles, such as high walls or water barriers. In addition, the possibility of short-term low-altitude flight was required. All of this could significantly increase the mobility of infantrymen on the battlefield and, accordingly, increase the combat capability of the troops.

There are no reports of successful completion of the Thiokol Flying Belt project. Probably, in the course of the work, the authors of the project did not manage to bring the characteristics of their jet pack to the required values. The supply of compressed gas remained insufficient to ensure an acceptable flight duration. As a result, the project had to be closed.

In the late fifties and early sixties, Reaction Motors developed several personal aircraft projects, one of which was the Flying Belt jetpack. Due to the wrong choice of the type of power plant, this unit could not get out of the preliminary testing stage. Thus, he repeated the fate of the company's other developments in the field of jetpacks.


Based on:
Based on:
http://theverge.com/
http://rocketbelts.americanrocketman.com/
http://flyingcarsandfoodpills.com/
Montadon M. Jetpack Dreams: One Man's Up and Down (but Mostly Down). Da Capo Press, 2008
Man's First Leap Toward Free Flight. Popular Science. 1958, No.12