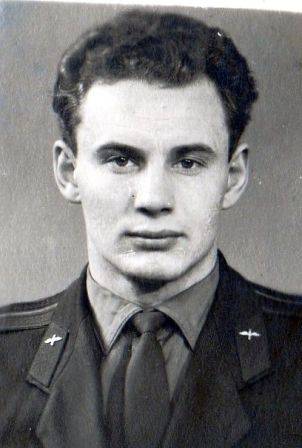 31 August 1971, test pilot and instructor Major V.M. Shapoval led off a burning plane from the village of Khleborobny (Rostov region), saved the life of a cadet by giving him an order to eject. He did not have time to escape and died.


Old-timers remember how 31 August 1971, a jet plane flew in the sky over the village of Khleborobny. He performed the training task. But then the plane suddenly flashed and began to fall. He fell right on schoolchildren. After all, all this happened over the secondary school, where many people had gathered before the beginning of the school year. And on that day, schoolchildren gathered for a volunteer cleanup.

But, fortunately, misfortune did not happen. She was prevented by a test pilot of the Zernograd Flight Regiment, Major Vyacheslav Mikhailovich Shapoval. Saving people, he took the burning plane from the territory of the settlement to the side of the field, where the manned vehicle fell like a stone to the ground and exploded. The pilot died.

I witnessed this terrible tragedy, because at that time I was with the students near the school and saw everything that happened in the sky above the village. I also visited the place where the plane fell - in a field where thick clouds of smoke and flames were visible. I wanted to know more about the hero pilot. And I decided to visit the site of the former Zernograd regiment, which was disbanded after the reforms of the 1992 year. There was a meeting with fellow soldiers Shapoval.

Colonel A.P., Chairman of the Zernograd Public Organization of Military Service Veterans of the Ministry of Defense of the Russian Federation Suslonov; Senior Warrant Officer M.P. Barnabas, previously served aviation technician; Major A.V. Kharkov, stock flight instructor; A. Beznutrov, senior engineer of the aviation service, spoke about Vyacheslav Mikhailovich as follows: “You can talk and write a lot about this person. He left such a bright trace in the memory of relatives and friends. ”

I learned from them the biography of the hero.

Local historians of the Khleborobny rural settlement continue the work begun in 2012 on resurrection from oblivion of the circumstances of the exploit of the test pilot of the Zernograd flight regiment, Major Vyacheslav Mikhailovich Shapoval. Under the Soviet regime, unfortunately, they did not say anything, this feat was silent.

In the 1961 year V.M. Shapoval entered the Kachin Higher Military Aviation Order of Lenin Red Banner School named after A.F. Myasnikova. In 1965, he successfully completed the full course of a military school with a degree in Combat Applications and Aircraft Operation. He was qualified as an engineer pilot. Then in the same school, and then in Yeisk named after V. Komarov, he taught cadets.
V.M. Shapoval as a competent and highly qualified specialist was sent to the newly organized military aviation units to strengthen the flight level and create high discipline. He worked as an instructor in the Eisk Aviation School, in parts of Morozovsk, Taganrog, Bataysk, Zernograd.

From the service description it is clear that Vyacheslav Mikhailovich conscientiously and honestly carried out the duty to the Motherland, possessed high moral and fighting qualities that he instilled in his pupils. This is indicated by his performance characteristics. By order of the Ministry of Defense of December 8 1971, he was awarded the medal "For impeccable service."

From the memoirs of the senior warrant officer M.P. Varnavsky: “Captain Shapoval was often transferred to newly organized aviation units as a competent specialist who was able to strengthen the structure of the flight unit for the benefit of the service. Co-workers respected him. Relationships were clear, shared experiences. At first he lived in Bataysk, went to military service in Zernograd. Then he was given an apartment in Zernograd, but he never had time to move into it with his family ... "

When captain V.M. Shapoval was transferred to service in Bataysk, the regiment had just been organized: there was no infrastructure, they took off from the ground. Then the commander of the Vyatka regiment began to prepare a "fraternal" regiment in Zernograd. Krasnovsky, the chief of staff, colonel Tamplevsky, deputy commander, Major Kulikov, commander of the combatant regiment, Major Bogishlili, regiment engineer and squadron commanders Yakovlev and Demich began to assemble the crew.

And in the spring of 1971, they flew to Zernograd. Created two squadrons of 12 aircraft on the pre-war ground.

Vyacheslav Mikhailovich as a competent specialist was appointed a senior test pilot. ”

The conversation was continued by the senior technician A. Beznutrov: “During the formation of the regiment in Zernograd V.M. Shapoval arrived in part among the first. The family did not relocate, as there was no housing for the pilots. I remember well the tragic incident that occurred at the end of the summer, or rather, 31 August 1971, when he performed a test flight with difficult pilotage with cadet V. Ivanov in zone No. XXUMX. In the descending part of the loop to the passage of the vertical, there was a failure of the machine’s pitch control, that is, the position of the aircraft relative to the horizon. Shapoval tried to bring the plane into positive angles with a trimmer - auxiliary steering on the steering wheel, to relieve the load when performing aerobatic maneuvers. Apparently, at first he did it. Because he ordered the cadet to eject, while he was still on the plane, trying to divert the flight machine from the village. The plane fell outside the village in an inverted position. When they found him, Vyacheslav’s right hand was on the flashlight release lever. The kerosene fumes were condensed, and the kerosene got into the cabin compartment. This aircraft also had a carelessly selected cable harness, which also passed through the cabin compartment. The harness touched the elevator steering. Insulation rubbed in, a spark appeared, and a fire started. On that model L-3A, fire alarm sensors were located only in the engine compartment. The crew learned about the fire only when the elevator control rod burned out. Such conclusions were made by a special commission that conducted an investigation into the causes of the plane crash and the death of the pilot.

"Earth" was answered: "I order! Catapult! Immediately! ”And pause. There was no answer.

Everyone who was in the part at that moment, lowered their heads. Sad foreboding sadness. Everyone understood that trouble had happened. A little later, we were already at the crash site by helicopter.

Test pilot, instructor, then still captain V.M. Shapoval for the technical imperfections of the plane paid off with his life. But he did not lose his head at that terrible moment, he knew that people live below. And prevented a terrible inevitability - giving his life for the lives of people.

After his death, he was given the rank of major.

The manufacturer’s commission has determined the cause of the aircraft fire. Initially, on this model aircraft I-79 was a constructive flaw, there was a closure and ignition of electrical wiring. Subsequently, these defects were eliminated by the manufacturer.

The last revision made a change in the plane after the catastrophe and the death of V.M. Shapoval.

Every year on the day of the pilot's death, his colleagues arrive in the village of Khleborobnoye. So this time, the chairman of the veterans of the Zernograd flight regiment, lieutenant colonel A.P. Suslonov arrived with a group of colleagues. In the laying of flowers to the monument V.M. In addition to the military guests, Shapoval was attended by the head of the Khleborobny rural settlement LA Goncharova, secondary school director L.F. Lastovyriya, honorary citizen of Tselinsky district V.I. Cherkezov.

The participants visited the field where the pilot was killed, talked about his courage.

Also, by the decision of the Assembly of Deputies, held on October 4 2013, Shapoval Vyacheslav Mikhailovich was awarded the title “Honorary Citizen of the Tselinsky District” (posthumously).

In 1977, the Rostov Book Publishing House published a book “In the Eagle's Edge” edited by Hero of the Soviet Union, Honored Military Pilot of the USSR, Lieutenant General Aviation G.R. Pavlova. These are essays about the combat path of our aviation, about heroes. Along with the exploits of the heroic pilots, astronauts, the feat of the test pilot of the Zernograd regiment V.M. Shapoval. Khleborobny High School was named after him, but now for some reason there is another sign on it.

It is necessary to return to school the name of the hero-pilot. Yes, and an outdated monument to our rescuer long time to replace it with the best. It would have been possible to install a memorial plaque at the entrance to the school so that the students would remember about the hero pilot and his feat ...

This event is vividly remembered by many local residents, it remains to perpetuate the memory of test-pilot V.M. Shapoval is officially, at least after 44, from the day he committed the feat.