November 9 2015
29
One of the main directions of development of the domestic armed forces is the creation of new electronic warfare systems. Such equipment makes it possible to impede or make impossible the work of various enemy systems, such as communications equipment or radar detection stations. Disabling enemy detection and communication equipment gives troops a certain advantage, which can be used to effectively solve existing problems.


In recent years, a large number of various systems of electronic reconnaissance and electronic warfare have been adopted for armament of various types of armed forces. A new equipment of this purpose is installed on ships and airplanes, as well as performed in the form of self-propelled land complexes. All this makes it possible to effectively solve a number of problems of suppressing communication channels, countering detection tools, etc.

The main manufacturer of EW systems in our country is the Concern "Radioelectronic Technologies" (KRET). The various organizations that are part of the Concern regularly report on the creation, commencement of mass production or the delivery of the latest electronic warfare systems and other equipment to the troops. All this is a good reason for the joy of fellow citizens. At the same time, foreign specialists and the military are trying to predict what will happen next and how the latest Russian systems can affect a hypothetical armed conflict. 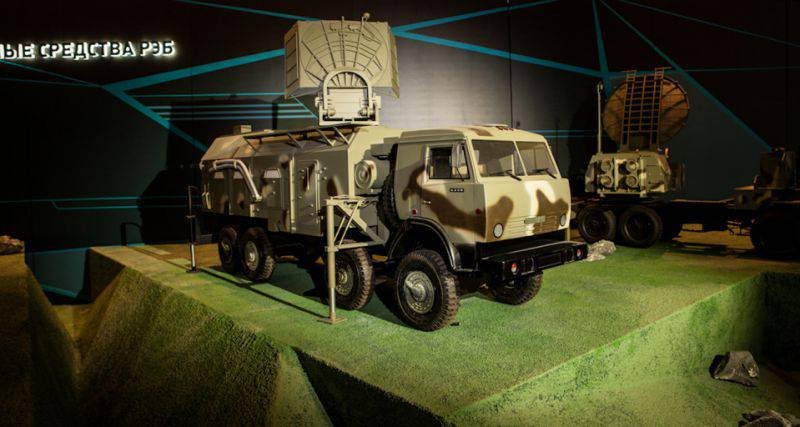 Back in August of this year, Defense News published several interesting statements by American military leaders, as well as retired generals. In the context of the war in Ukraine, in which, according to the official American version, the Russian armed forces are involved, several statements were made that affect the development of Russian EW facilities. The generals quoted by Defense News are prone to good estimates of Russian success.

The commander of the NATO ground forces in Europe, Lieutenant General Ben Hodges, noted that the Ukrainian conflict helps the Alliance’s military collect information on the latest Russian systems. The general said that the Ukrainian military can teach a lot to their American counterparts. So, the US military never came under fire from Russian artillery and did not come across Russian EW systems. Ukrainians, in turn, have this experience and can share it with NATO experts.

Thus, with the help of the Ukrainian military, American experts will learn about the Russian electronic warfare systems, as well as receive information about the characteristics, range, tactics of use, etc. It should be noted, B. Hodges and earlier touched upon the topic of Russian EW facilities. Previously, he argued that they are very painful for the enemy.

Defense News also published the opinion of Lori Bakhut, the former head of the EW US Army service. This specialist called the main problem of American troops. He believes that it is directly connected with the recent armed conflicts: the American army had not fought for decades in the conditions of the use of communication suppression by the enemy. As a result, the armed forces do not know how to work in such conditions. There is no tactics to act in such situations, in addition, no one prepares to work when the enemy uses EW systems.

L. Bakhut also recognizes that Russia surpasses the United States in the capabilities of electronic warfare. The former head of the EW service notes that the United States has advanced intelligence and can listen to anything. Nevertheless, the Americans do not have even a tenth of the Russian capabilities for disabling equipment. According to the expert, EW products are highly effective, but they are also a “non-kinetic form of attack”. Such an impact is harder to watch, and it is unlikely to be perceived as an open attack.

In late October, General Frank Gorenk, the US Air Force Commander in Europe, touched upon the topic of Russian EW assets. He believes that the Russian military was able to close an important breach, which is why American opportunities began to melt. In addition, Russia’s new opportunities in the A2 / AD (Anti-access / Area-denial) strategy are a cause for concern. This strategy implies preventing adversary troops from entering its territory or reducing its capabilities during a breakthrough.

Rossiyskaya Gazeta cites the commentary of KRET Director General Nikolai Kolesov on Gorenko’s statements. He argues that Russia is not engaged in plugging gaps. On the contrary, our country is returning to the positions left earlier. EW facilities are one of the main components of the A2 / AD concept when it comes to armed conflict with an adversary that relies on air superiority, precision weapons and intelligence data. According to N. Kolesov, the EW can knock such trumps out of the hands of the enemy, disrupting the so-called power projection.

Also at the end of October, RIA News published a few interesting statements by the General Designer and Deputy General Director of KRET on EW and Innovations Yuri Maevsky. The Concern's General Designer touched upon the subject of further development of domestic electronic warfare systems. As follows from the words of a specialist, the Russian industry has big plans for this.

According to Mayevsky, the United States is deploying missile defense facilities in Europe as part of the implementation of the so-called. rapid global strike, the purpose of which is the destruction of Russian intercontinental ballistic missiles of various types on the flight trajectory. Such threats require an appropriate response. In particular, the possible appearance of solutions "lying in the EW plane." Such questions are already being worked out by the specialists of Concern "Radio-electronic technologies".

Y. Mayevsky also said that work is already underway on EW systems designed to counter enemy unmanned systems. There are already prototypes of similar equipment. Details of these projects have not yet been disclosed, but it can be assumed that they are based on the idea of ​​suppressing UAV communication channels, after which he will not be able to effectively carry out the task.

Another promising area is the creation of a new generation of electronic warfare helicopter systems. In the field of electronic warfare, new technologies are being introduced, such as digital electronics, microelectronics, broadband phased antenna arrays, etc., which allows you to accordingly update systems of various classes, including those intended for installation on aviation technique. According to Yu. Maevsky, KRET is currently working on a plan to create helicopter complexes for aviation defense. The general designer of the Concern is optimistic about the future and does not doubt the successful completion of the work.

In early November, Y. Mayevsky revealed new details of the work of the EW. KRET has chosen a new strategy for the development of radio intelligence and electronic warfare. All such tools will now be developed on the basis of uniform hardware solutions. Such unification, through the use of uniform modules, will reduce the development time, as well as simplify and reduce the cost of manufacturing products. In addition, some gains are expected in weight, size and power consumption.

Regular reports on the development, commissioning and supply of electronic warfare systems are cause for optimism, as well as pride in the domestic industry. In addition, they provide an occasion for curious statements made by the current and former commanders of foreign armies. Statements of such specialists are of particular interest, since they can reveal the concerns of foreign countries related to the latest Russian projects.

Only in the last few days a number of news about current and future developments in the field of EW has appeared. Concern "Radio-electronic technologies" is developing new aviation systems of electronic warfare, means of countering drones, etc. In addition, the possibility of creating means to suppress some elements of the Euro-Atlantic anti-missile defense system is not excluded.

Thus, there is every reason to believe that the troops in the future will receive new EW assets, and the situation in the media sphere, in general, will remain without major changes. Domestic industry will report on their successes, the armed forces will continue to report on the development of new technology, and foreign generals, as now, will continue to express concern related to Russian innovations. In the meantime, the potential of radio intelligence and electronic warfare units will grow, increasing the overall capabilities of the armed forces as a whole.