November 7 2015
72
20 years ago - the Day of Military Glory of Russia appeared in the calendar of holidays and anniversaries in 1995, associated with the military parade held on November 7 on 1941 on Red Square in Moscow. The official name of the date is as follows:


The Day of Military Glory of Russia is the Day of the military parade on Red Square in Moscow to commemorate the twenty-fourth anniversary of the Great October Socialist Revolution (1941 year).

In fact, the name of the holiday itself is already unique, especially considering the year when the name was approved in the bureaucratic offices of the new “democratic” Russia. This is an era of the 90s, similar to that which is observed today in one of the neighboring states, the era of “desovetization” and “decommunization”. And just then, which is worthy of special respect, in the name of the holiday it was still possible to focus on which one historical the event served as the impetus for one of the main military parades of the Great Patriotic War era. 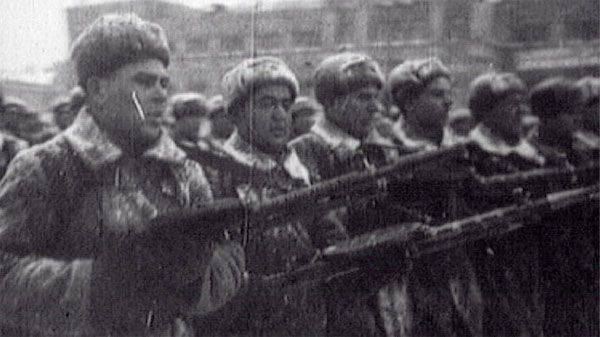 7 November 1941. This is a special date in the history of our country. It’s special, if only because an order is given to hold a military parade at a time when the country, it would seem, was not at all ready for the parades when the Nazi army was on the outskirts of Moscow and was ready to deliver the last crushing blow to the heart of Russia.

However, the decision of the state leadership was fateful. On Red Square, shelves passed, which were literally sent to the front lines to defend Moscow and inflict the first defeat in the history of the war for the army of Nazi Germany, which called itself invincible.

From the speech of Stalin, delivered to the defenders of Moscow:

Comrades, Red Army men and Red Navy men, commanders and political workers, partisans and partisans! The whole world is looking at you as a force capable of destroying the robber hordes of German invaders! All the nations of Europe, who have temporarily fallen under the yoke of German tyranny, look at you as their liberators! The great mission of liberation fell to your lot. Be worthy of this mission!

And they were worthy. They, sacrificing themselves, fulfilled their duty to the end, stopping the advance of the Hitler machine, and already then - at the end of 1941 of the year - dispelling the myth of the invincibility of the enemy, marching through Europe with bravura marches.

Robert Christmas:
Remember!
Centuries later,
after years, -
remember!
About those,
who will not come
never
remember!

Do not Cry!
In the throat
keep your moans,
bitter groans.
Memory
the fallen
be
worthy!
Forever
worthy! 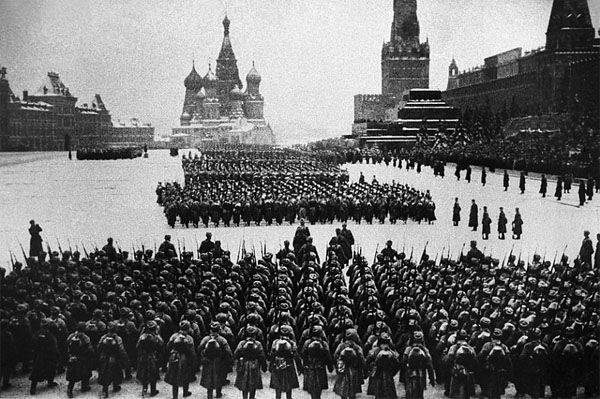 This is also about those who laid down their heads near Moscow. About those who went into battle with the enemy, without wondering whether expediency or inexpediency is a question that often arises today on a dubious type of air, when the “experts” discuss the issue with a smart look, but not whether the parade was aimed solely at preserving the “image” "(What a word ...) the first persons of the state. At the same time, such “experts” did not get acquainted with the opinion of the participants of that parade, did not bother to study the memories of the participants of the battle for Moscow at least in the reading mode diagonally. What for? The main thing is self-praise, and the historical context is not for them ...

One of the participants in that fateful military parade is Sergey Alexandrovich Davydov (Serpukhov). Sergey Alexandrovich, like any person who knows firsthand what war is, didn’t particularly like to spread not the theme of his participation in the November 7 parade of 1941 of the year. But in December, 1981, the newspaper Kommunist published material in which it was told how an ordinary convoy driver had once traveled a gigantic way, driving the war roads from Moscow to Berlin behind the wheel. From the 34-year-old publication (noteworthy that it was not written by a professional journalist, but by S.Davydov, deputy head of the convoy No.1790 of Serpukhov L.Tarasov, and therefore excludes any hypothetical journalistic embellishment “for the sake of the word” ”by definition ):

From the Red Square began the glorious path of Davydov, which ended at the walls of the defeated Berlin. Behind the wheel of the indispensable hard worker ZIS-5 during the war years, he traveled many thousands of kilometers. And what just was not on this difficult and dangerous path. The car not once got under bombing, artillery shelling, burned, sank at crossings. Despite all this, she turned out to be a true friend to Sergei, helping out in the most difficult situations (...) Sergey Aleksandrovich was awarded many government awards for excellent military operations. All of them are carefully kept by him, recalling the terrible military days, the ordeal that befell our people. 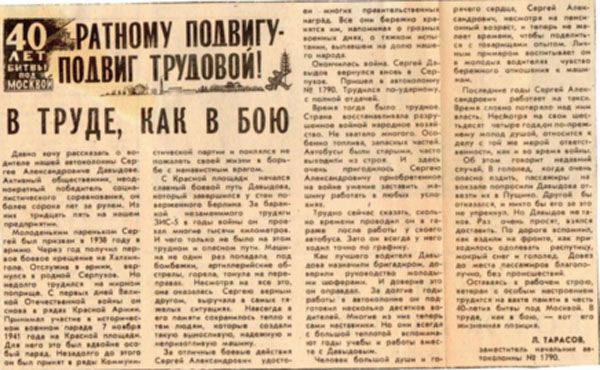 Was there, if one can put it that way, the pretentious parade of the 7 sample of November 1941 of the year? The only pathos, perhaps, lies in Stalin’s attempt to recall the connection between the times: the victories of Alexander Nevsky, Dmitry Donskoy, Alexander Suvorov. But is it pathos? In fact, this is a call to historical roots, to what is commonly called the historical memory of a nation. If in the genes of the Russian (in the widest sense of the word) people is a victory over the enemy, then why not appeal to these genes?

And the appeal took place. The same Sergey Davydov and thousands more, like him, simple Soviet citizens, did everything that depended on them so that the famous “The enemy will be defeated! Victory will be ours! ”Was embodied in objective reality.

Ctrl Enter
Noticed oshЫbku Highlight text and press. Ctrl + Enter
We are
Parade of military gloryDay of Military Glory of Russia - the day the counter offensive began in the Battle of Moscow
Military Reviewin Yandex News
Military Reviewin Google News
72 comments
Information
Dear reader, to leave comments on the publication, you must sign in.