Oman for "special" relations with Iran 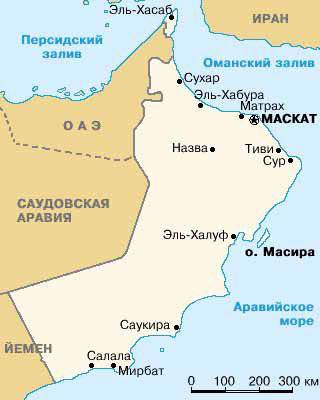 The Cooperation Council for the Arab States of the Gulf (GCC), despite a clear trend towards integration, with the dominance of Saudi Arabia, and now Qatar is still not a homogeneous organization. In this respect, the example of the Sultanate of Oman is indicative.

This absolute monarchy is located in the southeast of the Arabian Peninsula, bordered by Yemen, Saudi Arabia. The territory is washed by the waters of the Arabian Sea and the Gulf of Oman. The population is quite small - 3 million people, including 0,6 million foreigners (according to 2010 of the year). Almost 80% are Arabs, some have a Negroid impurity. The state religion is Ibadism, which is different from both Sunni and Shi'ism. The followers of Ibadism consider themselves to be “true Muslims” and stand out with fanaticism and intolerance towards the Gentiles. The Sultan of Oman is not only the head of state, but also the spiritual head of the Ibadites - the imam.

The basis of the economy - oil production, in addition, the country sells metals, fish, fruits and vegetables. Since the proven reserves of “black gold” tend to decrease, the Omani authorities are working to reorient the economy towards the extraction of natural gas, the development of the metallurgical industry and the tourism sector. The country buys industrial equipment, vehicles, food and consumer goods.

The Sultanate has a special relationship with the de facto official enemy of the GCC, Iran. The rapprochement of Oman with the Islamic Republic is due to a number of reasons. First, it should be noted the geographical position of the two Islamic countries that control the so-called. "Oil gates" of the Persian Gulf - exit from the Strait of Hormuz. These are zones of strategic interests not only of Tehran and Muscat, but also of many other powers. Through this strait passes, according to various estimates, from one third to 40% of the transportation of the planet's oil.

Secondly, Oman wants to preserve a certain independence (in many respects this is determined by the course of Islam, which prevails there) from Riyadh. And Iran is perfect for this purpose, the two countries do not have serious contradictions. Oman does not have a large Shiite community that could destabilize the situation and spoil relations between the two countries. In 2009, Sultan Qaboos visited Iran, showing the importance of relations with the Islamic Republic for Muscat.

Thirdly, it was Iran that at one time provided military support to Sultan Qaboos I bin Said when an anti-monarchist uprising was going on there (1965 — 1976). The “Front for the Liberation of Dhofar” (FOD) led an armed struggle in the southern Omani province of Dhofar to create an independent state. The Iranian Shah sent a punitive corps (more than 1972 thousand soldiers) and representatives of the Ministry of State Security (SAWAK) to Oman to suppress the uprising in Oman. It should be noted that then Iran acted in alliance with the United States and Britain.

Currently, Tehran and Muscat are planning to revive military cooperation. Plans are being developed for military exercises that are directed against a third country. Apparently, this is Yemen, given the difficult situation in this Arab country. The revolution in Yemen can cause unrest in the Sultanate, especially in Dhofar.

Fourth, Oman and Iran have good trade, economic ties, common projects for the development of hydrocarbon deposits. So, at the end of September 2011 appeared newsthat the Iranian authorities plan to begin exporting natural gas to Oman and India via an undersea pipeline. A representative of the National Iranian Oil and Gas Company Hossein Bidarmazh said that the Indian side is ready to lay a gas pipeline on the seabed to the fields of the Islamic Republic. The same gas pipeline is going to be connected with Oman. The Iranian side has pledged to supply natural gas to Omani enterprises that produce liquefied gas. According to publicly available information, the pipeline is going to be laid from the South Pars field, which is located in the Persian Gulf, in the territorial waters of Iran and Qatar. According to the International Energy Agency, South Pars blue fuel reserves are estimated at 50,97 trillion cubic meters. m. in the deposits themselves plus about 50 billion bbl. condensate.

The fact that various Iranian companies operate in Oman is also taken into account, the trade turnover between the countries is constantly growing. Iran is important to Muscat as a possible transit country for goods from Central Asian states.

In addition, we must not forget the fact that Iran and Oman have more than a thousand years история Ongoing interaction, the Omani territory was several times a part of the Persian state.