Who and when will finish the Karabakh mugham to the end 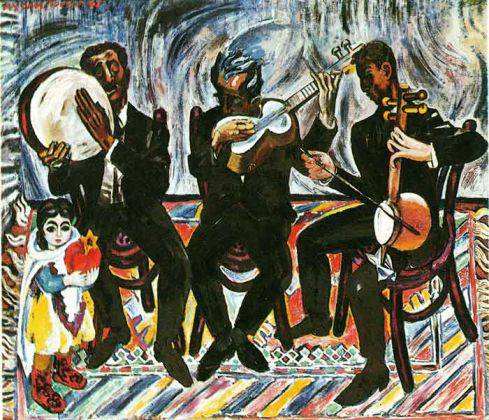 The current attempts to resolve the Karabakh conflict more and more resemble the lingering mugham performed by virtuosos who have the ability to perform the same test differently in the most varied versions, but certainly within the canonical framework. The OSCE Minsk Group (OSCE MG), consisting of three co-chairs - Pierre Andrieu (France), Igor Popov (Russia) and James Warlick (USA), who conducts the main negotiation process and at a high level between the parties, reminds of a trio of Sazander, one of who acts as a singer-vocalist.

In this role, as a rule, Warlick, who has vast experience in mediating diplomatic work on the development and signing of an agreement between Afghanistan and Pakistan on security, is behind. His appointment in the OSCE Minsk Group was accompanied by a description of the US State Department: “A first-class diplomat who is able to do remarkable work in order to achieve a long-term and lasting peaceful settlement of the Nagorno-Karabakh conflict.” He voiced, more precisely, publicized some of the details of the negotiations that were held mostly in a closed-door mode, carried out stuffing of information of a conceptual nature.

For example, in July 2015, Warlick listed points for a comprehensive settlement of the Nagorno-Karabakh conflict: through negotiations, reach agreement on a number of elements, including the return of territories adjacent to Karabakh, the return of refugees and internally displaced persons to their places of residence, security guarantees, which also implies international forces, as well as status determination through the free will of the population of Nagorno-Karabakh. At the same time, he clarified that “the negotiating parties have not yet reached this stage, where details will be discussed,” but this thesis resulted in a negotiation agenda at the highest level of the Presidents of Azerbaijan and Armenia, Ilham Aliyev and Serzh Sargsyan. That is, the parties are discussing something, but without details, which disrupted some mysterious flair from the negotiation process and gave it some kind of meaningfulness, since the basic basis of the "Warlick points" contained theses of the so-called updated Madrid principles.

The intrigue created was that these points were not publicly presented as the common position of the Minsk Group, but as a voiced point of view of the US government, although it was not disavowed by the other OSCE Minsk Group co-chairs. Everything was like in mugham, when one of the instruments of the ensemble accompanying the singing suddenly becomes separated from the others or imitates segments of the vocal part and only later merges with the others. It is no coincidence that in the elements of the contrasting diplomatic polyphony of the Minsk Group, the conflicting and some other interested parties at first heard only what they wanted to hear.

Baku began to openly declare its dissatisfaction with the “unsuccessful work of the OSCE MG on the settlement of the Nagorno-Karabakh conflict”, and in Yerevan certain forces hinted that “the United States embarked on“ experimental diplomacy ”in Transcaucasia, which aims to involve Russia in military conflicts, and as far as possible from Europe. ” And everything began to converge in this mysterious solitaire, which contained techniques for changing the scenario of further developments in the region through shuffling the deck with building a parallel series of events.

American political scientist Paul Craig Roberts said that Washington, along with the Ukrainian crisis, was considering the scenario of “destabilizing the Asian borders of Russia” in order to “place US military bases directly on the Russian border, as it was done in Poland and the Baltic States”, meaning Azerbaijan . Earlier in the summer of 2014, when the escalation in Karabakh began to grow, a summit of the presidents of Azerbaijan and Armenia, Ilham Aliyev and Serzh Sargsyan, was held in Sochi with the mediation of Russian President Putin. Then the President of Azerbaijan Aliyev said that the Armenian-Azerbaijani conflict is a “mirror reflection” of the Ukrainian crisis. And as the water looked. Then in October 2014, a similar summit, but with the mediation of French President Francois Hollande, was held in Paris.

French diplomacy was forced to reorganize directly “on the move,” since the negotiation process on the Karabakh settlement began to deteriorate towards a change of agenda: you must first stop the armed escalation in the conflict zone, “but adhere to the principle of the right to self-determination in this region”, which can be considered as forerunner of the “Warlick points” in the context of the incorporation of Karabakh into a wider historical and political context, especially after Yerevan’s accession to the Eurasian Economic Union without formal of the separation column with Stepanakert.

That's what's curious. Director of the Baku Center for Political Innovations and Technologies, political scientist Mubariz Ahmedoglu says that “when joining the Eurasian Union, President Sargsyan made a commitment not to consider Nagorno-Karabakh an integral part of Armenia, which was confirmed by a verbal note.” Recall that the note verbale is just “a written diplomatic document, which is a fixed result of oral negotiations, the purpose of which is to set forth issues relating to the subject area of ​​international relations.” Perhaps that is why President Sargsyan stated at a meeting in Yerevan that "Nagorno-Karabakh is an integral part of Armenia." In this regard, many Armenian experts believe that such a statement “should not be taken as a political warning addressed to Baku, but as an unofficial recognition of the status of Nagorno-Karabakh”.

Political analyst and former Azerbaijani diplomat Fikret Sadikhov, with reference to the decision on the creation of the OSCE MG, states that "the parties to the conflict are Armenia and Azerbaijan." According to him, in a certain sense, the co-chairs violate the regulations by holding meetings with the NKR President Bako Sahakyan. But such meetings correspond to reality and the established practice of resolving this type of conflict. By the way, Warlick, like Yerevan, called for the introduction of Stepanakert into the negotiation process, which causes rejection in Baku. Therefore, if Azerbaijan does not wish to conduct a dialogue with its former territory, believing that its fate can be decided only with Yerevan, then the statement of Sargsyan is adequate in terms of first of all identifying real and not artificial possibilities for settlement. Moreover, in other words, the trains of Baku and Yerevan went towards each other on the part of a complete change or modernization of the negotiation agenda for the Karabakh settlement, but with completely opposite initial positions.

“Unfortunately, the statement by the mediators did not respond to this unacceptable and even contradicting the official position of Armenia itself,” Aliyev said in this connection. But why? Warlick noted that “we are faithful to the principle of working on all the important elements of the conflict resolution process for the parties,” while he was expected to give statements in Baku in which “Armenia was exposed as an aggressor country.” In this regard, Baku political scientist Tofig Abbasov began to see "Russia's desire to take the initiative in the Karabakh settlement in their own hands." But there is every reason to believe that if Russia makes any efforts in this direction, it will also be an imitation of the segment of the vocal part in the Karabakh mugham. Therefore, we can agree with the opinion of those experts who believe that "the only effective way to resolve the Karabakh conflict is the agreement of Moscow and Washington at this stage on the prevention of an armed conflict between Baku and Yerevan."

The rest is a diplomatic routine. The Minsk Group has announced that it is preparing a summit of Aliyev - Sargsyan, which is planned to be completed before the end of this year. According to Warlick, "this is one of the main issues of the current visit of intermediaries to the region." However, the already mentioned Baku political scientist Ahmedoglu believes that “the upcoming possible meeting of the presidents of Azerbaijan and Armenia will not do any good for the region and the settlement of the Karabakh conflict, so it is likely that it will not happen in the end,” although the situation in the conflict zone remains tense. In this regard, Armenian Defense Minister Seyran Ohanyan did not rule out that on the eve or after the meeting of the presidents of Armenia and Azerbaijan, the situation will become aggravated again. According to him, "in such cases it is not always, but often there was a tense situation." This can not be ruled out.

In the meantime, the Russian government approved an agreement on the creation, jointly with Armenia, of a unified air defense system in the Caucasus region of collective security. Yerevan is becoming an important and only actor in the Transcaucasus for the unified air defense system, which significantly increases its regional significance, especially given the developments in the Middle East. The German radio station Deutsche Welle suggests that Moscow is not interested in allowing the “warming up” of the Karabakh conflict to “guarantee itself (if such a need arises) Transcaucasian transit to Syria”, which leads to certain reflections on the future of the region as a whole. In particular, the Turkish media, reporting on the intention of South Ossetia "in the near future to hold a" referendum "on the republic’s entry into Russia", do not exclude that such "sentiments may also arise in Karabakh", which, according to political scientist and director of the Center stories Caucasus, Rizvan Huseynov, "is a watchful volcano of the Transcaucasus" and can, as it was earlier at the end of the XNUMXth century, change the geopolitical amplitude of the entire regional pendulum. So the Transcaucasian geopolitical mystery is just beginning, and the Karabakh mugam will sound for a very long time.