November 6 2015
15
The second attempt to carry out the inter-fleet transition is carried out by the diesel-electric submarine of the 636.3 Rostov-on-Don project. We remind that earlier the Rostov-on-Don diesel-electric submarines entered the port of Kronstadt. Initially, the media reported that during the transition were identified technical problems with the electrical installation, but the Defense Ministry denied these statements, saying that the submarine only replenished stocks at the Kronstadt naval base. 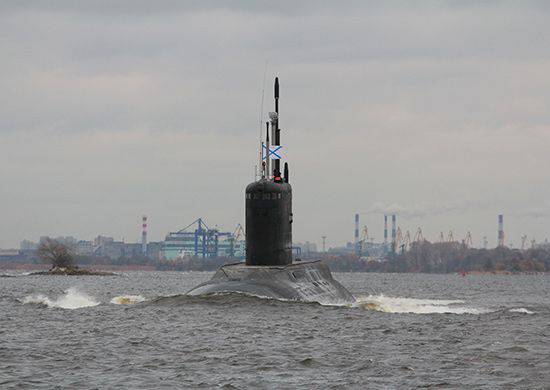 RIA News quotes a representative of the information management of the Russian Defense Ministry on the Navy Igor Dygalo:
In accordance with the inter-naval transition plan, the Rostov-on-Don diesel-electric submarine after testing weapons systems in the North navy made a call to the Kronstadt naval base to replenish all types of reserves to the required standards and continued the transition to the place of permanent deployment on the Black Sea Fleet. It is planned that the Rostov-on-Don diesel-electric submarine will arrive at the Novorossiysk Naval Base by the end of November this year.

It is especially emphasized that all systems of the submarine of the 636.3 "Varshavyanka" project are in good condition.

From the press service of the Navy:
It is planned that the diesel-electric submarine Rostov-on-Don will arrive at the Novorossiysk naval base by the end of November.
The other day the fleet was transferred to the 4-i submarine of the same project - "Krasnodar", built at JSC "Admiralty Shipyards" and launched in April this year.

Ctrl Enter
Noticed oshЫbku Highlight text and press. Ctrl + Enter
We are
The action “Military service under the contract is your choice!” In Rostov-on-Don: future contract servicemen, exhibitions and “Russian Knights”"Admiral of the Fleet of the Soviet Union Gorshkov" of the 22350 project - transition from St. Petersburg to Kronstadt
Military Reviewin Yandex News
Military Reviewin Google News
15 comments
Information
Dear reader, to leave comments on the publication, you must sign in.