Atomomor of Ukraine nears its end 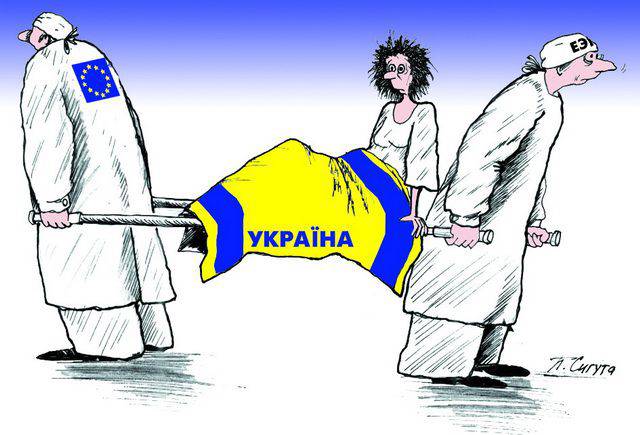 After the coup d'état, one of the first decisions of the Kiev authorities (independent?) Was the return to Ukraine of the infamous American company Westinghouse. According to Y. Prodan, who once called himself Minister of Fuel and Energy of Ukraine, Ukrainian Energoatom intends to sign a contract with Westinghouse for the supply of nuclear fuel to load three power units.


If an unsuccessfully proven company returns, it means that someone needs it. And obviously not Ukraine: the United States is actively working to promote its nuclear fuel and reduce the influence of Russia on the Ukrainian energy market.

From the standpoint of large business, the interest of Western transnational corporations in the Ukrainian nuclear sector is quite understandable. By the number of power reactors, Ukraine ranks tenth in the world and fifth in Europe. Ukraine has 4 nuclear power plants with 15 power units, one of which, Zaporizhzhya NPP, is the largest in Europe. All power units of Ukrainian NPPs are equipped with VVER-type Russian-made reactors. That is, the market for interested players is huge. And, apparently, having tempting prospects.

As part of the current confrontation between Russia and the United States, the West cannot afford such a “domination” of Russia in the energy sector of Ukraine. Even after V.Yushchenko came to power, work began on the transfer of Ukrainian NPPs to fuel produced by the American concern Westinghouse. The experience of using fuel elements TVS-W of an American company at the South-Ukrainian nuclear power plant was unsuccessful. In April, 2012 was detected at the 3-m power unit of the South-Ukrainian NPP. According to the results of the investigation of the Ukrainian commission, a conclusion was drawn about the constructive mistakes of the American fuel cells. Losses "Energoatom" amounted to a minimum of $ 175 million.

Negatively evaluated the experience of cooperation with the Americans and Ukrainian experts. As S. Barbashev, Vice-President of the Ukrainian Nuclear Society, notes: “There were really serious problems, and they showed that the American tapes they made for the South-Ukrainian NPP are very much technically incomplete. They are imperfect and not suitable for our reactors. ” According to V.Nikitin, Chief Engineer of the Ukratomenergobud Company, the choice of Westinghouse as an alternative supplier of nuclear fuel to Ukraine was politically motivated and economically unreasonable: “American fuel is 30% more expensive than Russian fuel”.

Similar problems with the use of Westinghouse fuel arose in other countries. In particular, at the Slovenian NPP "Krško", "Loviisa" in Finland and "Temelin" in the Czech Republic, as a result of which these countries were also forced to refuse the services of an American supplier.

In 2013, all Westinghouse fuel cartridges were completely removed from the second unit of the South-Ukrainian NPP. At the same time, the Minister of Energy and Coal Industry of Ukraine, E. Stavitsky, announced the plans of Russia and Ukraine for the construction of a plant for the production of nuclear fuel in the village. Smolino of Kirovograd region, the first stage of which was supposed to begin its work in 2015. Now let's compare the dates. The decision to completely refuse to cooperate with the Americans in an “amazing” way coincided with the start of the “European integration” coup d'état.

According to a number of experts, the American side currently needs at least four years to carry out the full cycle of testing fuel assemblies of the Westinghouse company in Russian reactors of Ukrainian NPPs. In case of positive results, with 2019, Ukraine will be able to begin the process of a full transition to US nuclear fuel.

In order to form a favorable public opinion during this period and to weaken the position of the opposing specialists, Westinghouse conducts an intensive information campaign to discredit the fuel assemblies (TVS) of the Russian TVEL company. In particular, emerging emergencies using American fuel at Ukrainian NPPs are shifted to Russian equipment, and the flaws of Westinghouse products are presented in the media as a result of the destructive influence of low-quality fuel supplied by Russia to nuclear reactors.
The key media figure in this informational struggle and the lobbyist of US interests is A.Abdulaev, director of the core design center of the Kharkov Physics and Technology Institute. Using his authority in the nuclear community and at the same time heading the direction of the scientific and technical support for the introduction and operation of Westinghouse fuel at Ukrainian NPPs, he systematically forms a pro-American point of view.
According to a number of experts of Energoatom, the anti-Russian statements disseminated by A. Abdulaev in the media are biased and significantly distort the causes of failures in the Westinghouse TVS, which are blunders by American experts in the design and manufacture of nuclear fuel elements.

It would seem, what does the EU have to do with the Ukrainian nuclear power plants and the failures of Westinghouse? But remember the recent events. After the initialling of the Association Agreement between Ukraine and the EU, official Brussels unexpectedly insisted on including Euroatom in the text of the treaty as an independent party. Those. the structural unit of the EU was placed on a par with the EU member states.

In the EU, only a few enterprises fall under the jurisdiction of Euratom: the Franco-German concern Areva NP, the Anglo-Dutch-German company URENCO, which is in the sale stage of the mentioned Areva NP, and the French state-owned company EDF. In turn, Areva NP actively penetrates American manufacturing facilities, becoming one of the largest manufacturers of fuel elements produced under the license of the already mentioned American company Westinghouse. The circle is closed.

How the interests of the largest Western European manufacturers in third countries are realized are clearly seen in the examples of the Ignalina NPP in Lithuania, Kozloduy and Belene in Bulgaria, and Bohunice in Slovakia. The condition for the entry of these countries into the EU was the closure of nuclear power plants that compete with French nuclear scientists. As a result, electricity in Lithuania has doubled in price, heating has quadrupled, and mass protests in Bulgaria, which have arisen after the self-immolation of a person who is unable to pay the bill for electricity, are memorable to everyone.

Ukraine is also being prepared for this scenario. Its implementation, together with the well-known problems with the procurement and transit of Russian gas, is likely to finally plunge this territory into chaos, destroy the already weak remnants of Ukrainian infrastructure.

On the one hand, Western "partners" using the "operetta" regime of Poroshenko impose American nuclear fuel, which will destroy atomic reactors.

On the other hand, in the Association Agreement with the EU, Ukraine’s obligation to ensure equality of domestic and export prices for electricity is clearly spelled out.
That is, by destroying the Ukrainian nuclear power plants, European suppliers will provide themselves with the opportunity to supply electricity to Ukraine at “Paris” prices. They will receive "friends" from the EU and full access to the uranium deposit located in the Dnipropetrovsk and Kirovograd regions.
Recall that a plant for the production of nuclear fuel was built there together with Russia. Which now will not be, and the raw materials extracted in Ukraine will go straight to the EU, returning back to the “Square” in the form of kilowatts at European prices. Indeed, why does Ukraine need its own production?

In this context, we should also recall the Kharkiv Nuclear Center, from which, in 2010, all reserves of highly enriched uranium were removed to the United States, which permanently deprived Ukraine of the opportunity to revive its own nuclear technology development.

The ousting of Russia from the Ukrainian market of nuclear materials poses the country the problem of storing spent nuclear fuel. Russian nuclear fuel for VVER reactors returned to the Russian side. Westinghouse will have to be stored in Ukraine.

In addition to the dubious happiness of having nuclear repositories in a small country, it is also alarming that all cooperation with the EU and the United States in this area, as always, amounts to non-fulfillment of obligations by Western investors. For example, in 2005, the US-British consortium Holtec-BNFL won an international tender for the construction of a centralized storage facility for spent nuclear fuel for the needs of Ukrainian NPPs. Commissioning of the facility was planned for 2015, however, the active stage of construction has not yet begun.

Meanwhile, 2 tons of fuel is still stored in a wet storage facility, which was launched back in 1986. Moreover, spontaneous “dumps” of nuclear waste arose in the Donetsk region in the Doncement plant’s quarry, in the Novoamvrosievskoye mine and mine in the village of Snow. In the Luhansk region geography was even wider. Nuclear waste was buried in the Dolzhanskaya mine, near the village of Sverdlovsk. Chemical slag was poured in Komsomolskaya and Central near the city of Anthracite, as well as Yanovskaya-3 and Shterovskaya under the Red Ray.

According to the former people's deputy of Ukraine V. Kolesnichenko, the goal of American expansion into the Ukrainian market of nuclear materials is “the destruction of nuclear energy in Ukraine. Then Ukraine will buy energy in Europe at completely different prices. Thus, a plan is being implemented to turn Ukraine into a puppet colony. ” Do not see this is impossible.
But the current Kiev authorities are ready to pay this price for the sake of turning Ukraine into an anti-Russian springboard. In 2016, the Ukrainian authorities plan to buy more than 60% of fuel for nuclear power plants from the American Westinghouse. In 2015, procurement of fuel for nuclear power plants was carried out only from a Russian supplier, UNIAN reports. With “I hope that with 2016, we will have five deliveries from 13 on the part of Westinghouse. I think that this will be a very significant step in order to diversify supplies, ”said Volodymyr Demchyshyn, Minister of Energy and Coal Industry of Ukraine. This is despite the fact that earlier Petr Lavrenyuk, senior vice president of the fuel company TVEL of Rosatom State Corporation, said that Russia could start supplying upgraded TVSA-12 fuel to one of Ukraine’s nuclear power plants next year.

Russia is seriously concerned about Ukraine’s desire to use nuclear fuel from the American company Westinghouse at Ukrainian NPPs, as this can lead not only to the loss of a huge market, but most importantly, the destruction of streamlined technological chains in the nuclear industry threatens to create a massive emergency in the center of the European continent. In this case, the activities of Western players and their partners (or rather, puppets) P. Poroshenko and his team, from whose connivance and at whose mercenary interest everything happens, directly threaten the environmental safety of not only Russia but at least the countries of Eastern Europe. The hatred for Russia instilled by Washington so far turns out to be more important than economic expediency, environmental safety. However, these concerns in Ukraine do not matter, because taxpayers' money goes into the pocket of Poroshenko and his sponsors in the United States.

Obviously, the further radioactive insanity of Kiev will not only contribute to a huge increase in social tensions in Ukraine due to the multiple increase in tariffs, but will also be capable of leading to the very real radioactive genocide of Ukrainian citizens. And it will be the real “Atomomor” with millions of real victims.

Ctrl Enter
Noticed oshЫbku Highlight text and press. Ctrl + Enter
We are
Ukraine with the help of the American "Westinghouse" was going to "disperse" the reactors at its nuclear power plants. Experts: "This is Another Chernobyl"Atomic blackmail
Military Reviewin Yandex News
Military Reviewin Google News
95 comments
Information
Dear reader, to leave comments on the publication, you must to register.