Bomb the beast in his lair - so what? 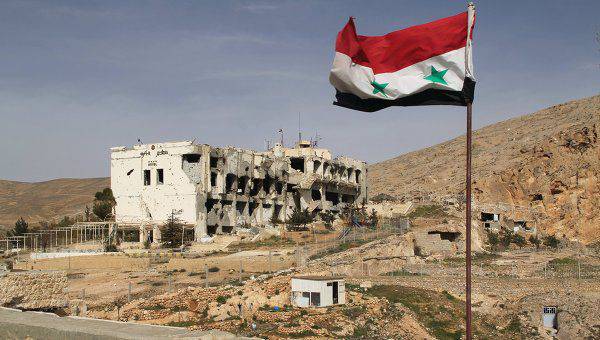 What are the prospects for the Syrian operation of Russia? President Putin has clearly identified two things: Ground forces will not be sent to Syria, and air strikes will continue for the time required for an offensive operation by the Syrian army. Everything is logical: wars are not won by actions aviation. A year ago, I wrote in NG: “Everyone can bomb, and whoever sends Tanks and infantry? ” No one sent. So, the Syrian government army is the decisive factor. What is she like?


The Arab spring in Syria began the same way as elsewhere. The teenagers painted the same words on the walls of the houses: “The people want the regime to fall,” the police dealt with them cruelly, then the protest turned into a riot.

Syria differs from Tunisia, Egypt and Libya in that there were intercommunal contradictions: 70% of the population - Sunnis - tolerated 12% of Alawites - a special sect that once stood out from Shiite Islam. Whether the Alawites can be regarded as Shiites is a moot point, but what matters is that the Sunni majority of Syria considers them to be, and more importantly, the age-old hatred of Shiites, warmed up by the Wahhabi concept that Shiites are even worse than infidels, colors all those with bloody color the actions that al Qaeda immigrants have become famous for in Iraq and Syria. The Alawite minority opposes the Sunni majority; without taking this cardinal circumstance into account, it is impossible to understand why the government army, armed with first-class Russian aircraft, tanks, missiles and guns, has not been able to cope with those whom President Bashar Asad dismissively calls a gang of criminals, mercenaries and terrorists for four years. I had to turn to the help of "big brother".

Of course, not all Sunnis are against the Assad regime, moreover - in his army the soldier’s mass is staffed mainly with Sunni draftees. However, their fighting spirit, apparently, is not very high, especially if they have to deal with fanatic jihadists, for whom great happiness is to die for their faith. But at the same time, we note two points: first, the army had to fight with these fanatics mainly in recent years, when they rushed from Iraq, and in the early years of the war, Assad’s forces were confronted primarily by the Free Syrian Army, which consisted of deserters who fled to Turkey . But it was during this period that most of the territory of Syria was lost, the war flared in the suburbs of Damascus and in the center of the second city of the country - Aleppo. Consequently, the government army was unable to cope even with the troops of those called the moderate secular opposition, despite the overwhelming superiority in armaments. Secondly, those who saw on TV screens Syrian refugees, rushing to Europe, could not help noticing a lot of young men. And although some of them, regardless of religious affiliation, fled, saving their lives, a considerable number of these people clearly sought to avoid being drafted into the army, especially since Assad this year recognized for the first time the lack of manpower.

Such an army (although the Lebanese Hezbollah and Iranian special forces are fighting along with it, but they are not too numerous) will have to complete the work that Russian aircraft began: defeat the forces of Islamist alien terrorists, that is, the IS (banned in Russia ) and "Dzhebhat an-Nusra." But these forces are by no means the main part of the opponents of the Assad regime, and the government army only comes into contact with them at two or three sites, but it is necessary to fight mainly with parts of the Free Syrian Army and other local, Syrian, and moderate forces. Islamist. So far, no serious successes have been heard. It is reported that some localities have been freed (but this is not shown on the maps), that the enemy is running in panic, throwing weapon (but apparently not a single prisoner, otherwise a triumphant noise would have been made). But liberating Syria means defeating all enemies, both real terrorists and the troops of the internal opposition; and it may happen that all the enemies of the regime in the face of such a truly formidable enemy as Russian aviation will stop fighting each other, and the government forces will not be able to beat them one by one. Then the prospect of a long-term positional war, the continuation of the sluggish fighting, which has been characteristic of all recent years, emerges. Free several villages per week? In the meantime, Russian aviation will bomb and bomb, and Russia will continue the operation, which costs, as reported, in 4 million dollars a day?


Take the best option: most of Syria has been liberated. Where will the militants go? They are not such idiots to sit in the desert under the bombs. They may go to Iraq, but this is not an escape, but a displacement. Recall the Taliban and Al-Qaida when the Americans invaded Afghanistan after the September 11 terrorist attack on September 2001; The militants left Kabul and all major cities, moved south to the mountains, to the Pakistan border, sat out, waited, and returned. They moved. In Iraq, seven years ago, when the current IS (then called Al Qaeda in Iraq) was almost broken, the jihadists left for Syria, and last year they moved to Iraq again. They can do it again, and what's left? Since Russian troops are excluded, the Assad army will be able to resist only by calling aviation again from Russia, and everything will resume. Bomb again. How long? And there’s no end in sight, since the Islamists have a powerful rear - Iraq. But there already will require the request of the Baghdad government, and it is unlikely to break with Washington. Yes, even if it went, it could have been even worse for us, because the scale of the war would have greatly expanded, and without the hope that the goal — the destruction of Islamist terrorism — would be achieved.

And to stop the bombing - means to leave the Syrian army to its mercy, while its enemies will increase, not so much the IS, which can be isolated, how "moderate" with the support of Turkey, the Gulf countries and the United States. And the matter can come to a completely pessimistic scenario: the Assad regime, rescued by Putin, sits on his own piece of divided Syria, retains Damascus and Latakia, and at best Aleppo, there is no longer any talk of restoring a single state.

But after all, the official goal of the intervention is to crush the enemy terrorist before he gets to Russia, which is why our people support it. People who are not well versed in geography think that the army of Islamists can somehow penetrate into Russia (via Turkey, Iran? Is absurd!), Or the militants that our aircraft destroy can come to Moscow and make explosions here. For some reason, they do not think that the explosions have happened before - in Moscow, New York, London, etc. - long before the IG appeared, and there were no bombings, and the murderers were somehow leaking. And the question can be posed: and even in the case of the destruction of the IS manpower, will the militant Islamism movement, powerful, dynamic, attractive for hundreds and thousands of young people (far from Arabs), disappear? I'm afraid that is unlikely. Seeds, thrown by bin Laden, have already borne their poisonous fruits. Those fighters who survive after the war, will return to their countries - wounded, embittered, remembering the buried comrades and seeking revenge for them. To whom? Russia’s victorious enemy, because its role in the defeat of the “caliphate” will be decisive, and this role will not be forgiven by the radical Sunni of all countries, who now call the Russian accomplices Shiites, Persians, Americans and Zionists.

Our naive people believe that bombs will destroy precisely those terrorists who could come to us, blow up and kill. Unfortunately, there are many such suicide bombers in the event of a complete collapse of the IG. Including among those who did not go to war in Syria. The overwhelming majority of Russian Muslims are Sunni, and we cannot know how much the propaganda of Islamists will be among them. The first possible threat is terrorist acts. This is of course the worst option. The second is the gradual deterioration of relations between people professing Islam and the rest, first of all Russians. Islamists will portray the victims of Russian air strikes as martyrs, emphasizing their Sunni religion. Propaganda will sound like this: “Muslims have risen, created a caliphate to erase the traces of centuries of humiliation, and who struck in the back? Russia. The Russians led the Shia camp. They are the enemies of Islam. ”

However, a well-established propaganda mechanism will be able to cope with the situation in any case. If terrorist attacks occur, they will explain to the people that this is only an insignificant part of the mass terror campaign that would have unfolded if most of the IS militants had not died under our bombs. If the operation has to be stopped before the destruction of the Islamic State and Assad retains only Damascus and Latakia, it will be possible to make people understand that after all, our support allowed us to avoid the worst - the capture of all of Syria by terrorists. An absolute advantage of the operation will be the creation of a Russian military base in Syria, the exit of our fleet to the Mediterranean Sea, and finally, the most important, most important thing, is what Russia has shown: it is not only not an isolated outcast on the world stage, but a powerful force that can instantly and radically influence the development of events in any corner of the globe.

If we talk about international resonance, then at first glance it may seem that Russia's readiness to destroy such a universal evil, as the global terrorist network, will dramatically increase its reputation. But since militant Islamism is a powerful movement that has deep roots and is speculating on a specific interpretation of the Koran texts, sacred to all Muslims, no planes or bombs can destroy it. Therefore, the Syrian operation of Russia will not give serious advantages. Moreover, it is at this point that the theses of both Western anti-Putin and extremist Muslim propaganda can coincide.

Ctrl Enter
Noticed oshЫbku Highlight text and press. Ctrl + Enter
We are
What you didn't want to know about EnglandInterview by President Bashar Al-Assad to the Sunday Times
Military Reviewin Yandex News
Military Reviewin Google News
200 comments
Information
Dear reader, to leave comments on the publication, you must to register.