November 6 2015
40
At the last international exhibition in Moscow in OctoberWeapon and hunting 2015 ”(ARMS & Hunting 2015 exhibition), a branch of the Tula enterprise KBP JSC (Instrument Design Bureau), TsKIB SOO bureau presented its new high-precision rifle MC-561. This rifle is a variant of the MTs-116M sniper rifle, specially adapted for the civilian small arms market. The MTs-561 hunting carbine with a telescopic sight was presented at the TsKIB stand, the rifle was developed for the popular domestic cartridge 7,62x54R (barrel length - 650 mm, weight - 6,5 kg).


The exhibition “Weapons and Hunting 2015” this year was held in the territory of Gostiny Dvor in Moscow at the very beginning of October. This exhibition for domestic lovers of small arms and hunting, perhaps, is the most interesting. From the very first exhibitions not only native Tula and Udmurt gunsmiths, but also representatives of foreign companies take part in them, which only stirs interest in exhibitions and attracts visitors from all over Russia.

It is worth noting that the rifle MC-561 demonstrated at the TsKIB stand was positioned as a hunting carbine, but de facto it may be of interest not only for Russian hunters, but also for shooters-athletes, as well as various Russian power structures. The classification of weapons in this way was required due to the peculiarities of the domestic weapons legislation. In general, the 561 MC model is a further development of the well-known sniper rifle MC-116М caliber 7,62х54R (designed by Denisov V.N., Eliseev N.I., Sleptsov A.D.), which was adopted in 1997 year. In small quantities, this rifle is used in the Ministry of Internal Affairs, the Federal Security Service and the Federal Security Service of the Russian Federation. 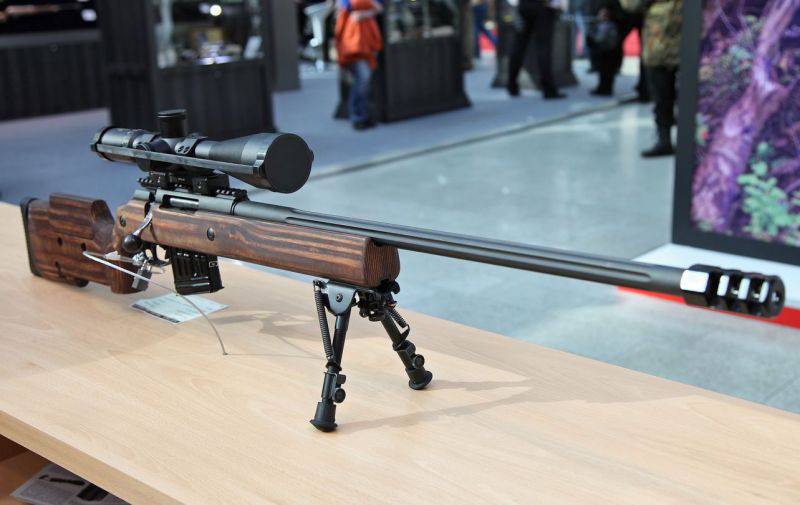 The MC-116M rifle was created on the basis of a high-class sport rifle, which allowed it to hit targets with a single shot with the highest level of accuracy during counterterrorism and police operations. According to the manufacturer, the rifle was distinguished by the possibility of adaptation to the shooter and the task to be performed, which was carried out by adjusting a number of parameters. In particular, the rifle trigger had a wide range of adjustments for the stroke length and the trigger position, the nature and the trigger pull. The button-type rifle fuse could be turned on or off without changing the finish. In the design of the MT-116M rifle box, it was possible to change the length of the butt, the height of the head of the sight, the height of the crest of the cheek and their position in the horizontal plane. In the lower part of the rifle butt was made retractable support. Movable along the forearm and height-adjustable bipod during transportation could be folded.

The rifle's mechanical sight consisted of folding pillars for firing 100 and 300 meters, as well as a front sight, which was mounted on a rifle in addition to the main telescopic sight. On the upper plane of the receiver is set Picatinny rail, designed for mounting a telescopic day or night vision. An anti-scattering device is located above the barrel, and a slit flame arrester is attached to the muzzle.

It is worth noting that this rifle is being exported and has already managed to get “baptism of fire” during the fighting in Syria. At the same time, the civil roots of the MC-116M go to the single-shot large-caliber rifle MC-116, which was intended for firing at a distance of up to 300 meters at fixed targets in the shooting range. And the MT-116 rifle itself was a modified version of the very successful MT-13 rifle designed by I. M. Mikhalev. It was designed on the basis of a Mosin-designed rifle and was produced in the Soviet Union starting in the 1952 year. Thus, the MC-561 rifle shown in Moscow has an excellent “pedigree”, in fact it is the “great-granddaughter” of the legendary Russian three-line Mosin rifle of the 1891 model of the year.

An interesting fact is that in 1980-90-ies the MC-13 rifles, which were equipped with optical sights (for example, the PSO-1 sight with the Dragunov sniper rifle) and a slightly modified bed, were used by a number of special forces as sniper weapons . True, this measure was forced, since at that time precision-guided tactical rifles were practically absent in the Soviet Union.

As the profile information portal All4shooters.com notes, the rifle MC-561 outwardly makes a very pleasant impression. This high-precision rifle captivates with its good workmanship and embodies the majority of modern developments and world trends in the field of creating such small arms. The rifle has a hung heavy match barrel, the length of which is 650 mm. The barrel has longitudinal grooves and is equipped with a highly efficient three-row muzzle brake. The rifle uses a longitudinally sliding bolt, locked by turning.

The rifle presented at the Moscow exhibition was intended for the popular Russian cartridge caliber 7,62x54R. But in the future it is planned to start the release of the MC-561 for different types of cartridges. Together with the rifle, 6B1 box magazines designed for 5 or 10 cartridges are used. These stores were borrowed from the Dragunov sniper rifle (SVD). A single rifle stock with an adjustable cheek and a rubber butt pad to reduce recoil when fired can be plastic or wooden. A characteristic external difference between the new rifle and the early MT-116M is the absence of cutouts on the forearm, which has a positive effect on the strength of the structure. The rifle mounted telescopic height-adjustable bipod type Harris. Mechanical sighting devices, unlike MC-116M, are not provided. The total length of the carbine is - 1250 mm, weight - 6,5 kg.

The MT-561 rifle is expected to go on sale in the 2016 year. The release of this rifle can be called a good sign for all Russian fans of high-precision weapons and high-precision shooting, since we can finally talk about the emergence of real competition in this segment. The presence of three Russian companies in this segment - serious players of ORSIS, TsKIB SOO and the Kalashnikov Concern - allows us to hope for the end of monopoly prices and the beginning of a real struggle of all players for the maximum quality of products and the development of after-sales consumer service.