November 6 2015
41
Izhevsk Mechanical Plant, part of the Kalashnikov concern, presented its novelty at the Moscow international exhibition ARMS & Hunting 2015, which took place in Gostiny Dvor. This is an additional module that allows you to transform a pistol based on the PM (Makarov pistol) into a kind of compact carbine. The system created in Izhevsk makes it possible to reduce the effect of recoil on the results of shooting, to increase the convenience of holding weaponsand also gives the shooter the opportunity to use with the system a mass of useful additional attachments.


The design of the product presented at the exhibition included seats for the installation of the following additional equipment: a tactical flashlight, sighting devices, holding arms, a laser designator, and so on. The total length of the presented module is 600 mm, adjustment of the shoulder rest is up to 40 mm (adjustment is made without the use of special equipment), height is 210 mm, width is 90 mm. At present, the Federal State Unitary Enterprise Izhevsk Mechanical Plant manufactures weapons under the brand name Baikal, a new development of the enterprise is intended primarily for use with air guns based on PM.

The fact that the novelty is made just under the PM does not cause any particular surprise. In the world, the Makarov pistol is often called the “Russian Walter”. This nickname is undoubtedly a compliment to weapons, since "Walter" has always been considered one of the undisputed leaders in the market for pistols. The Makarov pistol created in the USSR was not inferior to him in anything. As a result, over time, the PM was recognized as one of the best pistols of the last century, along with the same "Walter", "Beretta", Browning and other models. Like the Kalashnikov assault rifle, he managed to become a real legend.

The Makarov pistol was put into service in the 1951 year and is still being produced. It is used in the army and law enforcement. Mass production of the gun was deployed in 1952 year. The undoubted advantages of this weapon include its modest dimensions and weight: the pistol is lighter than the TT on 130 grams (in unloaded form - 0,73 kg, with a full magazine - 0,81 kg). In addition, the gun is constantly ready for use - the weapon is brought to the combat position almost instantly. Some experts even claim that the gun can be carried with a cartridge in the barrel - so PM is safe. The straight grip of this pistol allows you to shoot at a chest target from a distance of up to 15 meters intuitively, ensuring its sure defeat. And at a smaller distance the pistol does not even need to be lifted - the specialist will be able to put all the bullets at the target, even from the hip.

Today, Izhevsk Mechanical Plant produces 8 variants of PM. These are sports-training, sports, signal, service, gas-balloon and traumatic versions of the popular pistol, which has been in service with the army and security forces since 1951. The company from the capital of the Udmurt Republic took a quite logical step by releasing a special additional module for this gun, which easily turns the Makarov pistol into self-loading carbines, which looks like a compact version of an assault rifle or a submachine gun.

In the West, this type of tactical accessory became known as the Pistol to Carbine Conversion Kit (a set for remaking a pistol into a carbine). In the past few years, a similar set of firmly entered the gun fashion. Mainly, at the expense of manufacturers of weapons and tactical accessories from Israel, such as Tactical, CAA, IWI, FAB Defense. Many of the company's employees are former members of the Israel Defense Forces who have direct experience in fighting. For this reason, the allegations that this type of body kit is of little use and is intended only to demonstrate "coolness" should not be taken seriously. Such devices, designed to rework a short-barreled weapon, are also of interest to owners of pneumatics. That is why a number of companies, for example, UMAREX, offers such kits for various replicas of modern combat pistols.

These sets for the transformation of weapons may be particularly interesting in those cases when you need to attach several additional devices to the gun at once, for example, a collimator sight. An ordinary pistol most often has very limited possibilities for mounting such devices, in addition to this, problems with carrying weapons are automatically manifested. The arrow requires a special holster or the possibility of lightning-fast assembly / disassembly of the mounted body kit. At the same time, the gun, converted into a small carbine, immediately removes all the issues, especially in the presence of several Picatinny rail. 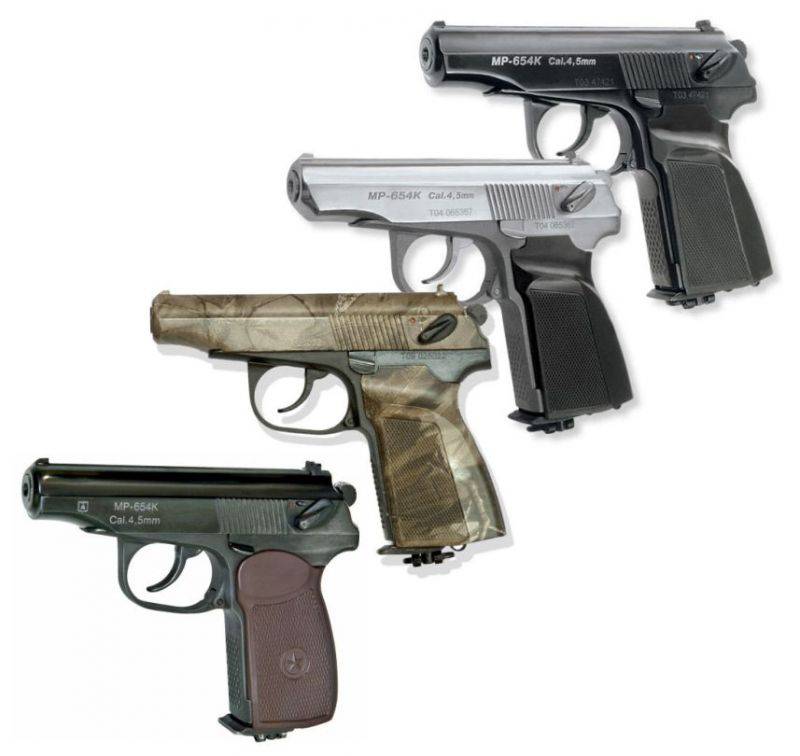 On the presented Izhevsk novelty, there are two such strips at once: a long one located on the upper side of the casing and a short one on the lower side. In the sample presented by the Udmurt enterprise, Picatinny’s mounting rails installed the Grip Pod bipod, which increases the comfort of holding the weapon during firing and makes it possible to give the weapon a stable position when firing from a prone position and a mechanical diopter sight similar to that found on American rifles M16A4.

But that's not all. Stability when shooting increases due to the three-row muzzle compensator located in the upper front part of the false holders and adjustable along the length of the plastic stock. And the increase in the mass of the weapon due to the addition of the mass of the transformation module itself and the equipment mounted on it has a positive effect on the shooting results. This is due to the reduction of the tossing of the weapon and the reduction of the recoil acting on the shooter during firing. The stock can be adjusted in length by 40 mm, this action does not require the arrow to have any tool. The set presented does not have any index or name, the manufacturer only noted that it will be sold under the Baikal trademark, price information is also not yet available.

Such an additional module so far is focused only on owners of pneumatic pistols - replicas of the PM, such as MP-654K, UMAREX PM Ultra, UMAREX Makarov, or Gletcher PM, reports the portal all4shooters.com. Perhaps, in the case of commercial success in the Russian market, in the future we will see similar modules for the MP-655K pistol (a pneumatic clone of the MP-446 Viking, the sports version of the Yarygin army pistol - PJ), and in the case of interest from the military and law enforcement agencies - modules for combat pistols PM and PU. It should be noted that the serial production of pistols PM and its modifications continues at Izhevsk Mechanical Plant. Despite the fact that the Russian army and police are gradually moving from the PM to the Yarygin pistol, the PMM and other models still remain in service and are among the most popular and sought-after samples of short-barreled small arms of Russian production.