Is it possible that TOER threatens the national security of Russia?

November 9 2015
30
The idea of ​​creating TOER (territories of advanced economic development) excites some minds in our country almost from the moment it appeared as an idea. And when the idea was transformed into law, the noise and cry was raised serious. What a sin to conceal, as a person who is not indifferent to the future of Russia, I also paid attention to this idea. Today I am glad that I did without cries on the topic “Russia was sold to the Chinese” and the like. 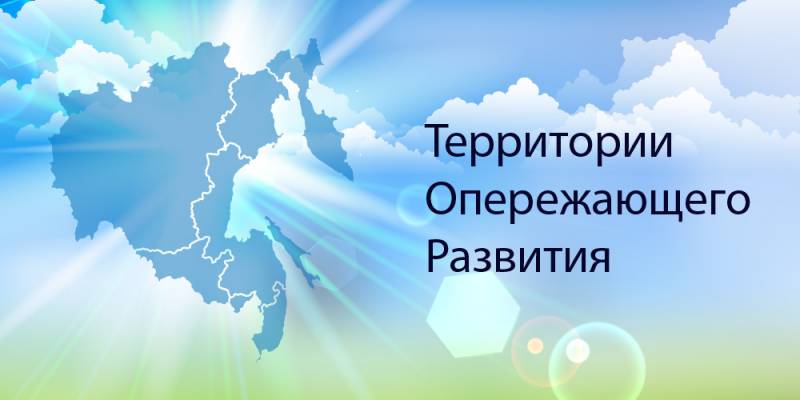 However, publications on the topic of TOER still appear in various media and in the Internet space. And, bearing in mind what was said once "A", I decided to say "B", but after conducting some investigation on the topic "Who benefits from the appearance of a TOER and how (if that) to deal with it."

In general, with the TOER from the very beginning of the emergence of the ideas are already fighting. Public figures, scientists and economists. Boldyrev Yu.Yu., Saveliev A.N. ("Great Russia"), Filin V.I. ("For nationalization and deprivatization ..."), Kulikova N.V. (NP "Board of Analysts"), Sivkov K.V. (Academy of Geopolitical Problems), Parshev A.P. ("The Party Cause"), Lisovsky Y.A. (“For the Revival of Russian Science”), Myamlin KE (Institute of High Communitarianism), Kuryanovich N.V. (“Russian Union of All People”), Stepanov F.E. (Expert Center "Strategic Management and Policy").

In their opinion, the law was adopted without broad public discussion and economic justification, as well as taking into account the views of the regions. Moreover, it violates the Constitution of Russia.

Open joint-stock companies and their private subsidiaries are being created, which receive at their disposal the entire territory of priority development zones. And along with the territory they get all the natural resources of these zones, as well as real estate.

Zones are practically exempt from taxes, labor is delivered there without restrictions. Foreigners are allowed to extract and export minerals, hydrocarbons, cut down forests, fish, shoot animals in any quantity and without compensation for damage.

Under the banner of "advanced development", those who disagree want to see the surrender of national wealth in private foreign hands. Allegedly, the population is replaced and the distribution of natural resources. In this case there is no talk about the construction of any production of finished products.

The charges are very serious, it makes sense to figure it out.

To date, nine territories of advanced socio-economic development have been created in the Far East. They decided to start from the Far East, as from a region requiring increased attention.

I propose to get acquainted with the collection of information on all nine TORs, and then to draw conclusions as to how these zones correspond to what their opponents put forward.

"Khabarovsk". Area 587 ha. The main direction - transport and logistics, metallurgy. During the implementation of projects in these territories 3 thousand jobs will be created.

"Nadezhdinskaya". Area 806 ha. It will specialize in the development of transport and logistics services, processing industry, etc. 1,6 thousand jobs will be organized.

"Priamurskaya". Occupies territory in 857 ha. A cement clinker processing plant with a capacity of 142 thousand tons per year, a refinery, and a large logistics center will be built here. The implementation of projects will create about 1,5 thousand jobs.

"Belogorsk". The area will be 702 ha. The main direction is agriculture. The construction of a soybean processing plant, a feed mill and a bakery plant is planned. In the course of project implementation, 700 jobs will be organized. By the way, the bakery has already earned.

"Industrial Park" Kangalassy " It is being created on the territory of the capital of the Republic of Sakha (Yakutia), on land plots of almost 17 ha, and will have industrial specialization. It is assumed that by 2018 there will be 13 factories operating here: for the production of ceramic blocks, paints and varnishes, plastic pipes, dry building mixes, etc. 350 more jobs will appear.

"Beringovsky" (specialization - mining industry) will be created on the territory of a group of coal deposits in the Anadyr district and the city of Anadyr in the Chukotka Autonomous Region. The area of ​​TORA will be almost 6 thousand hectares. 450 jobs will be organized. Processing is expected to 50 million cubic meters. meters of gas into diesel fuel and gasoline, which will ensure the needs of the Chukotka Autonomous Region for energy resources and abandon the Northern delivery of petroleum products.

Kamchatka. The area will be 2,2 thousand hectares. A tourist-recreational cluster, modern industrial-industrial complexes will appear here, and in the future - a transit container port for accumulating and sorting containerized cargo during transportation along the Northern Sea Route. About 3 thousand jobs will be organized.

So what do we see? And we see the following picture. For its objectivity, it is worth to divide the TORs into three categories.

1. Industrial and logistic. 6 TOROV. Their total area is 3179 ha. And the implementation of these projects will create 10 150 jobs.

2. Agriculture, mining, tourism and so on. That is something that requires large areas. Their area will be 11 350 ha and will employ almost 6 thousands of people.

And now let us remember what the area of ​​the subjects of the Federation, on whose territories these TORs are located.

Let me remind you that one square kilometer is 100 hectares. Accordingly, the TORA will occupy an area in 145,29 square. km What is the total area in 1 416 581 sq. km even to calculate the percentage does not make any sense.

Obviously, the mass land surrender do not understand who it is. As well as the fact that foreign workers will flood the land. 16 of thousands of jobs is not so much, in principle. However, for regions where the employment situation is catastrophic, this is a great relief.

Of course, in the Primorsky and Khabarovsk territories it is quite possible to attract the work of the same guests from abroad. But this is a matter of domestic policy, and putting it at the proper level will not be a problem.

“It’s not difficult to guess that these territories stand out for“ our Chinese partners. ”It is supposed that the Chinese will come to us, and they will develop our lands for our money. And we will also get taxes to the treasury from all of this.

Since we are realists, and we have been following the situation for a long time, we understand what it really becomes - into a predatory squandering of our minerals, our resources - for the benefit of the neighboring country. We will only have scorched and shattered land - as it was left by Chinese farmers who have barbarously exploited the leased fields. "

I agree with him only on the very last point. Yes, Chinese farmers have proven far from the best. However, where are Chinese farmers, and where is the mine in Chukotka?

In addition, the TORA Act states that:

Article 4. Financial support for the deployment of infrastructure objects of the territory of advanced socio-economic development

1. Financial support for the deployment of infrastructure objects of the territory of advanced socio-economic development at the expense of the federal budget, the budget of the constituent entity of the Russian Federation and local budgets, as well as extrabudgetary sources of funding.

2. Obligations of the Russian Federation to finance the deployment of infrastructure facilities of the territory of advanced socio-economic development can be fulfilled by:

1) contributing to the share capital of the management company, one hundred percent of shares owned by the Russian Federation and which provides funding for the placement of infrastructure objects of the territory of advanced socio-economic development ...

How the Chinese "will come and take everything", to be honest, in the light of the law is absolutely not clear. In accordance with the words of Miamlin, the Chinese would be able to get what is given to the use of the companies participating in the TOR, on 100% owned by the Russian Federation, China should at least become a subject of the Russian Federation. And this, as you understand, from the field of jokes.

In general, any project has those who support it, and those who are against it. And opponents do not always choose the honest path of struggle. Distortion of facts, "crooked" quotes, frank hysteria. To understand why Myamlin (he is simply the most active) associates are so protesting against TOR, there is simply no desire. And that's why.

The best confirmation of the conclusion that the Torah is not such a perilous idea for Russia, I received on the Irkutsk city portal irkutskmedia.ru. There were several materials on the creation of TOR in the Irkutsk region. And, by the way, the Irkutsk people expressed their discontent. Very much expressed.

That such things in Irkutsk.

Conclusion: TOR - a kind of lifeline for those regions where development actually slowed down more than one year ago. Regions that need to not just develop, which is necessary to start saving.

None of the documents studied (and I had to study it fairly) did not find even the slightest evidence that the development of the regions was planned at the expense of imported labor. Only allegations of incomprehensible "experts" and "scientists."

None of the documents found confirmation that the lands and enterprises will be settled at the expense of some foreign investors, to which they will later withdraw. On the contrary, the mention of the words "federal budget" was more common than anything else. Yes, “other” methods and methods are allowed by the letter of the law, but the federal budget was so choked up that it was necessary to believe. As well as I had to believe that no foreign company would be allowed to manage these TORs.

So, the Torah is not an attempt to surrender Siberia and the Far East to anyone else, as Mr. Myamlin wants to prove, but an attempt to restore what was actually lost during the years of "democracy and restructuring." Yes, democratically rebuilt. Now it is necessary to recover. How much mutilated and sold for nothing.

Yes, in our very difficult and very meaningful time, you need to carefully look three times at the one you are listening to. It seems to be a patriot of Russia, but in actual fact it is not either Filin, not Myamlin ...

Ctrl Enter
Noticed oshЫbku Highlight text and press. Ctrl + Enter
We are
Results of the week. "What kind of noise, but no fight ?!"Situational analysis of the death of the MH17 flight (Malaysian Boeing 777), made on the basis of engineering analysis from 15.08.2014
Military Reviewin Yandex News
Military Reviewin Google News
30 comments
Information
Dear reader, to leave comments on the publication, you must to register.